Three controversies with racial overtones took place recently: tensions between coloured and black people in Siqalo in Mitchells Plain; the debate about renaming Cape Town International Airport, which reminded us of the racialised language between coloured and African populations in the province; and comments made by the leader of the Economic Freedom Fighters about Indian racism.

One group condemned the politics that might be explicit or lying in wait in the references to being coloured or Indian. For this group, referring to coloureds as the new incarnation of first nations or Khoi conceals a racism toward Africans at best and, at worst, are identities being mobilised by charlatans, chauvinists and political entrepreneurs masking opportunistic interest in the language of justice.

READ MORE: Stop calling us ‘coloured’ and denying us our diverse African identities

Then there is a more popular view, which considers these expressions legitimate — that the coloured population was marginalised in post-apartheid South Africa, and that coloured is an identity that should be replaced by more affirmative cultural self-descriptions, such as Khoi or Griqua. Regarding Indians, some insist that there is a large breyani pot of truth behind the claim that they are racist toward Africans.

But these views require a historical context so that we can see where they come from.

As both victims and beneficiaries of apartheid’s policies of divide and rule, the predicament of those classified as coloured or Indian needs to be historically located in colonial practice and seen as a legacy of the past. Manifestations of coloured or Indian racism are less causes of a problem than they are consequences of that colonial past.

Rather than think of this politics as exceptional to South Africa, these are predicaments that have faced certain population groups after occurrences of decolonisation across the world, particularly in Africa.

By the late 19th century colonials had learnt the hard lesson that a united native population was a threatening spectre.

The result was a policy pioneered first in East Africa, then in West and Southern Africa, of first dividing the local population to better rule them and, second, to co-opt local political leaders and refashion local customs, so that these leaders become the indirect rulers of the colonial state.

If local populations had different cultural identities, these were now transformed into either racial or tribal identities. Tribes were “given” certain territories that became their homelands, where they lived under customary law administered by chiefs anointed by the colonial administrators. Cultural identity was turned into political identity, according to Ugandan scholar Mahmood Mamdani in his book Define and Rule.

To be a “native”, classified as “indigenous”, was to be defined as an ethnic subject of a particular territorial-administrative unit. But some states went even further. Zimbabwean historian James Muzondidya has noted that colonial Rhodesia further distinguished between an “aboriginal native”, and a “colonial native”. An aboriginal native was an ethnic subject defined as belonging to that particular territory and therefore having certain rights of access to land and so on. But “colonial natives” were different: they lived on the land but did not belong there. They were “ethnic strangers”, mainly migrants from places such as South Africa.

But across the continent there were also categories of populations who did not fit neatly into this classification of settler and native. They were categories of people not defined as ethnic; like the Europeans, they were classified as “races” in colonial law. Colonial thinking said some races came from elsewhere, therefore they were not indigenous.

These groups have been called “subject races” by Mamdani. They were used as intermediaries between the Europeans and those seen as “indigenous” tribes; they were elevated above the “native” but kept well below the European. The result was to produce a double resentment towards them: they were held in contempt by those who ruled over them and by those over whom they held petty authority.

The decision to co-opt the coloured population in the Cape was a tactical decision of the colonial powers. An attorney general of the Cape in the early 1900s remarked: “I would rather meet the Hottentot at the hustings, voting for his representative, than meet the Hottentot in the wilds with a gun on his shoulder.” 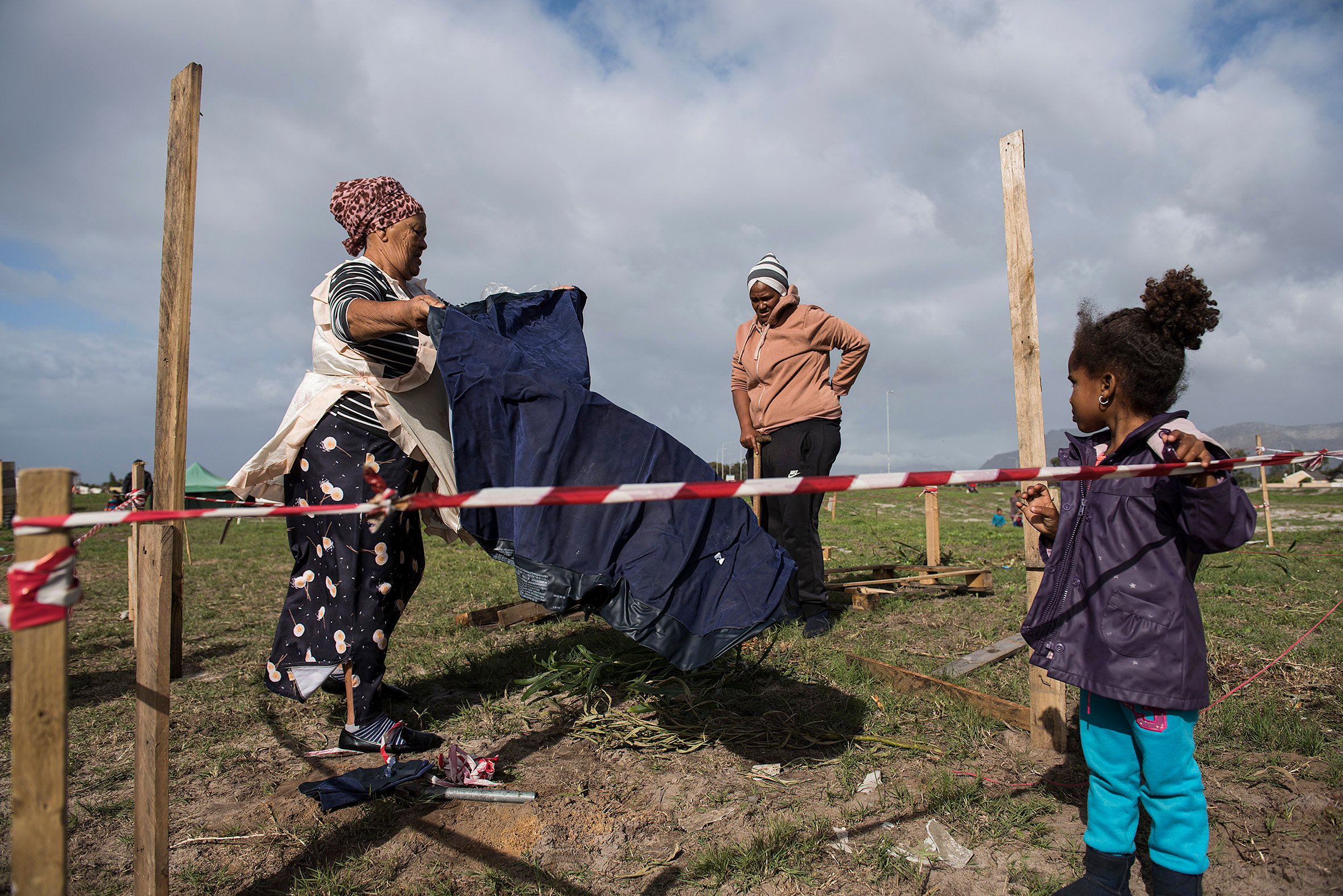 Skewed history: People in backyard shacks in Parkwood, Cape Town, illegally occupied a field in May. Other areas where housing is in short supply saw racial tensions between coloured and black people being stoked by organisations claiming they are the Cape’s First People. (David Harrison)

Prime minister Barry Hertzog’s policy on voting for the coloured population in the Cape in the Pact government of 1924 was motivated by his observation that: “It would be very foolish to drive the coloured people to the enemies of the Europeans — and that will happen if we expel him — to allow him eventually to come to rest in the arms of the native.”

Anthropologist WM Eiselen, a close ally of apartheid prime minister Hendrik Verwoerd, summed up this vision in 1955: “Briefly and concisely put, our native policy regarding the Western Province aims at the ultimate elimination of the natives from this region.” By natives, he meant black Africans, who would be defined as belonging to a tribe and therefore belonging in a homeland elsewhere.

In the Cape a deliberate policy of social engineering designed to co-opt the coloured population was put in motion by the Influx Control laws: the Coloured Labour Preference Area Policy. The policy was systematically implemented over a few decades. In the first phase, as Eiselen pointed out, there would be “the removal of foreign Africans and freezing of the number of African families, coupled with the limited importation of single migrant workers to meet the most urgent needs”.

In December 1965, black labour regulations were introduced, designed to end long-term contracts for black African labourers in the Cape, so that they would not get passes to work in the city. The law stipulated: “If an employer wishes to employ an African, he is required to obtain a coloured labour preference clearance certificate from the Department of Manpower, stating that no suitable coloured person is available to fill the position.”

The predicament for coloured and Indian populations today is not dissimilar to the predicament that subject races such as the Fulani, the Omani Arabs or the Tutsi faced across the continent after independence: during colonialism they were the beneficiaries of certain policies designed to co-opt them and prevent a united opposition emerging among the colonised, but they were also victims of colonial segregation and subjugation.

It is a tragic reality that the designs of the colonial state have come to be seen as the natural order of things by many today as market-based inequalities that intensify stereotypes and prejudices.

In the name of justice, after colonialism many states reversed the colonial order in the name of Africanisation and redistributive justice: ethnic subjects are now the most eligible for redress, and racial subjects are last in line. This has given rise to some new conflicts.

No wonder that some Indians in Kenya and Uganda campaigned recently to be classified as a tribe. After the Asian expulsions of 1972 in Uganda, many realised that races continue to be seen as foreign but ethnicities are seen to be indigenous; a colonial logic reproduced by the postcolonial state.

That many think it natural that there should be a coloured or Khoi majority in the Cape reflects perhaps badly on a post-apartheid education system that has not made us all more aware of how the coloured Labour Preference Act worked to expel Africans from the Cape, and what its intentions were: divide and rule.

Undoing this legacy today must draw strength from a history of continuous resistance by those who united against the Hertzog Bills, the Koornhof Bills and the co-option strategies of the Tricameral Parliament in the past.

Among the lessons we should draw from the decolonisation experience in Africa is that we need both a new concept of justice and a new concept of difference. That means breaking with the reactive logic that the last shall be first, and the first shall be last. We need a concept of difference that does not use one’s past to decide whether one belongs and has a political future. One that allows us to embrace the multiple historical routes through which all find ourselves in this particular post-settler, post-colonial society — as locals, as descendants of slaves, of indentured labourers, of traders, exiles and refugees or those who came here in the hope of making a better life.

We need a pan-African concept of difference that remains open to inviting new migrants to become citizens. The challenge is to imagine a future with difference, with economic justice, but without racism.

Suren Pillay is associate professor in the Centre for Humanities Research at the University of the Western Cape, where he also leads a research project on the politics and history of citizenship and belonging