It’s got the fixings of the real thing. It looks like the real thing. The players on court belong to the National Basketball Association (NBA) and the fans are trigger-happy with their applause.

Most of them are decked out in classic basketball paraphernalia — team caps, sneakers of every colour and style and NBA jerseys. Some bear the names of new-school players, now outdated LeBron Heat and Cavaliers strips are littered throughout, but it’s the old-school legends that dominate — Kobe, Jordan, Magic.

The Spalding ball racks are loaded and, naturally, the Gatorade cups next to the court and players’ benches runneth over. There’s even a jumbotron in the centre, and hip-hop songs blare through the speakers. A Kiss Cam and large foam thumbs would not be misplaced in this setting but, thankfully, neither is here.

A healthy number of media personalities and celebrities are present. Loyiso Gola, AKA, Da LES, Cassper Nyovest (the halftime entertainment) and, of course, any socially acceptable “spectacle” would find it remiss if Pearl Thusi was not in attendance. All this ensures that social media is full of event coverage.

On the basketball front, NBA legends Kareem Abdul-Jabbar and Congolese-born Dikembe Mutombo are the recognisable faces of the league, supported by other non-player favourites such as Toronto Raptors president Masai Ujiri and sports analyst Ros Gold-Onwude.

The week leading up to the game was filled with basketball camps and a house-building initiative. NBA Africa’s vice-president and managing director, Amadou Gallo Fall, told the Mail & Guardian that this is core to the organisation’s mandate. “The main objective is to reassert our commitment to Africa from an NBA perspective, to grow the game across the continent, first at grassroots level.” 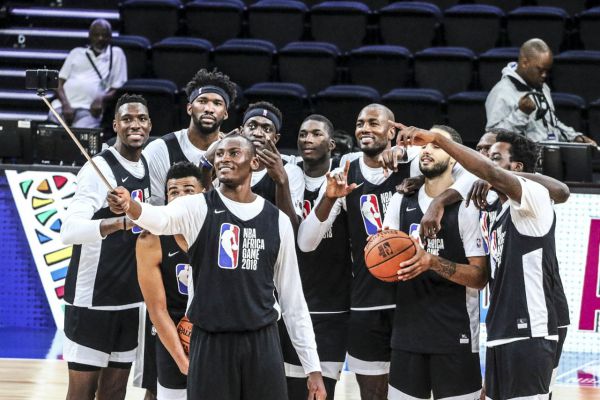 It’s not clear whetherthe fans know that or whetherthey’re more interested in seeing Cameroon-born Philadelphia Sixers’ centre Joel Embiid in real life. The 8 500-seat Sun Arena at TimeSquare in Pretoria is nearly sold out, with fans paying anything between R265 and R2 555. It’s asmall price to get a live version of the NBA experience they have watched manytimes on cellphones, tablets, computers and television screens.

Team World’s players are introduced to friendly applause. Team Africa’s introductions follow, getting much louder acclamation. The screams are loudest for Embiid and Congolese-born Toronto Raptors power forward Serge Ibaka. Every player in Team Africa was either born on the continent or has a parent who was (a total of 25 players in the league fall into this category). They’re ready to win a victory for Africa, in Africa.

Before the official game tip-off, the lively voice of Scoop Makhathini announces that everybody should stand for the anthems — the United States’ Star-Spangled Banner, the anthem of the African Union and, lastly, South Africa’s Nkosi Sikelel’ iAfrika.

The game itself is slow. There seem to be more clumsy turnovers than one would usually expect. The quarters are 10minutes long, as opposed to the standard 12 of the NBA. But the game is taking place during the players’ off season and the American summer holidays. The teams are also a mishmash of available talent, rather than an iron-clad team carefully selected on the basis of physicality and chemistry.

The crowd is forgiving. The few times one of the players is able to finesse themselves past a defender and make an exuberant dunk are met with boisterous reactions from the crowd.

Maybe it’s enough just to be seeing that 2m-tallNBA player you’re obsessed with making a bucket right before your eyes.

And that’s the appeal of this exhibition game. For once, we get to see the players doing what they do in our own backyard.

For Team Africa, this backyard advantage isn’t enough. As on the past two occasions the match was held, they go on to lose. Last year, it was by a score line of 109-97. This time it’s a narrow 96-92 loss.

And, with the growing presence of players with an African heritage in the NBA, things could swing in favour of a local win in the coming years. NBA commissioner Adam Silver told journalists in Rosebank, Johannesburg, last week that “we are now at an all-time high in terms of African representation. And, of course, that includes many of our very best players.”

Their value as a brand to the NBA — and the success of this match — has pushed the association to look at creating a pan-African basketball league.

Silver said: “The arena infrastructure is not yet in place, I think, to support a fully fledged league, but I think, as we look out over the next decade in Africa and we look at the economic development, the number of strong economies, the enormous interest in basketball, we think there is a real opportunity to do something like that.”

For the players, the NBA on the continent also seems to be a positive experience. Everyone volunteers their time and no commission is paid.

“It’s a chance of a lifetime … all of us are happy we came and feel really blessed,” San Antonio Spurs small/power forward Rudy Gay said of the experience, echoing many of the players’ sentiments about how the NBA Africa Game embodies a cultural awakening of sorts.

Even the biggest names have shown an interest. Silver mentioned the tantalising possibility of LeBron James, the NBA’s current top player, coming and playing in the game.

“I know it’s something that’s high on his list of priorities. I don’t want to put undue pressure on him. I am sure at some point he is going to make that trip.”

All that stands in the way, according to Silver, is James’s own success, which means his season lasts nine months a year, because he has played in the NBA Finals for much of the past decade.

So perhaps we’re only a few scheduling conflicts away from welcoming the King to the continent. Imagine the pandemonium that would ensue.

Until that day comes, it’s safe to say the appetite for NBA exhibition games on home soil is healthy.