The bridge that binds Lagos together

Lagos — At midnight on August 23, the Third Mainland Bridge in Lagos was closed for three days to allow engineers to assess its structural integrity.

Lagos nearly came to a standstill, adrift without its major artery, which regulates so much more than just traffic. Commuters who braved it were forced to use alternative routes that added hours to their journeys; many just stayed at home. Additional closures may still come, as the city anxiously awaits the results of the assessment.

The significance of the Third Mainland Bridge to daily life in Lagos cannot be overstated.

There are three bridges that link the two islands of Lagos to the mainland. Of these, the Third Mainland Bridge is by far the biggest and busiest: 11.8km of grey concrete that snakes its way over the Atlantic from one end of the city to the other.

To traverse the bridge is to experience the many faces of Africa’s most populous city, along with its many contradictions: the tranquil ocean waters lapping up against the floating wooden homes of the Makoko slum, one of the most densely inhabited areas in the world; the lush sprawl of Lagos University; the long line of ships waiting patiently to dock at Apapa port; the Marina’s glittering 21st-century skyline.

Commuters have plenty of time to admire these views. The traffic on the Third Mainland Bridge is legendary, particularly during peak hours in the morning and evenings. At its worst, the journey can take four hours — a straight-line speed of three kilometres an hour. An hour is more common.

Travellers going to the airport are warned to avoid travel on the first Friday of each month, when the city’s faithful hit the road to connect with the Lagos/Ibadan Expressway to attend their monthly vigils.

Not just a bridge

For the city’s population of 20-million-plus, the state of the bridge and the traffic jams that pile up on it is always factored into how people plan their schedules and arrange meetings, or decide whether to meet up with friends, or even where they choose to live and work.

It is not just a bridge — it is part of the fabric of the city. But that fabric may be wearing thin. 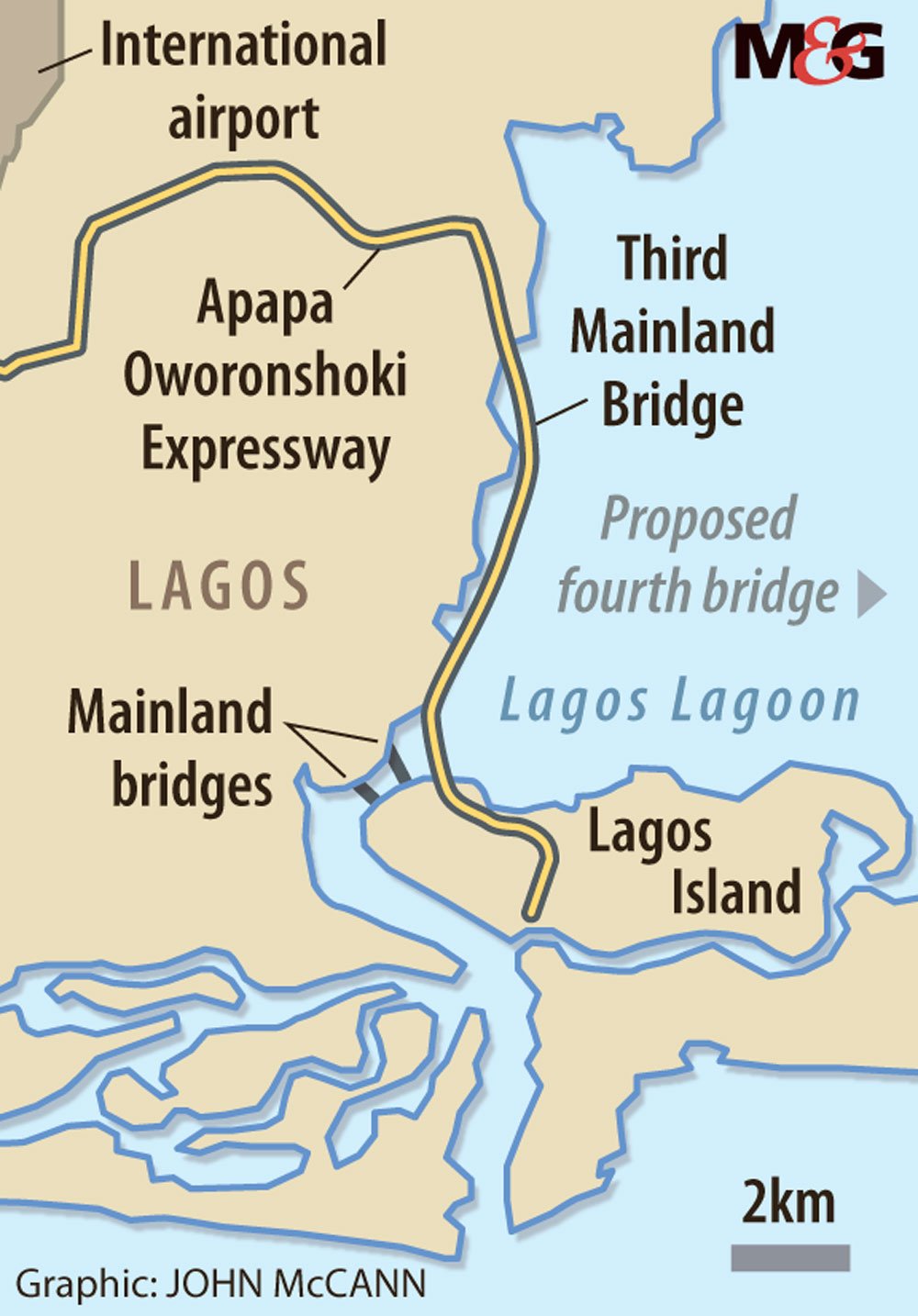 Even to casual observers, the bridge is in poor shape: potholes require constant attention and the uneven tarmac makes cars dance up and down on supposedly flat stretches of road.

“When engaging in repairs for your home, you need to take a look at what needs to be worked on before you begin working on it. In like manner, the closure of the bridge to assess for repairs was necessary,” said Kayode Anwo, a structural engineer.

The results of the assessment have yet to be released but it is expected it will prompt further and longer closures, either later this year or early next year. These closures may be several months long.

Alternative routes — especially the smaller Eko and Carter bridges — already suffer from their own traffic jams and are woefully ill-equipped to pick up the slack.

Despite the huge inconveniences to come, the government has been praised for taking proactive steps to maintain the bridge and prevent it collapsing.

“Nigeria is notorious for its horrible maintenance culture. Virtually all amenities built by successive regimes at the federal level —airports, seaports, police and military barracks/bases, roads, railways and what have you —are in deplorable conditions due to our inability to maintain them when due,” said an editorial in the Vanguard newspaper. “The Federal Government’s thoughtful concern for the integrity of this iconic bridge, which is a major tourist attraction in Lagos (the nation’s economic capital and financial powerhouse), is commendable and should continue irrespective of regime. The mind boggles at what will become of the metropolis and the nation’s economy if something untoward happens to this bridge.”

The Third Mainland Bridge was built in 1990 for a price tag of $1-billion. At the time, it was Africa’s longest bridge but has since been supplanted by Cairo’s 6th October Bridge. It was intended to alleviate Lagos’s congestion problem, which was already severe, and had forced the city to adopt radical policies to regulate traffic on the two existing bridges.

As Anwo recalls: “We had what we called the odd and even system. Cars that had odd numbered plates would be allowed to move to the island on Monday, Wednesday and Friday while those with even number plates on Tuesday and Thursday.”

The new bridge helped but the relentless growth of Lagos meant that congestion in the city only got worse. City planners are still coming up with radical ideas to ease the pressure.

One is to bypass the bridges with a system of cable cars — the Lagos Sky Bus — which expects to offer 12-million daily commuter trips by 2032. But financial constraints have repeatedly pushed back construction, which is now tentatively scheduled to begin in the third quarter of 2019. Similar delays have plagued the construction of a new light rail network.

Another idea is to make better use of waterways — 25% of Lagos is covered by water, after all. There are a number of commuters who already use “banana boats” to cross from the islands to the mainland and vice versa. But they are largely unregulated and slightly more expensive than shared taxis. Besides, boat passengers still need to seek another means of transport — perhaps a motorcycle or a shared taxi — when they arrive on the other side. To make water transport safer and more efficient, local government authorities are opening up new jetties at key locations, with the intention of making Lagos a “water city” by 2028.

For now, however, Lagosians remain almost totally reliant on its gridlocked road network to get around — and on the Third Mainland Bridge to keep the city together.