Twelve years — that’s how long we have to make fundamental changes to the way we do things. Fail and, by 2030, the world will be locked into the worst of climate change.

In Southern Africa, we have already had a taste of the worst. By 2040, nowhere will be safe. By the end of this century, life will be terrible for everyone.

This isn’t the dramatic language of journalism seeking sensationalism. It’s the conclusion of a major United Nations report on climate change, titled Global Warming of 1.5°C. It was put together by 91 scientists from 41 countries, looking at 6 000 science reports and taking in 42 000 public comments.

Their work is the result of a compromise reached during the 2015 Paris Agreement, according to which every country agreed to do what it could to keep average global warming below 2°C this century. The world has already warmed by 1°C since the Industrial Revolution.

As a rule of thumb, warming is double on the African continent. African countries and island states wanted the goal to be 1.5°C. Developed countries wouldn’t accept this, but they agreed to the UN’s Intergovernmental Panel on Climate Change producing a report on what it would take to get to a 1.5°C goal — and what would happen if it was breached.

The 91 scientists (a handful are from South Africa) concluded that the world has to change at a scale with “no documented historical precedent” to stay within this goal. Greenhouse gases — which come from cars, power stations, fires, fridges, air conditioners, electrical insulation, deforestation and so much more — have to drop by 45% in 12 years and 100% by 2050.

Governments have kept delaying action (an agreement to tackle climate was almost signed in 1989). Put together, the current plans by all governments will mean the world will warm by 4°C this century. Children today will still be alive then.

Generally, the country will get drier in the west and wetter in the east. Fynbos and succulent Karoo ecosystems will disappear under the expanding Kalahari desert. Cape Town won’t be safe from this shift. The Stellenbosch wine region will be too hot for grapes. People in Johannesburg and Pretoria will have to live through summer days that regularly reach the 40s. 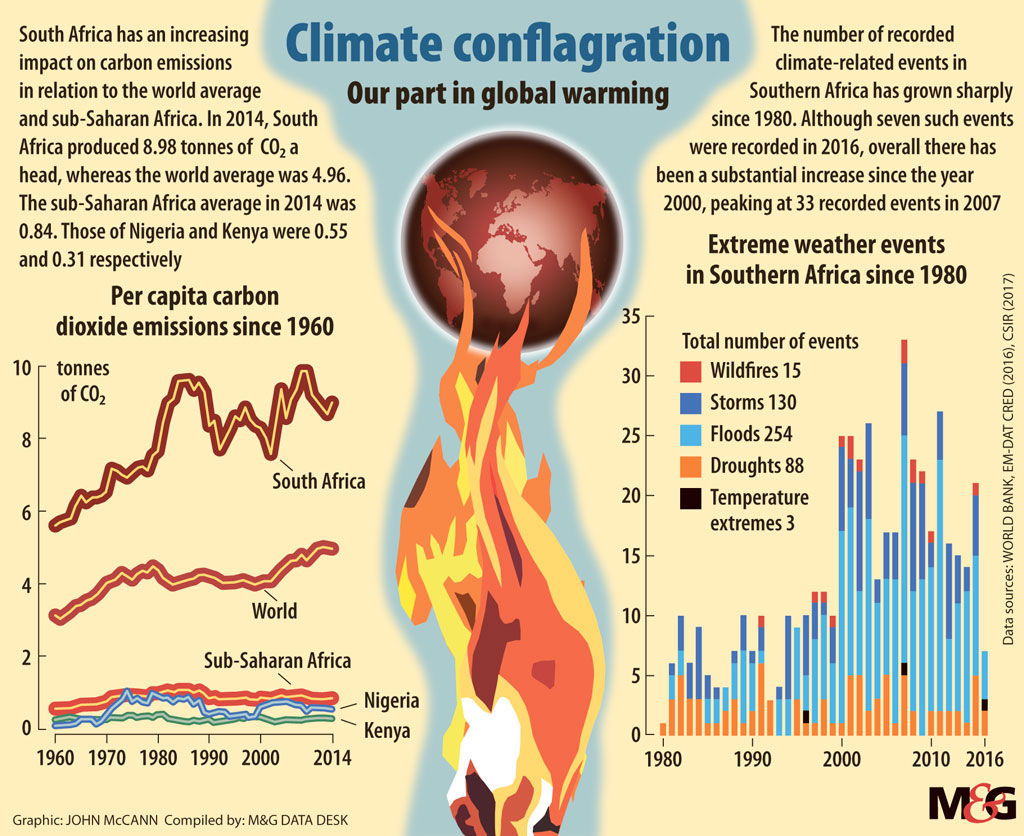 Higher temperatures will mean more fires that release more CO2 and burn down forests. When it does rain, it will come in violent storms and with hail, which will wipe out crops. Food will become more expensive.

But there is a whole load of hope in the Global Warming of 1.5°C report. Enormous change must take place but the technology and plans exist to make it happen. All these changes, such as shutting down coal-fired power stations and moving to green energy and electric vehicles, will reduce carbon emissions and, with less pollution, make life better for people.

With each fraction of a degree being so important, individual action will make a difference.

The klaxon has been sounded. It’s now in our hands.

The United Nations report, Global Warming of 1.5°C, charts three ways for how this century could unfold. This is a summary of the three scenarios.

We save the day

In South Africa, summer is hotter and rain falls in shorter and more violent bursts. But smarter cities protect people from heat waves, water is put at the heart of the economy and there’s enough to go around.

Overall, things get worse, particularly for poor people, who have less of a buffer for when things go wrong. For the middle class, life is comparable to what it was in 2020. But things are nowhere near as bad as they could be.

Countries don’t do much to tackle carbon emissions. Accelerated warming in the 2020s — as a result of natural increases and human-driven warming — leads to droughts, crop failures and fires. An emergency summit is held in 2025, where governments agree to actually do something. But the changes have to be much more dramatic than they would have been in 2018. This costs money. Renewables quickly replace other forms of energy but temperatures continue to rise. By 2040, coral reefs have all but vanished and tropical forests are shrinking. The ecosystems that protect many coastal communities from the worst of the ocean, such as mangrove forests, are gone and those people have to move inland.

The scale of transformation required means large tracts of farmland are turned over to biofuels. Food prices rise, “driving elevated levels of food insecurity, hunger and poverty”. Crop yields decline “significantly” in the tropics, leading to “prolonged famines in some African countries”. In response, people decide that food is more important than biodiversity. Game reserves and wild areas are turned into farms and animal “extinction rates increase greatly”.

By 2100, warming is brought back to 1.5°C. The cost has been high and the world is now dominated by humans because of species reduction. Nation states are only just hanging on; “migration, forced displacement and loss of identity are extensive in some countries”.

“The health and wellbeing of people generally decreases from 2020, while the levels of poverty and disadvantage increase significantly.”

Despite all their pledges, countries opt out of reducing carbon emissions. By the 2030s, a sequence of El Niño and La Niña kicks in. Major floods and heat waves hit every continent. Food production globally plummets and food prices increase. Large ecosystems — coral reefs, wetlands and forests — are destroyed. Powerful hurricanes wipe out coastal cities.

Panicked, the countries responsible for the most emissions at last start doing something. Energy prices soar. Global average temperatures increase by 3°C. Young and old people die in heatwaves, and fires and floods wipe out food crops. South African cities are too hot to live in.

“The world as it was in 2020 is no longer recognisable, with decreased life expectancy, reduced outdoor labour productivity, and lower quality of life in many regions because of too-frequent heat waves and other climate extremes.”