Nakuru — On October 25, a bus driver lost control of his vehicle along the Kisumu-Muhoroni highway in Kenya. The bus plunged down a slope, and was ripped in two. Fifty-eight people out of an estimated 70 people died. The maximum capacity of the bus is 50 people and there are no seatbelts for those who stand in the aisle.

This incident was a wake-up call for the Kenyan authorities, who are notoriously lax about implementing road safety laws. So far this year, 2 585 people have died on Kenya’s roads, making accidents one of the leading causes of unnatural death in the country.

Unsafe buses and minibus taxis, known as matatus, are the primary culprits. Now Kenya is trying to rein them in — and not for the first time.

Fourteen years ago, the Kenyan Traffic Act was passed. Popularly known as the Michuki Rules, after former transport minister John Michuki, the Act lays out common-sense rules that apply to all vehicles used by the public.

These include: all drivers must observe road signs and stop at red lights; vehicles should never be overloaded; there should be enough seatbelts for every passenger; speed governors must be installed; two drivers must be used for journeys longer than eight hours to prevent fatigue; and vehicles must have the necessary insurance.

When the Michuki Rules were first introduced they had an immediate positive effect. Within 100 days, the accident rate had declined by 74%. But when Michuki left office, enforcement of his rules relaxed and Kenyan drivers returned to their dangerous habits.

Now authorities are cracking down again. Internal Affairs Minister Fred Matiang’i and Transport Minister James Macharia have vowed to enforce the Kenyan Traffic Act strictly, giving owners of all vehicles used by the public just three weeks to comply with regulations. Those three weeks expired on Monday and many buses and matatus were taken off the road. Police made 2 500 arrests, and impounded vehicles. Some disgruntled matatu owners kept their vehicles off the road in protest.

For many passengers the long-term safety gains were offset by short-term pain: getting around suddenly became more difficult. Many commuters had to walk to work, some were left stranded and others rushed on to overcrowded trains, causing a new safety hazard.

Lucy Kamau, who was travelling to Kisumu from Nyeri in central Kenya for the burial of a close friend, had to stop her journey in Nakuru because she could not find a matatu or bus going to her destination. “It’s sad that I will never get another opportunity to say goodbye and pay my last respects to my friend,” she said. 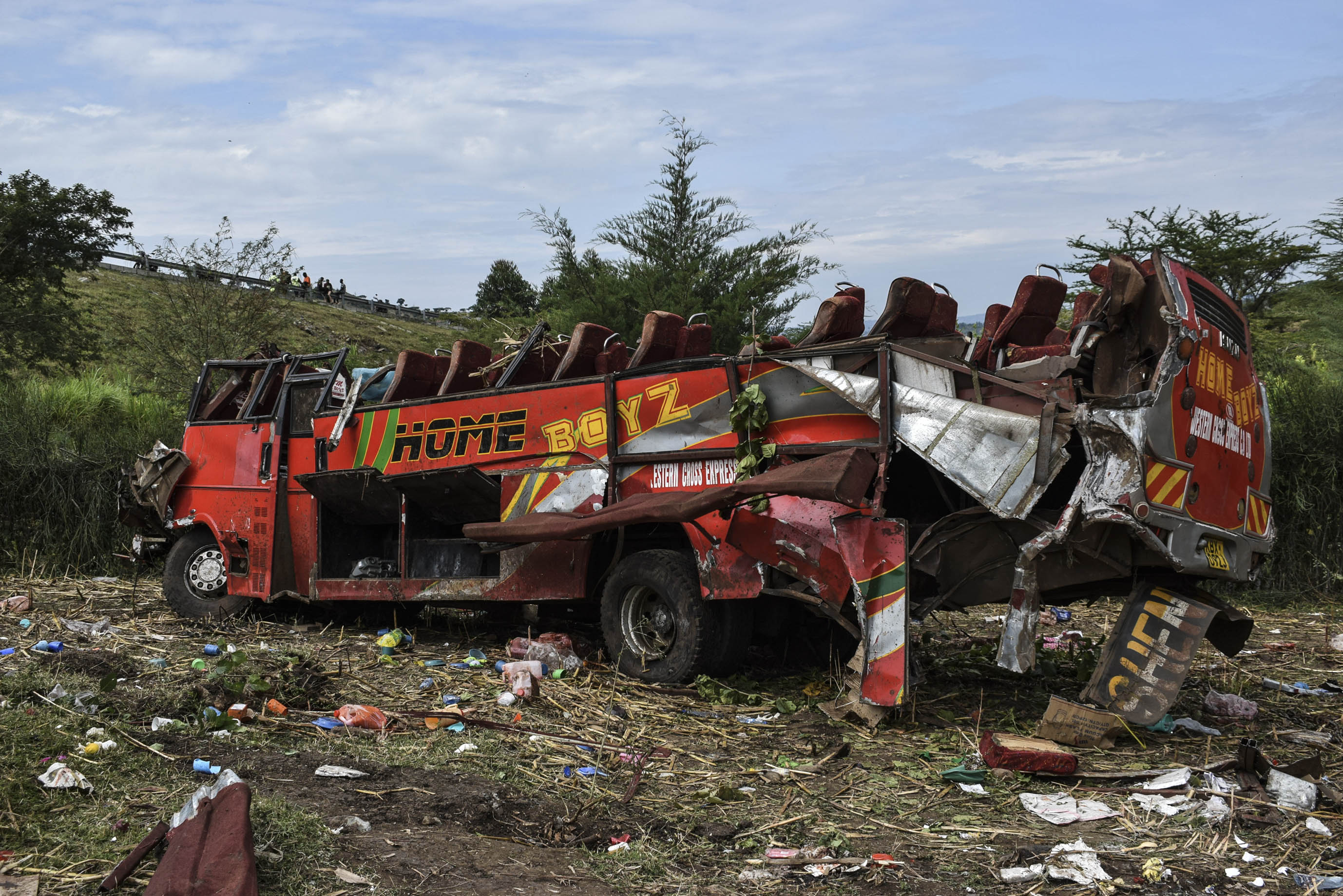 The crackdown has been prompted by the high number of deaths on Kenya’s roads, such as the bus accident in Kericho, western Kenya (below), in which 55 people died, including nine children. Fifteen people survived. (Brian Ongoro/AFP)

The matatus that did remain on the roads took advantage of the situation. On Sunday, it cost R50 to get from Nakuru to Nairobi. That’s the normal price. By 4am on Monday morning, that had risen to R99. By midday, it was R213. Most customers accepted the inflated prices because they were happy to get to where they needed to go.

Motorbike taxis, known as boda-bodas, are also profiting from the crackdown on their main competition.

“Business has been booming for the last two days,” said Peter Wanjohi, a boda-boda driver in Nakuru. “I went home with $100 on Monday and about $55 on Tuesday, an amount that I have never bagged since I started this job a year ago. I hope the crackdown continues, as it’s now our time to eat.” Wanjohi admitted to overcharging customers who were frail and weak, including those who needed medical attention and had to be rushed to hospital.

“It’s business. It’s been very hard on us for the last few months. With the increase in fuel prices and a sinking economy, it is very hard to take a substantial amount of money home. God has finally shone on us,” he said.

Simon Kimutai, chairperson of the Matatu Owners Association, is less pleased. He said the ongoing stand-off between government and matatu owners is costing the industry 400-million Kenyan shillings (R55-million) a day, and that the rules governing matatus are outdated and need to be reviewed. He also said that, before the government cracks down on matatus, it needs to rein in corrupt cops who make running buses and taxis so expensive.

Although most Kenyans are optimistic that the enforcement of the Michuki Rules will improve the country’s abysmal road safety record, some argue that passengers themselves also have a responsibility to take safety into account.

“I still don’t understand why someone would board a full vehicle. Or why no one raises his voice when they see a cop being given a $1 bribe. We believe that it is not our responsibility to stop accidents,” said pharmacist Joseph Kamau, who is from Nakuru.

Prisca Muthoni, a businesswoman based in Rironi, about 20 minutes from Nairobi’s city centre, said it was about time that rogue matatu drivers and conductors learnt their lesson. “They are very rude and unkempt; they should be taught how to handle passengers. I’m especially disappointed [about] the high number of cases of people who have died from being thrown out of a moving vehicle as a result of having less bus fare.”