More than six months after the City of eThekwini closed its only needle exchange programme, negotiations between the city and the project’s staff continue. Each day the project remains shuttered, workers say, is another day that puts people who use drugs —- and the public — at risk.

Until May, TB/HIV Care ran the city’s sole needle exchange programme that provided drug users with items such as clean needles and sterile water for mixing and injecting drugs to help prevent them from contracting infections linked to dirty needles or water. This kind of harm-reduction programme has been shown to cut HIV prevalence by almost half in just three years among British users, a 1995 study in the journal AIDS found.

The city shut the needle exchange project down in January and blamed TB/HIV Care for the more than 50 needles and syringes that washed up on Durban beaches after a freak wave. City authorities claimed the incident was proof that the organisation is unable to collect and dispose of the needles it hands out. This, they argued, made the project a public health risk and put it in violation of city bylaws.

But the organisation’s data shows that 70% of the needles TB/HIV Care hands out to drug users are returned. There is no evidence, however, that any of the 5 000 needles given to diabetic patients at the nearby Wentworth Provincial Hospital each month are returned, a 2012 South African Medical Journal study revealed.

TB/HIV Care had planned to reopen the project last week, but a city report has set out conditions the programme must meet before it can go ahead, a researcher at the Durban University of Technology and technical advisor to TB/HIV Care, Monique Marks, explains.

Community meetings were held on 5 December to discuss the project’s reopening.

South Africa’s national HIV and TB plan says programmes that reduce the harms associated with drug use — such as needle exchange projects — should be available to all people who use drugs. The plan hopes to expand opioid substitution therapy (OST) by 2022 — but even if the country reaches this target, fewer than one percent of people who use drugs will have access to the programme, which allows drug users to use legally-prescribed medication as a substitute for illicit drugs. The medicine doesn’t get people high but it does stave off withdrawals, allowing some people to transition off illegal drugs.

OST helps to decrease illegal drug use, overdose deaths and new HIV infections among people who use drugs, a 2011 study published in the Bulletin of the World Health Organization, has shown.

Watch this man’s amazing transformation after he kicked heroin with the help of opioid substitution therapy:

Our Dylan Bush followed Marco for almost a year and captured his amazing transition off drugs with the help of Pretoria’s OST project.

But for the past six months, drug users in Durban have not been able to access the clean needles that could help them avoid HIV and hepatitis infections.

One patient, who has Hepatitis C and is HIV positive, said that she had been forced to share needles with a partner since the project closed.

“I put my partner at risk every time we use,” she told TB/HIV Care.

“I’ve been using two needles for over a month,” said another patient.  “Using a blunt needle has caused some of my veins to collapse. I’m afraid I will end up using someone else’s needles.”

He explained: “I worry I might have to resort to crime in order to obtain clean needles and equipment.”

The organisation has also had to stop collecting dirty needles and educating people on how to dispose of them safely, Best says. 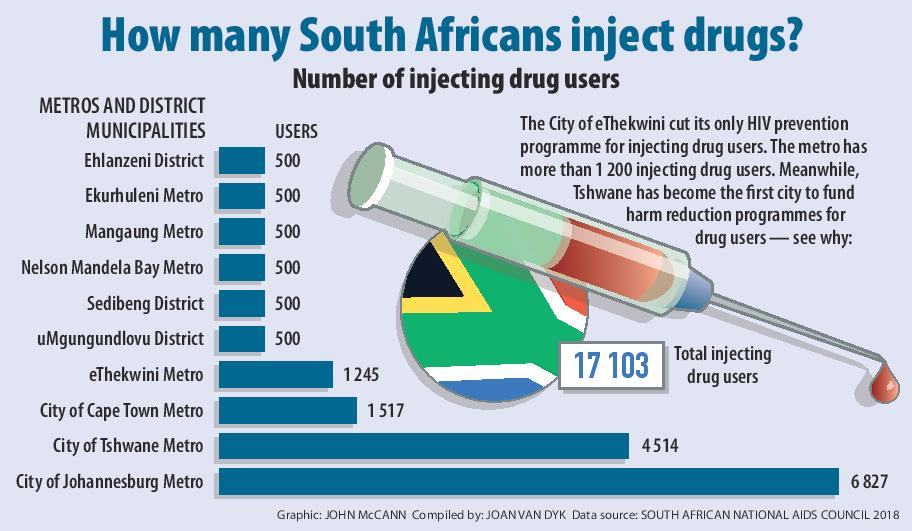 Meanwhile, recent media reports have bemoaned the increase of needles on Durban’s beaches. But it’s no coincidence, Best argues.

“It is likely there are many more needles being disposed of inappropriately now than before the needle and syringe programme was stopped.”

The City of eThekwini did not respond to Bhekisisa’s requests for comment.

Previously TB/HIV Care was adamant to see its project up-and-running by last week, but a city report has set out conditions the programme must meet before it reopens, a researcher at the Durban University of Technology and technical advisor to TB/HIV Care, Monique Marks, explains. For instance, eThekwini is demanding that the nonprofit organisation brand its needles so they can be distinguished from those used at public health facilities. Additionally, people who use drugs will only be eligible for a clean needle if they return a used one at the same time.

TB/HIV Care is still weighing up options on how to best meet the demands, and it remains unclear how they will pay for the changes — or whether their donor, The Global Fund to Fight Aids, Tuberculosis and Malaria, will foot the bill.

“We are still exploring ways of making our injecting equipment identifiable. It may come at an additional cost,” Best says.

Marks says months of strained negotiations with the City of eThekwini have been trying but ultimately may have proved to many public servants that needle exchange programmes work. But their education has come at a cost to the health of the city’s drug users — a community the South African National Aids Council estimates to be more than 1 200 people.

“The struggle continues, we’re not at the end yet. Both groups want a more caring city, where needles and syringes aren’t on the beaches. But the opposite has ­happened,” she says.

“We warned them. They just didn’t listen.”

New mayor for Durban, at last