Code red: Why provinces are forced to outsource ambulance services

Just 1971 state ambulance vehicles are on the road nationally, a Bhekisisa survey reveals.

Health department guidelines say there should be at least 5 700 ambulances in operation — or one for every 10 000 people, according to standards quoted in the KwaZulu-Natal health department 2017 annual report. But with less than 2 000 actually functioning, there are only enough state emergency vehicles to cater for about a third of the population, data from provinces show.

A May audit of provincial health departments by the Treatment Action Campaign (TAC) found shortages of ambulances and emergency medical services (EMS) personnel in several provinces.

In response, Bhekisisa requested the latest EMS vehicle and personnel numbers from all nine provinces. The Gauteng, North West, Western Cape, Mpumalanga, and Eastern Cape health departments responded, and the national health department provided figures for the remaining provinces. Overall, the majority had less than 300 working ambulances and a third reported fewer than 100 on the roads. KwaZulu-Natal reported the highest number of functional emergency vehicles at about 500.

In the absence of EMS, many South Africans continue to pay out of pocket to hire transport to take sick loved ones to hospital during emergencies —some people in the Eastern Cape pay as much as R800 to hire cars from neighbours.

“For those who are unable to pay for these services, they have no option than to wait for an ambulance, which either takes hours to arrive or does not arrive at all,” the TAC report explains. The organisation also recorded cases in which some people in KwaZulu Natal had been forced to walk 13km to seek emergency care.

In 2015, the South African Human Rights Commission (SAHRC) held hearings on the state of EMS in the Eastern Cape after receiving dozens of affidavits from rural community members who said emergency medical services were nonexistent in their areas.

At the commission, Nophumzile Khunqwana from Mpoza Village in the province’s north recounted her daughter Aphiwe’s first pregnancy, which nurses cautioned was high risk because of the 19-year-old’s high blood pressure.

“She [started] experiencing birth pains … we immediately called an ambulance and we were told that the ambulance was in Mount Ayliff [60km away]. It was 4pm. Four hours later, the ambulance had still not arrived and my daughter was in terrible pain.”

Khunqwana eventually agreed to pay a neighbour R500 to take the pair to Madzikane Ka Zulu Memorial Hospital. There, doctors said they would need to deliver the baby by caesarean section but could not operate because Aphiwe’s blood pressure had led to severe swelling. They would have to wait until this subsided, nurses said.

The ambulance Khunqwana had requested from home arrived at her village eight hours after the original call.

Her mother argued: “If the ambulance response time was not so atrocious, my daughter may not have lost her child.”

The SAHRC concluded that the Eastern Cape health department had violated residents’ constitutional rights to health by failing to provide adequate EMS care. In a 104-page report, the commission called upon the provincial government to achieve a fleet of 667 ambulances by March 31 2021, about 60 vehicles short of what the TAC argues would be needed in the province.

But, the Chapter Nine body’s recommendations are not legally binding.

The national health department did not escape the commission’s scrutiny and was tasked with reviewing EMS standards, including prescribed ratios of ambulances to patients, taking into account factors such as the geographical size of provinces and the number of public- sector patients. The SAHRC also launched an investigation into the state of EMS services nationwide. 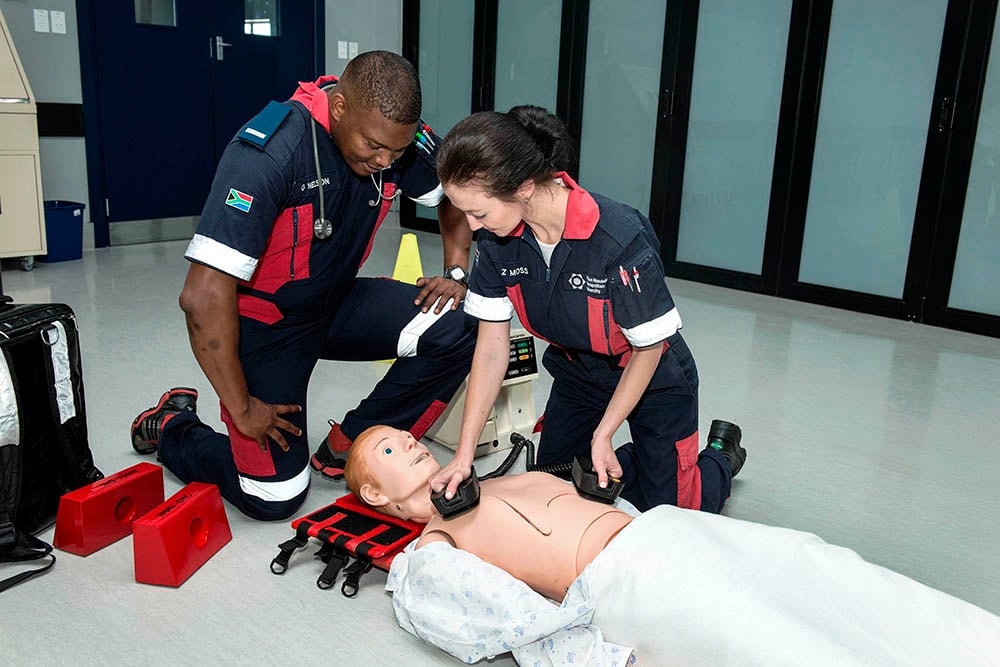 In its investigation, the publication Spotlight alleges that, between 2016 and 2018, the North West health department spent R129-million from funds ringfenced for HIV programmes on two private companies, including Buthelezi EMS.

In April, Minister of Health Aaron Motsoaledi also asked national treasury to investigate the contracts between Buthelezi and the North West and Free State health departments.

Speaking to Spotlight, Motsoaledi was adamant that he had opposed the Free State contract and is against the outsourcing of ambulance services.

Treasury confirmed to Bhekisisa that the investigation is still ongoing and could not say when it was likely to conclude.

The Hawks are also looking into the contracts, Spotlight reports.

Almost half of the provinces told Bhekisisa that they were experiencing shortages of EMS staff. In Limpopo, about half of all EMS positions are vacant. When the TAC asked the province what it was doing to fill these posts, the health department replied that it was trying to recruit new personnel and was training five existing staff to become paramedics, according to a written reply seen by Bhekisisa.

National TAC Chairperson Sibongile Tshabalala says that the government needs to hire and train more people and the end contracting-out of ambulance services.

“Government needs to stop outsourcing its emergency services. You cannot outsource a critical department like ambulances,” she says.

“Outsourcing means that government is paying three or four times more than what they were going to pay. This is an unnecessary expenditure, which is why EMS is in a dire state.”