Mine leaves farmers in the dust

Every morning Siphamandla Nkosi is greeted by the grim sight of grey mine dumps that tower into the sky about 500m from his peach-painted homestead perched on a hill in Nkolokotho in KwaZulu-Natal. “I’m disturbed spiritually when I see those mine dumps,” Nkosi says with a shrug. 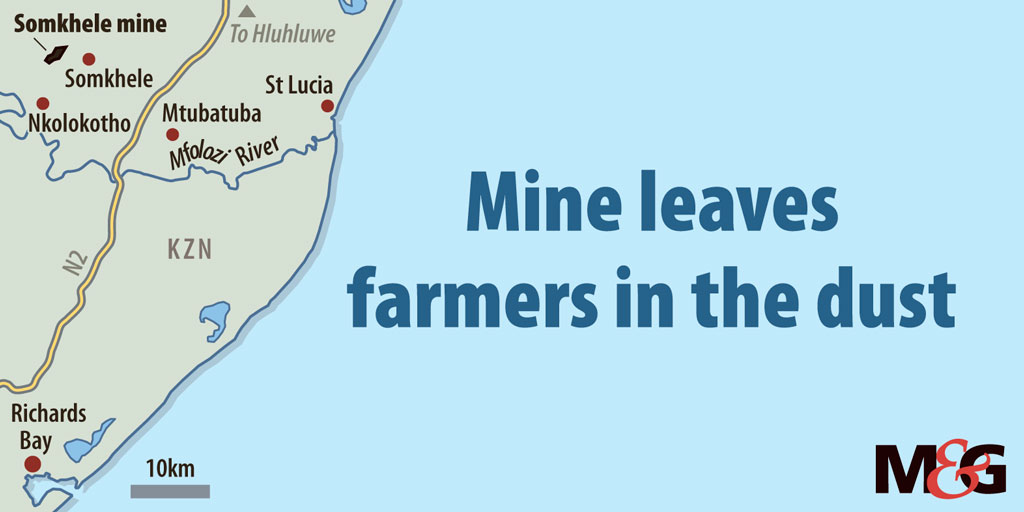 In a different time, before the scramble for minerals turned the earth here upside down, he had a different view: tract upon tract of sugarcane and maize fields alongside homesteads that dotted the landscape as far as the eye could see.

Nkosi remembers how, as boys, he and his friends herded cattle and ran in the fields down there where the mine dumps keep rising. Then, there were about 50 households. Now there are none.

“We can no longer keep cattle. People are sickly and the blasting from the mine is causing a lot of dust. There is a lot of noise and dust and the environment has been disturbed. The mine brought us nothing good. That is why we engaged a lawyer to fight for us,” he laments.

In an effort to save what remains of their land and retain their traditional way of life, the community has been involved in a lengthy legal battle with Tendele Coal Mining Pty (Ltd), which owns the Somkhele Mine.

Organised under the Mfolozi Community Environmental Justice Organisation, which represents 4 000 people from 10 villages in the Somkhele area, residents are appealing a recent high court decision turning down their application to interdict Tendele from continuing its mining operations.

In their application before the high court in Pietermaritzburg, the Somkhele residents accused Tendele of violating their environmental, land and traditional rights, and said its operations contaminate water resources and negatively affect their way of life, which is based on crop and stock farming.

According to evidence submitted to the court, Somkhele has more than 50% of all open-pit mineable anthracite reserves in the country. Tendele is the principal supplier of anthracite and sells 730 000 tonnes a year to local ferrochrome producers.

The community’s lawyer, Kirsten Youens, says they are lodging an appeal with the Supreme Court of Appeal after Judge Rishi Seegobin dismissed their application with costs last month. Seegobin found the applicants had not presented a proper case and that they appeared to have adopted a scattergun approach, hoping to hit one target or another.

But, while the wheels of justice grind slowly, residents like Zephania Gina continue to face the daily effects brought about by mining. 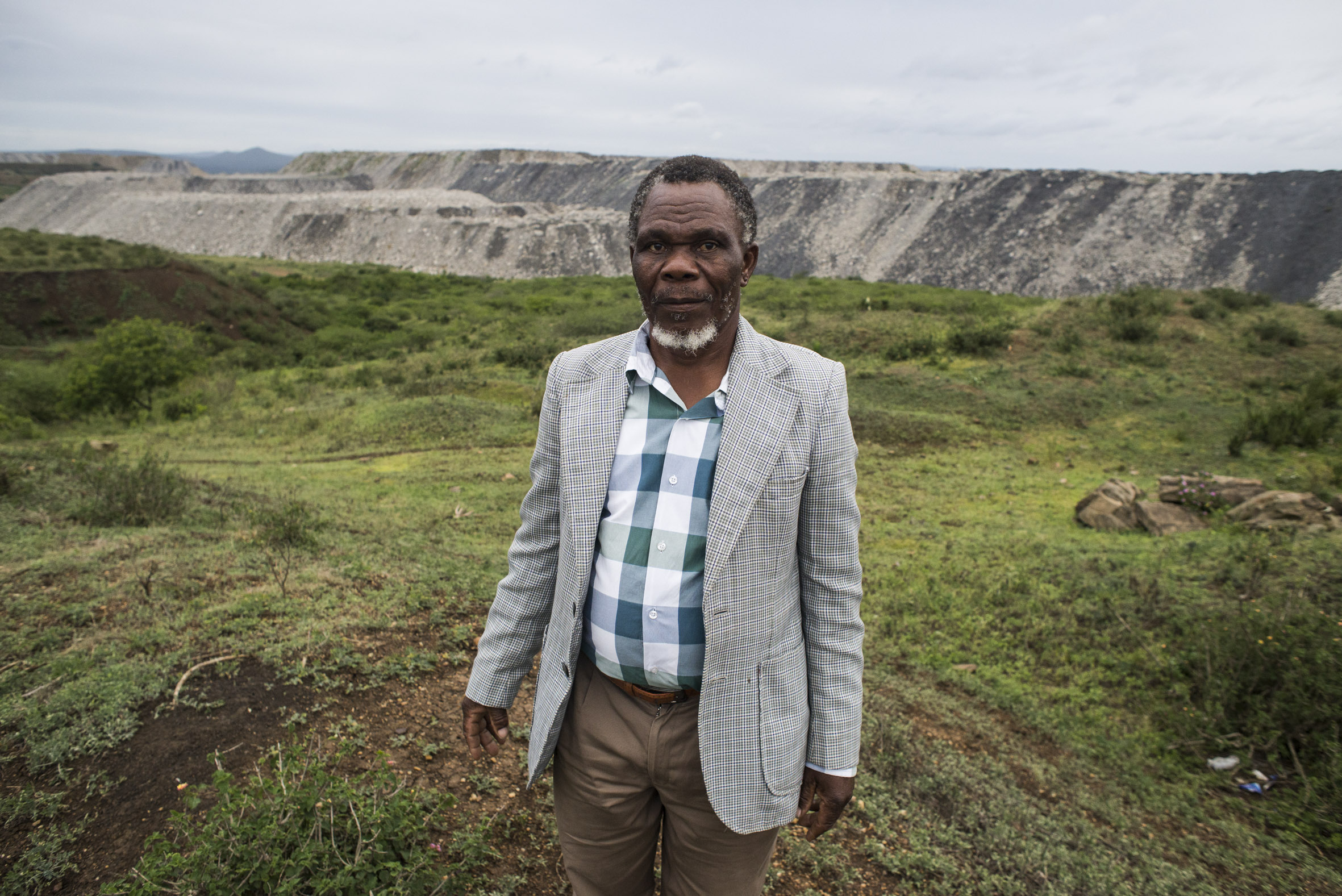 Ruined: Zephania Gina, 72, shows where the homestead where he was born once stood (Delwyn Verasamy)

He stands on the ruins of what was once his parental homestead where he was born 72 years ago. Overlooking the dumps in the north, pieces of cement bricks and portions of broken walls lie half-buried at his feet — in the soil matted with green grass just sprouting after recent rains.

“We had milk and meat. We had land. We had everything. Now we are beggars,” says Gina, looking across to the dumps.

Gina’s homestead, which was located further down from Nkosi’s, was demolished to make way for the Tendele Coal Mine in 2008. His parental homestead met the same fate. He has built another home about 1.5km south of the original.

The family cemetery, where 27 of his kin, including his parents, five children, sisters and brothers lie buried, is fenced off not far from the ruins. He is worried the graves are under threat.

“When you bury someone, you need to sacrifice a goat and a cow to appease their spirits. If you want me to exhume them you need to do the same [sacrifice a cow and a goat for each]. But the mine doesn’t want to respect our traditions,” he says.

The exhumation and relocation of ancestral graves has been one of the burning issues in the battle between Tendele and Somkhele residents, who consider tampering with graves taboo.

In court, Tendele accepted responsibility for previously failing to comply with regulations before relocating graves. In his ruling, Seegobin said the company was now working closely with Amafa KwaZulu-Natal Heritage Council to ensure that any relocation of graves took place in accordance with the law.

The prospect of a lengthy legal battle brings no comfort to residents like Mbongeni Gumede. His homestead in Qhubuka lies about 300m from the Somkhele mine operation. The area around it is littered with the ruins of destroyed homesteads, testimony to the changing times and dynamics here. All his neighbours have accepted Tendele’s financial compensation and left the area.

Gumede remains the last man standing in the struggle. He believes the R75 000 offer allegedly made by Tendele is ridiculous. 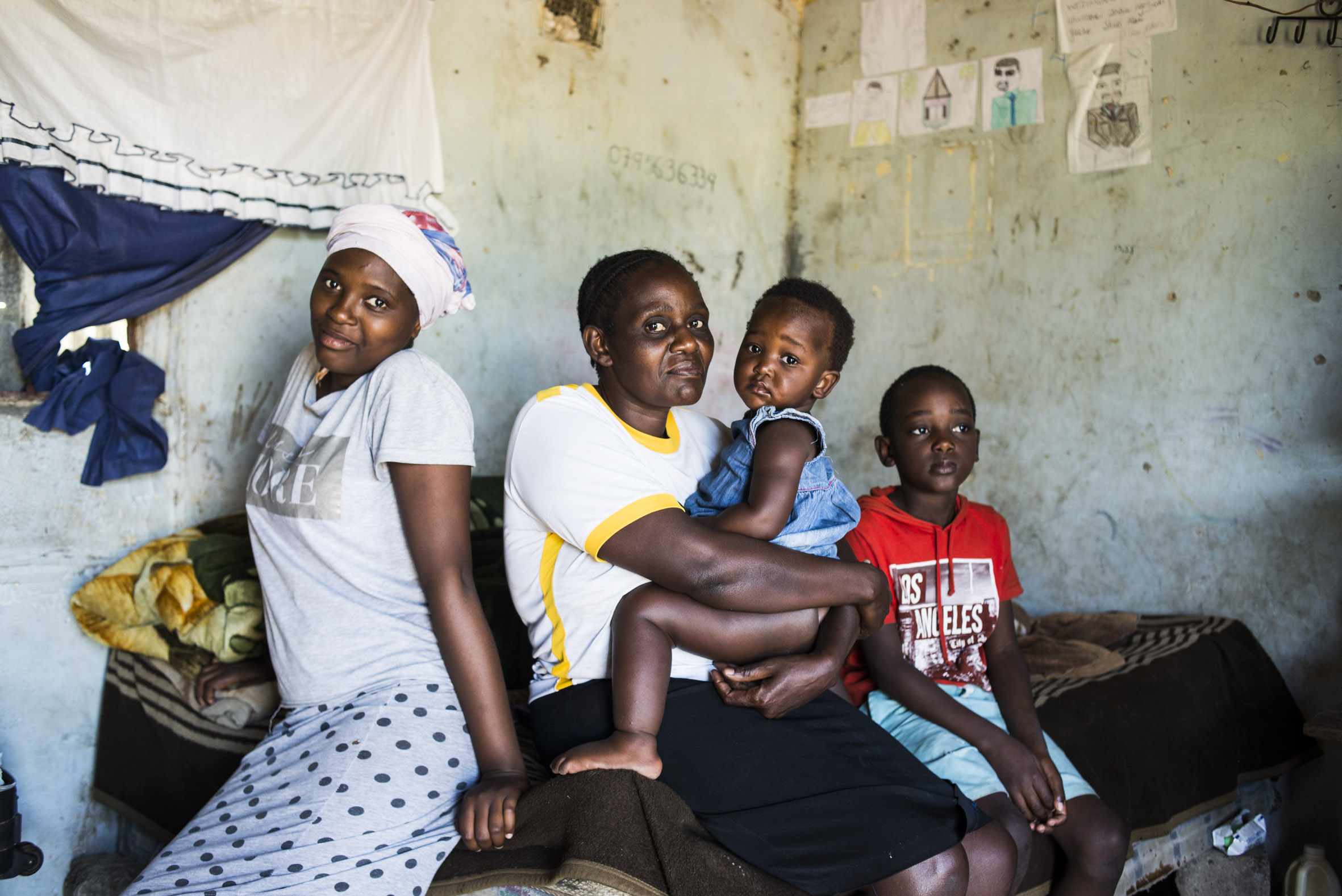 The Gumede family’s home in Qhubuka is 300m from the mine. (Delwyn Verasamy)

“We are struggling with dust, noise. I was born here and my children were born here. Eight of our houses have collapsed since mining started here. Before mining [started] we had no such problems,” says Gumede.

He says produce has deteriorated.

The leaves on the fruit trees on his property are caked in black dust.

Plumes of black and red dust rising from underneath the wheels of gigantic trucks and earth moving machinery also land on his roof, furniture, clothes and food.

He has to buy water because the taps have run dry, allegedly due to the mining. The rainwater they used to harvest from the roof is no longer drinkable because it is contaminated.

Added to this is the constant roar of trucks that traverse the main road above his homestead and in the mining area.

Mine security carry out patrols along the barbed wire fence separating Gumede’s home from the mining area.

“We have asked the mine [Tendele] to move us away from here. They refused, saying we are not in an area designated for removal. But look at my home now. I live in a ruin because of mining. We are all coughing in this house [as a result of dust],” says Gumede.

Gumede also lives in fear after he was harassed by unknown gunmen who warned him to “stop making noise about the mine”.

“If you speak out you could die,” he says about his terrifying encounter.

He has given up any hope of leading a normal life as long as he remains on this piece of land.

Tensions also brew among families, between those who are against and those in support of mining.

Desmond Mkhwanazi lives alone in Qhubuka in a two-roomed brick house across the main road to Hluhluwe and Mtubatuba, just under 1km from the mining operation. He had lived with his siblings and their children in their ancestral homestead. But tensions arose when the family was made a financial offer to relocate. They disagreed about the monetary compensation from the mine, resulting in him staying alone in his current home while the others built elsewhere and one of his brothers accepted a job from the mine.

“The mine has destroyed my life. I had a tuck shop, which supported me, and I even managed to buy a bakkie for my business. But, once the mine got here, my goats died and everything got worse,” he says.

He has tried to resurrect the tuck shop on his new property, but he cannot afford to complete the outbuilding needed for his business.

His family’s ancestral graves are located somewhere in the middle of the mine dump and he can no longer carry out sacred traditional rites there.

“Where those dunes are now was my home,” he says.

But a judgment at the high court Pretoria last month has given communities like Somkhele some hope. In a case between the Amadiba Crisis Committee and the Australian company Transworld Energy and Mineral Resources, Judge Annali Basson ruled that the mineral resources minister must obtain consent from the community, as the holder of rights on land, prior to granting any mining right.

She said, although the informal rights of customary communities were previously not protected by law, the community now has the right to decide what happens with their land. Amadiba had lodged an application to ask the court to give the community the right to say no to mining in their area.

The judgment may set a precedent so that communities like Somkhele have a say in how they want to use their land in the future.

But, until then, residents like Nokuthula Buthelezi continue to battle the negative consequences of mining.

A thick layer of black silt forms at the bottom of the white water tank placed at the corner of a house in her large homestead some 9km away from the mining operation.

“We can no longer drink this,” pouring the water into a bucket to demonstrate just how polluted it is. Although she lives far from the mine, the dust from the operation covers the roof of her home. Her goats have runny noses and give birth to stillborn kids. Her cattle also appear to have respiratory diseases.

“Have you ever heard of a cow coughing like a human being? This is what is happening here since this mining began. We are all going to end up like that,” she says. — Mukurukuru Media