When the famed meme and organic intellectual Hlaudi Motsoeneng, who had given a face to the decimation of the public broadcaster, was ejected from the SABC, many thought this would signal that it was finally turning a corner. But if we’ve been paying attention for these past 10 years, we know why no new dawn should be expected.

For the better part of this past decade, the fawlty towers at Auckland Park has been the set of one of our greatest national tragedies.

Ten years of encroachment and then total capture of the SABC by corporate and political elites has all but brought the SABC to its knees.

This follows a series of sensational populist decisions such as 70% “good” news, 90% local content, a ban on covering protests and the outright (and illegal) sale of this national utility to its single biggest competitor, MultiChoice Africa.

The SABC is broke, again. Catastrophically so. It’s only three months shy of not being able to pay salaries to more than 4 000 permanent and freelance workers.

Never mind keeping up with delivery on its huge yet unfunded public mandate to inform, analyse and reflect different views, and some of our favourite soaps — money-spinners for the SABC — have faced closure as a result of this latest cashflow crisis.

In a repeat of the 2009 drama, the board asked for a lifeline of R3-billion to keep the on-air lights burning and the electorate informed. Mindful of the desperation of the broadcaster’s situation, the board said retrenchment was the inevitable course to the future sustainability of the SABC.

Perhaps naively, or even emboldened by the newfound independence civil society groups SOS Coalition and Media Monitoring Africa (MMA) recently won for it in court, the board played the open hand it was dealt a little too soon.

The board is now inquorate and immobilised. The ninth minister of communications and the governing party have emerged as heroes among workers ahead of a general election promising jobs, economic growth and stable public institutions.

Even with the pressure the president has put on getting the board quorate again, this latest fallout doesn’t bode well for independent-thinking non-executive directors who understand the urgent need to restructure the organisation to adapt to the hostile market it operates in. At best we’ll get a moderately pliant board drawing sitting fees and keeping “retrenchment” out of its vocabulary despite the fact that as many as a third of all employees are managers, and substantially declining revenue.

But those of us who’ve seen this show before know exactly how it’s staged to end. One of treasury’s principal conditions to the government guarantee it extended to the SABC in 2009 was the substantial scaling back of the operation and the shedding of staff.

Putting any discussion of retrenchment into abeyance was Motsoeneng’s first order of business and, with the full backing of the Ben Ngubane board, he cut deals with unions that cheered him on as they deferred and then defied this and other crucial conditions for a sustainable turn-around.

Security of tenure and more wages became Motsoeneng’s primary currency to maintain his legitimacy in what had fast become a political power play with him in the starring role.

But someone had to pay for this pipe dream, and this is how MultiChoice came to capture and take control of the SABC, as was recently found by the Competition Commission after the bitter court battle championed by SOS and MMA.

To make good the illusion of a broadcaster in good health, the board, led by proven perjurer Ellen Tshabalala, backed Motsoeneng’s delivery of the SABC into MultiChoice’s hands for a meagre R500-million over three years. The marriage was officiated with much pomp and splendour by the bumbling professor, Mbulaheni Maguvhe. 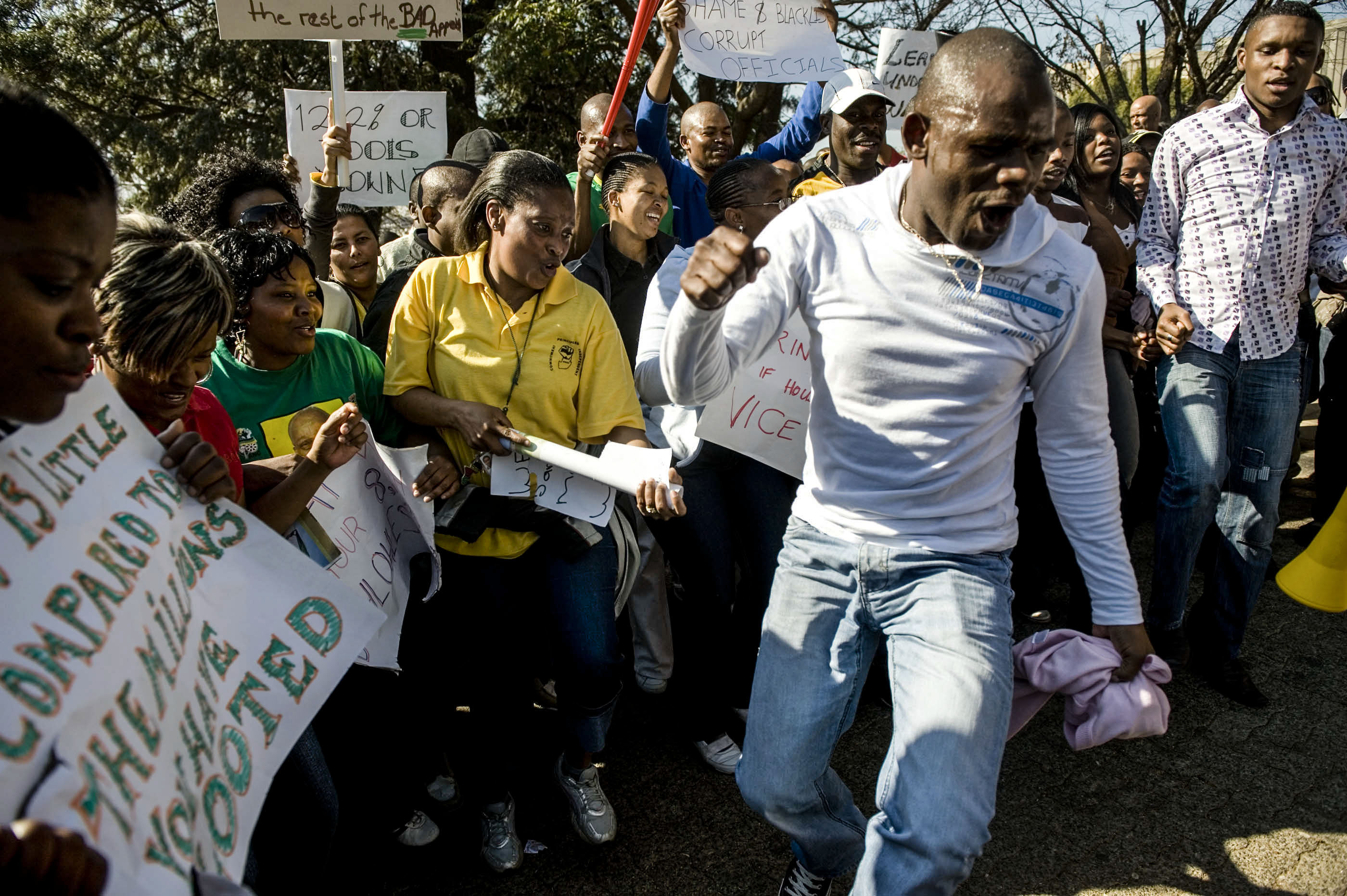 Financial and other troubles have plagued the public broadcaster for years. In 2009  employees protested for a wage increase. (Delwyn Verasamy)

In exchange, MultiChoice got exclusive control over the Madiba records in the SABC archives, which made up the entirety of the lucrative global DStv channel set up after Nelson Mandela’s funeral.

Worse yet, MulticChoice was given total control of the SABC’s policy on digital terrestrial television (DTT) encryption, preventing any broadcaster from competing fairly with the satellite broadcaster for access to premium content, or any subscription service ever hoping to compete for a share of the market in South Africa. That’s pretty good value and a secure future for MultiChoice, which was unbundled from mega-company Naspers and recently listed on the JSE.

The corporate creep and capture of our national public broadcaster didn’t suddenly happen out of nowhere. It happened right under our noses and in the care of the very same people who today claim to be its greatest champions.

It’s not just the delusional Motsoeneng who continues to recite the myth that he rescued the very SABC he destroyed. It’s the portfolio committee on communications, which gave us one politically expedient board after another and failed at exercising the appropriate level of oversight.

It’s at least eight out of nine meddling ministers of communications in nine years — Dina Pule and Faith Muthambi chief among them — directly interfering in the executive and operational affairs of the SABC and squandering a once-in-a-lifetime opportunity when DTT offered to breathe life back into our flailing broadcasting and attendant sectors.

It’s a president whose administrations, from 2008 to 2018, were characterised by nothing but greed and the active sale and collapse of the state. And it’s the tragedy of a once-proud governing party that not once but twice delivered him to us.

Pretty early in my own advocacy work to save our SABC, after yet another dispiriting SABC oversight meeting in Parliament, a former long-serving group executive of the public broadcaster took me into his confidence on the way to the lift, amused by the urgency of my youth and my desperate appeals for someone to do something.

“Sekoetlane,” he told me, “I’ve been with the SABC a long time. They come, they go, and I always remain. Do you know why that is?” “No, sir,” I responded. “It’s because I understand that nothing will change here, unless the whole system of appointing the SABC board is removed from party politics. So, when all of these things are happening and all of you are writing your statements, making noise, I just bide my time and I do my job.”

As I watch this repeat drama with dismay, I find myself returning to this cynical exchange in the narrow hallway to the lifts. It’s hard not to be cynical when the public institutions we rely on become the battleground for political elites.

And harder still when the chaos they leave behind gives ample opportunity for political careerists to cultivate names and positions for themselves, and aspirant rent-seekers to accumulate.

If we’re paying any attention to this latest spat over the public broadcaster, we would see that we’re not turning a corner or rising to a new dawn. It’s the same old horror story played by a new cast.

Meanwhile, the incredible workers at the SABC, who have been pummelled by instability and the ever-imminent loss of their livelihoods, wake up every day and go to work, biding their time and doing their jobs to keep us informed, educated and entertained through it all.

Sekoetlane Phamodi has worked on information and communication rights issues in various African countries, including in South Africa as national co-ordinator of the Save Our SABC Coalition