“Out of control.” It’s a catchy headline, even more so when it’s used by the usually conservative, grey-worded team at the World Economic Forum. The Swiss-based organisation has picked it as the title of the 14th edition of their Global Risk report.

Released annually, this sets out the biggest threats faced by humanity for the coming year, and into the future. It gets its data by sending a survey to a thousand people it deems clever enough to peer into the near future and pick what risks worry them the most. Their answers are then weighed up and put into a ranking system.

Traditionally, economic threats such as “asset price collapse” have dominated the list. But in recent years a mix of environmental disasters and the consequences of not doing much about climate change have started to dominate the list. These now make up four of the top five risks, by their likelihood.

The forum lists the risk report on its “essential reading list ahead of Davos”. That’s the annual meeting (networking session) of business leaders, politicians and journalists held in a frozen Swiss town, where people discuss how to run the world.

Use of weapons of mass destruction tops the list in terms of impact — because it would mean immediate and total destruction — but this isn’t seen as something that’s likely to happen this year. So the forum shifts its attention to the election of demagogues (our words) who promise quick solutions to complicated problems. 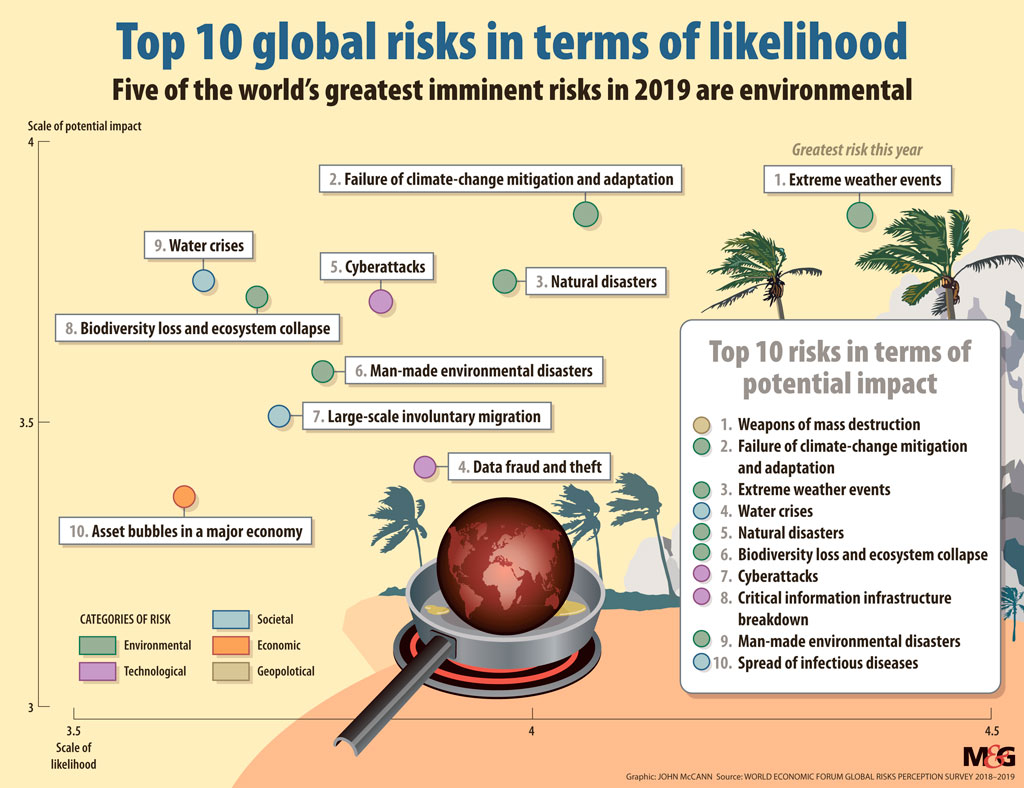 “Global risks are intensifying but the collective will to tackle them appears to be lacking. Instead, divisions are hardening.” This means energy is being spent on developments inside countries, “weakening collective responses to emerging global challenges”.

And this, the forum warns, is a real problem when climate change is increasing the number of natural disasters and requires a concerted global effort to limit carbon emissions.

Last October, the UN’s climate change body — the Intergovernmental Panel on Climate Change — released a report that looks at the difference between a world that warms by 1.5°C and one that warms by 2°C. Keeping warming down is the stated goal of the 2015 Paris Agreement, which every country in the world agreed to.

The world has already warmed by 1°C. The panel’s report warned that countries needed to do whatever they could to keep warming to 1.5°C — anything above this and island states will be eaten way by rising sea levels, and countries on the African continent will begin to fall apart as rainfall patterns shift dramatically and crops fail.

The UN’s panel said that carbon emissions need to drop by 40% in the next 11 years (by 2030) and then by 100% by 2050. Anything less than this and the world warms to a point where the most vulnerable countries struggle to survive, and then all countries start to fall apart.

The warnings from the UN are echoed by the World Economic Forum. “It appears increasingly unlikely that the world will meet even the 2°C upper limit identified by the Paris Climate Agreement.” Put together, the plans by every country in the world will see the world warming by 3.2°C.

With a fragmenting world and inaction on climate change, the forum concludes that: “We are drifting deeper into global problems from which we will struggle to extricate ourselves.”