At times chaotic, at others comical, the race to lead Africa’s biggest economy is never boring

Lagos — His name is Jubril al Sudani, they said. The real president is dead. A clone, an impostor imported from Sudan, has been running the country for months.

That was the rumour that made the rounds late last year, laid to rest only after Nigerian President Muhammadu Buhari was forced to make a statement promising that he had, in fact, not been cloned — although, as the conspiracy theorists noted, that is exactly what the clone president would have said.

The rumour was alarming and made international headlines, but Nigerians took it in their stride. Considering the timing, this is expected: it is how you know general elections approach in Africa’s biggest economy and most populous country. With less than one month to go, such wild accusations have become all too common, and discussions about the merits of the various candidates are ever more heated.

Come February 19, 75-year-old Buhari, the incumbent, is due to run again under the banner of the ruling All Progressives Congress (APC), an alliance that helped him to a comprehensive victory in 2015.

His biggest challenger is Atiku Abubakar, the opposition People’s Democratic Party (PDP) candidate. Both are Muslim and from Nigeria’s predominantly Hausa-Fulani north. Atiku (72) has a track record in government: he was vice-president during former president Olusegun Obasanjo’s two-term tenure. This is his fourth attempt at the top job. 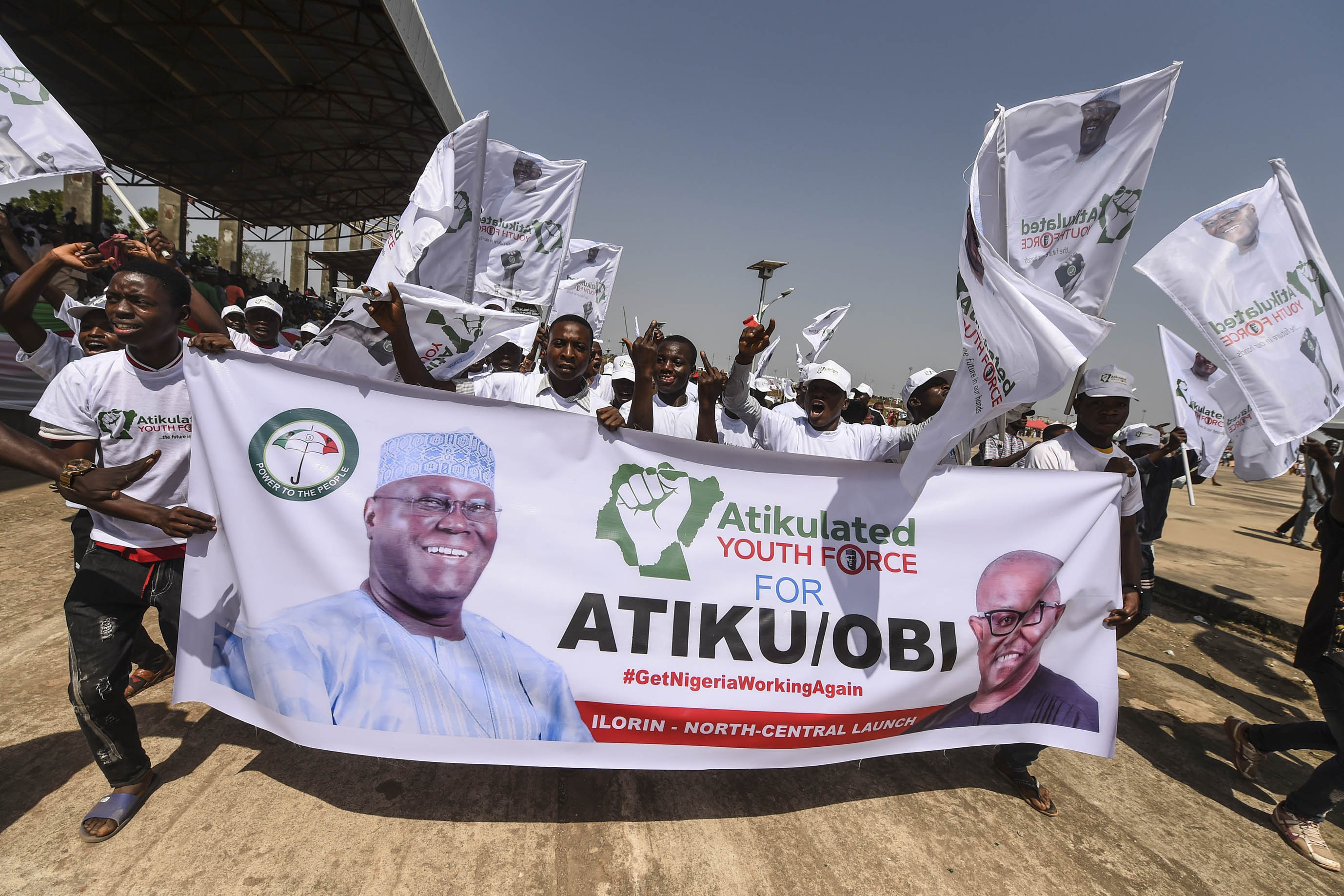 Nigeria’s opposition leader Atiku Abubakar’s supporters carry a poster during a campaign rally in Ilorin, north-central Nigeria. Abubakar and Buhari refused to enter into a recent public debate, and both hail from the populous north. (Pius Utomi Ekpei/AFP/Getty Images)

There are other notable aspirants, all under emerging political platforms, all of them newcomers to the presidential race, all of them well-spoken intellectuals, all below the age of 60 and none of them likely to win: they simply lack the name recognition, the existing support base and the financial backing necessary to take on the APC or the PDP.

There’s the Alliance for New Nigeria’s Fela Durotoye, a motivational speaker and graduate of Harvard and Yale; Kingsley Moghalu, a former head of Nigeria’s Central Bank who’s running as the Youth Progressive Party’s candidate; and Yele Sowore, a journalist and activist popular for his WikiLeaks-style investigative platform, Sahara Reporters.

Obiageli “Oby” Ezekwesili, one of the only two women running, was perhaps the strongest of this group. That was until Thursday morning when she pulled out of the race, to the disappointment of her supporters. The Harvard University graduate, who has served as education minister and vice president of the World Bank, was garnering major attention as a strong female challenger. An active anti-corruption crusader, she was nicknamed “Madam Due Process” for her tough stance against inefficiency and corruption, Ezekwesili has been in the international spotlight since 2014 for marching for the release of the abducted Chibok Girls under her advocacy group, Bring Back Our Girls.

The news that she has stepped down has prompted mixed reactions: Nigerians blame her for wasting time before coming to that decision. On the other hand, many say it’s a smarter move to gather her supporters and those of Durotoye, Moghalu, Sowore into a single coalition strong enough to sway voters. If the other candidates agree to her proposal, it could prove fatal for Buhari and Atiku.

It is campaign season, and candidates are making promises that revolve around familiar themes: reducing alarming unemployment rates, empowering 86-million extremely poor people and providing quality healthcare to more than half the 200-million population in dire need of it.

Each is a critical issue that could make or break the oil-rich nation if not tackled in the coming years.

Top of Buhari’s agenda is providing more support to Nigeria’s 36 states and continuing social welfare programmes for the poor. Next Level, his manifesto, lists what his government has achieved in areas of infrastructure and highlights interventionist policies that have empowered thousands with a salary of N10 000 (R388) a month.

But that money is way below the N18 000 (R699) minimum wage, critics point out, and did not stop the country from becoming the poverty capital of the world during Buhari’s first term as president.

Atiku, on the other hand, is emphasising jobs for Nigeria’s eight million unemployed youths. Ever the businessman, his 186-page action blueprint reveals how he intends to lift people out of grinding poverty by privatising Nigeria’s unused oil refineries as well as the corruption-ravaged Nigerian National Petroleum Corporation.

Traditionally, neither the ruling party nor the opposition run issues-based campaigns: Nigerian politics is more about individuals than ideologies. Besides, politicians zigzagging between the APC and the PDP is so common that you’d be correct to say both are essentially the same. Even Atiku was an APC member until November last year.

The most interesting policy ideas come from the minor candidates, and especially Ezekwesili, whose radical manifesto stood out. Where Buhari and Atiku promise to create the same old jobs and fix the same old roads, Ezekwesili wants to change the structure of the country so that it is not rigged against the poor.

Naturally, she’s keen on education. Teachers would be revered and top talents would be attracted into the profession and given new homes. Early childhood education for the poor, autonomous universities and student loans would be in place. Many vouch for her. “She [was] the most likely to change that sector because of her experience,” says Mojeed Alabi, an education correspondent with Nigeria’s New Telegraph.

But, despite Ezekwesili’s seeming progressiveness, the 55-year-old has been called out for tweeting that she doesn’t “subscribe to the gay or lesbian life choice”.

Analysts are split. This election is especially difficult to call because both top candidates hail from northern Nigeria, and are likely to split the region’s vote. This is in contrast to the past election, in which Buhari — running against Goodluck Jonathan, from southeastern Nigeria — was able to bank on the support of the country’s most populous region.

Those who favour Buhari do so for his reputation as an upright man, coupled with his government’s success in securing the country against terror groups — to some extent at least: although the attacks have diminished over the past four years, Boko Haram attacks in Nigeria’s Borno State have again escalated in recent weeks. At least 100 soldiers died in November alone, according to AFP.

Atiku, on the other hand, is now appealing to a younger demographic, especially on social media. This is smart politics: more than half the population is under 30. Atiku has also chosen his running mate wisely. Peter Obi, from the south, is likely to attract the Igbo vote. But if Atiku does win, he will be dragging into Aso Villa — the seat of the Nigerian president — allegations of shoddy dealings during his time as vice-president that allowed him to found an American-style private university and profit from involvement in the oil business.

Her stepping down is despite the fact that she impressed voters at a presidential debate just last week. So did Durotoye and Moghalu, the only other candidates who turned up for the debate. It was a tolerable affair: their arguments were fairly sound, promises overly ambitious, presentations composed.

But Buhari and Atiku failed to show up, a move that has earned them a major backlash from voters. Some say it proves the arrogance of both candidates in presuming they would win without debating. Buhari is especially notorious for avoiding exercises that require oratory vigour: last election season, the president failed to show up at a presidential debate organised by media houses, and his campaign team continues to downplay the significance of a debate. It’s probably deliberate, even smart: both Buhari and Atiku would have been floored by their silver-tongued counterparts.

Of course, none of the above matters if the election is rigged. “Our elections don’t even come close to being free and fair,” argues Cheta Nwanze, who heads the research desk at SBM Intelligence.

International observers have already expressed concern about the 2019 election. Previous elections have been marred by vote rigging, voter intimidation and assaults on observers and journalists. The closer the result — and all signs suggest that this will be a tight race — the more serious these concerns will become.