‘HIV is my unwanted pregnancy’

‘There’s nothing wrong with you. Nothing has changed between us — I still love you.”

Well, that’s how it starts at least.

But it doesn’t always stay that way after I’ve had “the talk” with my partners. Sometimes it ends with the gestures and statements that pathologise my existence and make me feel dirty.

My first heartbreak happened the day my doctor told me that I had tested HIV positive.

It was a day after my 19th birthday.

“I am a statistic — another HIV-positive gay man,” I uttered to my friend and lover after a second test confirmed the news.

I was hurt. I felt as though my life had ended when it had just begun.

HIV — in many ways — was my unwanted pregnancy.

My story begins with a man I met through a friend. He came from a good family and was doing well for himself. Like every person living with HIV, he didn’t “look” like he had HIV.

But HIV has no face.

In 2017, researchers found that this is also true for men who have sex with men, according to research presented at the international Aids conference.

Several studies over the past eight years have shown that taking the HIV prevention pill, also known as pre-exposure prophylaxis (PrEP), can reduce someone’s chances of contracting HIV from having sex — by up to 96%, if taken daily. New research may also pave the way for men to begin using PrEP on demand — taking two pills before sex and then one a day for two days after sex, which has been shown to be just as effective as daily dosing, but only for men who have sex with men.

Although national PrEP guidelines haven’t yet been updated to include recommendations for on demand dosing, Anova senior clinical specialist Kevin Rebe says there is enough evidence now to support men who have sex with men using it.

“I’d say that two doses before sex and one dose daily for two days after sex is an evidence-based strategy that has been proven to work in men,” Rebe told Bhekisisa.

South Africa’s latest national HIV plan commits the country to providing PrEP — as well as condoms and lubricant — to people at high risk of contracting the virus, such as sex workers, young women and men who have sex with men. 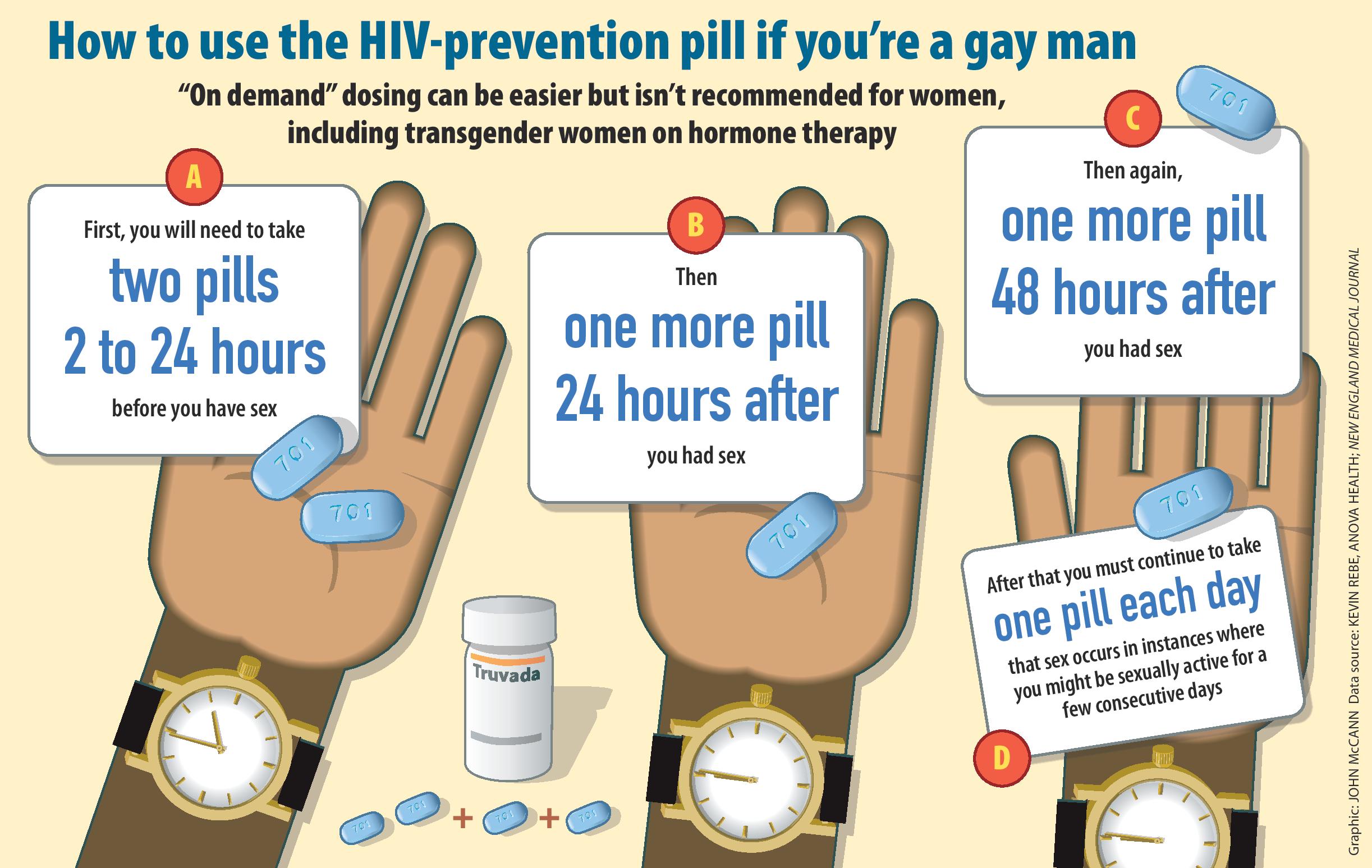 Men who have sex with men can now take the HIV prevention pill before and after sex as shown above, instead of every day. Have questions? Speak to your doctor. (John McCain)

In the gay community, I knew discussions about your status were a thing, but when I started dating my ex, I never thought I would be there, trying to “prove I was clean”. When the conversation came, my ex said he’d donated blood “just last week”.

“But when did you last test?” I asked my partner.

“Six months ago,” he replied.

“I know that it is my ex. I am going back to Johannesburg,” he explained. “He will pay. I will do anything for you.”

Then he mumbled: “I am sorry.”

I’d been lied to.

In my five months of living with HIV, I’ve had safe sex with two people. One knew my status. One didn’t.

Stigma is real and I’ve heard stories about people who have had to leave the country because the LGBTI community started gossiping about them and their status, making their lives horrible.

For now, I’ve decided that I will keep my status to myself. But when I find a partner who wants to be in a long-term relationship with me, I’ll tell him.

Meanwhile, I am on treatment to make sure that my virus doesn’t develop into Aids and kill me — and because I want to have an undetectable viral load so I don’t transmit the virus to another person.

Many argue that it is too late to be safe. But it is not.

Bhuti Poz was diagnosed with HIV five months before writing this and asked to write under a pseudonym.