The ANC says it is heading to the Press Ombudsman over a City Press front-page report, titled ‘We don’t need white votes‘. 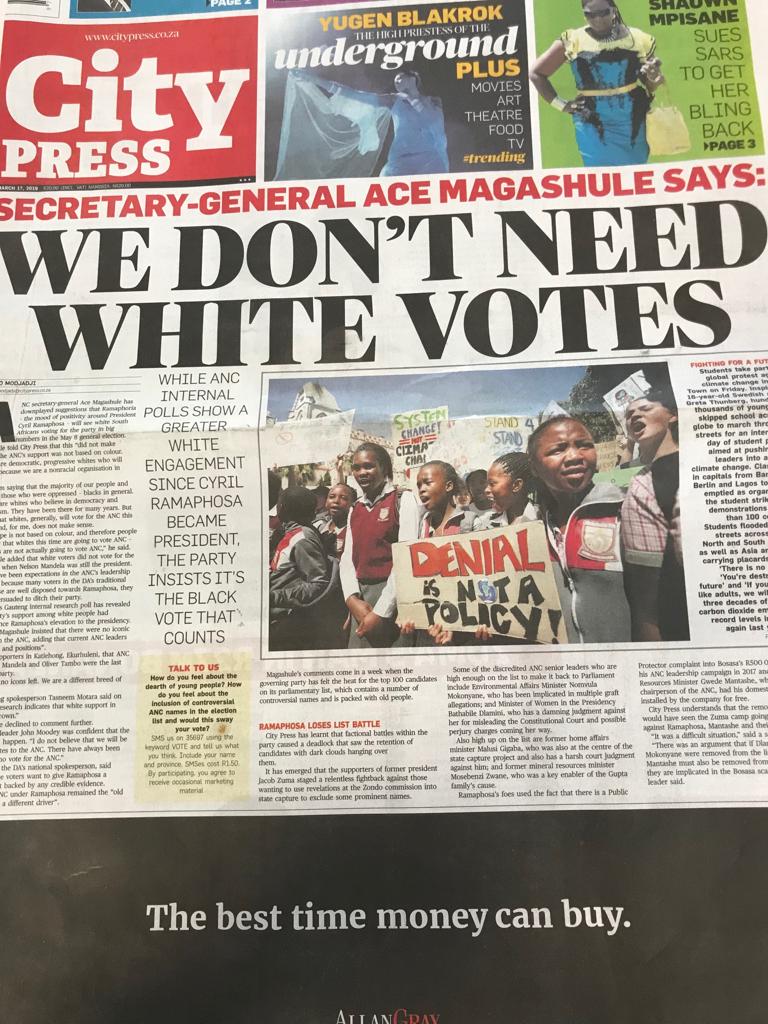 The report focuses on the possibility of white voters giving their support to the ANC due to “Ramaphoria”, the positive sentiment linked to Cyril Ramaphosa’s position as ANC leader and state president.

In a statement issued on Sunday, the party said the headline of the story did not reflect what Magashule was reported to have said in the article.

“In the light of the serious, and comprehensive misrepresentation by City Press yesterday, falsely claiming on their front page that the secretary general of the ANC, comrade Ace Magashule, had said that the ANC does not need white votes. Such reckless conduct cannot be condoned or left unchallenged. The ANC has therefore, after due consideration, decided to report City Press to the press ombudsman,” ANC acting national spokesperson Dakota Legoete said in a statement on Monday.

The party said it would approach the ombud as a matter of urgency and in the interests of transparency.

On Sunday, the acting party spokesperson said that for the City Press to report that Magashule had said the ANC did not need white votes, was mischievous, deliberately misleading and a total fabrication.

“The headline does not reflect what the body of the article reports the secretary general of the ANC to have said,” Legoete said.

He went on to explain that Magashule’s remarks had emphasised that the ANC was a democratic organisation whose support was not based on colour.

“Comrade Magashule pointed out that there are progressive, democratic whites who will vote for the ANC. However, he made the obvious factual observation that the majority of South African voters are those who were oppressed — blacks in general, and Africans in particular,” Legoete said.

“The ANC needs every vote — black and white — and we are grateful for the support that we receive from every South African regardless of colour,” Legoete added. — News24

Canny Maphanga
Canny Maphanga is an aspiring documentary filmmaker, a published writer and a TV Reporter from Sunny Durban, Kwa-Zulu Natal with a strong passion for Africa and its endless stories. She has completed her BA journalism degree at Rhodes University. Her craft is constantly under construction as she is continuously learning from the TV/film industry everyday with work experience at Cardova/Tswelopelo, Rhodes Music Radio and SABC(DBN) to name a few.
Facebook
Twitter
WhatsApp
Linkedin