Conrad Botes’s new show, now on at the Circa gallery in Johannesburg, is dominated by four large works, three of which form something of a triptych, though you’d need a lot of space to hang them together.

The three works are about the massacre at Marikana, dealt with somewhat indirectly. Botes says they form “a kind of allegory of what happened at Marikana. It’s not didactic; it alludes to what happened there and people have to figure out for themselves what it means.”

The first, The Goliath Protocol, has a giant-like figure that seems to be falling forward, with a smaller Cyril Ramaphosa figure apparently etching something on to the giant’s very skin — a skin covered, in Botes’ usual style, with a myriad smaller cartoonish images, like a crawling tattoo. 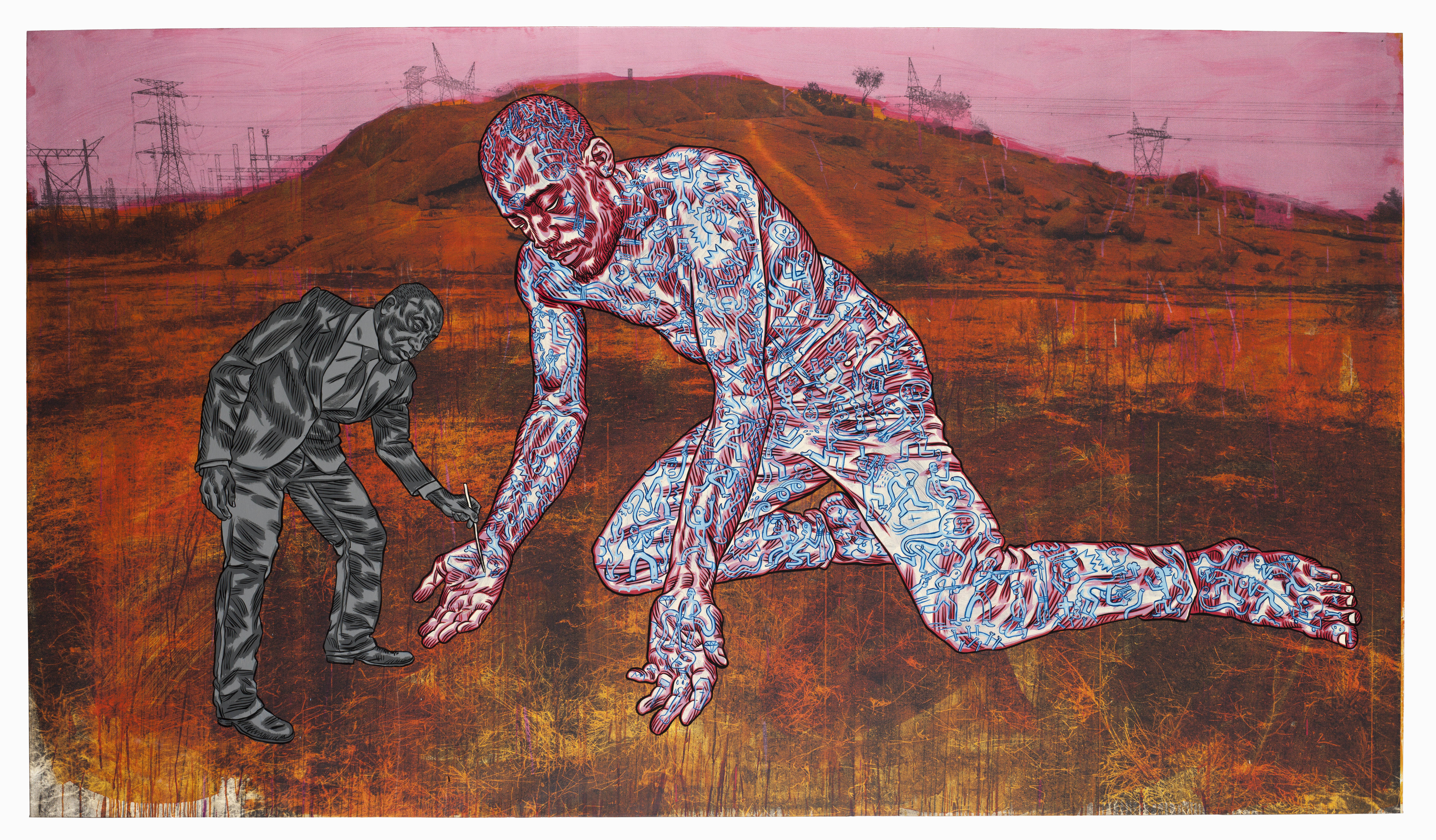 “I was working with biblical themes as vehicles for allegory,” says Botes. “I did a work a while ago called The Origin of Violence, and the story of Cain and Abel was a perfect fit. When I started thinking about doing something about Marikana, the David and Goliath story came to mind.”

Yet here the roles are turned around. David may have seemed disadvantaged in relation to the giant Goliath, whom he killed with a stone from a slingshot, but, as Botes says, in the military technology of the time “the slingshot was a serious ballistic weapon. So David actually had an unfair advantage. It was like an assassination.”

The second of the three works is titled The Valkyries, and has a fallen figure surrounded by weird bat-like creatures with skull heads. Unlike the mythological Valkyries, which transported the souls of warriors to Valhalla after death in battle, these creatures seem to be tormenting the dead or dying man. 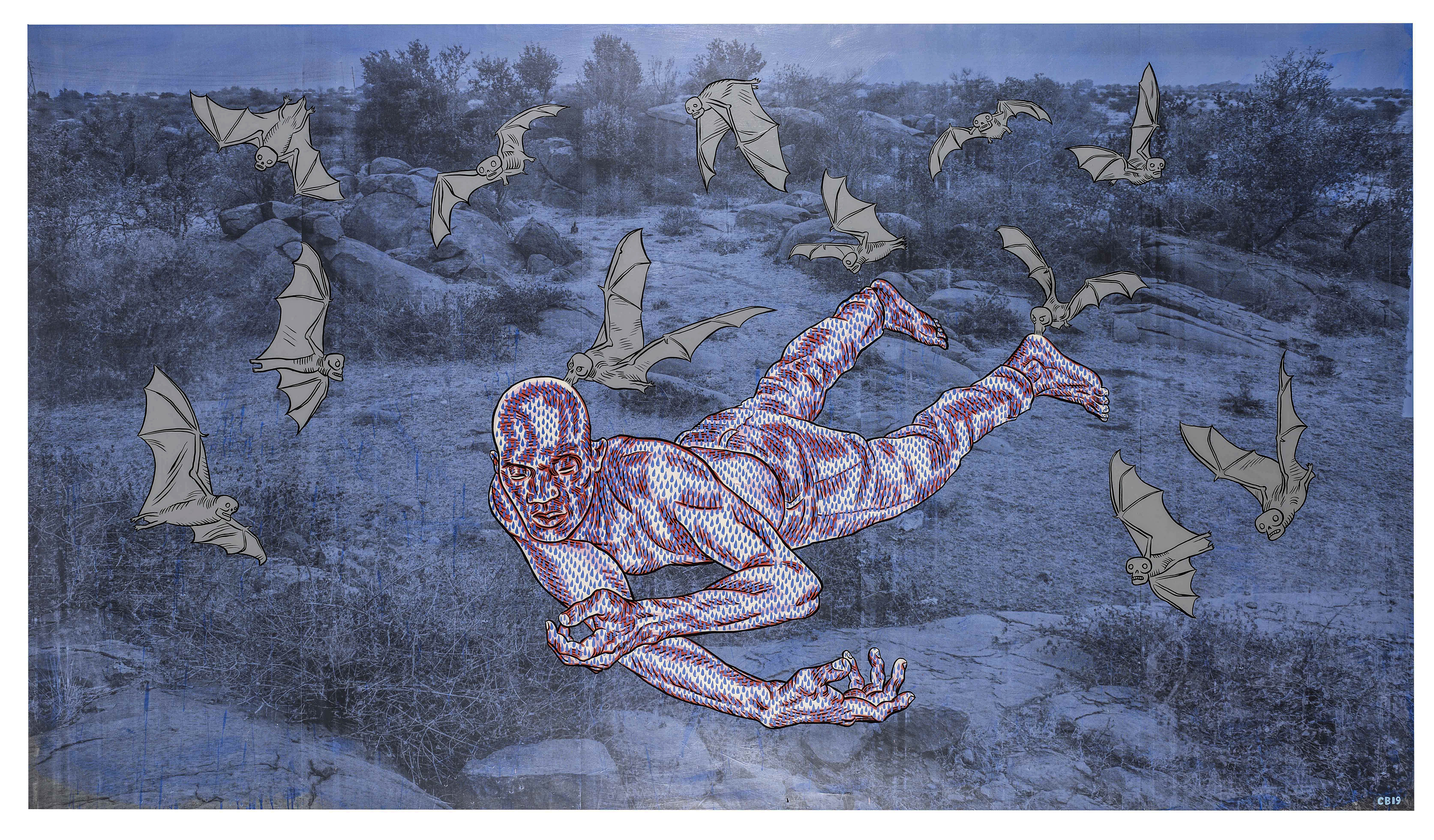 This painting alludes to the murders at the second koppie, where the strikers of Marikana, many having been shot down by a police fusillade on the slopes of the first koppie, took refuge. But they did not escape. Police shot them as they hid, or even, it has been claimed, as they tried to surrender.

Conclave, the third work in the set, alludes to what happened after the massacre, when, as Botes puts it, “the cops had a meeting and said, ‘This is the story, this is what happened’ ”. The Farlam commission that probed the incident and its aftermath revealed this secret meeting of police officers and how they tried to concoct a cover story.

The painting has at its centre an orange-red, fox-headed creature diligently taking notes. He is surrounded by smaller, bird-headed figures who seem to be feeding him information, though some look away as if disinterested.

All three of these large works are painted on a background made from photographs of the Marikana landscape, photos taken by Botes and blown up to a huge size and then screen-printed on to the canvas. They add texture as well as specifically locating the foreground images.

“I wanted to get the landscape in, with as little sky as possible,” says Botes. “The image is dominated by the physical earth, not the sky. It’s an oppressive landscape, it’s claustrophobic.”

In Conclave, the background is coloured in silver, a reference to what Botes calls “the prize” — the platinum mined at Marikana, the expensive commodity around which the mining, and indeed the massacre, revolved.

The fourth painting on the show, Sabbath, is the largest of them all. It has three panels, all of them crowded with roiling figures. They are onlookers, but involved onlookers. Some hold cellphones aloft, others seem to push others out of the way to get a better view. Some, also, seem rather self-involved, as though concerned with their own issues, but they are clearly part of this mob. 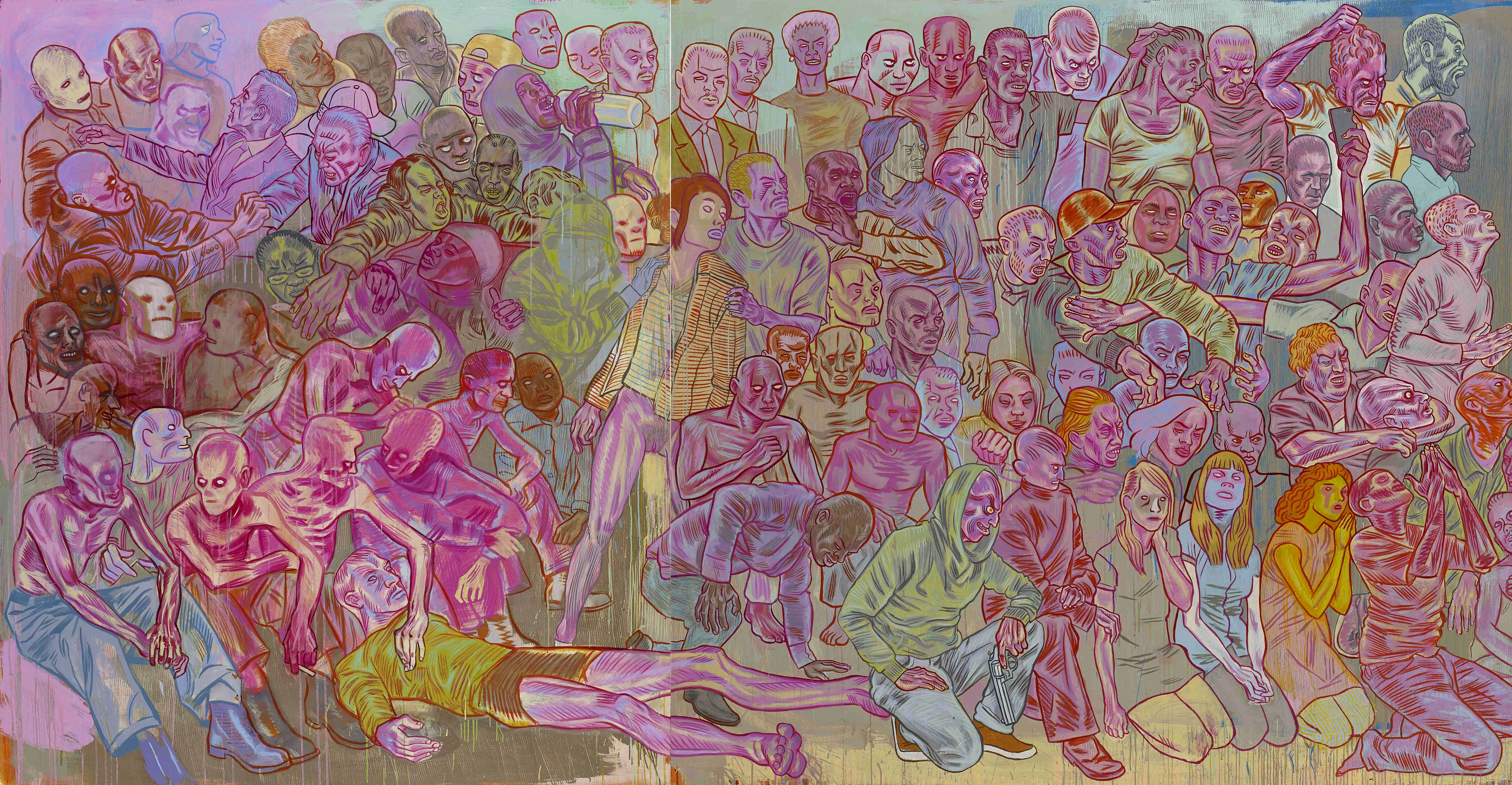 Conrad Botes artworks, like Sabbath (above), allude to what happened during the massacre at Marikana. (Conrad Botes)

They cluster around the central image, which is Botes’ version of an image from one of the “black paintings” by Francisco Goya, the Spanish artist who died in 1828. It is a gruesome and shocking work, Saturn Devouring His Son, based on the Greek and Roman myth of the father of the gods, who, fearing deposition by his offspring, ate them soon after birth. (One survived. Zeus deposed Saturn and became the new chief god.)

On either side of Sabbath are drawings from Botes’ sketchbooks, showing his process of assimilating useful imagery that would ultimately feature in the big oil painting. They reference Goya works, including his Witches’ Sabbath (from which Botes surely draws his title), as well as images by photographer Sebastião Salgado related to mining and conflict in South America, plus other situations to do with mob-like behaviour.

The sketchbook works, says Botes, are “thoughts I drew. I thought, when I painted this [Sabbath], it would be nice to show where the thoughts came from, so I had facsimile prints of them made.”

Goya’s black paintings were painted directly onto the walls of the home in which he had exiled himself after the Napoleonic wars that caused so much suffering in Spain, and which he dealt with in his often horrifying suite of etchings, The Disasters of War. They are, both figuratively and literally, very dark works.

They were later removed, with the plaster they were painted on, from the walls of the house and attached to canvas. They ended up in the Prado in Madrid, where, Botes says, he has seen them several times. They, and other work by Goya, have clearly had a major influence on Botes, though he transmutes them into his vivid, detailed comic-book style.

The central Saturnine figure in Sabbath is transformed in more ways than one. Here, the devouring deity sports an erection, as though his cannibalism were a major turn on. Botes says that there are accounts of the black paintings, and their removal from Goya’s house, that allege the figure had an erection in its original form.

“They are remarkably intact,” he says of the works, “but you can see the damage where the plaster broke. So they had to fix them up, and this painting was edited in the process. I wanted to restore the erection. It amplifies the whole image.”

The Goliath Protocol runs at Circa gallery, Jellicoe Avenue, Rosebank, Johannesburg until May 19