The municipality of Jozini, in KwaZulu-Natal, had the highest proportion of young voters in the 2014 national elections. More than a third of the voters here are also under the age of 30. When the Mail & Guardian visits, it finds young people torn between hope for a better future and persisting issues such as unemployment, drug abuse and teenage pregnancies.

Jozini sits on the banks of a massive dam, not far from the southern border of Eswatini. The Lebombo Mountains — where Zulu King Dingane was killed by Swati fighters — head north to the border with Mozambique. Driving up the Nambulungwana mountain peak towards the town, you can catch glimpses of the fat Pongola River, as it flows out of the dam towards the Indian Ocean. 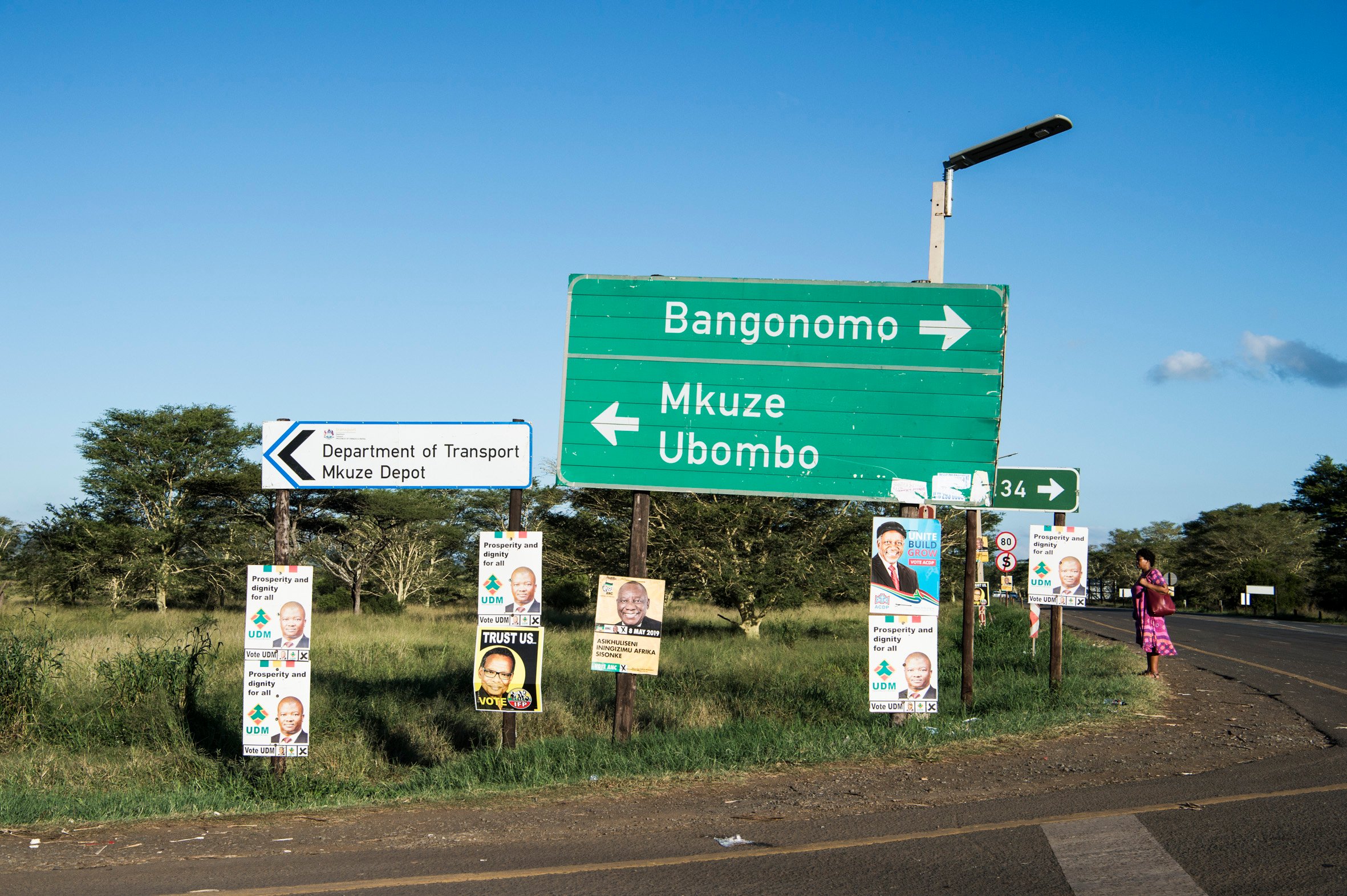 Posters on the road to the municipality. (Delwyn Verasamy/M&G)

The roads are occasionally obstructed by cattle and goats roaming without fences to keep them in. Rondavels and roadside vendors cluster along the main roads, and are scattered across the surrounding hills. ANC and IFP posters dominate the telephone poles.

Both parties are vying for the votes of South Africa’s youngest voters. According to data from the Electoral Commission of South Africa (IEC), the most active youth voters of the 2014 national and provincial elections came from Jozini and the nearby Mfolozi municipality, where 36% of voters are under the age of 30 in both local governments.

The national average of voters under 30 in 2014 was 24%, whereas a third (31%) of KwaZulu-Natal’s voter base was under that age. The Western Cape recorded the oldest voter turnout, with 80% of voters over 30 years old.

The youth of Jozini are gearing up for May 8, and many are ready to cast their votes again. On the town’s main road, on Friday night, music blares from the Manyonyo Lounge & Lifestyle Centre. The lounge is the venue for the ANC’s Freedom Day celebrations. It’s a shisa nyama — which doubles as a carwash.

President Cyril Ramaphosa’s portrait — along with “Let’s grow South Africa together” and “Thuma Mina” slogans — is emblazoned on placards nailed to the posts that surround the plot. Black, green and gold T-shirts are plentiful as people huddle in circles, drink their beers and test how much bass the speaker’s subwoofer can handle.

“When it comes to entertainment in Jozini, there are very few to no places that offer all these entities in one go,” says the lounge’s founder, Njabulo Mthembu (33).

Mthembu envisions a filling station on the piece of land and ultimately a mall that can absorb all the road’s holiday traffic, as it travels through the region. “Tonight, we’re hoping for a lot of fun,” Mthembu explains. “Even if you’re EFF or IFP, let’s have fun. Let us celebrate our freedom and hope that the government we’re voting for will give us a chance in creating this employment we so badly need.”

Mthembu believes there are a lot of opportunities in the area — it’s just a matter of taking advantage of them. “This is why I built this shisa nyama here and not in Durban or other busier areas. Imagine if a lot of guys my age could stand up and create their own businesses. Imagine all the jobs.”

According to the 2011 census, only 16% of the 200000 residents of the area were employed — about half the rate of the greater KwaZulu-Natal. The increasing rate of youth unemployment has inflamed politics over the last decade. Last year, only two months after Ramaphosa assumed office, the ANC lost its seat to the IFP in the Jozini by-elections.

Some locals, however, say that not much has changed since. “It’s like we are stuck,” says Nkosi Materson, from the Ikusaselihle Youth Organisation (IYO), a local nonprofit organisation. IYO operates from a small structure situated in an open plot of land with chickens clucking in the background. It accommodates a couple of plastic chairs, a table and a counter. Materson gestures at the bare room, saying: “Government is not doing proper research about the youth’s needs to overcome poverty. We’ve got nothing. We don’t have transport, computers or even signs showing this is where the office is.” 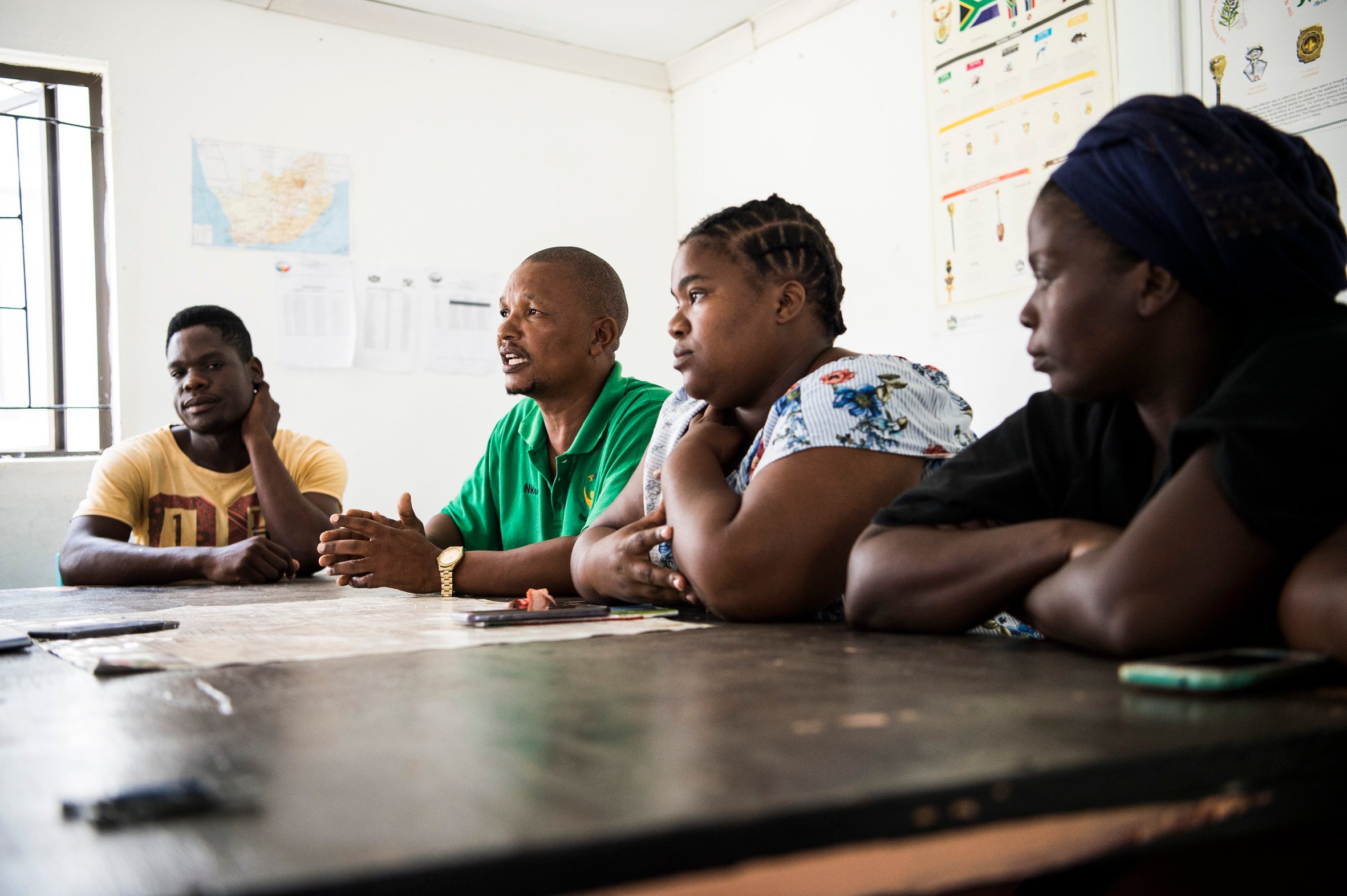 Materson says that he joined IYO once he realised that drugs and teenage pregnancy were some of the most significant issues facing the community. Along with more than 100 members, they help raise awareness about these issues at schools and town hall meetings.

“We’re working hard,” he adds with excitement in his voice. “The youth is very important in today’s politics.”

Earlier this year, the IEC raised its concern about the nine million eligible voters who are not registered, six million of whom are between the ages of 18 and 29. It did add, however, that of the 700 000 new registered voters this year, 81% are under the age of 30.

Zama Ntshembeni also volunteers at the youth organisation, and believes that teenage pregnancy is one of the biggest contributing factors to the area’s young population. “The young girls get pregnant at 16. And at 19 they have their second or third baby, from separate fathers who are all unemployed.”

In a fiery tone, she adds: “Who’s going to take care of those kids?”

According to the 2016 Community Survey, 70% of the child-headed households in Jozini have women as their heads, nearly double the rate of the province as a whole (38%).

Although the area is plagued by compounding issues challenging the youth’s hope of a better future, many, such as Neo Mafuleka, seem to have the ambition to change Jozini and the country for the better. Mafuleka, who’s in his early 20s, believes that there’s still hope for the country.

“As long as Parliament stops fighting with each other and focuses on the communities instead, there’s still hope,” he says, lighting up as he talks.

“As we’re going to vote, we’re expecting change at the end of the day. We’re not just voting to put someone on the chair. It’s not just a vote. It’s an expectation for change.”

Just down the road from the IYO’s office, the bass from the house music starts pumping louder at the Manyonyo Lounge & Lifestyle Centre, with young people in ANC regalia flowing into the establishment. By early evening, the meat is on the fire. 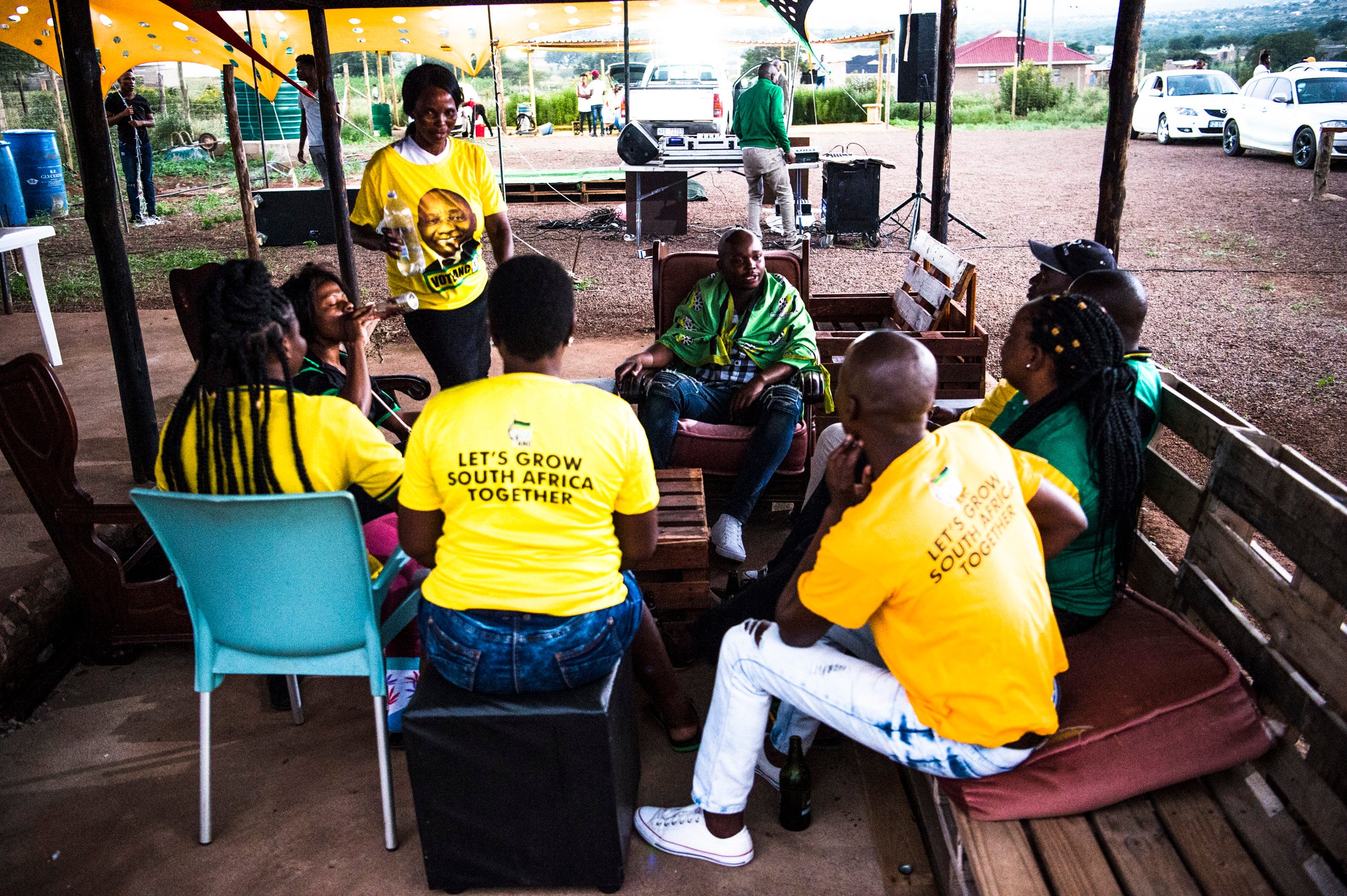 Proud host Mthembu says that, although the country is currently struggling because of the poor choices made by its former leadership, the situation can be improved. “I strongly feel that the future is held by the youth. If they [the government] could only support the youth and exercise everything to help us go forward, we can make it.”