‘Every young black male who was in the park last night is a suspect in the rape of that woman,” says Felicity Huffman, playing Linda Fairstein in the series When They See Us, the New York prosecutor in what has become one of the United States’ most significant criminal cases of the 1990s.

On the evening of April 19 1989, Trisha Meili took a jog through New York’s Central Park. That same evening, a group of about 30 teenage boys also made their way into the park.

Although some of the boys were just following the crowd, some of them were up to no good. They threw rocks at cars, harassed passers-by and assaulted homeless people. The group dispersed when the police arrived. Five of the boys were arrested and taken to the Central Park police station for questioning before being charged with taking part in an unlawful assembly.

Early the next morning, Meili was found unconscious, bound and bleeding in the park. She had been beaten, raped and had sustained injuries that left her in a coma for nearly two weeks.

A series of events after the two incidents in the park led to Antron McCray, Kevin Richardson, Korey Wise, Yusef Salaam and Raymond Santana (aged 14 to 16) being wrongfully convicted of Meili’s attack. Without the support of DNA evidence or eyewitness accounts linking them to the crimes, the United States justice system still successfully kept the innocent civilians, who came to be known at the Central Park Five, behind bars for periods ranging from six to 13 years. 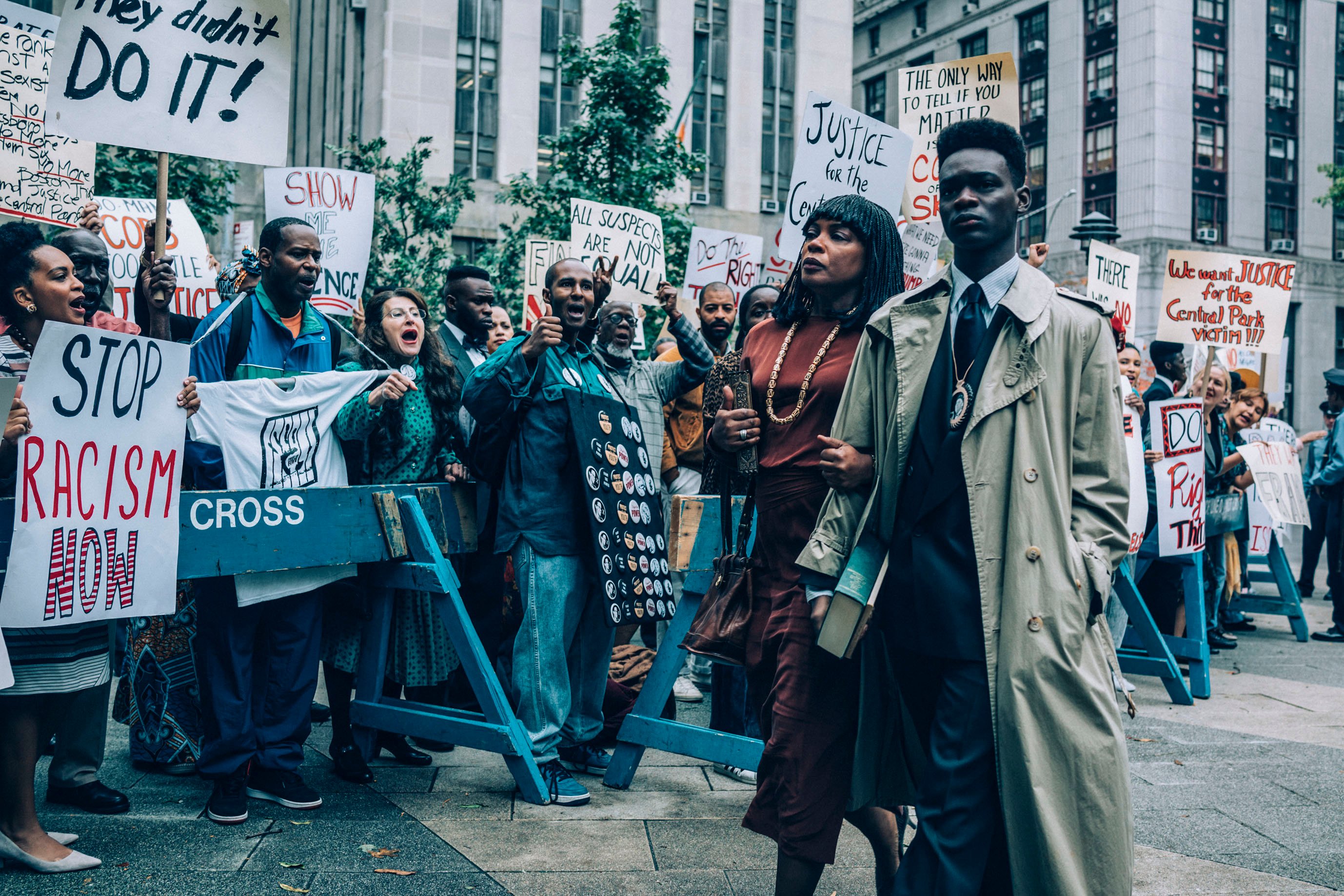 Ethan Herisse as Yusef Salaam in When They See Us. (Netflix)

The truth about what happened to Meili only surfaced when the real perpetrator, Matias Reyes, came forward in 2002 to confess his crimes.

Their case stands as an example of the US judicial system’s perception and treatment of people of colour.

“Thirty years ago, this story was central to our education about how race and politics worked. It became a symbol of our own trauma, too,” said Rashad Robinson in a 2019 column for The Guardian. Robinson is the executive director of Colors of Change, a nonprofit civil rights organisation that seeks to advance the political voice of African-Americans.

Using the Central Park Five narrative to highlight the racial flaws of US justice, film director Ava DuVernay wrote, directed and produced the Netflix miniseries When They See Us, in partnership with Colors of Change.

“The story you know … is the lie you were told. Today, the truth prevails. #WhenTheySeeUs. Now streaming worldwide. Love to Korey, Ray, Yusef, Kev, Antron,” said DuVernay in a tweet leading up to the release of the series.

The story you know…
is the lie you were told.
Today, the truth prevails. #WhenTheySeeUs.
Now streaming worldwide.
Love to Korey, Ray, Yusef, Kev, Antron. pic.twitter.com/xStODvV6jK

When They See Us is not the first time the case has received cinematic treatment. In 2012, filmmakers Ken Burns, Sarah Burns and David McMahon collaborated to produce The Central Park Five. The award-winning documentary was inspired by Sarah’s undergraduate thesis, which unpacked the racist media coverage the case received.

The majority of DuVernay’s filmography focuses on reimagining black narratives that were historically disseminated by white-dominated institutions such as the courts, school syllabuses and the media. 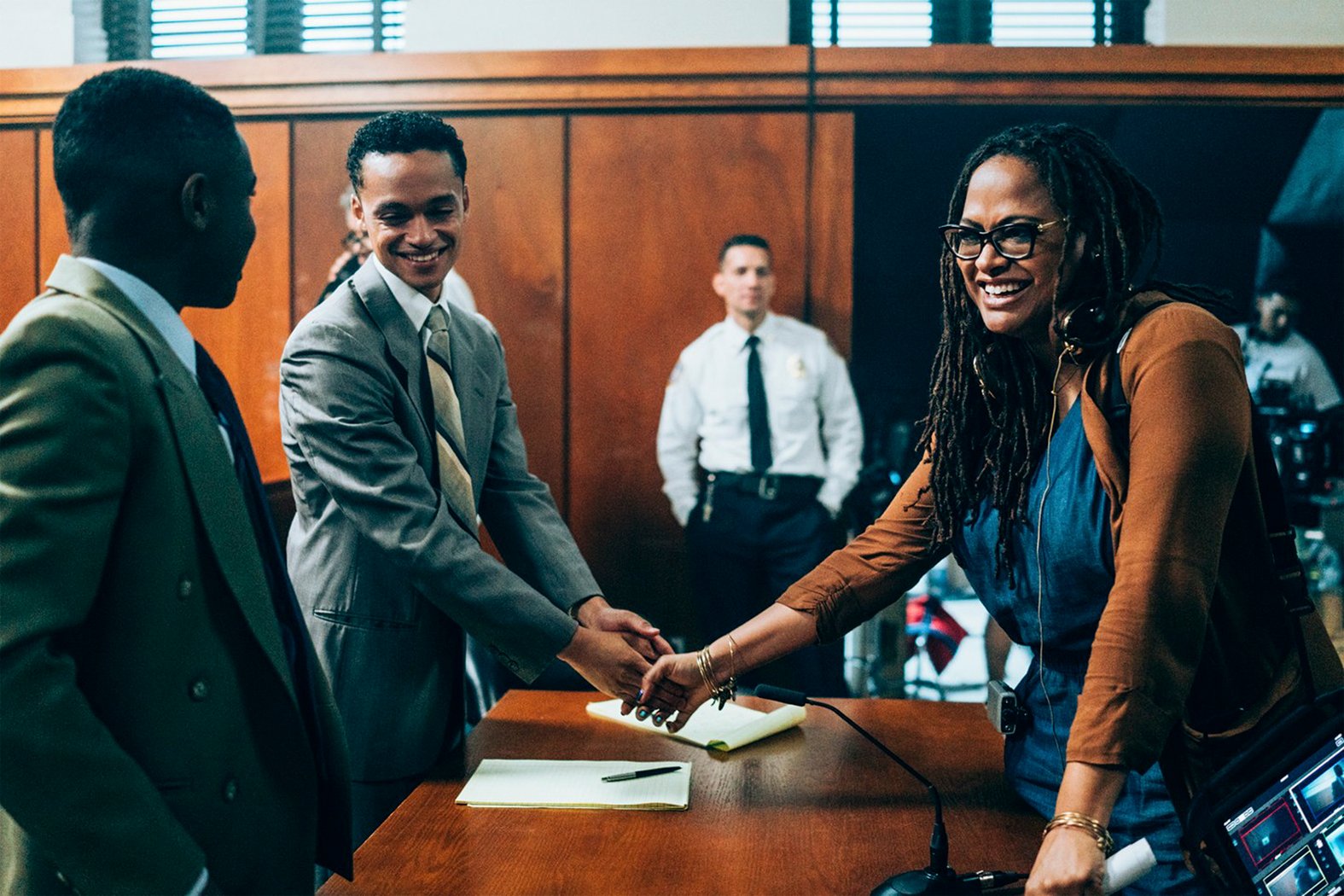 She also directed Selma, a 2014 film depicting the historic 1965 voting rights marches from Selma to Montgomery. Selma earned DuVernay praise for being the first film in Hollywood to centre on Reverend Martin Luther King Jr and archive a crucial part of American history.

READ MORE: Selma: a reminder that 50 years on, #blacklivesmatter

Selma was followed by the release of 13th, DuVernay’s 2016 documentary highlighting how US prisons are disproportionately filled with African-Americans. Through extensive interviews, the doccie argues that the narrative of black criminality is a political gimmick that has been used by presidents Ronald Reagan, George W Bush and Bill Clinton during their terms in office.

Middle of Nowhere (2012) and DuVernay’s Oprah Winfrey Network drama Queen Sugar focus on the effects of imprisonment on black families and neighbourhoods.

Unlike The Central Park Five documentary’s investigative treatment, When They See Us adds to DuVernay’s filmography by giving the boys a narrative that spans beyond their false convictions.

With the story playing out over 14 years — from 1989 to 2003 — DuVernay’s presentation gradually unfolds through four episodes, all of which are more than an hour long.

In a total of five hours, When They See Us is a painful re-enactment that aims to be as realistic as possible. By not rushing through the plot, DuVernay encourages the viewer to take a whole and empathetic look at the young men. The result is a moving, uncomfortable, heart-wrenching, but necessary, series that uses a 30-year-old story to explore themes that are still relevant today. These themes are corruption in the justice system, the normality of institutional racism and police brutality.

Corruption plays itself out during the Central Park Five trials where politics trumps fairness and justice. One of the many incidents

takes place in the court chambers when a politically affiliated attorney reveals how Justice Thomas Galligan of the Manhattan Supreme Court was hand-picked as the judge to ensure that the court ruled against the teens. We then witness the attempt by the state attorney, Elizabeth Lederer, to withhold evidence that would have proven their innocence.

Very early on in the series, viewers witness how those in the justice system simply accept unreasonable and unfounded assumptions. Before the Meili investigation reaches its conclusion, Fairstein immediately assumes the perpetrator is black and neither subordinates nor rank peers argue otherwise. 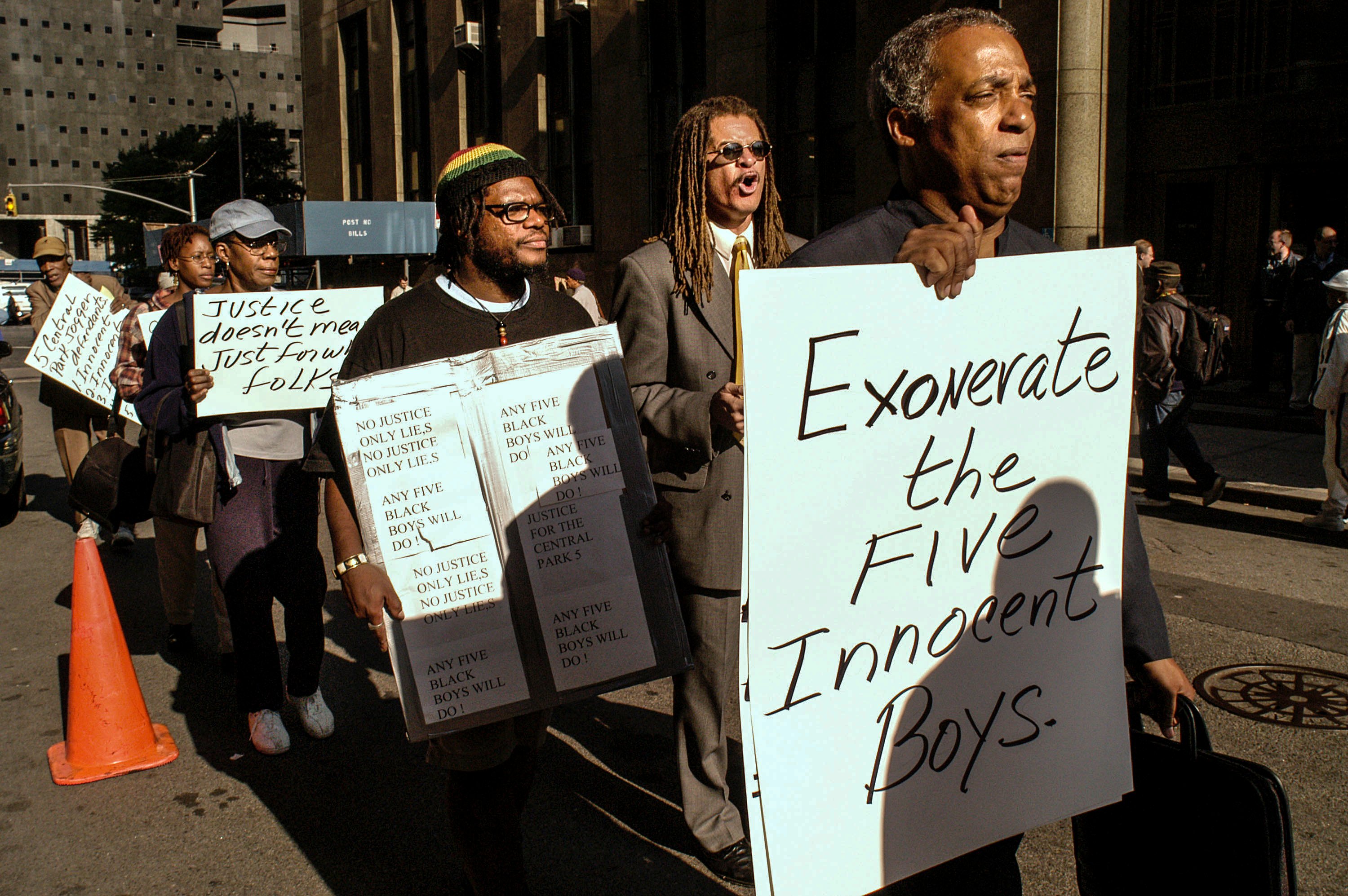 In addition to such norms, the racial motif is presented through the white characters’ language. Terms such as “wolf pack”, “animals” and “a gang from crack, welfare, guns, knives, indifference and ignorance” are used to describe the teenagers.

Corruption and racism inevitably become the police brutality that threads its way throughout the series. The boys are beaten and starved during their initial interrogations and this only grows in severity when they are imprisoned. This is especially so for Wise, the eldest of the boys and the one who was handed the longest sentence — served in adult prisons. The brutality was so severe that Wise pleaded for solitary confinement, where he served most of his sentence.

When They See Us is made deeply relevant in today’s political climate because of the minor, but significant, role played by the current president, Donald Trump.

He paid for adverts in major New York newspapers advocating for the death penalty for the Central Park Five. When They See Us inserts this information into the series by having characters listen to archival radio or watch television footage of interviews that Trump gave. The Atlantic reported that his contribution to the wrongful conviction of the boys was more than $85 000. 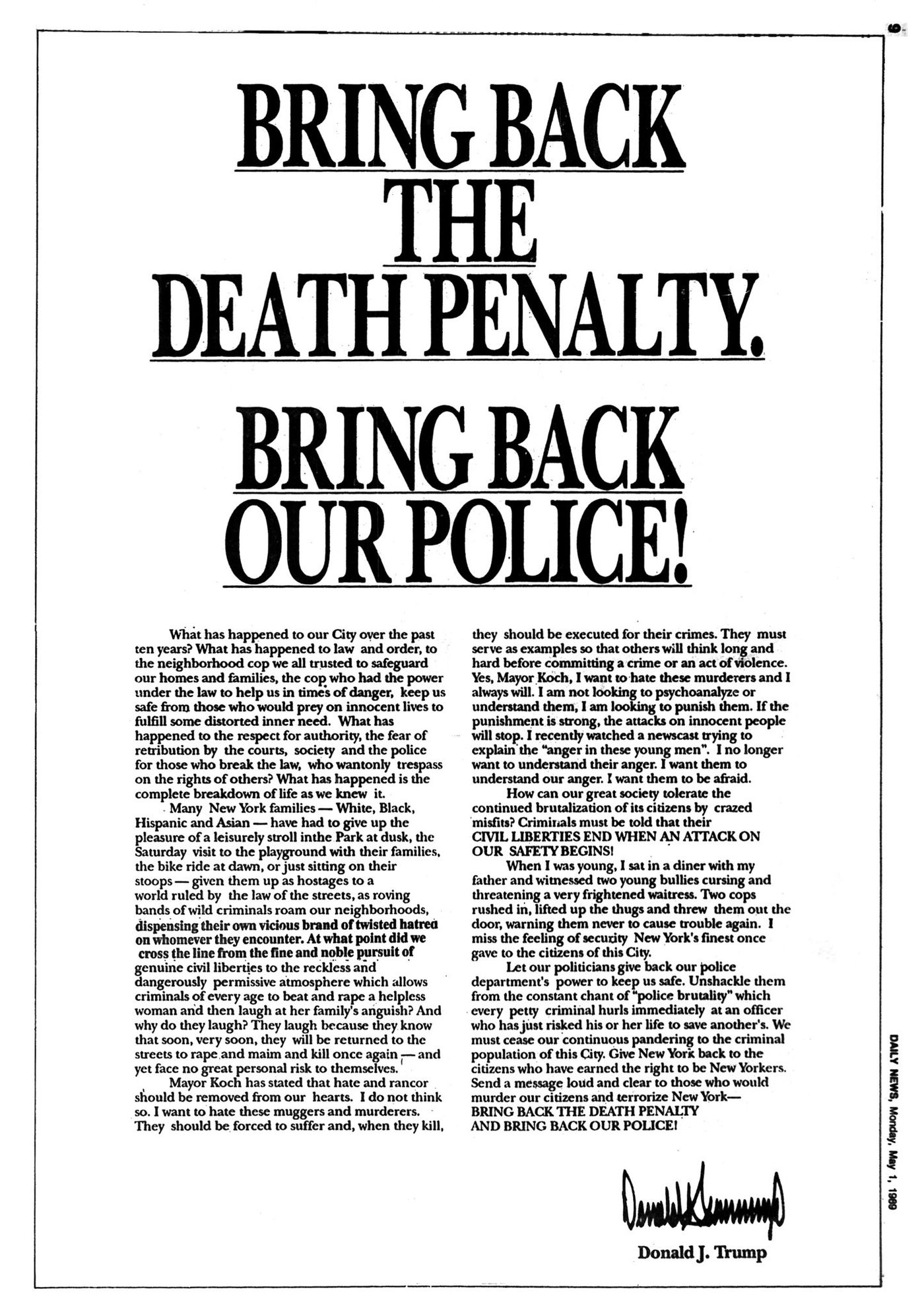 One of the advertisements paid for by Donald Trump. (Supplied)

When They See Us shows that the US’s crime-control policies and the racist perceptions that inform mob-like law enforcement are a generational epidemic that echo the Emmett Till story from 1955.

These policies and perceptions beget ideas such as building a wall between the US and Mexico, informed the shootings of Trayvon Martin, John Crawford III, Jordan Davis and Michael Brown, and necessitates the #BlackLivesMatter movement.

But, whereas the film pleads for reform in the long run, right now it is a painful, tear-jerking reminder that the US has no plans to be on the black person’s side.

Oh joy, my lockdown food is on its way