Beyoncé and the Spirit of plagiarism

The devil works hard but Beyoncé Knowles-Carter and her creative team work harder. First she released Homecoming, a Netflix documentary following her memorable offering as the first black woman to headline at Coachella in 2018. Shortly thereafter she released a live album to accompany the documentary.

In between promoting the Lion King live-action remake, in which she voices Nala, she signed a deal with Adidas to create a new footwear and apparel line.

This comes after being on tour for four months and fulfilling her Global Citizen duties.

In addition to Knowles taking on the role of Nala, the artist released The Lion King: The Gift, a 14-track album to accompany the live-action remake’s soundtrack.

The album features artists such as Jay-Z, Wizkid, Kendrick Lamar, and Childish Gambino alongside South Africa’s Moonchild Sannely and Busiswa. The Gift was released shortly after Knowles premiered Spirit, a single that features on both her album and the soundtrack of the Lion King remake.

As the recent Beyoncé-phoria from the The Gift began to die down, making way for commentary outside the Beyhive, talks of plagiarism related to the Spirit music video began to surface.

Spirit allegedly borrows its visual cues from La Maison Noir: The Gift and The Curse, an 18 minute visual album accompanying Petite Noir’s eponymous 2018 EP. Photographer and filmmaker Justice Mukheli took to Twitter with a picture comparing frames from the two works with a caption that read: “The ridiculousness of how bluntly Beyoncé chopped Petite Noir’s work is beyond my comprehension. Frame for frame.”

The ridiculousness of how bluntly @Beyonce chopped @PETITE_NOIR work is beyond my comprehension. Frame for frame pic.twitter.com/nrQqvSNIHQ

After Mukheli’s tweet Petite Noir, aka Yannick Ilunga, pointed to the similarities and said his team had not been not consulted in a tweet that has since been removed from his account.

The Mail & Guardian contacted Ilunga and his creative partner and wife, Rochelle Nembhard, for comment. Nkenge Arscott of Nomadic Africans, who represents the duo, responded, saying: “Yannick and Rochelle are unable to offer a comment at this time. However, we do encourage you and your team to explore this further.”

One of the arguably more salient similarities between the two works is the colour palette and material textures used in the wardrobes. Characters in both La Maison Noir and Spirit sport outfits in indistinguishable shades of red, blue and white.

In both cases, the garments are made of airy materials that allow them to be manipulated by the wind as the dancers move. This is in addition to scenes in both videos where the protagonists wear outfits and masks that are embroidered with cowry shells.

Other visual similarities between La Maison Noir and Spirit can be seen in their settings and the choreography, as well as how the videographers frame the characters.

La Maison Noir was shot in the Namib desert and Spirit in the Grand Canyon, Arizona. While the works were shot on different continents, they both depict an arid, mountainous, windy desert setting.

Both videos also feature wetland-like scenes, in which the protagonists and their devotees stand before greenery and a water source, while dressed in red.

Then there is the close-up scene of a woman who looks to the camera to show her profile. She loosely covers her head and the left side of her face with the excess material that flows from her dress. In La Maison Noir this is depicted by a matriarch figure dressed in a rich red tone where in Spirit, the woman is played by Beyoncé draped in royal blue.

In terms of choreography, characters in La Maison Noir and Spirit appear in the same formation —either in a square, single file or circle — behind the protagonist where they perform the same movements.

Behind the creative direction

La Maison Noir, directed by Ilunga and Nembhard, represents the birth, death and rebirth of the artist.

Leading up to the visual album’s release in 2018, Nembhard told the M&G how while Ilunga worked on the music, she conceptualised the corresponding visuals. “La Maison Noir/The Black House [the visual album] is a pilgrimage through Yannick’s life since he was an adolescent up to now. It’s basically about putting one step in front of the other. But it’s also a visual interpretation of what being black means to us.”

Leading up to the release of the remake of the Lion King, US television network ABC broadcast a Lion King special, titled Can You Feel The Love Tonight.

In it news anchor Robin Roberts conducted an exclusive interview with Knowles to discuss her participation in the film, as well as the companion album, The Gift.

During the interview, Knowles explained that: “The concept of the [Spirit] video is to show how God is the painter. Natural beauty and nature needs no art direction. It’s the beauty of colour, the beauty of melanin and the beauty of tradition.” 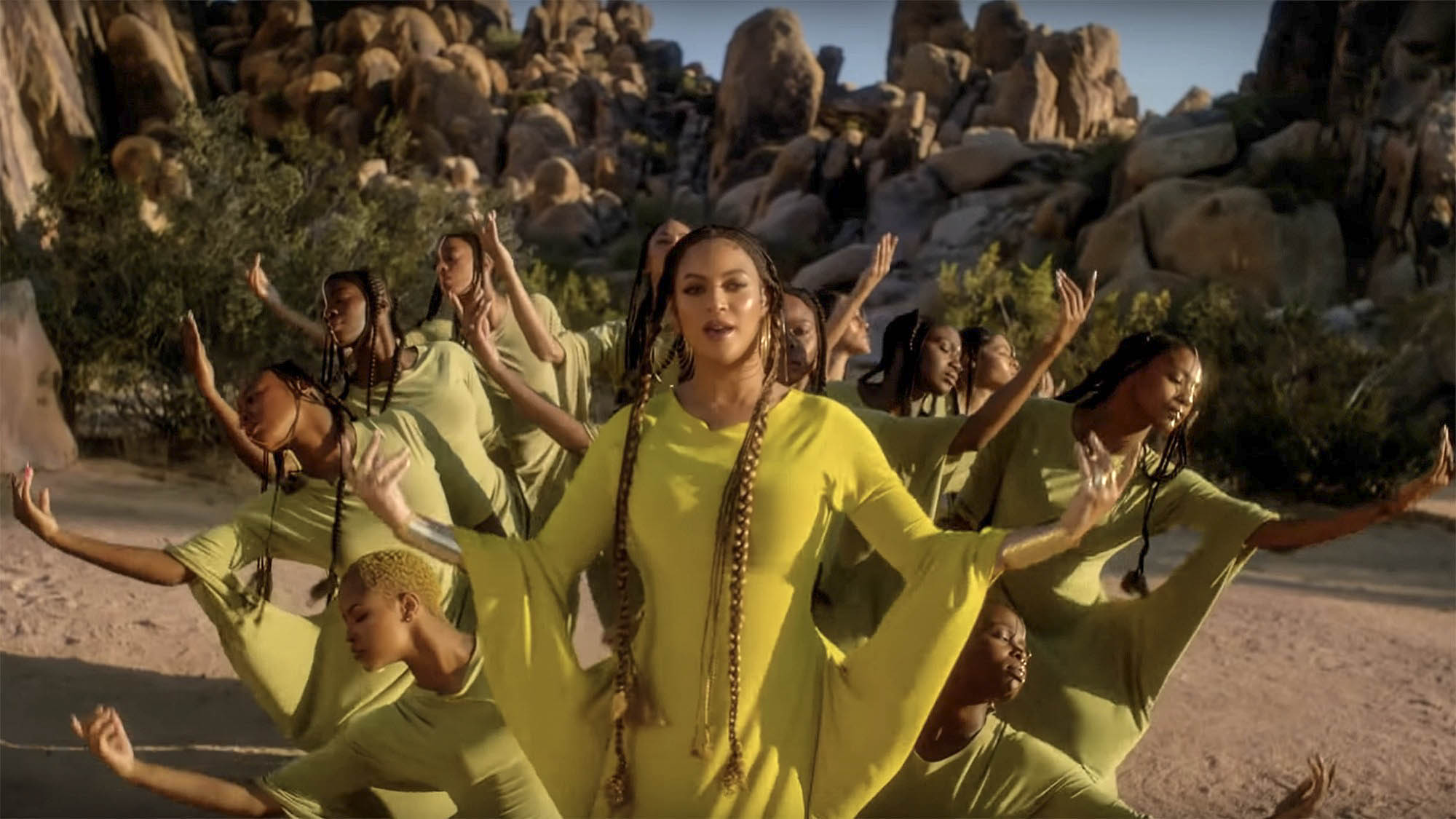 One of the arguably more salient similarities between the two works is the colour palette and material textures used in the wardrobes. (From Beyonce’s Spirit Video)

Spirit was directed by Jake Nava, the white British director who is also behind other Knowles music videos, including Crazy in Love, Flawless, Grown Woman and Partition. Spirit seems to explore themes of motherhood, femininity and a sense of community while the works above explore sexual agency, relationships, independence and individuality. In comparison to the themes covered in their previous works, Spirit appears to be an outlier for a Knowles and Nava collaboration.

However, it could also be argued that Spirit took its inspiration from elsewhere. Perhaps the desert setting was informed by that of the Lion King’s fictitious Pride Rock. Perhaps Solange had an influence on the project, considering that her visual album When I Get Home (2019) showcased similar settings, choreography and formations. Perhaps La Maison Noir was one of many references that went into storyboarding for Spirit. 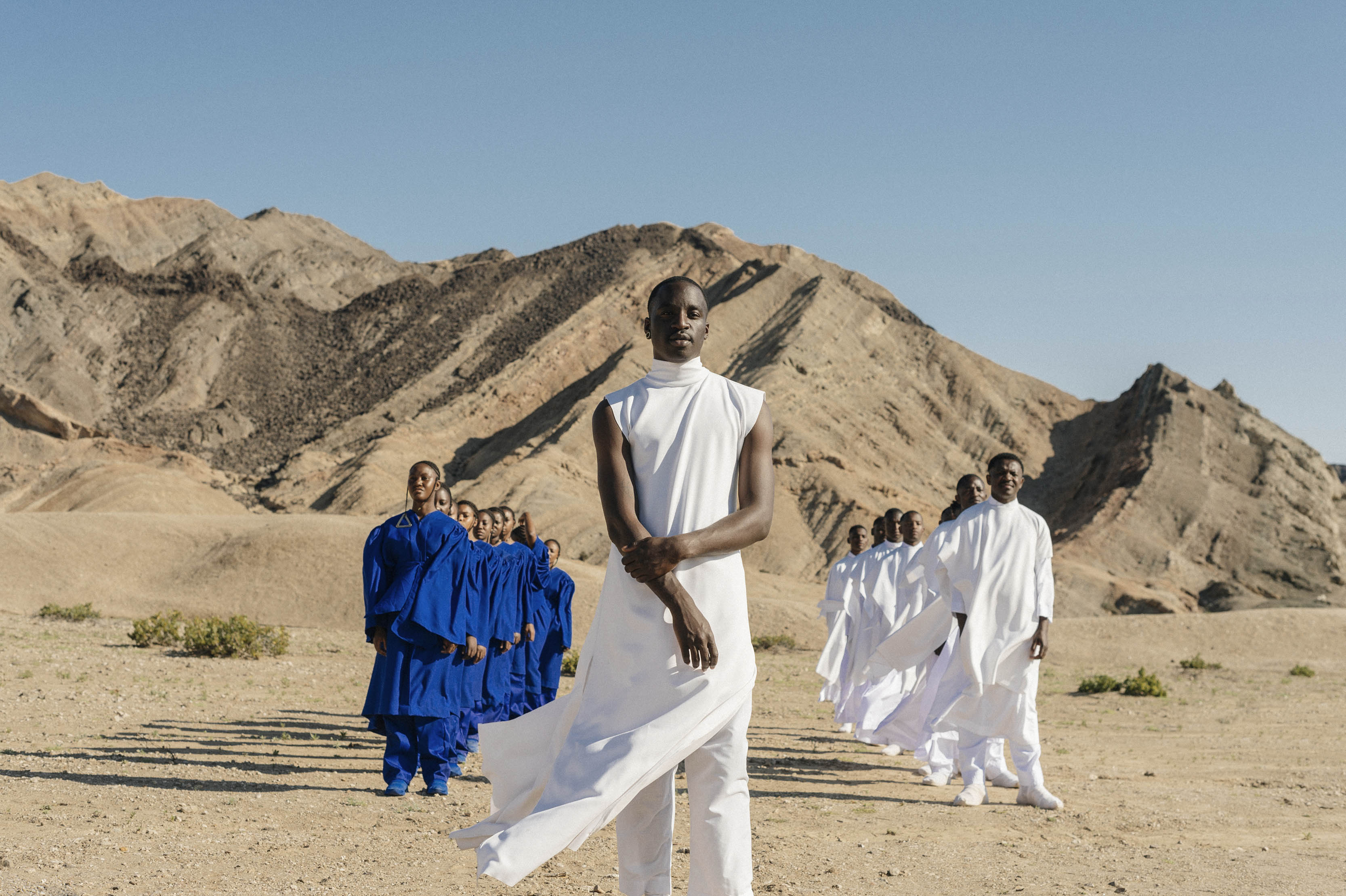 Last year the official On The Run Tour II poster mimicked a scene from Touki Bouki. The picture sees Jay-Z and Beyoncé sitting on a motorbike embellished with a long-horned bull’s skull similar to the one that Mory and Anta, the lead characters of Touki Bouki, ride on. While multiple articles from reputable organisations reported on the Senegalese film’s influence on the poster, no such credit has been given by the US couple.

If credit is not given and there are markers of difference between similar works, how do we draw the line between inspiration and plagiarism? 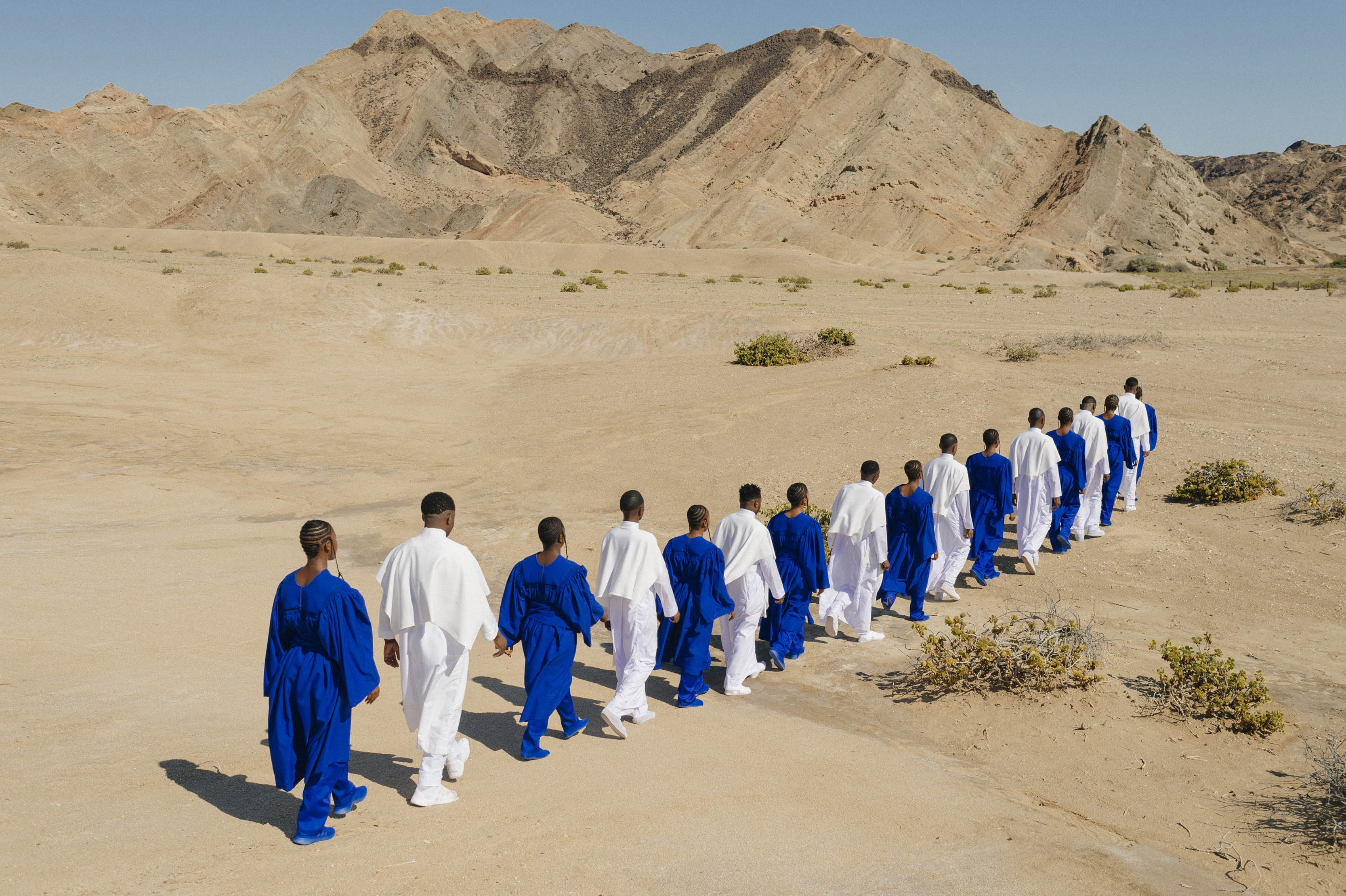 According to Nishan Singh, a partner at Adams & Adams who specialises in trademark and copyright law, copyright is infringed when, for example, a third party reproduces or adapts a work without licence or the authorisation of the copyright owner. If the essence of the work has been copied — as in the setting, costume design and choreography — it is considered an infringement and, as such, as plagiarism.

But who does the culpability lie with if the concept comes from the creative director and not necessarily the artist portraying the similarities? Singh says that if a work is created under employment it belongs to the employer, who, in the case of Spirit, is Beyoncé.

A similar case occurred last year when British-Liberain painter, Lina Iris Viktor pursued a case against Lamar and SZA when an almost exact copy of Viktor’s work from the series Constellations, as well as other motifs inspired by the artist, appeared in their music video All The Stars, a single taken from Black Panther: The Album. 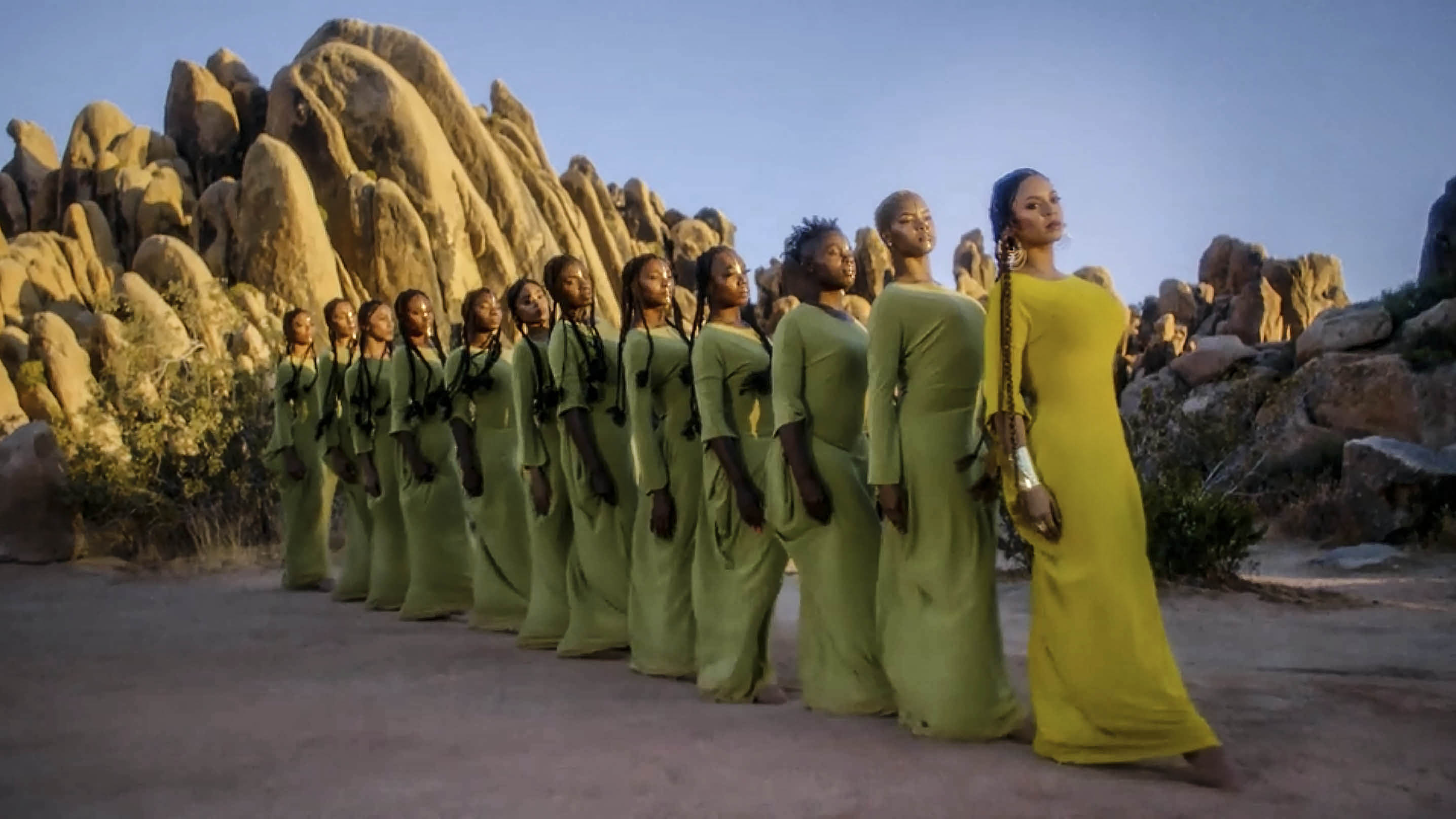 Spirit was shot in the Grand Canyon, Arizona. While the works were shot on different continents, they both depict an arid, mountainous, windy desert setting. (From Beyonce’s Spirit video)

The director of All the Stars, Dave Meyers, also came under fire when artist Vladimir Kush said visuals from Ariana Grande’s God is a Woman mimicked his paintings The Candle (1999) and The Candle II (2000).

This happened again with the Billie Eilish music video Bad Guy, in which many of the scenes have a likeness to a photo essay that Maurizio Cattelan and Pierpaolo Ferrari shot for Toiletpaper magazine.

After the release of All the Stars, Viktor told The New York Times that the producers went ahead with reproducing her work even after she had declined Marvel’s offers in 2016 and 2017 to use it in the film. She pursued legal action to receive “a public apology for the unauthorised use and a licence fee”. The two parties managed to settle the matter in December of 2018.

Last week Viktor, who is friends with Ilunga and Nembhard, commented on the matter on Instagram by reposting a slide show comparing La Maison Noir to Spirit. The slide show was taken from the Instagram account of Diet Prada, which highlights the many incidents of plagiarism in fashion and pop culture.

To accompany the slide show, a part of Viktor’s caption read: “Moreover, so ironic that all the films, musicians & participants who appear to champion and support the African continent now and all of its offerings, also feel entitled to steal from African artists in the process. I say ‘steal’ as it is NOT ‘inspiration’, nor ‘borrowing’, or a ‘homage’ to blatantly lift another’s work without their permission.”