Charges have been dropped against North West residents found with vast quantities of endangered species, while foreign nationals get a slap on the wrist before being forced out of the country.

In an unexpected move late last month, the National Prosecuting Authority (NPA) suddenly withdrew its case against three Klerksdorp men who were arrested last year in a crackdown on an alleged lion and tiger bone-and-body-parts syndicate. The withdrawal is another example of government talking hard about tackling poaching but not always following through with prosecutions, never mind tough convictions.

The police — when laying charges — said they believe the three operated in tandem with business partners and clients from Vietnam. That country is a conduit for the large-scale poaching of illegal species.

The withdrawal was forced by the Klerksdorp court’s refusal to grant the state a further trial postponement. At the end of June, the three accused’ alleged accomplices, who had spent seven months in police custody, were sentenced to fines totalling R86 000 and ordered to leave the country in three days.

Tembeka Mbadu, senior deputy director at the NPA in the North West, told the Mail & Guardian that the charges were withdrawn only provisionally. “Something new came up and the state requested a further postponement for further investigations, but this was refused by the court,” she said.

Last November, the case made international headlines after the Hawks released a series of grisly pictures showing butchered predator carcasses, skins, meat and bones they had seized in the takedown operation.

Acting on a tip-off, four police units, including members of Crime Intelligence and the Klerksdorp flying squad, nabbed eight of the suspected syndicate members red-handed when they flagged down their vehicles and a trailer on a remote stretch of road between Wolmaransstad and Dominionville.

Photographs of the trailer, towed behind a silver Lexus station wagon, showed it loaded with freshly cut meat and bones packed in plastic bags, industrial-sized pressure cookers and steel pots; a tiger skin; gas cylinders; gas burners; a saw; a compound bow; knives and other sharp instruments used to butcher predator carcasses and process the bones. 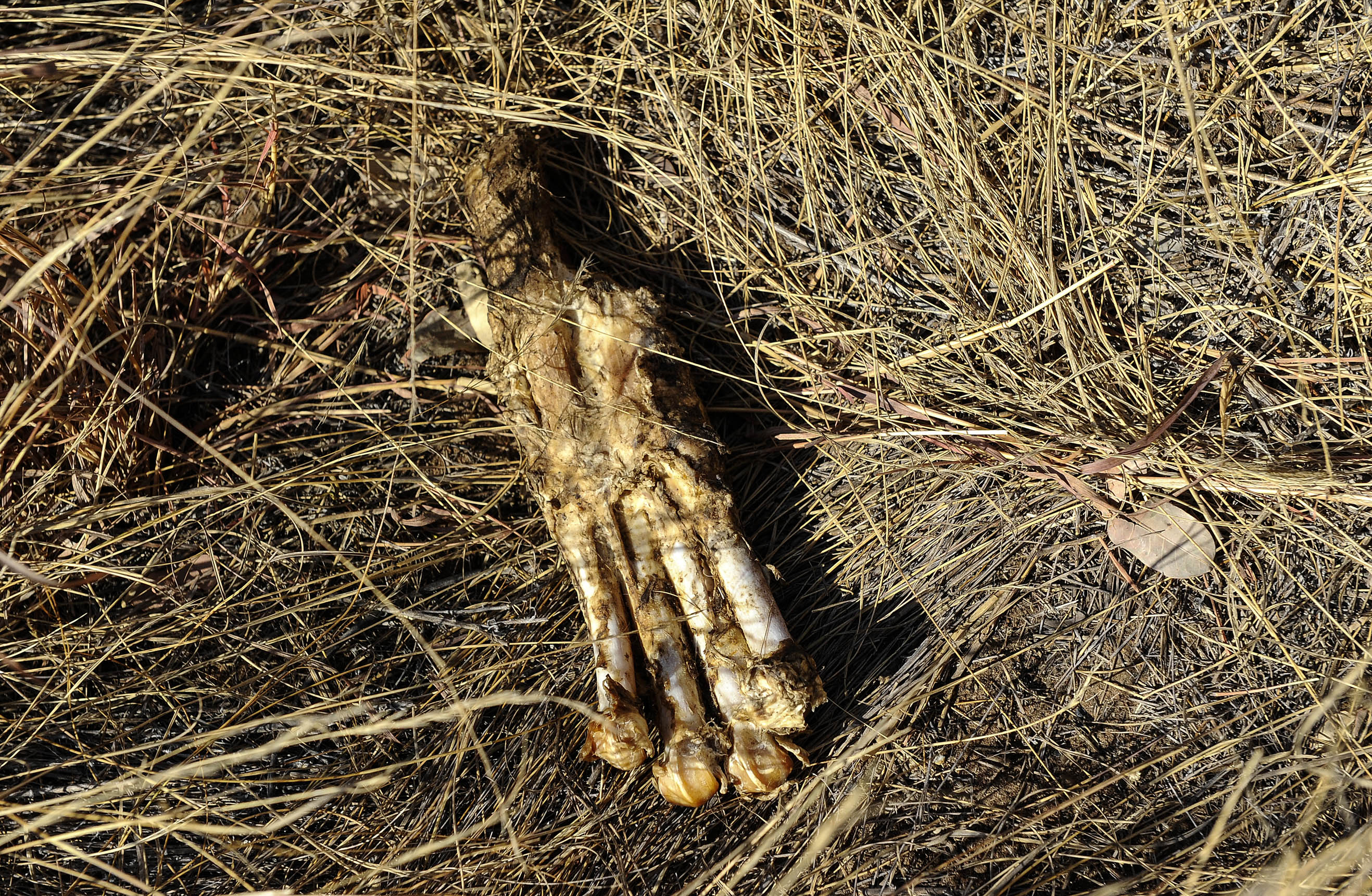 After arresting the eight people, police went to a rented farm between Klerksdorp and Wolmaransstad where they gathered more evidence including lion skins, burnt lion intestines and a butcher’s saw.

According to court records obtained from the bail application, labourers interviewed at the farm told the police about the gruesome series of events that led to the arrest.

A ninth suspect handed himself in to law enforcement authorities two days after the arrests. He had rented the farm, Klippan, where 14 lions and two tigers were allegedly slaughtered the weekend that the arrests were made. The M&G understands that the big cats that were slaughtered at the property arrived there heavily sedated.

The nine suspects were charged with contravening section 57(1) of the National Environmental Management: Biodiversity Act. The charges included possessing and or having physical control of lion bones, lion meat and lion teeth. 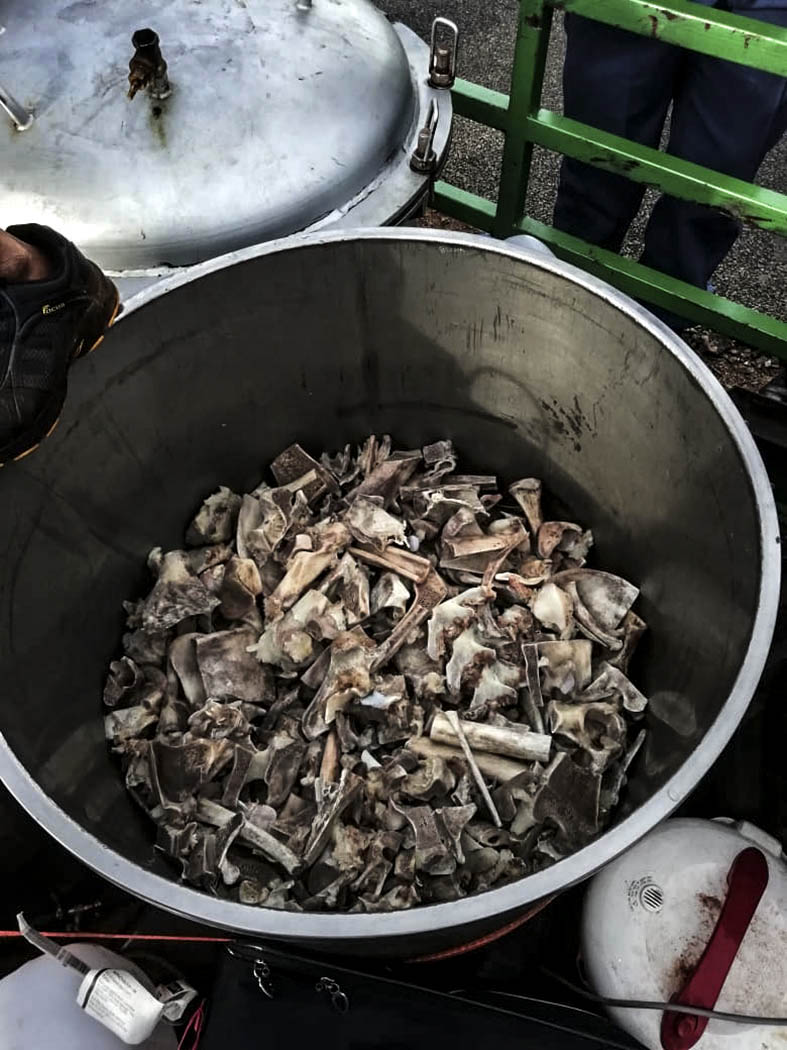 Charges against the three Klerksdorp men, Louis Fouche, Louwrens Pretorius and Frikkie Fouche were dropped provisionally. They were warned to reappear when charges are reinstated by the state.

After plea bargain agreements were accepted by the court in June, it sentenced Pham Xuan Chanh and Nguyen Van Tuan to fines of R8 000, or 12 months imprisonment. Nguyen Huu Son was fined R50 000, or two years imprisonment. Dao The Thanh, and Pham Van Khue each paid a R10 000 admission of guilt fine in lieu of serving three months in prison.

Pressed to explain the disparity in sentences, the NPA told M&G that its conclusion was that, “from the evidence available, Nguyen Huu Son played a more significant role in the offence, to facilitate the event and debone the carcasses as [sic] the rest of the accused.”

The NPA said charges were dropped against another suspect, Cu Quoc Thang, 60, who is understood to be a retired Vietnamese police colonel, after he turned state witness: “The state withdrew the charges as a result of a statement he provided, wherein very valuable information was provided in order to assist the State in the investigation.

In other sworn affidavits, three of the accused claimed they came to South Africa looking for business opportunities, to visit game farms and other tourist attractions. Their defence attorney submitted that they were merely tourists who were caught in the wrong place at the wrong time.

In other sworn affidavits, three of the accused claimed they came to South Africa looking for business opportunities, to visit game farms and other tourist attractions. Their defence attorney submitted that they were merely tourists who were caught in the wrong place at the wrong time.

The leniency of the sentences and fines was questioned by one of South Africa’s leading environmental lawyers, Jeremy Ridl. He told the M&G that: “These sentences are so light, they induce a sense of shock, particularly given the seriousness and prevalence of the offence.”

“Far more punitive sentences have been handed out for simple poaching cases, such as rural people hunting for meat and skins — ‘subsistence poaching’ of common animals. This is what makes the sentence in this case shocking, as it is so disproportionate.”

Illegal hunting and trade in endangered species is a market worth as much as $23-million a year, according to the United Nations. In South Africa, the people arrested tend to be lower down the chain — with the buyers and consumers working overseas. The NPA and other government bodies have consistently targeted those people higher up the network for arrest.

Michele Pickover, director of the animal rights EMS Foundation, called the case “a serious indictment” on the department of environmental affairs. “It highlights what we have been saying all along about how the legal trade in lion bones has spawned a parallel illegal market that has been operating under the radar for years and untouched until recently,” she said.

“That South African courts are unwilling to impose appropriate sentences is appalling. If our courts are unable or unwilling to deal with these cases in a meaningful manner, how can we trust the department of environmental affairs and provincial conservation officials to enforce compliance over the legal lion bone trade?” Pickover asked.