Sarah Rabotapi once viewed the logo of the Community Work Programme (CWP) on the right shoulder of her orange overalls as a promise of a better life.

“You know my dream, neh, because that logo is the logo of the government, I thought that in this time, in these nine years, I would be driving my own car. And I would have my own house, because we are working under government,” she says.

Rabotapi drags out each sentence, punctuating them with long, mournful sighs. “But we live in shacks and we’re still using pit toilets. And I am getting older every day. I can’t even make a legacy for my children and my grandchildren.”

She is among the more than 250 000 people employed by the programme, which boasts the slogan: “Restoring dignity through work opportunities.”

The CWP was set up by the government in 2010 as part of its efforts to address poverty resulting from stubborn unemployment by offering a “job safety net” to people of working age.

But now, nearly a decade since the programme was established and with unemployment at a 16-year high, the workers are restless and calling on the government to pay them more money.

In June, hundreds of people dressed in orange overalls marched to the department of co-operative governance and traditional affairs’ headquarters in Pretoria, demanding more work days and a minimum wage of R20 an hour.

Those who work as home-based carers, vegetable gardeners, scholar patrollers, waste pickers and grass cutters and are paid a R780 stipend for working eight days in a month. Supervisors and storekeepers get R2 500 for working 20 days in a month. They are threatening to march on the ANC headquarters at Luthuli House next week if the department fails to heed their calls.

Rabotapi, who lives in Slovo Park, an informal settlement south of Eldorado Park in Johannesburg, has worked in the programme since its inception. Back in 2010, the stipend was R400 a month. 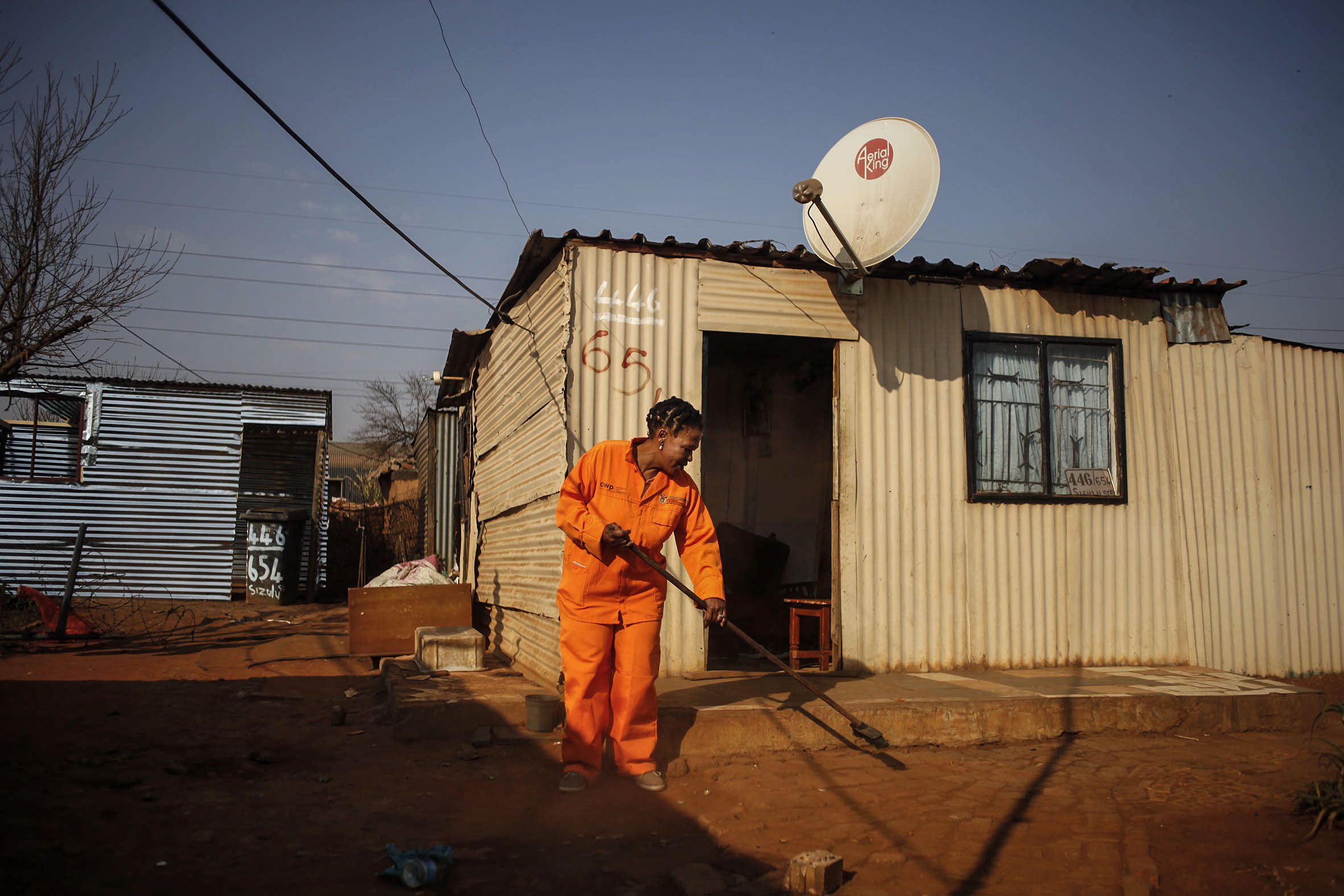 According to Statistics South Africa’s recently-released report on national poverty lines, a person needs an income of at least R810 to afford food and other basic necessities such as clothing and shelter.

This is calculated using reference households living on “survival foods” and sacrificing some basic foods to afford the “austere minimum” expenditure on non-food basic needs, the Stats SA report notes.

Palesa Ndarala, who has been in the CWP for eight years, says being paid the R20 an hour minimum wage for a 20-hour work week “would make a huge difference”.

“It is not ideal, but it is something,” she says. “And we would actually know how to use it because we have been trying to survive with the little we get now.”

The mother of one, who lives in Discovery in Roodepoort, says she would use the extra money to pursue tertiary education.

“I would no longer have an excuse not to go to school. Because now when I’m asked, ‘Why are you not bettering yourself?’ I say: ‘It’s simple. I don’t have any money.’ Even now, if you could see my hair, if you could see my nails, you would swear that I am just a nobody.”

Like the Expanded Public Works Programme, another government-funded initiative aimed at alleviating poverty, the CWP is not subject to the R20 an hour minimum wage.

Department of co-operative governance and traditional affairs spokesperson Lungi Mtshali said workers in the programme are paid slightly higher than the minimum wage of R11 an hour for public or community service workers as set out in the National Minimum Wage Act.

“The question of increasing the minimum working hours is not part of the current model,” he added.

The CWP has, in recent months, been a thorn in the side of the co-operative governance department. According to its 2018 audit outcomes, there was a 70% increase in irregular expenditure by the department, a large part of which was a result of repeat transgressions at the programme.

One such transgression was the continued payment of workers who have died.

CWP workers want the department to cut out the middlemen, the companies paid by government to implement the programme across municipalities.

Mtshali said the appointment of implementing agents “is premised on the desired partnerships between government, civil society and communities and is part of the design of the current model”.

Last month, Minister Nkosazana Dlamini-Zuma announced in her budget vote speech the department’s plan to change the management and model of the programme from the 2020-2021 financial year.

Mtshali said the department was still in the process of reviewing the model and could not say what the changes would be.

Last week’s StatsSA’s quarterly labour force survey for the second quarter of 2019 laid bare the country’s deepening unemployment crisis. According to the report, 6.7-million (29%) South Africans are unemployed. By the expanded definition of unemployment — which factors in people who have given up on finding work — more than 10-million people are jobless, or 38.5% of people who could be working.

Mtshali said one of the key design features of the CWP is the flexibility of participation where people can be part of the programme as long as they are looking for permanent employment.

The workers who spoke to the Mail & Guardian said they expected their work in the programme to lead to other work opportunities in government. Despite having completed courses relating to a variety of public services, their time has not translated into permanent jobs in government.

The CWP was, however, not set up as a permanent employment solution.

But, like Rabotapi and Ndarala, many workers have been in the programme for years and say they have struggled to find work elsewhere.

Speaking to the M&G on August 1, Victoria Mtabane said her R780 stipend had already run dry. As the programme intends, she has been trying to find work elsewhere, but has had no luck. “When I go look for work, I am asked about my experience. But that is experience that I have wasted working at CWP. There is nothing promising.”

If things don’t get better, Mtabane said she is worried about what will happen to her two children. “Even if I die, there is nothing left for my kids from this R780 I get.”

With little hope of things improving in the future, she said: “When I die, I will be given a pauper’s burial. But I am a South African citizen. I am voting every five years. There is no change.”