When your friends become your crew

It’s just after 10am when I make it to a complex in Midrand. I’m making my way to the first location for a film that was written last night, will be shot today, and have a final cut tomorrow. Each film has to be seven minutes long. This is the challenge that directors across Gauteng took over the long weekend beginning on August 8, under the guidelines of the 48-Hour Film Project.

Founded by filmmakers Mark Ruppert and Liz Langston in Washington D.C. in 2001, the challenge looks to highlight the importance of teamwork in filmmaking, while advancing the process by opening it up at varying levels of the profession. On Women’s Day, around 6pm, the directors who registered for the challenge met with the coordinators and drew a genre from a hat. They were then given a character, prop and line that had to be included in the film.

“First of all, thank you for all coming to support this passion project of ours, says Rati Mofokeng, the director whose crew and cast I follow for the challenge.

“The whole point is to participate in this 48-hour film challenge. Hopefully, by the end of this day, we will be done shooting, crossing fingers and touching wood, so that we can begin editing tonight.”

In 2018, he won a South African film and television award for directing New Era Sessions, a visual album accompanying rapper Rouge’s debut eponymous EP. Mofokeng’s 48-hour challenge film, Blood in Blood Out, is an action thriller where the death of an underground ring’s leader, Ntate Tau, sees an unlikely leader taking over, following a bloody battle for his succession.

To put his crew together, Mofokeng put out a call on Whatsapp. Some friends, old colleagues, his cousins, uncle, aunt and his niece answered the call. “There were a lot of volunteers, people who weren’t necessarily in the film industry who wanted to be involved. But I also needed a technical crew with experience because of the short amount of time we had. And so I married the two sides,” Mofokeng explains to me in a conversation over Whatsapp. In addition to Mofokeng, the technical team he speaks of includes colleagues from production house Callback Dreams as well as post production specialist Kayode Raji. The cast includes Mpule Matlhola from Mzansi Magic series The Republic, Bohang Moeko from series Ring of Lies and television personality Lalla Hirayama.

After a warm “we’re here to have fun” speech, Mofokeng walks us through our schedule for the day as we eat and drink the final mouthfuls of the vetkoeks and coffee that the homeowners have provided.

First on the agenda, the thespians sit around a dining table, reading and adjusting the script so that it fits each character. In the background all idle hands work on moving unnecessary furniture out of sight and mapping out the lighting downstairs. Others carry racks, clothes, suitcases and makeup cases up a flight of stairs where hair, makeup and wardrobe will be. The rest sit quietly, listening as the dialogue of the scene develops.

Given that only a handful of Mofokeng’s team specialises in filmmaking, there are varying levels of team participation. However, all those who are not filming, directing, doing wardrobe, sound or acting are on standby as runners. If something needs carrying, a thespian has to be fetched, food needs to be made or the toy guns have to be spray painted for a more realistic aesthetic, there are free hands. This frees up time for the director, crew and cast to focus on the final product. 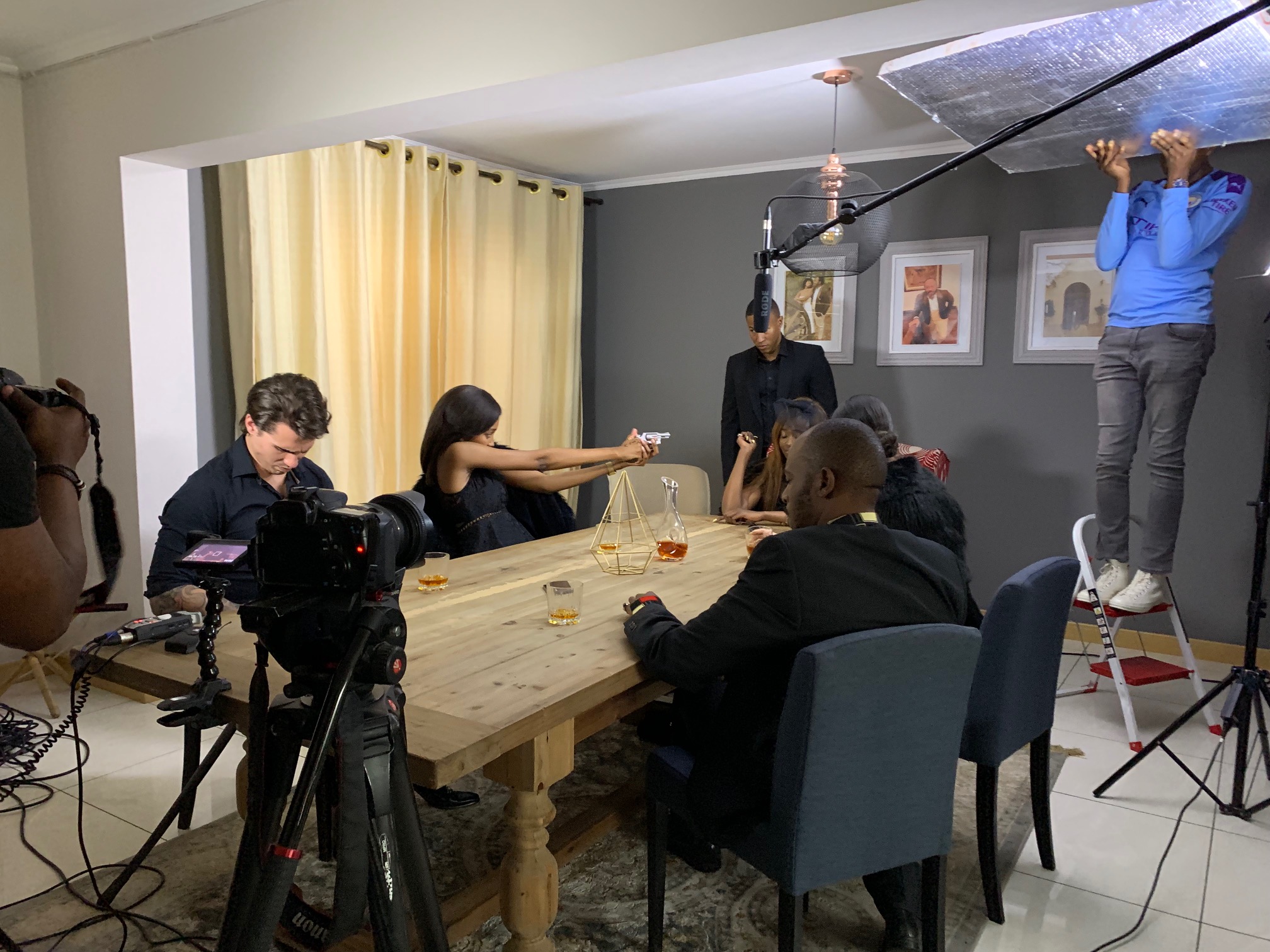 Behind the scenes: The cast for Rati Mofokeng’s short film ‘Blood in Blood out’ in between takes on set. (Supplied)

Once rehearsals are through and lunch is served, the director briefs the director of photography on how the shooting will unfold.

The plan is to shoot the same scene from three different angles. Each angle is to be shot three times. In addition to the nine takes, Mofokeng instructs the videographer to shoot one extra take of cutaway.

The multiple retakes are because the cast and crew can hardly contain their laughter on set while trying to figure out how to carry out the thriller and action genres without special effects and the budget for any. Seeing that both Mofokeng and his editor have years of experience in editing, such cracks are filled in the editing suite. And to avoid unrealistic blood challenges, most deaths in Blood In Blood Out are as a result of poison or strangulation. 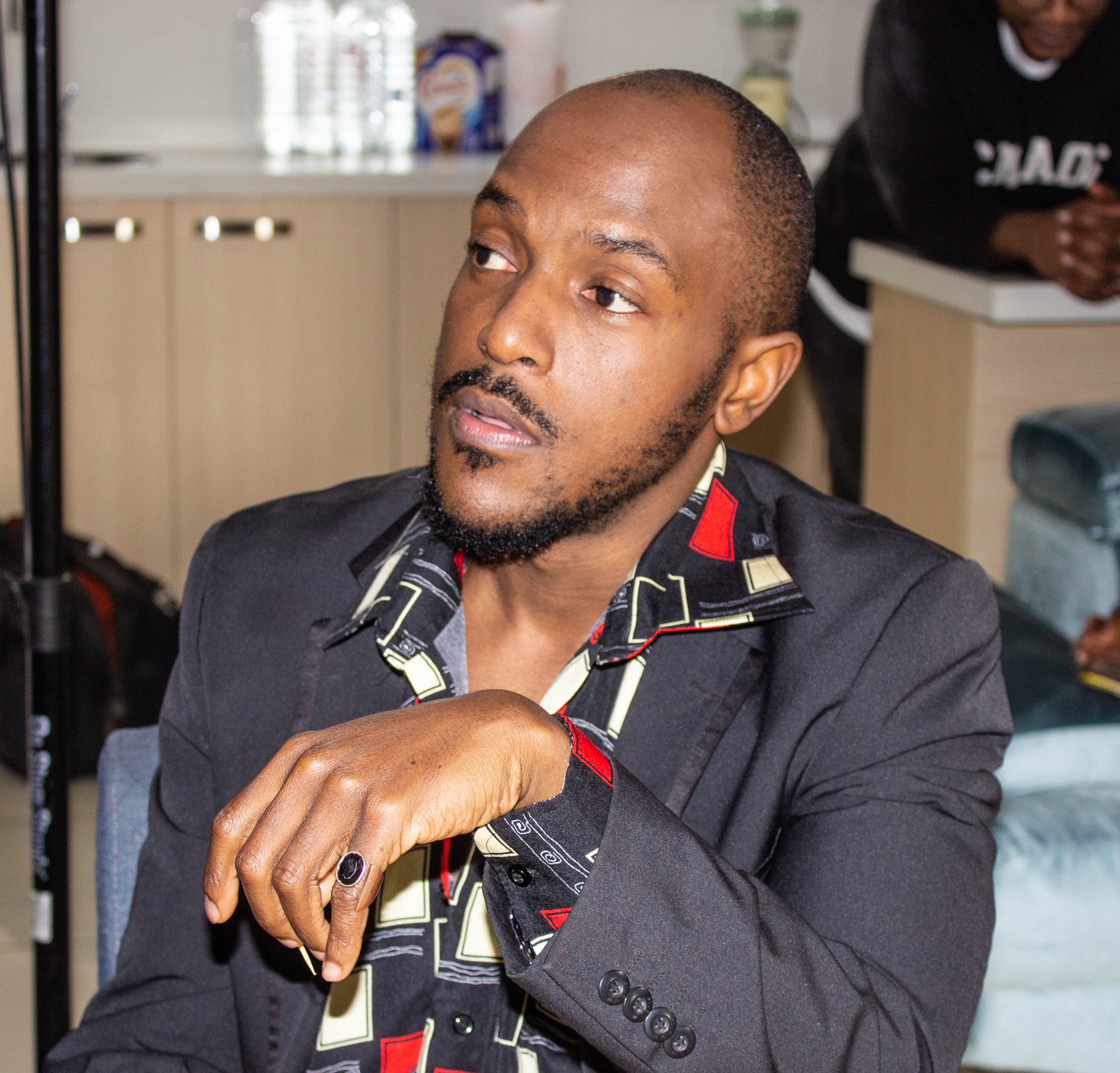 Rati Mofokeng doubles as the director and one of the characters in the film Blood in Blood Out. (Ntsiki Tladi)

At first, the plan is to shoot at the first location for no longer than an hour. But after planning to be out of the house by 3pm, the crew and cast only manages to drive off to the second location shortly before 7pm. There’s just under 24 hours to go before the film has to be submitted. After 1am, when all filming has been wrapped up, Mofokeng makes his way to the editing suite. They make the cut with just ten minutes to spare. This will be Mofokeng’s big screen debut as a director.

During our post-production Whatsapp talk, Mofokeng highlights the lessons this challenge has taught him about making a film on a low budget with a time constraint. His largest takeaways are the importance of knowing people who will give you access to resources and spaces that would normally need money, and making sure that all parties are involved in the filmmaking process from the beginning, to avoid a broken telephone scenario in post production. “It’s impossible for you to wear all the hats. I planned, directed, acted, edited and I dropped it off. It was a recipe for burnout,” says Mofokeng, “By the time we were editing, I got too tired and I was slowing the whole process down and no one else knew the workings through and through like I did.”

Now that the final cuts have been sent through, directors, their casts and crews look forward to the bragging rights that come with seeing their names on the big screen when the films’ final credits roll out. For Mofokeng, the final cut and his name on the screen stand as proof that words can manifest into something bigger. “A lot of us get stuck in the conversation part of doing things. We never get to the creating part. Conversations are great but they mean nothing when they remain only that. My biggest lesson is to stop wasting time with the conversations around creating something. ”

Films will be screened at Mall of Africa’s Ster Kinekor theatres. For more information visit Ster-Kinekor

Finding your niche with Rouge