Khayelitsha’s people are still in the dangerous dark

Five years after a commission of inquiry into policing issued recommendations on how to make the Cape Flats township safer, Lester Kiewit talks to residents about whether the situation has changed

‘Staying in Khayelitsha you learn to live with the fact that you live with guns and knives, and you will get robbed at some point,” says Andiswa Mcyiwazo, who makes the perilous journey from her home to the bus stop in the dark every weekday.

It is a 15-minute walk she has to do all over again when she returns from work in the evening.

Although the main roads are filled with cars and taxis, it’s the dark alleys between houses and shacks that present a danger.

Mcyiwazo, who works as a data capturer for an insurance company in Tyger Valley, is just one of the many thousands of people in Cape Town’s largest township who have become victims of crime.

“Where I live we do have street lights, but I have to walk past an informal settlement to get to a bus stop. They don’t have lights there,” she says. “I have to ask someone to walk with me. As a woman, you don’t go alone. It’s even dangerous when it’s daylight, so imagine when it is dark.”

The problem of inadequate public lighting was raised at the Khayelitsha Commission of Inquiry into Policing as a factor contributing to high levels of violent crime. 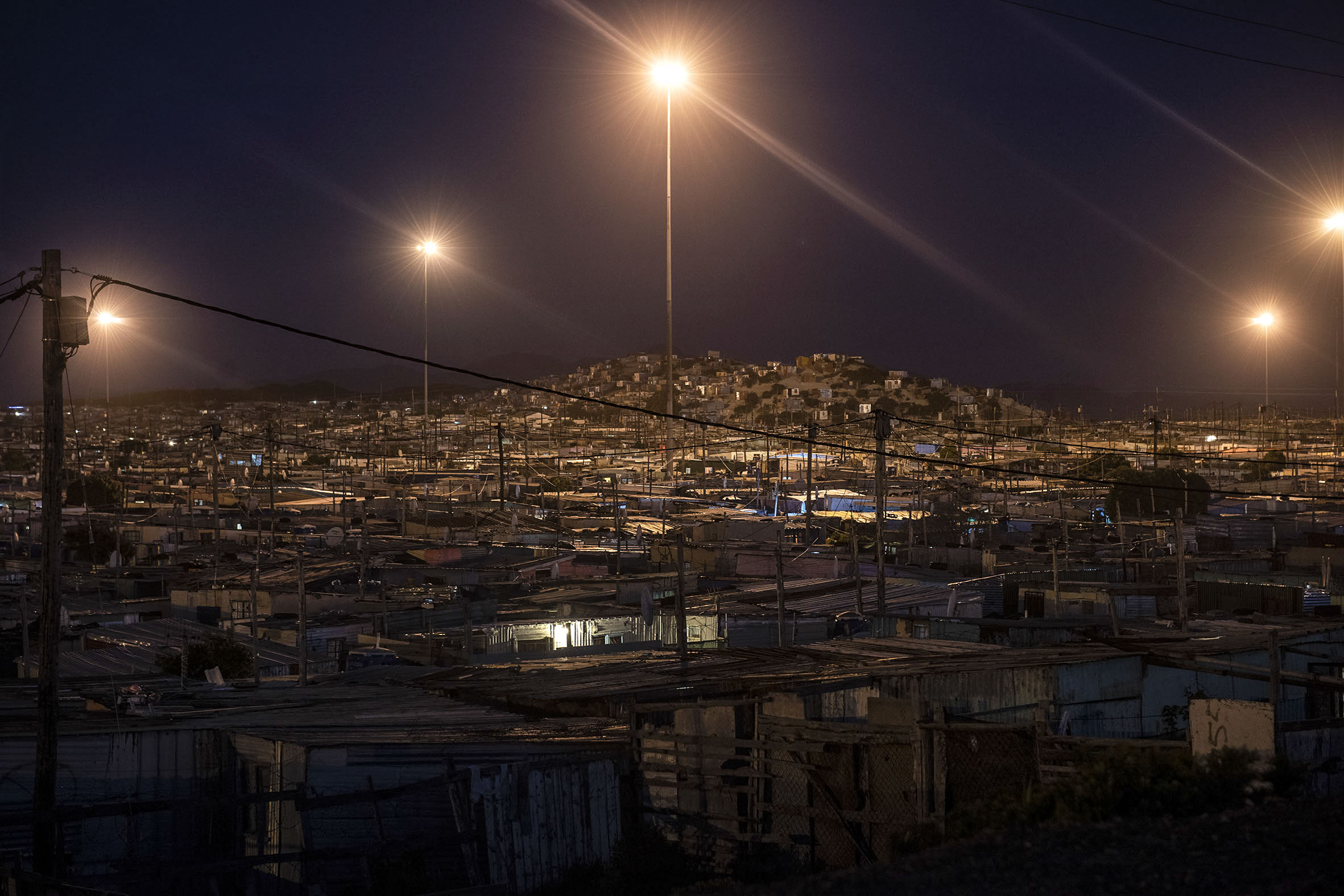 Incandescent: Lights on masts cast a bright glow but residents and police say they don’t light up the alleys between shacks. (David Harrison/M&G)

Mcyiwazo says a week doesn’t go by without her hearing about a mugging.

“I have been robbed. I wasn’t hurt physically, but it affected me emotionally. They pointed a gun at me. The thing is I had to walk that same route the next day. It is everyday life. You just have to get used to it, because I can’t stay out of work. There’s no counselling. You have to counsel yourself,” she says.

She travels 20km to work using a public transport system that is under strain. “I work from eight in the morning to five in the evening. I take a bus [from Tyger Valley] to Belville. Then wait for another bus to Khayelitsha. So I only get home after six. In winter it’s already dark by then. It’s a 15-minute walk to my house, and in that time anything can happen,” she says.

“People won’t do anything to help. It’s everyday life. Crime doesn’t wait to happen on special occasions. It is every day.”

Mcyiwazo says she fears for the safety of her four-year-old the most. Too afraid to have someone walk her to playschool, she pays someone with a car to pick the child up. “I have to get transport to take my child to school. I don’t want to put other people’s lives at risk by asking them to walk my child.”

Siviwe Somafu is less fortunate than Mcyiwazo. She lives in an informal settlement near Khayelitsha’s Solomon Mahlangu section where there is no street lighting. Instead, a tall mast radiates light over the area.

But the shacks are packed so close to one another that the mast lighting does not illuminate the passages between the structures. They become dark, no-go areas.

The only other sources of light are open fires that cast a mustard-coloured haze at night.

Somafu is standing on the side of the road watching Eskom workers dismantle illegal electricity connections to shacks in her area. 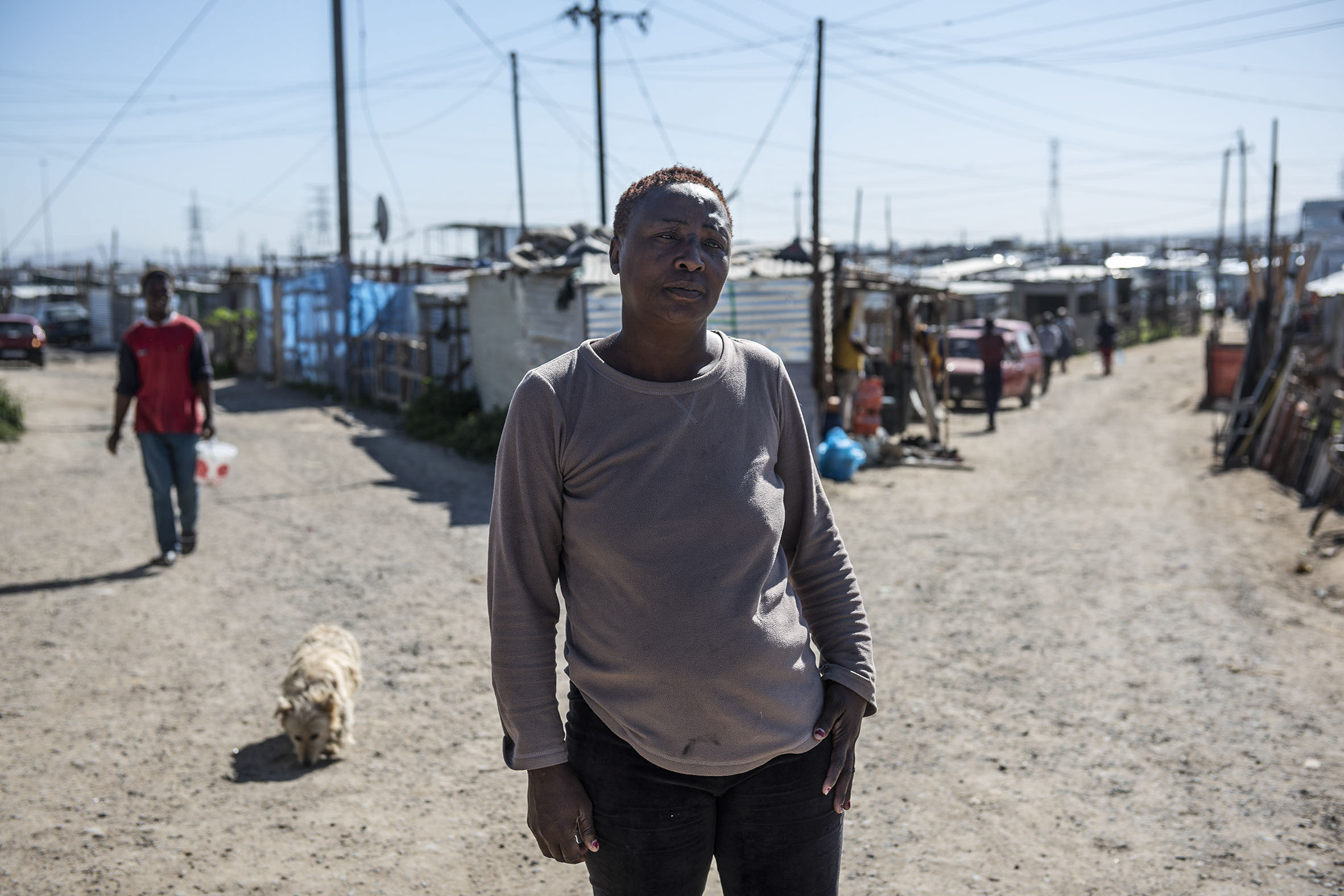 On guard: Siviwe Somafu is one of thousands of people who have been attacked and robbed in Khayelitsha. (David Harrison/M&G)

The workers are being guarded by South African National Defence Force personnel, who have been sent to Cape Town to back up anti-crime operations.

“We deserve everything that everyone else has, like electricity, water, and toilets. No one cares about us. So we decided to do illegal operations for electricity,” she says.

“People are suffering in this informal settlement,” she says, cursing as she watches another wooden pole with rudimentary wiring come down.

Somafu says she too was a victim of a crime when she was walking to work early one morning.

“When you leave in the morning for work it is dangerous. I once left for work in the morning, and they attacked me. I couldn’t even identify them because it was so dark,” she bemoans.

She didn’t open a case at the police station because she saw no point in doing so.

Like many, it is the children, especially girls, she is most worried about — particularly those who have to leave before dawn to get to school some distance away.

“I’m terrified to leave my house when it is dark. We are victims. We are like prey for the gangsters and skollies. We are forced to stay indoors at night,” Somafu says. “But it’s the children who are victims of rape. We know of children who were taken without anybody noticing because it was dark.”

The Khayelitsha commission of inquiry was appointed by former Western Cape premier Helen Zille to investigate alleged inefficiency of police officers at the three stations in Khayelitsha and by other police units in the township, as well as the breakdown in relations between residents and members of the South African Police Service.

Khayelitsha has one of the highest rates of crime in South Africa.

Its policing districts of Site B, Harare and Lingelethu West investigated 192 murders in 2018. In addition, 186 sexual offences and 1 294 cases of robbery with aggravated circumstances were reported in the same period.

Former Constitutional Court judge Kate O’Regan and former national director of public prosecutions advocate Vusi Pikoli presided over the two-year process, whereby residents spoke of how their lives were affected by crime and how police failed to help them.

The two commissioners heard graphic descriptions of vigilante attacks and the necklacing with a burning tyre of suspected criminals.

O’Regan and Pikoli also heard how inadequate urban development, including housing, contributed to police not being able to do their work.

Police officers told the commission about how they often hesitated to enter informal settlements because the paths were not big enough for their vehicles and they were wary of making their way to a complaint on foot and in the dark.

Officers said that their ability to adequately respond to criminal activity was hampered by poor lighting, road infrastructure and informal housing.

Civil society groups such as the Social Justice Coalition (SJC) were at the forefront of calling for the inquiry, and for the commission’s recommendations to be implemented.

The coalition’s general secretary, Axolile Notywala, claims the City of Cape Town has made little progress in making policing easier. “Five years after the commission there hasn’t been much that has changed in public lighting, not only in Khayelitsha but other townships as well.”

He adds: “And it’s not only in the informal settlements. Even in the formal areas where it would be easy to install effective streetlights, there are no streetlights.”

The coalition says high mast lighting is ineffective and harks back to the apartheid era.

“These were lights that were installed for surveillance purposes and not for safety purposes. They weren’t installed for people to be safe, but for the police force to monitor people’s movements,” says Notywala.

But the City of Cape Town dismisses the coalition’s criticism, saying that in informal settlements there is limited space and high masts are the most effective way to provide lighting in these areas.

“The SJC is saying the high mast lights are not welcome. But other stakeholders like the Khayelitsha Development Forum are saying please build these high mast lights,” says Cape Town’s mayoral committee member for energy and climate change, Phindile Maxiti.

“It’s the most resistant type of lighting when it comes to vandalism. It is the streetlights that are vandalised. On roads leading into Khayelitsha, all those lights have all been damaged,” he adds.

Maxiti says it’s not feasible to install street lighting in areas where there are no roads or sidewalks. 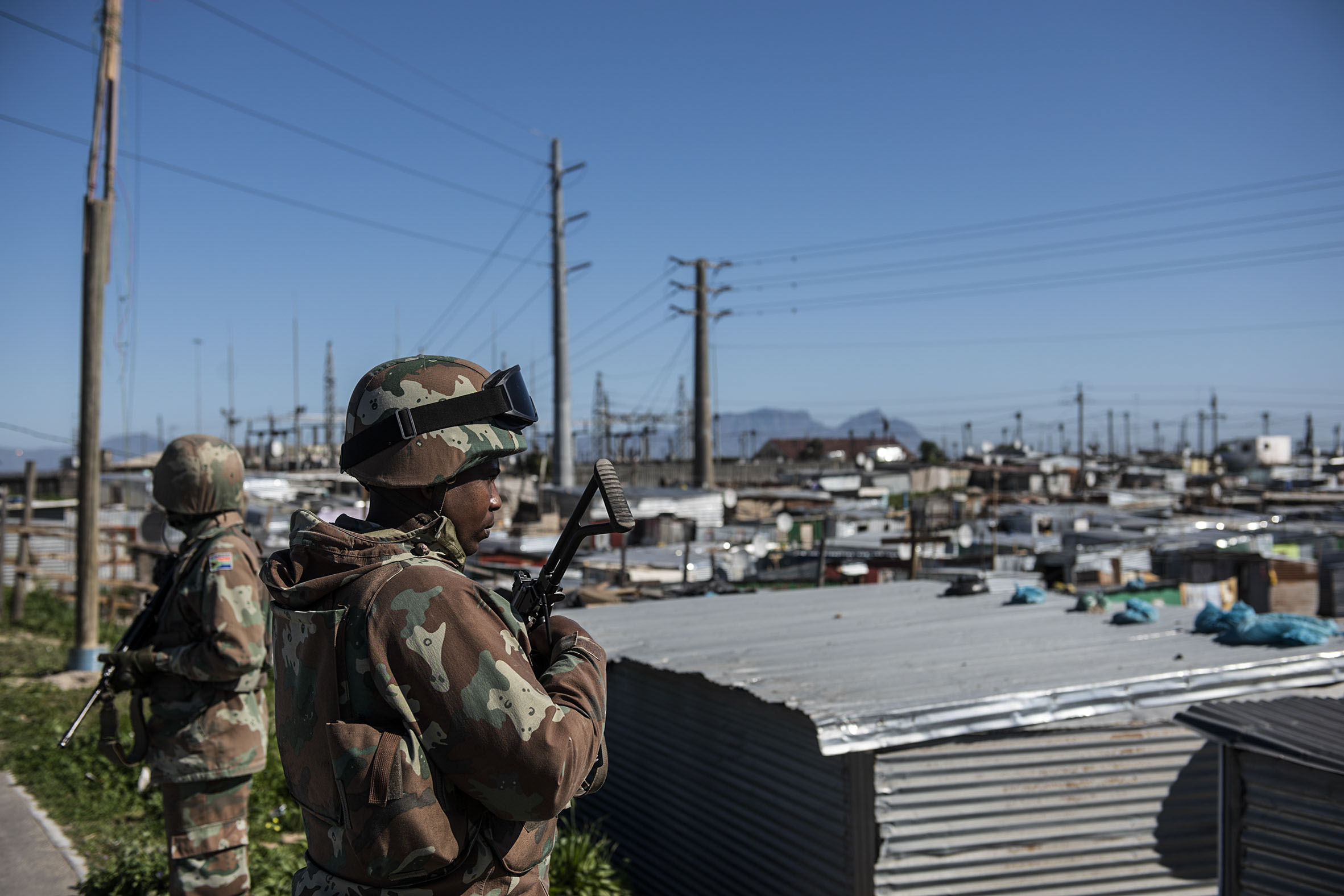 Violent and other crimes are so commonplace on the Cape Flats that the South African National Defence Force is now providing backup to police officers. (David Harrison/M&G)

“It will be impossible for us to build conventional streetlights in informal areas because there are no spaces. Even the high mast lights we must negotiate with community leaders to open up space for us so that we can build. Space is a big challenge.”

Maxiti says a lighting master plan has been developed for the city which will be rolled out soon.

Over the past four financial years, 134 street lights and 10 high mast lights had been installed in various areas.

“We’ve had a plan that started in the 2018-19 financial year that will go on till 2023. In this master plan, which never existed before, we agreed to assess which areas still need lighting and what type of lighting is best suited for that area. It’s not a one-day thing, it’s a process,’ Maxiti says.

The SJC’s Notywala says although the coalition is opposed to high mast lighting, this is only on public land; it is open to reach a compromise with the City of Cape Town, especially when it comes to providing services for settlements on private land.

“The city still has a responsibility to provide services even if informal settlements are on private land. In those cases, they can install the high mast lights, we can negotiate. But it must be a temporary measure.”

He says the safety of residents must come first — especially when even the police are too afraid to enter certain areas of the township.

“In Samora Machel [in Philippi] police were shot at. They [the police] refuse to enter because it puts their lives in danger as well,” Notywala says.

But he says he does not blame police officers for considering their own safety. He blames national police leaders for not equipping law enforcement officers on the ground.

“So this is also a failure by the national police commissioner and minister,” he says.

But the SJC says the problem goes much deeper than providing lighting and making accessible pathways in informal settlements. The coalition notes systemic failures in governance and service delivery, which affects the mainly poor and black people who live on the Cape Flats.

They have no choice but to make use of a crumbling public transport system and rely on a demotivated police service to protect them from criminals.

“We have seen the blame game between the city, the province and the national government. These issues are systemic. They need all government departments and entities to discuss these issues,” Notywala says.

What all of this means for data capturer Mcyiwazo is that for the foreseeable future, she will continue to do her frightening 15-minute walk in the dark to the bus stop.