Zambia’s proud democratic tradition is hanging by a thread. Since coming to power in 2015, President Edgar Lungu has pursued the “holy trinity” of authoritarian leaders. First he intimidated opposition parties and neutered civil society groups, muting criticism of his political and economic failings. Next he used his influence over the Constitutional Court to push through a controversial third term in office. Finally, Lungu is plotting to amend the Constitution to remove the remaining constraints on his power.

If nothing is done to block the Constitutional Amendment Bill, one of the countries that looked set to gain the most from the reintroduction of multiparty politics in the early 1990s will no longer be a democracy in any meaningful sense. Instead, Zambia will move further along the pathway that leads to a disguised authoritarianism in which elections are stage-managed to confer unearned legitimacy on what is a repressive and unpopular regime.

It has been a tough few years for Zambian democracy. The controversy about the presidential elections of 2016 has never been resolved. The subsequent refusal of opposition leader Hakainde Hichilema to recognise Lungu as the country’s legitimate president led to a sustained political impasse during which the government had him imprisoned on trumped up treason charges.

Although he was subsequently released, the situation facing civil society groups and government critics has become increasingly difficult. The Law Association of Zambia has been threatened with deregistration, church leaders have been detained by the police for having the temerity to discuss the budget, and the state broadcaster continues to pump out pro-Lungu propaganda.

Against this background, the constitutional changes being considered may not be the final nail in the coffin of Zambian democracy, but they would make it extremely difficult to hold Lungu and his Patriotic Front (PF) government to account. According to Sishuwa Sishuwa, a respected commentator on Zambian politics, “the Bill is the grave digger of Zambia’s democracy and the country’s worst constitutional amendment since the achievement of independence in 1964. It is primarily designed to consolidate the PF’s stay in power and make it effectively impossible to remove President Edgar Lungu from office.”

In addition to undermining key democratic principles, the Bill would reverse some of the positive developments that have taken place over the past 28 years. It is clear that these changes are intended to make it easier for the Patriotic Front to retain control of the political agenda — and to guarantee victory in general elections scheduled for 2021. 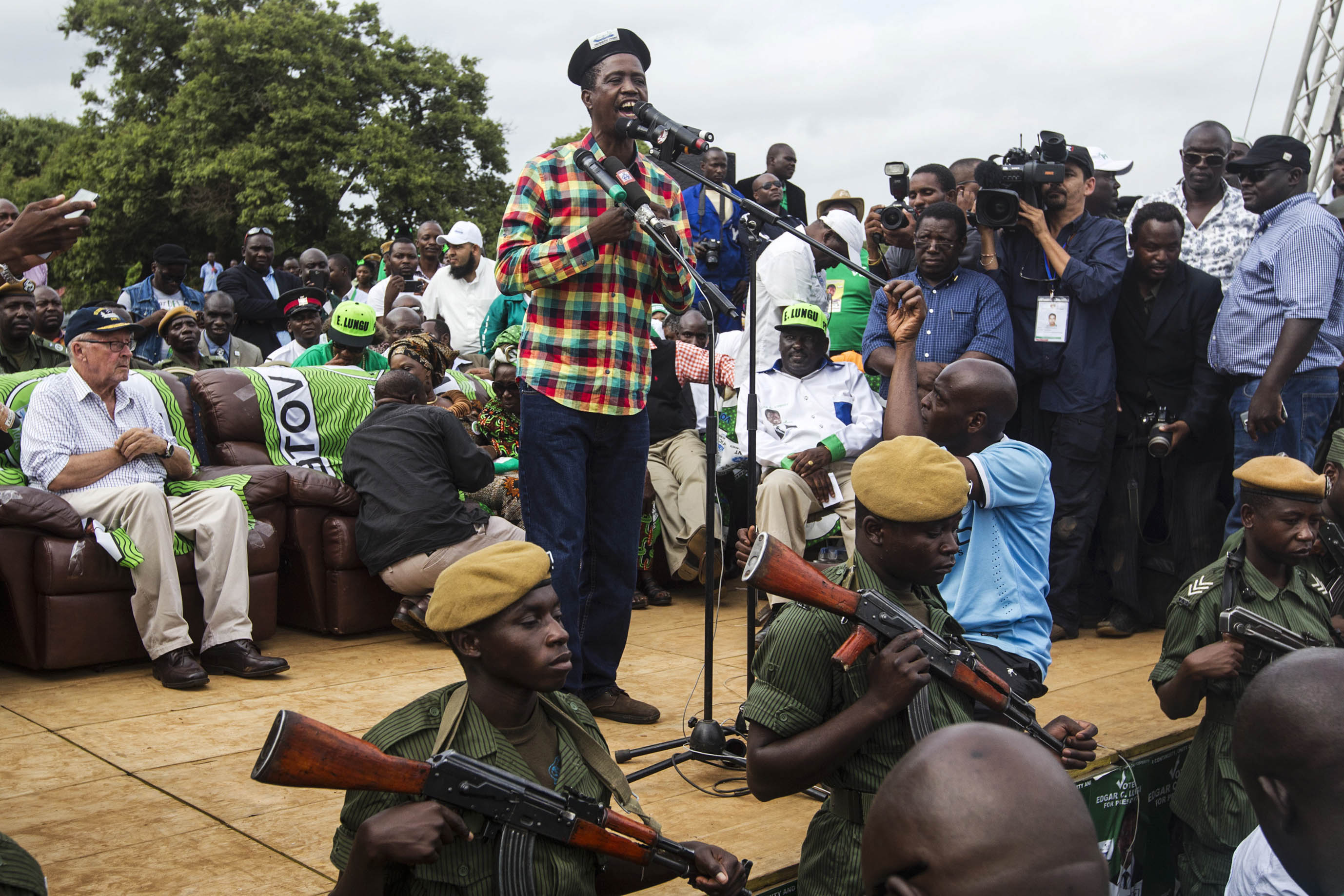 Victory: The Patriotic Front’s candidate, Edgar Lungu, won the 2015 presidential election by a narrow margin of about 27 000 votes (1.6%). (Rogan Ward/Reuters)

As Sishuwa notes, behind the proposed changes is a desire to “create a one-party state in all but name by undermining the institutions that offer the long-term hope for democratic consolidation such as elections, the Constitution, the National Assembly and the judiciary”.

There are three particularly problematic clauses that threaten the future of Zambian democracy.

Perhaps most worryingly, the Bill would remove constitutional provisions on the number of judges that can be appointed to the Supreme Court and Constitutional Court, transferring the power to decide this to Parliament. Because the president is usually able to use a variety of legitimate and illegitimate strategies to ensure that Parliament supports his wishes, this effectively enables him to appoint as many additional judges as he needs to ensure that the courts rule in his favour. The Bill would also make it much easier for the president to dismiss judges by relaxing the procedure for their removal from office.

As a result, a number of international bodies, including the International Bar Association’s Human Rights Institute and the Commonwealth Lawyers Association, have warned that the Bill would undermine the independence and impartiality of the judiciary.

A second amendment features a similar change where the number of MPs is concerned, effectively removing constitutional limits and giving Parliament the power to decide its own size. Critics suggest that this provision has been designed to enable the government to gerrymander the outcome of the 2021 elections by creating more seats in its heartlands, warping the country’s electoral map.

A third retrograde step is the return of deputy ministers, previously axed because successive governments had manipulated the system to strengthen their hold on power. By appointing an unnecessarily high number of deputy ministers, the ruling party can include a large proportion of Parliament in the Cabinet. In this way, the government can expand its patronage networks and increase the number of legislators bound by “collective responsibility”, undermining legislative scrutiny.

Taken together, these changes would not just tilt the political playing field in the government’s favour, they would effectively empower the Patriotic Front to change the rules of the game at will.

The battle to come

Lungu is smart enough to know that implementing these constitutional amendments by force would look bad domestically and internationally. His regime’s reputation has already been tarnished by corruption scandals and the country’s poor economic performance. Lungu has therefore followed the example of other clever autocrats by trying to legitimise his power grab.

He has tried to do this by presenting it as the organic outcome of a consensual and inclusive reform agenda. Earlier this year, the government established a national dialogue forum, which agreed on a number of resolutions that in turn laid the foundations for the Bill.

But the forum was neither fully inclusive nor representative. It was criticised by opposition MP Harry Kamboni as “a Patriotic Front-driven programme to consolidate their stay in office using the back door”. Hichilema has denounced the Bill and instructed his United Party for National Development (UPND) MPs to vote against it in Parliament.

This presents the Patriotic Front government with a significant challenge, because there is a genuine possibility that the Bill could be defeated.

The Patriotic Front holds 57% of the seats, which is enough to ensure that the government gets its way on most issues, but not when it comes to constitutional changes that require a two-thirds majority.

Such is the vulnerability of the Patriotic Front to defeat in Parliament that if all 56 UPND MPs veto the Bill when it is presented for a second reading, it would collapse. As a result, the Patriotic Front has set about both trying to intimidate and bribe opposition MPs, including an offer to pay all allowances and gratuities now rather than at the end of their term in 2021.

The attack on democracy in Zambia has often been overlooked outside of the country, in part because media attention has tended to focus on the more high profile political crisis happening further south. Although Zimbabwe has seen more explicit violence, what is happening in Zambia is no less important, and the implications for Zambian democracy are no less profound. 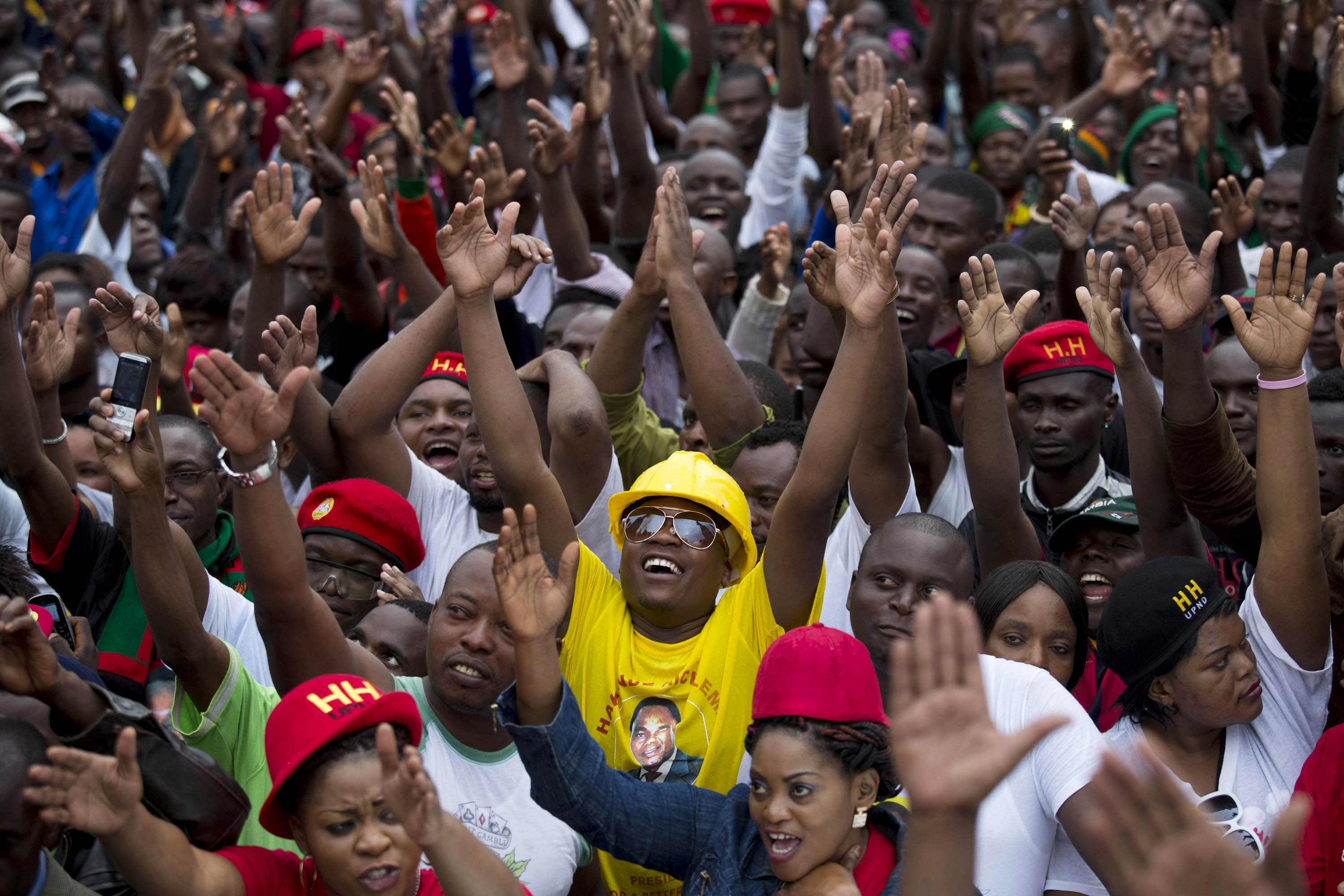 Fettered: United Party for National Development supporters welcome their presidential candidate, Hakainde Hichilema (not pictured), as he arrives at a rally in 2015. (Rogan Ward/Reuters)

Civil society and the judiciary have already been weakened to the extent that they are unlikely to be able to protect the Constitution. The fate of Zambia’s democracy now depends on the unity and resilience of the opposition MPs and the few institutions that are not under the president’s control. But these efforts are unlikely to be successful unless the international community stands up to Lungu.