Speaker of Parliament Thandi Modise has entered the fray in the court battle between President Cyril Ramaphosa and the public protector, saying she wants to join the case to challenge the protector’s Bosasa report in her own right.

The court case over Busisiwe Mkhwebane’s Bosasa report is set to be one of the most significant legal and political battles of the president’s first years in office, and has pulled in some key state institutions — the Speaker, the Financial Intelligence Centre (FIC), the Information Regulator — and an opposition party, the Economic Freedom Fighters.

The investigation at the centre of the case was the result of a complaint by Democratic Alliance leader Mmusi Maimane that Ramaphosa had misled Parliament when he answered a parliamentary question about a R500 000 donation from Bosasa’s Gavin Watson to his CR17 campaign.

She also directed the NPA to “take note” of her report and “conduct further investigation into the prima facie evidence of money laundering as uncovered during my investigation”.

In her report, Mkhwebane found Ramaphosa had deliberately misled Parliament and went even further, detailing transfers of millions of rands between the CR17 campaign’s various bank accounts.

Mkhwebane said there was “merit” in a suspicion of money laundering and that “such a scenario, when looked at carefully, creates a situation of the risk of some sort of state capture by those donating these moneys to the campaign”.

However, she stopped short of making a finding in that regard, instead directing the speaker to demand that Ramaphosa disclose the details of donations to the CR17 campaign.

Ramaphosa has challenged the whole of her report, saying it is irrational, that her investigation was procedurally flawed and that she had an ulterior purpose.

What’s in the balance?

Much is at stake in the case for both the president and Mkhwebane. The public protector is already limping after the bloody nose she got from the Constitutional Court, which found that she was dishonest and lacked integrity — leading Parliament to make rules for an impeachment investigation. She has also had a string of losses in court, particularly in the highly politicised cases involving Public Enterprises Minister Pravin Gordhan.

If the court agrees, as Ramaphosa now claims, that the complaints against him were used by her as a “useful cover for what was her real investigation”, this would most likely put an end to her tenure.

But the president has also been bruised by the battle. In an economic climate in which the vast majority of South Africans are battling financially, the startling revelations of just how much money it took for him to win the ANC’s epic presidential battle at Nasrec took the shine off Ramaphoria somewhat. Bank statements and emails leaked to the media also cast doubt on his assertion that he knew little of the fundraising and identities of the donors — and, therefore, his reputation as “Mr Clean”.

The leaks also touched on one of Ramaphosa’s political vulnerabilities: that — in a society where some people can afford to simply donate a few million rand while others cannot feed their families — he is in with the millionaires. As the court case has progressed, Ramaphosa has also sometimes been in an invidious position of having to decide whether to adopt strategies that are good in law but may not be good politically.

Gloves off: President Cyril Ramaphosa’s reputation as ‘Mr Clean’ is under fire as questions about donations to his CR17 campaign are raised in court. (Paul Botes/M&G)

One of these was his application to keep confidential the financial documents related to the donations. It may have been a sound legal decision since he had given confidentiality undertakings to his donors, but it made him look like he has something to hide.

Now other state institutions are piling in. In a letter on behalf of the speaker, the state attorney said that, in the ordinary course of events, Modise would have brought her own challenge to the report. But, given Ramaphosa’s challenge, it would be appropriate for her to join the case — but as applicant instead of respondent.

Information regulator Pansy Tlakula has also written to the parties asking to join as a friend of the court, saying Ramaphosa had raised concerns about how Mkhwebane had obtained the CR17’s financial information and that it may have been in breach of the Protection of Personal Information Act (Popia). This Act is fairly new legislation, said Tlakula, and “the regulator is of the view that it can assist the court”.

Mkhwebane refused to consent to Tlakula joining as a friend of the court, saying in a letter on September 12 that Ramaphosa’s concerns were “now academic” as the FIC had since confirmed that the bank statements were lawfully received by the public protector.

But if the issue was academic on September 12, it is not any more. In his supplementary affidavit, Ramaphosa reiterates his concern about the financial information and squarely raises a further possible breach of Popia — referring to private emails between members of the CR17 team. The emails are contained in the rule 53 record — a record of the documents relied on by the public protector in making her decision and submitted to the court. 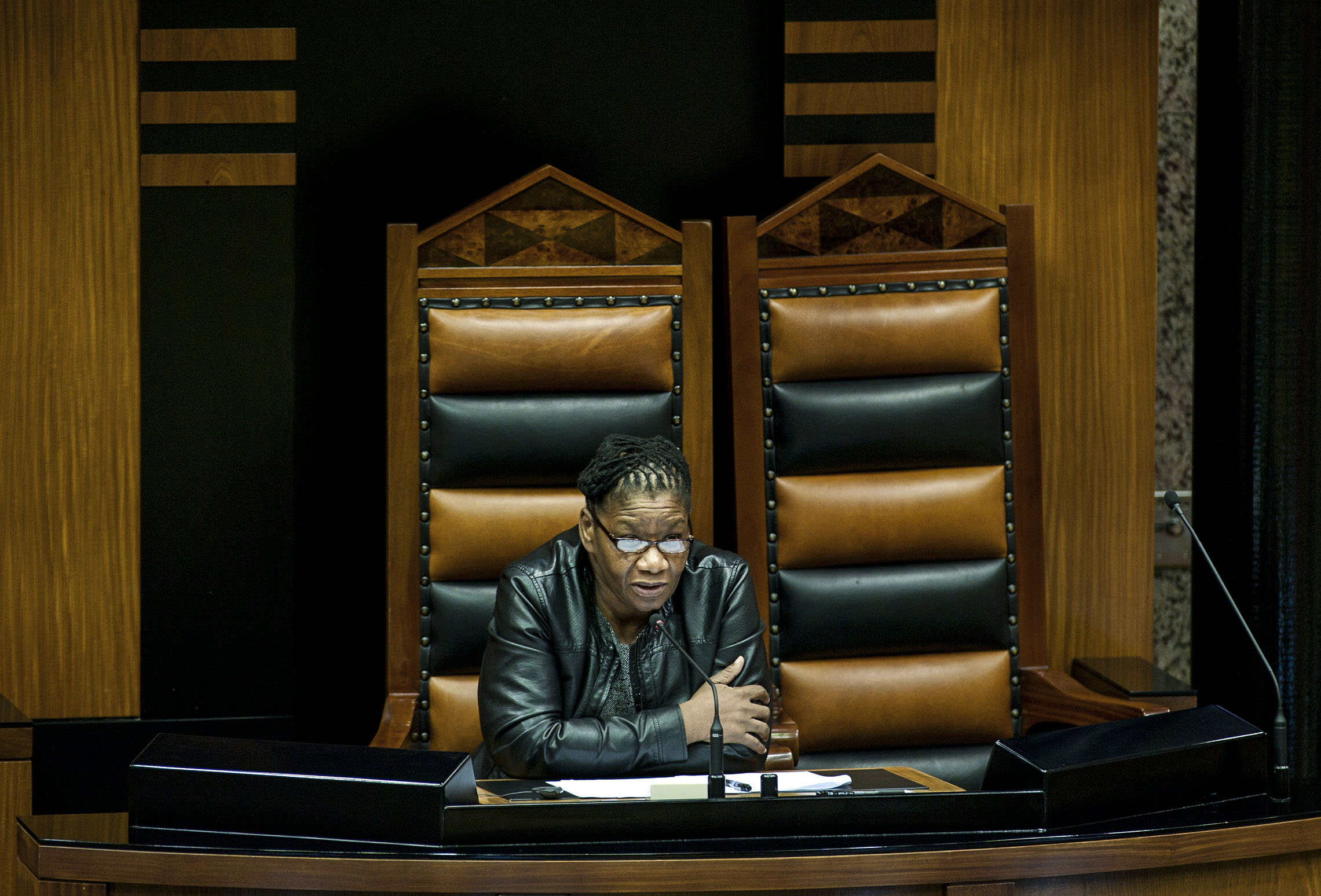 Entering the fray: Speaker of Parliament Thandi Modise says she would like to join the case between the president and the public protector as an applicant (David Harrison/M&G)

The emails were relied on by Mkhwebane to find that Ramaphosa knew more than he claimed about who his donors were. Ramaphosa said Mkhwebane did not receive the emails from him or from the FIC. “In the circumstances, these emails could only have been obtained unlawfully,” he said.

The EFF has also sought to intervene in the case. A preliminary hearing to help the court decide who to allow in has been scheduled for October 3.

The gloves have come off now that Ramaphosa has seen the rule 53 record. In his supplementary affidavit, filed this week, Ramaphosa accuses the public protector of using the complaints against him by Maimane (and another later by the EFF’s Floyd Shivambu) to go on a “fishing expedition” and as a cover to investigate the CR17 campaign.

The public protector is yet to respond to Ramaphosa’s claims. Her answering affidavit, which is keenly anticipated, will enable a better assessment of the strength of their respective cases.

The president has also accused the FIC of unlawful conduct — prompting the body, which normally operates in closely guarded secrecy — to enter the court proceedings.

The FIC controversy adds another grave dimension to this court case. If the court proceedings reveal that the FIC — which has access to people’s most private information — acted unlawfully and to further a partisan agenda, it will undermine the credibility of a crucial institution in the fight against economic crime.

Ramaphosa took issue with the FIC because, when Mkhwebane sought information from the centre, what she had asked for was “very specific” and limited to the R500 000 Watson donation. The FIC provided her with much more: information related to CR17’s other bank accounts and detailing transactions for more than a year before the donation in some cases.

In a letter to the FIC, Ramaphosa’s lawyers said that by obtaining the additional information from the relevant banks and by giving it to the public protector, the FIC acted unlawfully.

The FIC disagreed. It said the centre was “not a mere information processing mechanism”. Its job — “in a spirit of strict neutrality” — was to collect and analyse financial information to support law enforcement agencies and part of its job was to work with and assist the public protector.

The FIC said it received “suspicious or unusual activity” reports and “cash threshold” reports about “the accounts that the centre considered in attending to the public protector’s request”. The FIC Act requires that anyone managing or employed by “a business” who suspects transactions may be used for money laundering to report it to the FIC. Banks must also report to the FIC if more than a certain amount of cash is transferred.

When Ramaphosa’s lawyers asked to see the suspicious activity reports, the FIC responded that it would rather seek to enter the court case.

“Our instructions are that it is not desirable, given the public interest in this matter and our client’s stance of neutrality, for our client to continue to address your client’s issues in a piecemeal basis by way of correspondence with one side only.”

In his supplementary affidavit, Ramaphosa sticks to his view that the FIC acted unlawfully: “It is clear … that the FIC sent the public protector more information than she had asked for. This conduct may have been innocuous, but it was unlawful,” he said.