Billions spent, and a boy has died, but Giyani’s taps are still dry

It has been five years since a bulk water supply project was started in the Limpopo Bushveld but people living in more than 50 villages still don’t have water. Even the drowning of a six-year-old boy has not galvanised government and its implementing agents to complete the initiative

July Sayini Mhlongo says it is important that he speaks about how his six-year-old son Nsuku died, but he struggles to get the words out.

In January, the boy was playing with other children and drowned in a trench dug by Khato Civils. The construction company was contracted four years ago to provide the infrastructure for water to more than 50 villages in Giyani, Limpopo.

A drought in late 2000 exposed the faulty water infrastructure. Billions of rand have been spent since then and both the current and former presidents made it a priority in their State of the Nation addresses. But there is still no water in the villages, including Homu. Instead, families have to pay for water, walk for three hours to collect it or make illegal connections on the main pipeline 30 minutes from the village.

Allegations of corruption have been levelled at the department of water and sanitation and its implementing agent, Lepelle Northern Water board.Neither commented in this article, despite having weeks to do so.

Mhlongo wrings his hands and says: “By the time we arrived at the site where he drowned there were many people there, just watching my son floating in the brown water.”

He stops talking and wipes his face. The brown couch he’s sitting on seems terribly uncomfortable.

His eldest daughter, Patience Mhlongo, takes over the narration, as she stares down fondly at her baby nursing at her breast.

She was not at home when her little brother went missing on that Friday afternoon. She got a phone call and rushed back to help look for him. By the time she arrived Homu residents had found the boy’s body in a hole filled with brown water.

“There was a crowd watching him floating there. My father had to jump into the water and carry my brother’s lifeless body out of the pit. He will never forget that. After that, he could not attend to anything. My uncle took care of all the arrangements. Even now, he deals with the investigation [into Nsuku’s death].” 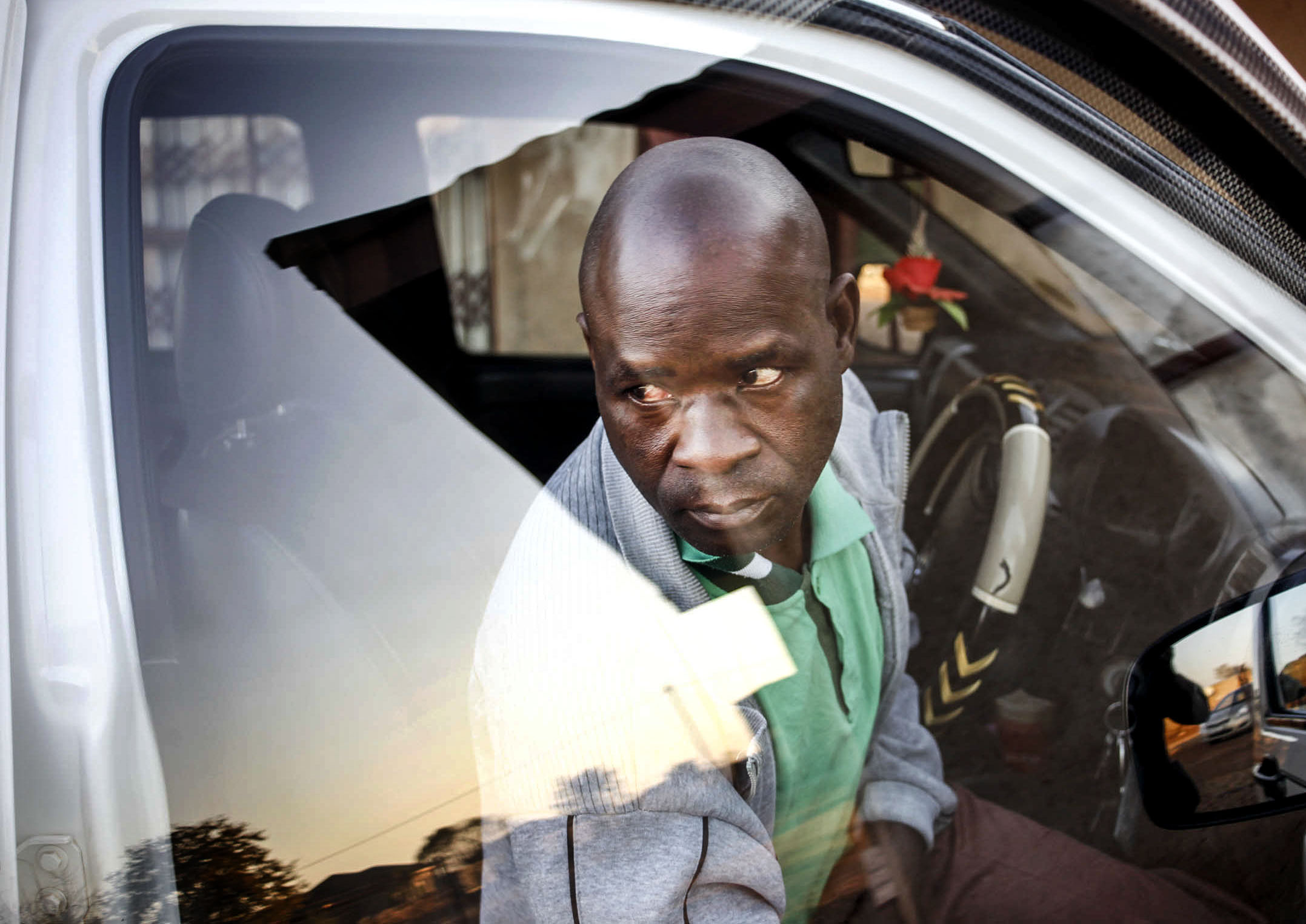 July Sayini Mhlongo had to lift the body of his son Nsuku from the trench. (Oupa Nkosi/M&G)

With water still not flowing from taps, she says: “We’ve never had water, so you would think we are used to it. But knowing that money was set aside for it and we should have water by now is where it’s hard.

She adds: “My brother is dead. My father and mother are hurting and [there is still] nothing from the government.”

Less than 5km from the Mhlongo home, a young man pushes a rickety wheelbarrow loaded with three 25-litre drums of water along a gravel road that has been under construction for years — so long that people can’t pin down a date. His hands are calloused and carry the scars of burst blisters. They look like the hands of a much older person who has done hard labour every day.

He won’t give his name, but says: “It is hard; I have to do this daily after school and I am tired. There is nothing else we can do because we need the water.”

A bit further down the road, another Homu resident, Themba “Rasthemba” Maringa, fumes at what he says is a lack of respect by the government. “People have to travel four or five kilometres to get water, carrying two or three drums every day. What life is that? Schoolchildren can’t even perform well at school because they are constantly tired.” 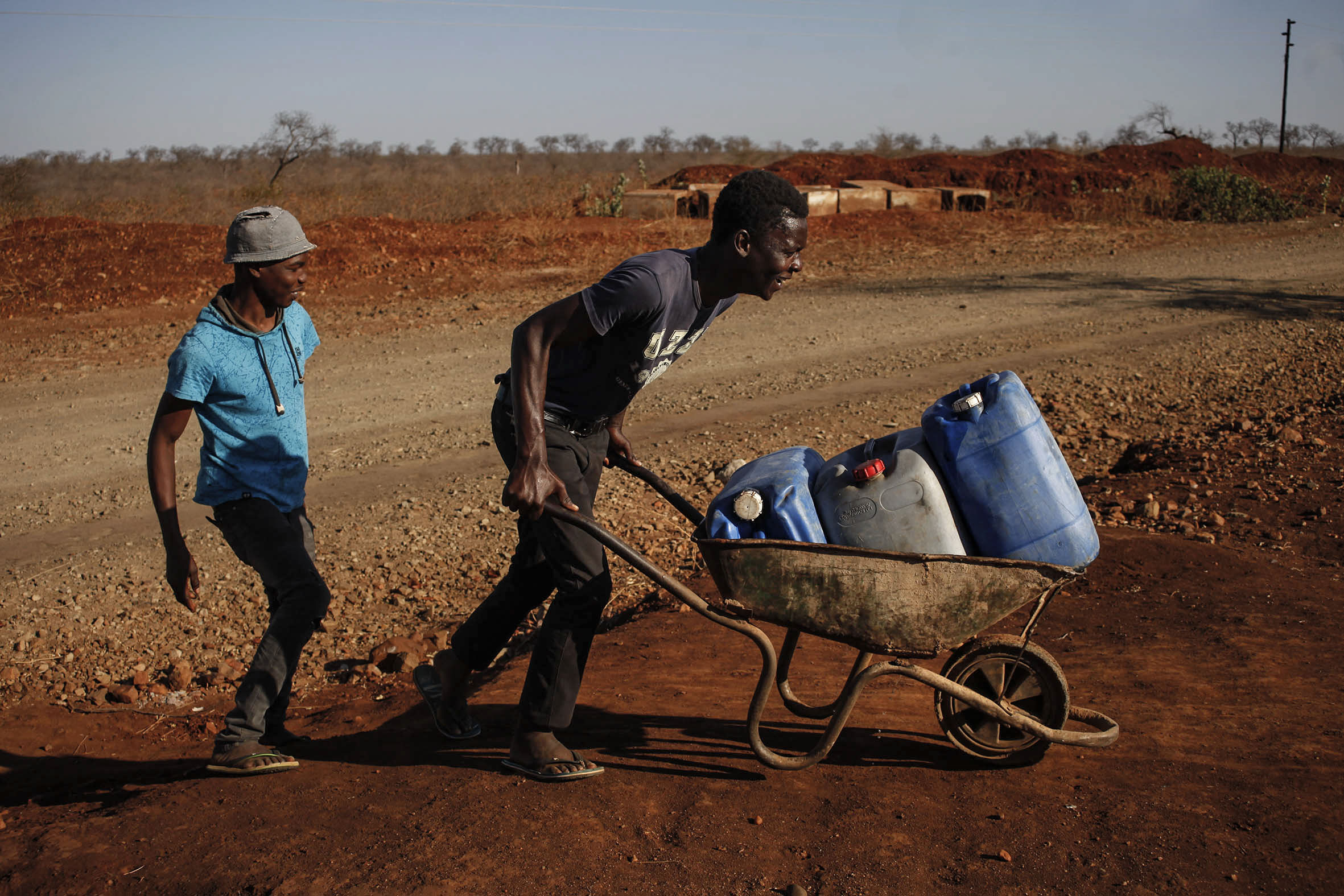 When Khato Civils came in, he says they arrived “with the promise of running water in five years”, but now the company has gone away — and the water department has come close to insolvency because of the huge debt left from the tenure of former minister Nomvula Mokonyane.

Maringa is also pushing a wheelbarrow. It’s loaded with ripe red tomatoes. The soil under his feet — also red, but dry and caked — cracks under the pressure of his boots.

Maringa earns some income from growing and selling tomatoes. He believes the water shortage is preventing other residents from planting and selling vegetables to make a living.

He says: “Government is saying nothing since Khato left. We are years down the line and there is not a single drop of water for us.

“Lepelle [Northern Water] is not concerned about us. Earlier this year, Lepelle brought a small, incapable company that only came to the village to fool us, saying that they want to employ the locals. Then they disappeared. There has been no activity since. The only activity you will see is our people pushing wheelbarrows up and down.”

Khato Civils chief executive Mongezi Mnyani says the company has completed 95% of the work it was brought in to do. The bulk of this was to bring water from Nsami Dam and get it to various reservoirs around Giyani.

The part of getting water from those reservoirs to households was not part of the contract, he says.

“The narrative created — that Khato Civils has been paid over R3-billion — is incorrect. So far we have spent a budget of R2.2-billion.” The figure of R3-billion was used by media in previous investigations of spending in Giyani. Mnyani says: “We worked in Giyani for a period of four years. We are no longer working on this project and we don’t know where the [talk of the] R3-billion payment is coming from.”

He says Khato received only a portion of the R2.2-billion, and that the rest was divided between Lepelle Northern Water, LTE Consulting and the South African Revenue Services for value-added tax.

“The contract for this work was never between Khato Civils and Lepelle Northern Water but with LTE Consulting [and Lepelle], and we were subcontracted [by LTE].

“What was paid to Khato Civils — it’s for the work done, and was certified by the professional engineers before any payment was received. As far as we are concerned we did the work diligently and according to the specifications.”

So who is responsible?

Allegations surrounding the Giyani contract have been investigated by the Special Investigating Unit, which is now trying to recoup the billions from the various companies involved in the Giyana Bulk Water Project, and the public protector.

The allegations include that the contract to build the infrastructure was invalid, that there was a misappropriation of funds and that Khato Civils had not done the work it was paid for.

Khato says it is still owed R45-million for work it had done.

Mnyani says: “Please note that the matter is now in court and our lawyers are handling the matter on our behalf, and we will oppose any sinister move to discredit our name and reputation.”

When Lepelle was contacted two weeks ago about when water would be available in Homu and the other villages, spokesperson

Simon Mpamonyane did not respond to detailed questions relating to the money budgeted for this project and the fruitless expenditure incurred.

With seemingly no money left for the project — and the national water department struggling to stay afloat — Sibongile Baloyi, a mother of two in Homu, has to spend much of her salary on buying water.

“The water costs us R3 per 25-litre and we use three of those on households things every day. I have to budget about R300 every month.”

She points towards the distance, to a place the eye can’t see, and says: “When I don’t work and don’t have money I have to get water from the township. It’s really far; it’s not an easy life here.”

Nobody is willing to accept responsibility for the ongoing impasse, which means the people living the villages around Giyani still don’t have water.

What’s a boy’s life worth?

The drowning of six-year-old Nsuku Mhlongo in a trench dug for the Giyani Bulk Water Project is one of a number of recent deaths in which the state and others have been implicated. These deaths also raise the question of how much a life is worth.

Khato Civils dug the hole in which Nsuku drowned. The company’s executive officer, Mongezi Mnyani, says the construction company donated R50 000 to the Mhlongo family and assisted with the funeral arrangements.

But no one has taken responsibility for Nsuku’s death.

Mnyani said Khato Civils had not been paid, so in September last year the company left the site.

“When we left the site we had complied with all health and safety requirements. The site was therefore the responsibility of Lepelle Northern Water.”

Lepelle is a state-owned water board and is one of nine that fall under the department of water and sanitation. In January, its spokesperson, Simon Mpamonyane, said the responsibility to close the holes fell on the contractor who dug them — paid or not.

There has been no response to the Mail & Guardian’s questions regarding the role of the water board in Nsuku’s death.

Another case where the state has been partly negligent is the 2012 Marikana massacre. The families of the deceased miners were offered more than R100-million to share between 320 claimants.

In the Life Esidimeni case, it was ruled that the families should be paid about R1.2-million each.

In the Michael Komape case, the state is still contending that the family of the six-year-old boy, who drowned in human faeces at school because the state failed to provide adequate toilets, should not be compensated for emotional shock and damages for grief.

The M&G reported in early September that the Supreme Court of Appeal found that nobody had accepted responsibility for his death, and no one had apologised for their role in it.