Karim* stands outside what used to be his front door. Now it is bricked up and someone has drawn a menacing black padlock, taller than a man, on the grey breezeblocks.

“It was really nice in there,” he says wistfully. “There was food, there was a roof, there were no problems.”

The building in question is the three-storey main block of an abandoned school, on a steep road in the central Athens neighbourhood of Exarchia. The former high school was abandoned about four years ago. Not long afterwards, the building and grounds were taken over by families of refugees and asylum seekers, who ran it as a self-governing common space. Everyone was expected to contribute whatever skills they had: teachers offered language classes, former hotel managers worked in the kitchen, IT experts kept the wi-fi going.

When Karim arrived from Iraq less than a year ago, he was welcomed into the building, which gave him shelter and respite from what is sometimes a dangerous city for foreigners.

Karim has no family in Athens. He’s 19 and speaks only Arabic. He remembers the day in late September that the police cleared out the building. They stormed in with their batons and riot gear, forcing everyone into trucks waiting outside. Everyone scrambled to grab their belongings, although Karim did not have much to take. They were taken to migrant camps on the outskirts of Athens, where conditions are squalid and employment opportunities nearly non-existent. 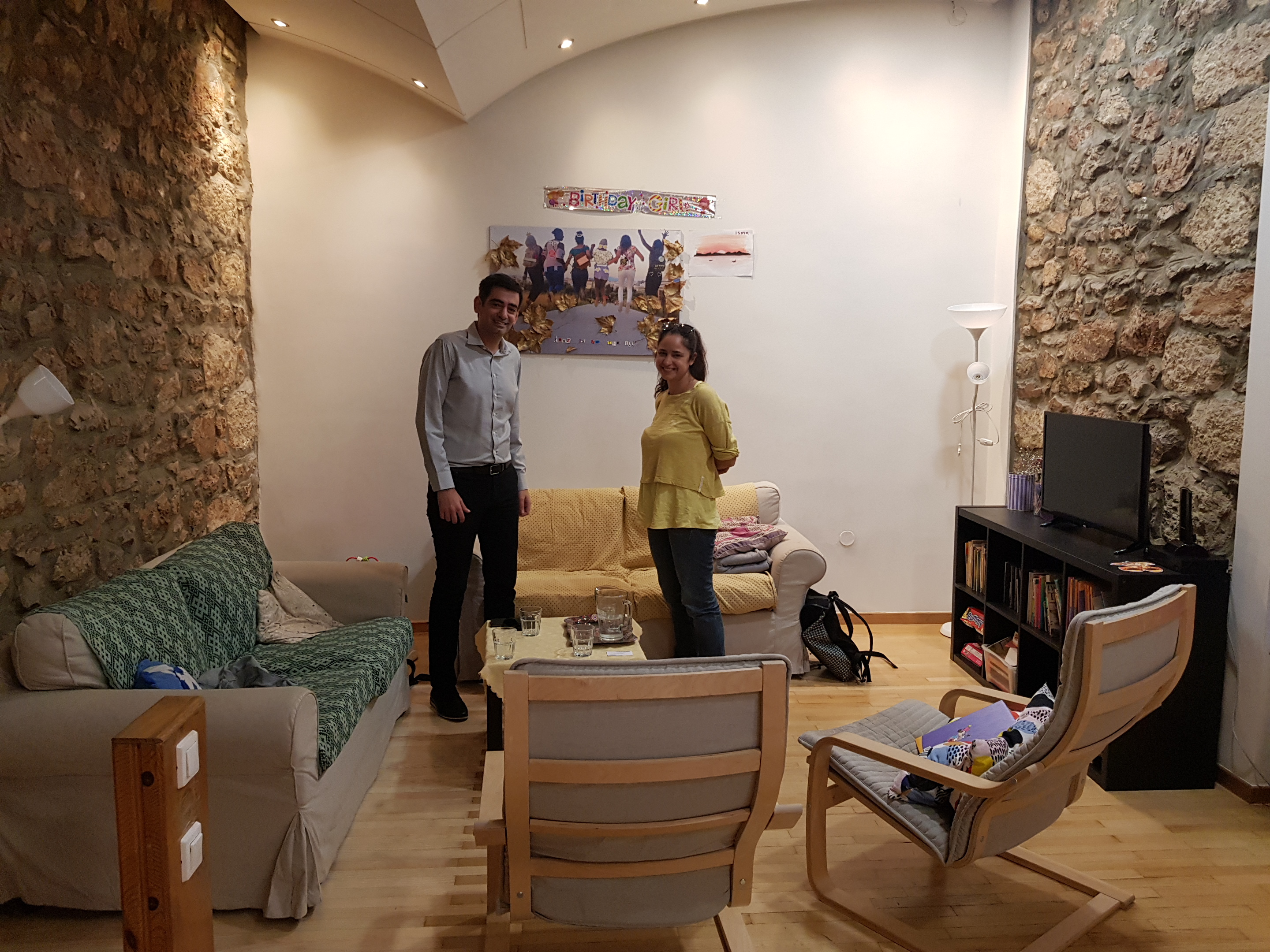 Vassilis Michailidis and Maria Kaldani, with the Home Project, pictured in the living room of a shelter for unaccompanied migrants.

“The camps are okay,” says Karim, with the cheerful resilience of a teenager, but he does not intend to stick around there for long. His dream is to go to Germany, where he believes he will be welcomed.

As we speak, a Greek woman comes marching up the hill. She passes us, turns and shouts in English: “We don’t want them here.” And then, loudly and slowly, said to Karim: “We. Don’t. Want. You. Here.” She marches on.

“What did she say?” asks Karim. I did not have the heart to translate.

Thou shall not pass

For decades, Exarchia has been the centre of the Greek anarchist movement and radical left, and is regularly the site of violent clashes between residents and police. Like much of central Athens, its walls are covered in a second skin of jagged graffiti, but here the art is unequivocally political and sits alongside posters for anti­government demonstrations and concerts by the likes of Grup Yorum, the dissident folk rockers from Turkey.

Although its independent bookshops and trendy restaurants are a draw for tourists, politics is never far from the surface. In 2015, youths threw glass bottles at then-finance minister Yannis Varoufakis, a famously progressive figure, who was having a meal with his wife in the neighbourhood, because he was not left enough.

Because of its reputation, and the key role played by activists in ousting the dictatorship in 1974, Exarchia enjoys a special status in the state: in general, the government adopts a laissez-faire approach to whatever goes on inside its boundaries but maintains a ring of armed riot police around its perimeter at all times.

This reputation has made it a natural home for activists, drug dealers and, increasingly, refugees. Several abandoned buildings in Exarchia have been turned into homes for refugees, which were tolerated by the previous government. But Greece’s new government, led by the New Democracy Party, is not so tolerant. Party leaders campaigned on an explicitly anti-immigration platform and have made it their mission to clean up the suburb. The raid on the abandoned school was one example of the new approach. Several other buildings have been cleared of refugees.

The ones that remain are on guard and understandably wary of outsiders. Down one side street, a four-storey office block is now home to more than 130 people. Just a couple of months ago, this building was petrol-bombed, and residents quelled the fires with extinguishers.

Yves*, from the Democratic Republic of Congo, sits in a plastic chair outside, acting as an informal watchman. He is happy to talk about Congolese politics but won’t talk about the building or its inhabitants. He warns me not to take photographs of the building itself. Strung across the street is a banner that reads “No Pasarans”. The same message is daubed on walls and printed on posters all over the suburb.

Yves explains: “It means, in Greek, no passage. It’s a message for the police.”

Greece has been on the frontlines of Europe’s so-called migration crisis since it began in earnest in 2015. According to the country’s civil protection minister, Michalis Chrysochoidis, Greece is hosting an estimated 80 000 asylum seekers and refugees, with more arriving every day. Many are housed in camps stretched well beyond their intended capacity, such as Moria camp on the island of Lesbos, where more than 11 000 people are crammed into facilities designed for just 3 000 — and that number grows every day.

Many are suffering from severe psychological trauma. “People are suffering a lot. Most people experience traumatic symptoms once they arrive. They arrive, they expect to find a safe haven and then realise that it’s just a continuing horrifying experience,” says Melanie Vassilopoulou, a psychologist with Doctors Without Borders, which runs a clinic for refugees on the boundary of Exarchia. The clinic specialises in sexual and reproductive healthcare and provides therapy and counselling. 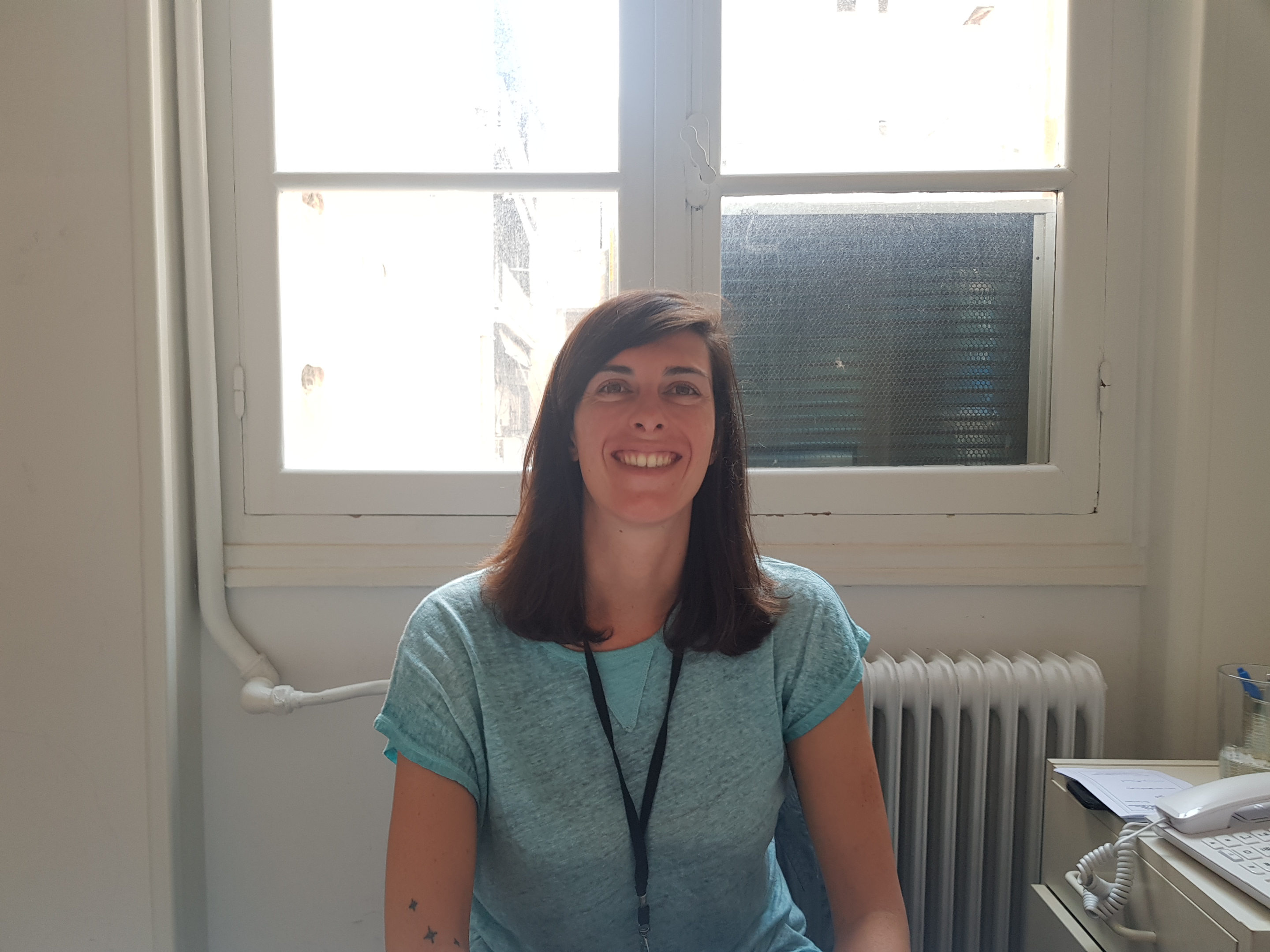 Melanie Vassilopoulou is a psychologist with Doctors Without Borders.

The trauma experienced by refugees and asylum seekers is multifaceted. “Most people have fled violence or experienced it. Plus the difficulty in their present living conditions and future uncertainty,” says Vassilopoulou, who has been working at the clinic since 2016. With Greece still struggling to recover from a devastating economic crisis, the job is a godsend. She sees five patients a day, for sessions of 45 to 50 minutes. Most suffer from anxiety and depression; those with severe mental health issues are referred to an on-site psychologist.

“To be a refugee is a chronic condition,” says Vassilopoulou, although she adds that the experience is not always negative. “There is a loss through trauma, but also a gain … we use a technique that is focusing on people’s resilience. We hear their difficult stories but we don’t stay there. Instead, we focus on the fact they have survived so much.”

Teenagers will be teenagers

Francis* is four years old, and he is very excited — tomorrow is his first day of preprimary school. He arrived in Greece with his mother, a teenager from the Democratic Republic of Congo, and they are among the estimated 4 400 unaccompanied minors who have followed the refugee trails and found themselves in Greece. Of these, just 1 100 have been referred to a shelter; the rest live outside any system of child protection, in camps or with compatriots.

Francis and his mother stay in a grand old house in a central Athens district that neighbours Exarchia. The building was abandoned and derelict, until it was taken over by the Home Project, a nongovernmental organisation that establishes shelters for unaccompanied minors. There are 11 shelters, which look after 220 children. This one has capacity for 15 girls, including two mothers and two small children, and has been renovated to look and feel like a home, complete with Ikea furniture and a cozy lounge.

The Home Project is not always welcomed when it opens a new shelter. Neighbours are sceptical. “There is rising xenophobia and especially Islamophobia,” says Maria Kaldani, the organisation’s head of human development. To combat this, the organisation tries to integrate as much as possible into the local economy: they shop at local markets, and hire local plumbers and electricians. The strategy is only partially successful. “At the end of the day they say: ‘Your children are good, the others are not’,” says Kaldani.

Children adapt much faster than adults — and the younger they are, the quicker the integration happens. Francis, for example, already speaks Greek along with his native Lingala. For older teenagers, it can be more difficult, especially when they are thrust into a school where they are unfamiliar with the language and the curriculum. But the Home Project facilitates language classes and tutors to help them cope, and teenagers are remarkably resilient. “Yes, they are vulnerable and traumatised, but they are also teenagers. Part of our job is to find ways to let them be teenagers,” says Kaldani.

Kaldani’s colleague, Vassilis Michailidis, is proud of what the Home Project has achieved. But he is aware that it is not nearly enough. “We cannot enjoy our achievement, because it is constantly in our minds that there are 3 000 more unaccompanied minors,” he says.

That number is likely to increase dramatically: the new conflict in Syria and Turkey’s changing refugee policy means there has been a spike of new arrivals in Greece, many of whom are unaccompanied minors.

“The European Union needs to realise that these people will keep coming,” says Kaldani. “We need to find a way to deal with them.”

*Names have been changed