“In the wake, the past that is not past reappears, always to rupture the present.” — Christina Sharpe

The Goodman Gallery in Johannesburg is currently presenting Joburg Selected, a solo show by veteran artist Sam Nhlengethwa. He is known for his collages, prints and mixed media works on canvas that often create a beautiful conversation between the visual and the sonic through his love of jazz. With Joburg Selected, Nhlengethwa calls on us to consider the city through its buildings and structures. Every line imprinted on the metal plate and every image assembled on the canvas sharpens the contours of the city. 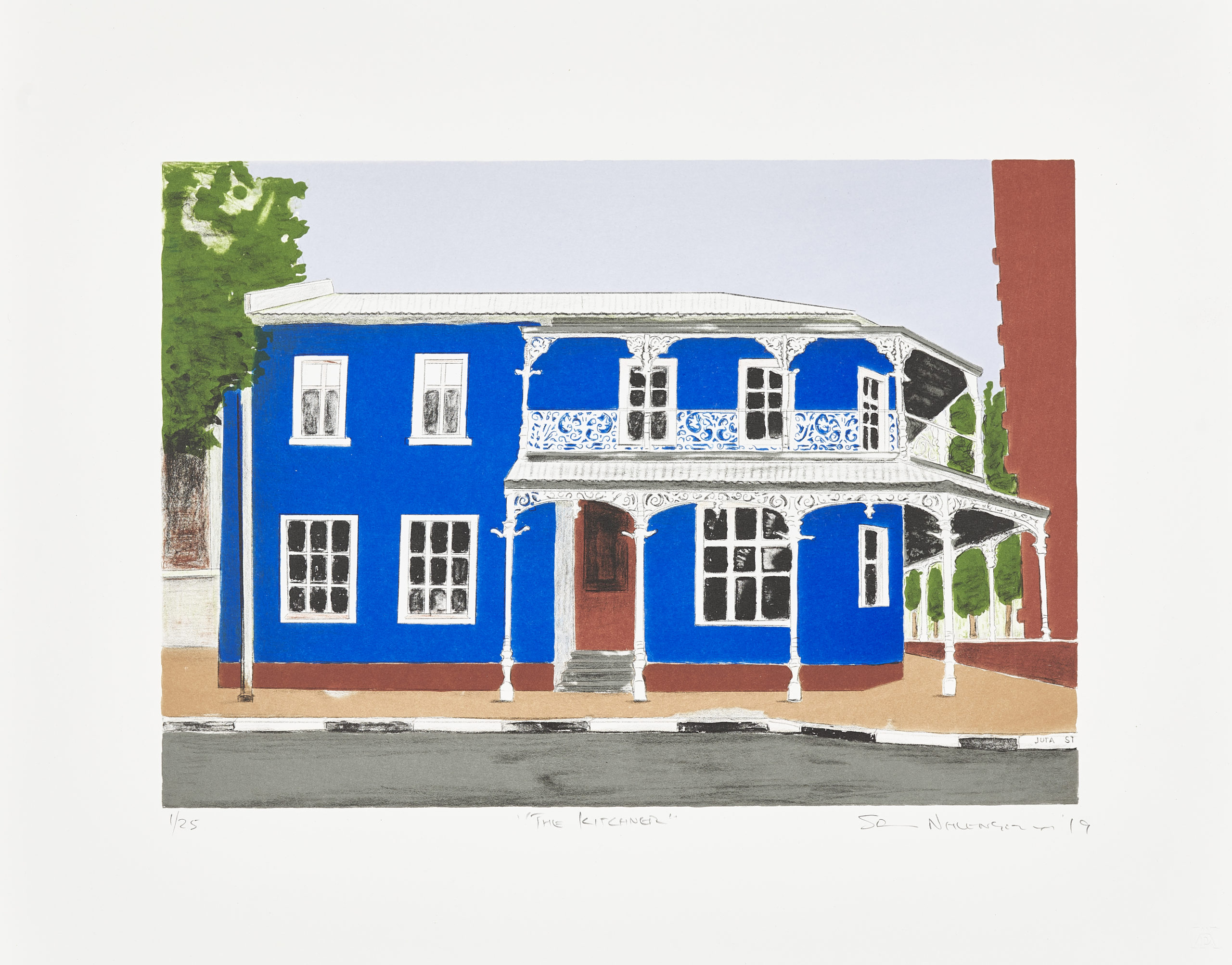 Perhaps the starting point for reflecting on the images assembled in Joburg Selected is the way in which sites and scenes in the city speak to its stuckness — or unstuckness. Often, when we think about being stuck we think about the absence of movement or motion, but it is also possible to be stuck in a loop — endlessly rotating around an axis until we’re back to the point where we began. Nhlengethwa’s images are a gateway to ruminating on that loop. In thinking thoroughly and deeply about it we are confronted with questions of how (and where to) the city is changing.

Images of the city always conjure up stories and memories. Embedded in these memories is a sense of pastness, presentness and the evocation of a lost future, often played out in narratives of Johannesburg as an aspirational, cosmopolitan megacity, the myth of the “greying of the city”, as well as the anxiety of looming disorder and an apocalyptic ending. We only have to draw on the feverish optimism that engulfed the city during the 2010 World Cup (aspiration) or the debilitating and disturbing multiple xenophobic attacks (looming disorder).

Johannesburg is a city in flux and it is constantly looping around a rotating wheel of aspiration, desire, yearning, ambition, horror, terror and potential burning. Our experiences within the city disrupt the idea of time as being linear, simply and blindly marching forward. Nhlengethwa’s images do not contain disorder themselves but this does not strip them of the capacity to speak of its potential. 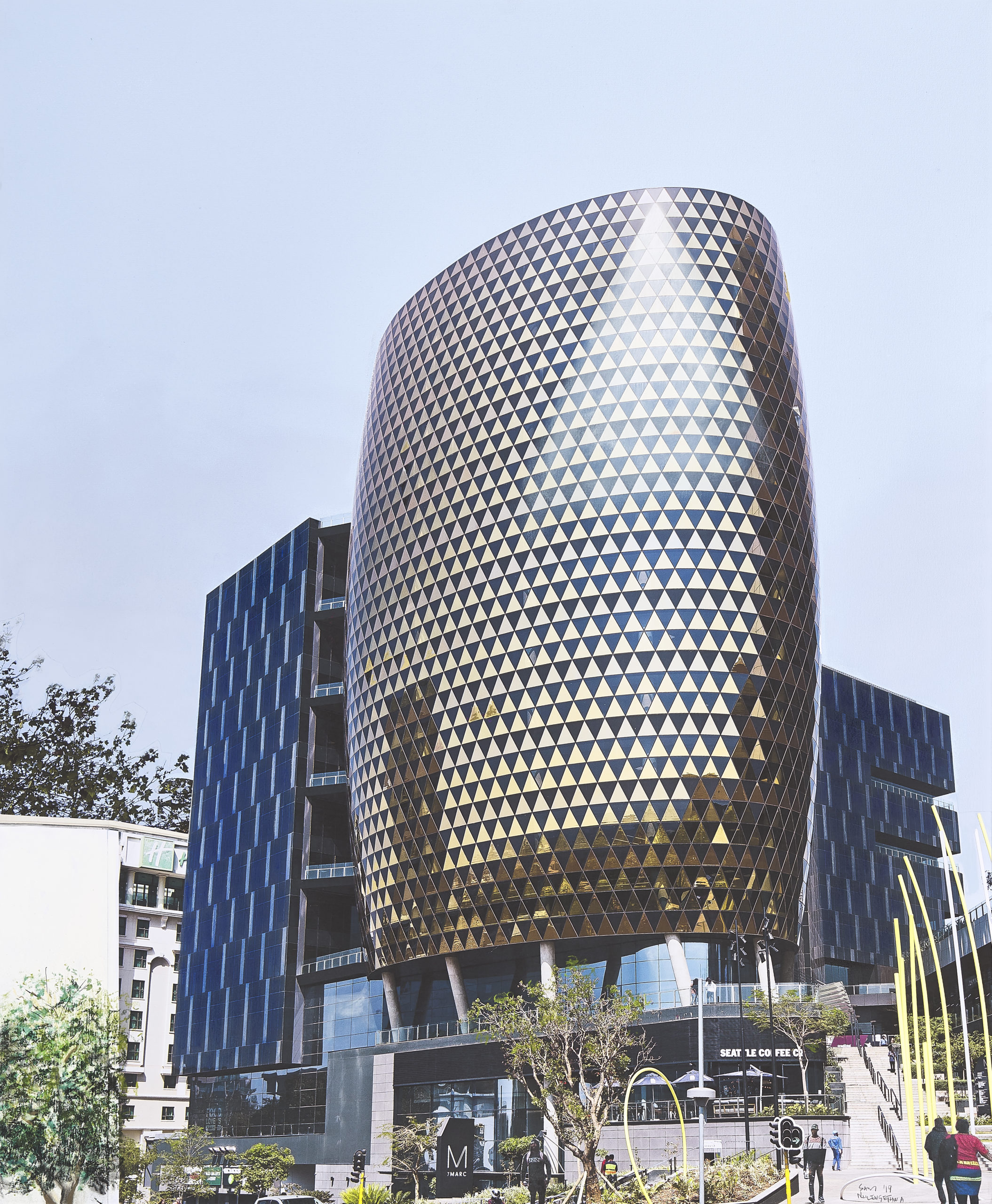 The easy thing to do would be to think of Nhlengethwa’s Joburg Selected as a simple document of the city — a series of sites and spaces depicted as they actually are — but, of course, the line between fact and fiction is thin, almost invisible. A closer look at the images — a looking in, looking through and looking beyond — reveals temporal and spatial fractures that allow us to reflect deeply on what we’re seeing.

For instance, if we look at the large panels of oil and collage on canvas, such as in I Love Jozi (2019), we’re confronted with an assemblage of walking and working figures against the backdrop of buildings and traffic. The most obvious and banal cityscape reveals important and contested realities that are, in fact, very difficult to think about, not to mention very difficult to talk about. Do the streets reflect the multiracialism of the city? What are the politics of labour and leisure that are evident in these images? How do different bodies lay claim to space? Where do people put their bodies and how does that relate to how other bodies move and exist? 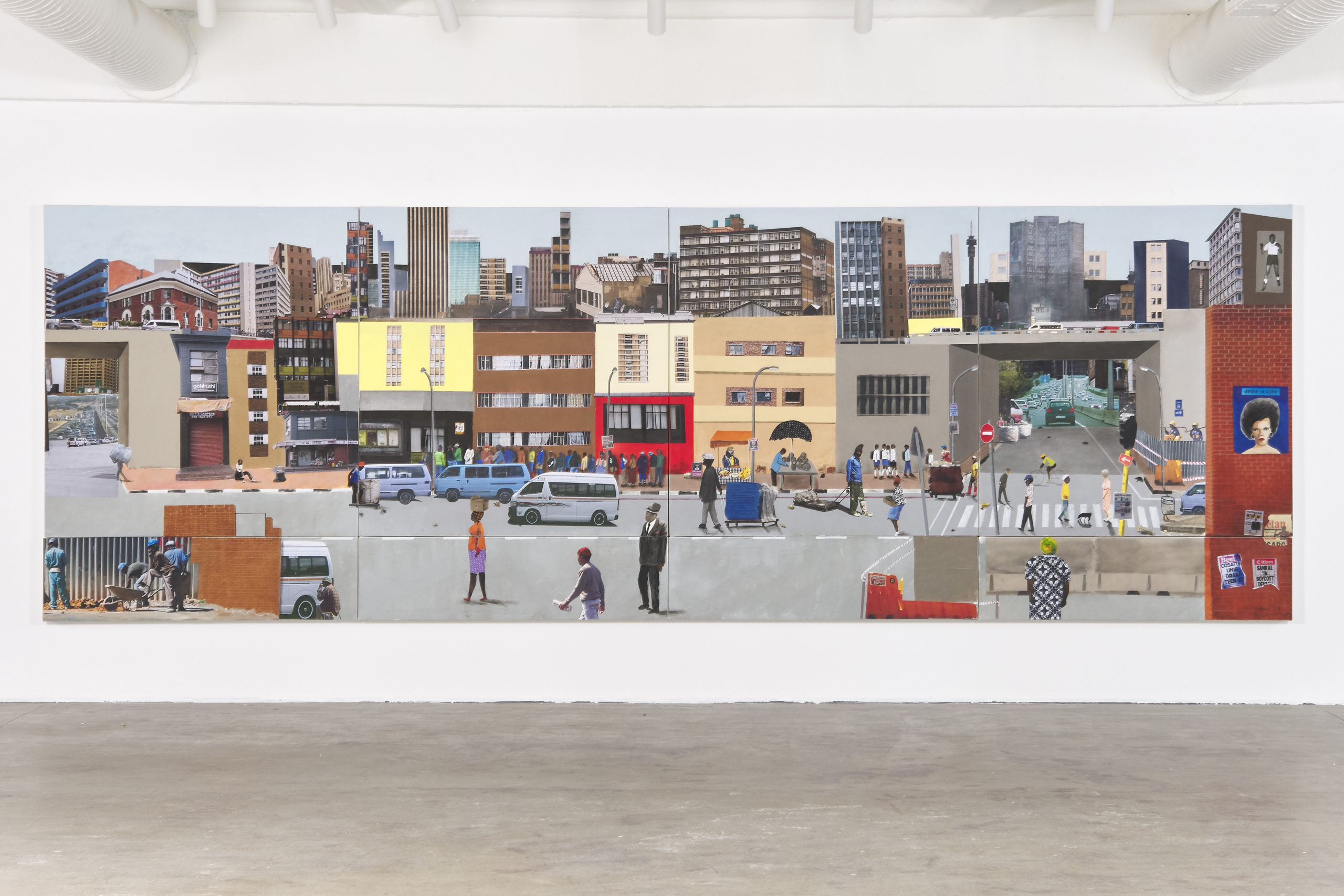 As you walk through the gallery, engaging each of the sites depicted, you can’t help but be overwhelmed by a sense of familiarity, only to be surprised by the disorientation of looking at something that you know so well yet are now experiencing differently. For instance, a photograph featuring the Standard Bank Building in Rosebank is punctuated by a group of men and women on the bottom left of the canvas. Their attire, and the fact that the images are in black and white suggests, that the figures are from a past era, possibly the apartheid era, as they are reminiscent of photographs captured by the likes of Santu Mofokeng, Ernest Cole and Ronald Ngilima. It is these small moments of tension between past and present that call for close looking as a form of engagement.

Although Johannesburg is a city that forgets, a city in which buildings are always being erected and abandoned, a city in which people flow in and through, it is also a city of in betweenness and self-contradiction. It is a city that is constantly shifting, while at the same time being stuck in the past with a long-gone hope of a future that may never come. The lithographic print of the now-defunct jazz club, The Orbit, conjures up nostalgic memories of jazz, dance and what no longer exists; the image of Wits Great Hall reminds us of empire, domination and what seems to be enduring, unchanging and lasting. This is a dance of binaries as the viewer must confront what is lasting and what is transient. 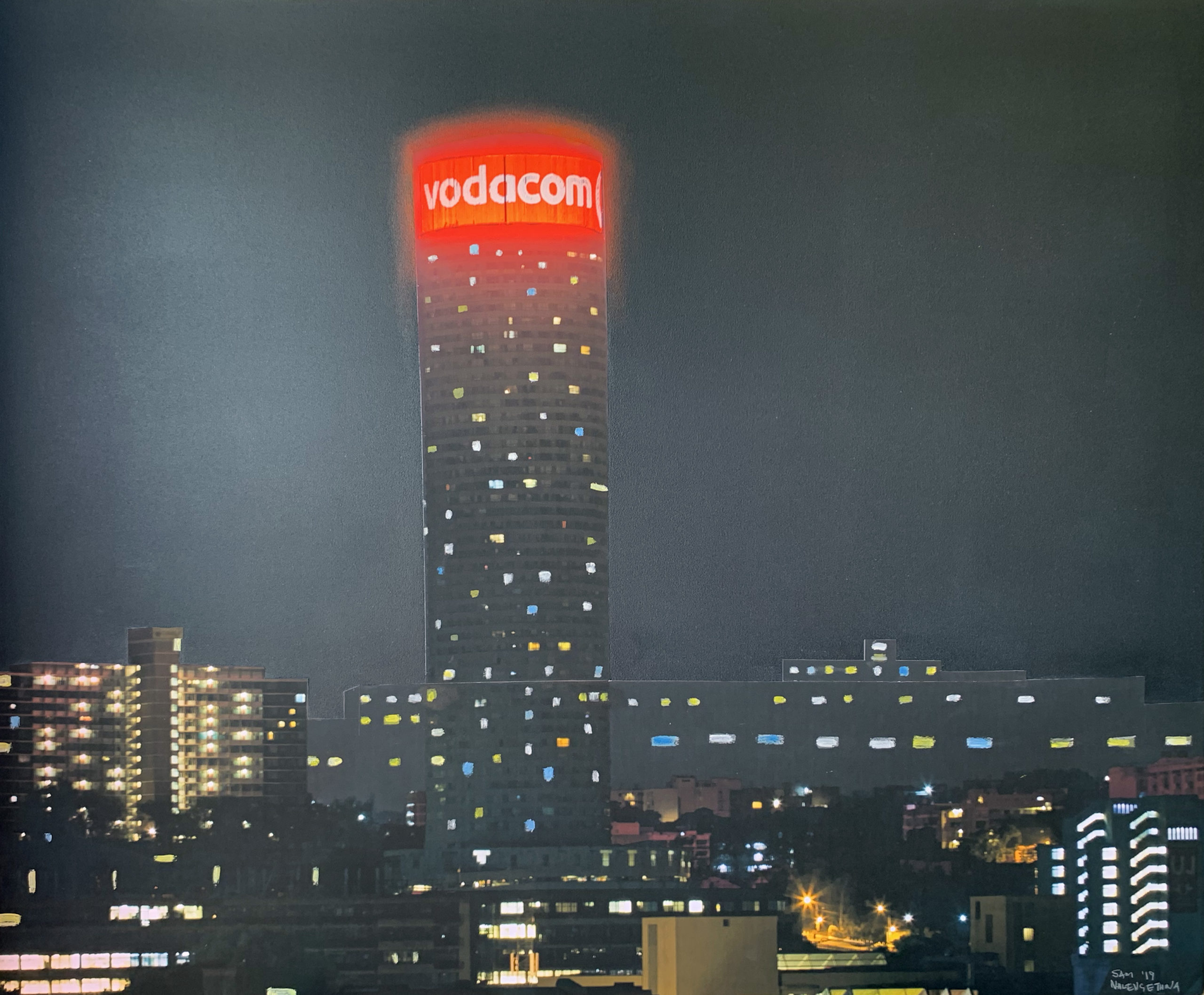 The rigidity of the lines ⁠— the squares, rectangles, triangles, trapezoids and hexagons scattered across the cityscape — allow Nhlengethwa to play with form. Ponte City Tower, the 54-storey brutalist cylinder with exposed concrete ribs is simultaneously an abstract ring with glistening shards of yellow, white and blue shapes against the skyline and a beacon, a symbol up which we project our hopes and fears about the city. One cannot think of Ponte without thinking of capitalism — the large banner of a telecommunications company around the tower does not let you forget — about neglect, home, refuge and a possible apocalypse. One cannot think about Ponte without thinking about contested ground, heroes, traitors, imperialists, victims and victimisers.

Joburg Selected reminds us of spaces that repel us, spaces that we adore and spaces we do not care for.

The images don’t just pull at the strings of memory: they bear witness, they lay claim to history and space, and they disrupt the flow of time while imbuing the exhibition with fiction, fantasy and horror.

Joburg Selected runs at the Goodman Gallery until November 19