In an interview with the Mail & Guardian Data Desk, the head of the country’s premier forensic investigation division — the Special Investigating Unit — said it is fixing internal problems and is focused on the public’s demand to see more criminals behind bars and looted money returned

After years of backlogs and perceived political interference, the Special Investigating Unit (SIU) is getting its act together and understands that the public wants the “big fish” in “orange overalls”.

The Mail & Guardian this week sat down in a no-holds-barred interview with the head of the unit, Advocate Andy Mothibi — who has been at the helm for three years.

With the corrupt seeming to act with impunity, he admitted that there is pressure on the unit to ensure consequences. “The public are saying that they would like to see people in orange overalls, this is very important. People must be held to account, they must be arrested, prosecuted and sentenced.”

To this end, he promised arrests at Eskom and Transnet in the near future.

There is also the matter of the hundreds of billions of rand that have been looted from state entities. Mothibi added that: “There is the civil part of recovery that is also as important as for the state to get its money back.”

These are things at the core of the unit’s responsibility — investigating looting, corruption and malpractice in state entities. The unit has wide-ranging powers. But they can only be applied under very specific conditions, after someone approaches the unit with a concrete case that needs to be investigated (and only if that case is not being investigated by another organ of state).

If a case ticks these boxes, the SIU then asks the president to sign a proclamation. This then allows it to exercise its significant powers: to issue subpoenas for information, search and seizures as well as the power to interrogate potential witnesses.

The unit reports directly to the department of justice and constitutional development and works closely with the National Prosecuting Authority (NPA), the South African Revenue Service (Sars) and the Hawks when arrests need to be made.

To make a dent in the hundreds of billions of rands that have been stolen, the SIU is finalising cases that deal with Eskom and Transnet. It is also working to have contracts worth R3.7-billion set aside. These range from the appointments of Trillian and Regiments Capital to render services, to the maladministration that occurred in relation to the Medupi and Kusile power station projects. Investigations are also being done into the SABC, water and sanitation department and multi-billion rand fleet contracts that had been awarded by the City of Johannesburg.

Mothibi told the M&G that the unit has been working closely with the NPA to wrap up a number of cases relating to the three parastatals.

“We expect some arrests in those sectors as we’ve been working very closely with the investigative directorate at the NPA. In fact, we have really assisted one another in making sure that there’s traction in those proclamations that we’ve been investigating at Eskom, Transnet, and Prasa [Passenger Rail Agency of South Africa].”

All of this is part of what seems to be an escalation of activity by the unit.

This is a recent phenomenon. An M&G analysis of the unit’s investigative data, going back five years, shows that it has not been good at meeting its own targets.

In 2014, just 12 proclamations were issued. A proclamation is what the unit sends to the president to sign off, which then allows it to formally investigate allegations. Once these investigations have been completed, the SIU either starts civil litigation or refers the case for disciplinary action, or criminal prosecution by the NPA.

This financial year, 20 proclamations were signed off by President Cyril Ramaphosa. The number of referrals has also almost doubled, with 331 cases referred to the NPA. These range from allegations of corruption and maladministration to unlawful conduct at entities such as the South African Social Security Agency (Sassa), the water and sanitation department as well a host of municipalities.

It means that these entities — and people in them — can now be prosecuted.

That is if the unit can catch up on its backlog. Three of the cases date all the way back to 2010. One of these deals with allegations of unlawful payment of social grants in respect of deceased or fictitious people by Sassa.

There is also a probe into irregular, fruitless and wasteful expenditure incurred by the department of public works, which made payments that were not owed.

The unit was also still investigating the Tshwane Metropolitan Municipality where officials were paid allowances and other benefits that were not due to them, as well as the mismanagement of finances and resources of the municipality. These cases were finalised only last year and the reports sent to the presidency.

Other state entities, such as arms company Denel and Prasa, are also part of cases that have been sent to a newly established tribunal, which is sitting at the Booysens magistrate’s court. That tribunal was specifically set up — in October — to deal with cases emanating from SIU investigations, because of the backlog facing courts.

According to Mothibi, there are also six Life Esidimeni cases that are before the tribunal to the value of about R5-million that must be reclaimed from the non-governmental institutions. “Though it doesn’t sound like a big amount, this [Life Esidimeni — where 143 people died in psychiatric care] created a lot of pain to the public and we would like to make sure that whoever is responsible is held to account,” he said.

In the case of the Nkandla upgrades to the former president Jacob Zuma’s home, the investigation and any consequences have been stuck in a court process since 2013.

And, although the SIU filed papers for damages of over R155-million against Minenhle Makhanya, the architect for the Nkandla upgrades, back in 2014, no money has yet been recovered.

Mothibi said: “We are currently engaging with the high court judges, to assist us in fast-tracking many of these cases. But from now on most of our civil litigation cases that we have full control over will be referred to the tribunal so we can recover funds quicker and return them to the specific entity.”

“There is not one instance where I have seen in my experience that the president has ever turned down or refused to sign a proclamation. The SIU has been able to do its work.

“And obviously, the SIU leadership itself is very key to ensure that it executes on its work. So up until today, it’s really just been operational improvements. But we really have to make sure to avoid all of those instances where cases date back to five, six, and seven years,” he said.

Rather than political interference, he pointed to bottlenecks being the reason that fewer cases were handled in the past.

The main ones were the fact that investigators at a provincial and national level all had to report to one centre, and wide-ranging proclamations that stopped the unit narrowing down on a crime that could be prosecuted.

The solution, he said, has been to “run [provinces] as independent cost centres. If you have proclamations in the province, they should be focused on that so you don’t have all these lines blurred”.

One of those provincial cases is that of the Amahlathi municipality, where last week the municipal manager Balisa King Socikwa and Kwane Capital’s director, Mcebisi Mlonzi, were arrested for fraud to the tune of R92-million. Charges against them include money laundering and contravention of the Municipal Finance Management Act. This investigation dates back to 2016.

For its work, the SIU is paid by the entities that call it in to conduct an investigation. Some of these entities, however, have not paid, with half a billion rand owed to it. 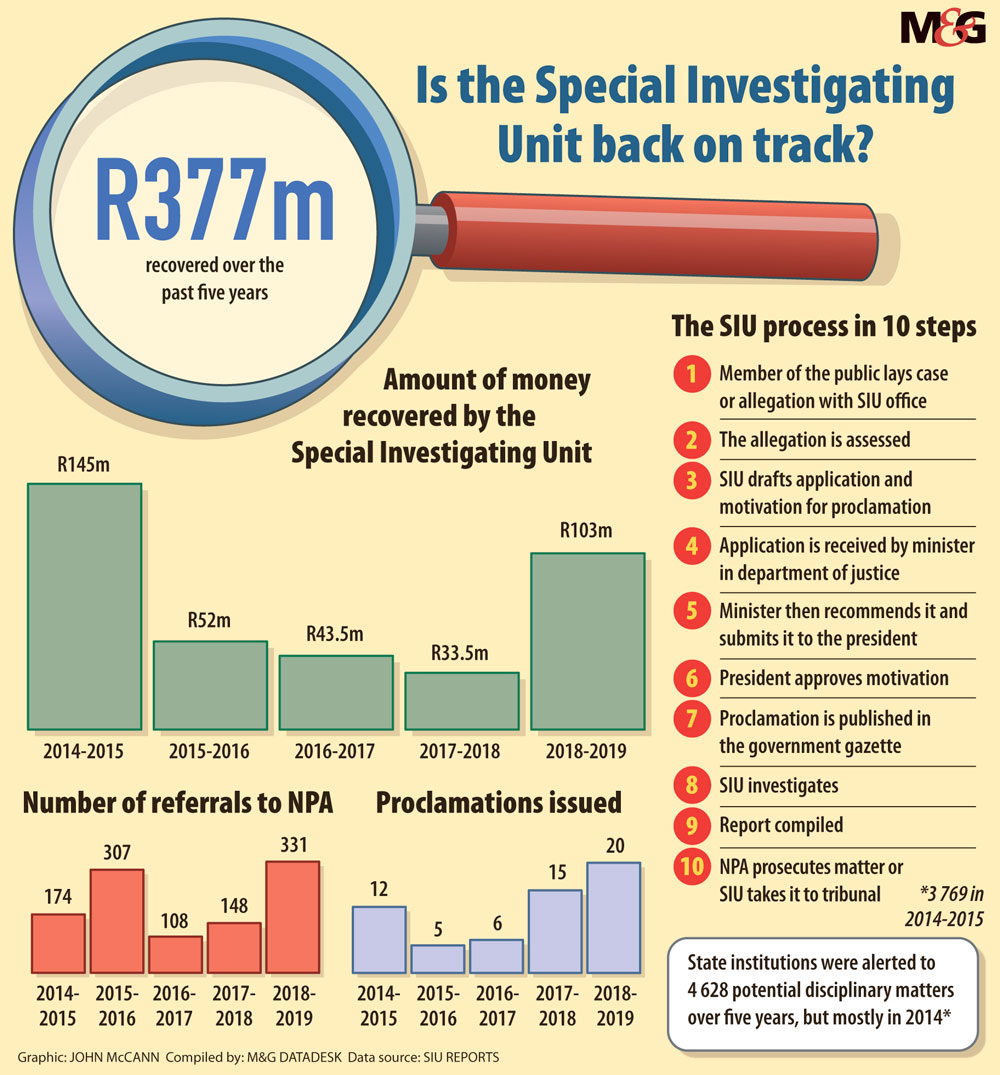 The biggest culprit that has been referred to the Special Investigating Unit for investigation is the department of public works. The Mail & Guardian Data Desk’s analysis shows that over the past five years there have been eight proclamations signed that relate to the department and its irregular, fruitless and wasteful expenditure. One SIU report found that a contractor was paid money they were not entitled to and that R4.7-million should be recovered. According to the SIU, they have investigated about 1 000 leases connected to the department and they are hoping to recover R327-million.

One of the big cases the SIU has been working on since 2016 is the failed multibillion-rand Giyani water project. Last week the SIU raided the Lepelle Northern Water board’s offices, after it had failed to co-operate. According to the unit’s head, Advocate Andy Mothibi, there were irregularities in the way the contract was awarded. “The work done is also of poor quality. So now we are in court to cancel the contract and get the recoveries on a just and equitable basis.”

About R831-million has been recovered by the SIU in cases relating to land restitution. The investigation team found that there were fictitious beneficiaries, people were claiming land that did not belong to them and there was collusion between officers in the department of rural development and claimants. In one instance a fraudulent land claim amounting to more than half a billion rand was set aside.