The Aurum Institute is proud to have been at the forefront of adopting technologies such as the Pelebox that put the patient at the centre of care in Ekurhuleni and districts in the North West province. Aurum, supported by Pepfar (the US President’s Emergency Plan for Aids Relief) through the US Centers for Disease Control and Prevention (CDC), officially launched the Pelebox at the Winnie Mandela Clinic in Tembisa, in July 2019.

The Pelebox, a digital locker solution that uses the power of technology not only to improve the delivery of healthcare services but also make it more patient centred, was named one of Time magazine’s 100 Best Inventions for 2019. The comprises 100 ground-breaking inventions that are changing the way we live, work, play and think about what’s possible.

“As the Pelebox team, having The Aurum Institute as a partner has really helped us in scaling to get into more sites, reach more patients, and go from a start-up to a scale-up. We could not have wished for a better partner,” said Neo Hutiri, founder of TechnoVera and creator of the Pelebox.

Since the adoption of the test and treat policy, South Africa’s HIV treatment programme has arguably become the largest in the world, with 5-million people on antiretroviral therapy (ART). With most people collecting ART and other chronic medication from government health facilities, long queues have become a norm. This is not only an inconvenience but, of most concern, it can impact adherence to life-saving medication.

Hutiri was one of those who spent hours queueing to collect TB medication in 2014. By the time his six-month treatment was finished, Hutiri was so frustrated at the time wasted on the clinic bench that he took it upon himself to invent a smart solution for chronic medicine dispensing. 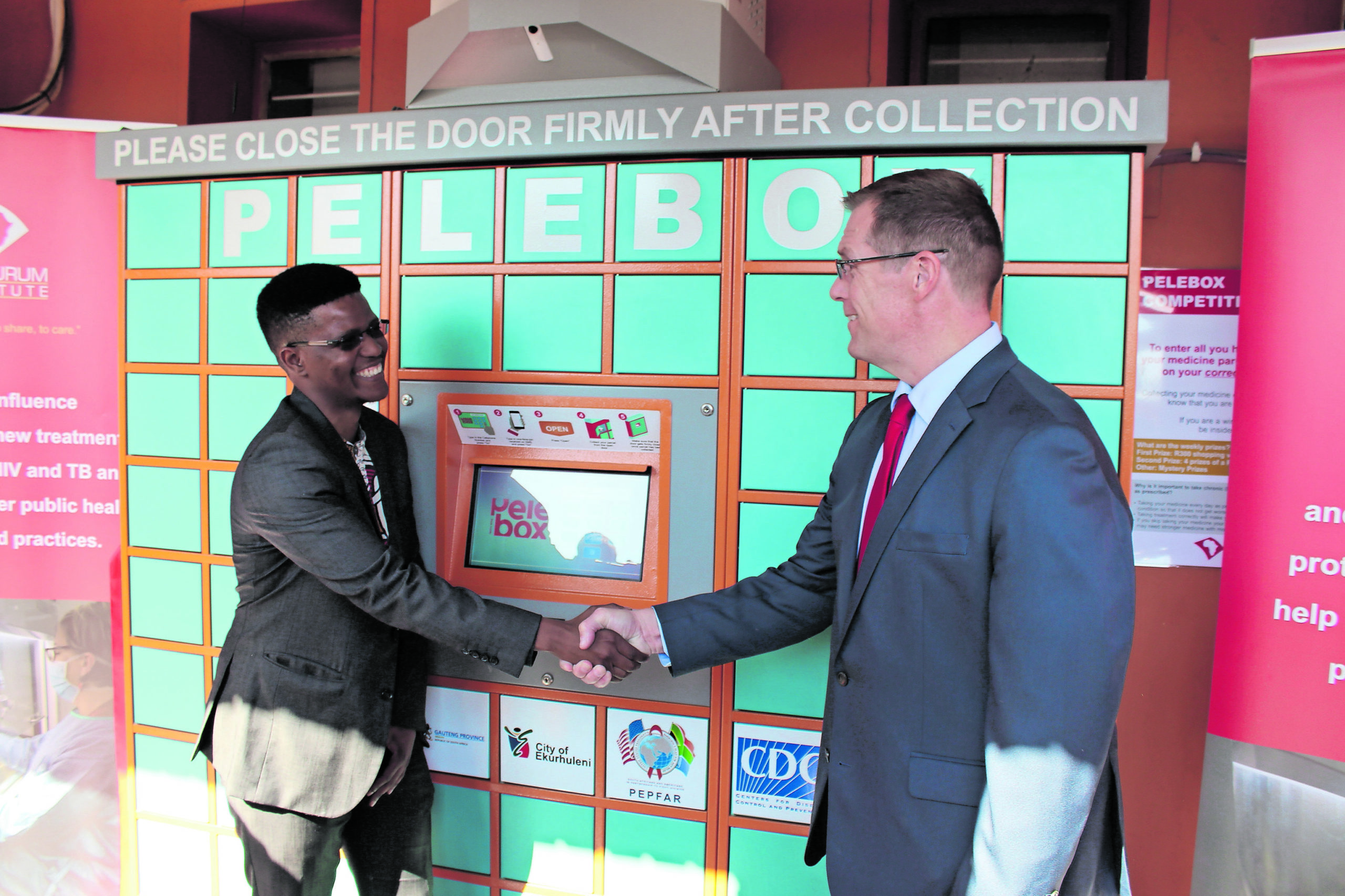 Neo Hutiri, inventor of the Pelebox, at the launch organised by the Aurum Institute at the Winnie Mandela Clinic

The PeleBox is a computer-controlled vending machine with 72 lockers loaded with specific patients’ chronic medication. A patient is notified via SMS to come and collect. Once at the PeleBox, the patient enters their phone number on a touch-screen tablet and receives a one-time pin to open the designated locker in which their medication was packed.

The PeleBox can serve up to 1 400 patients per month, each within seconds. It is airconditioned, with eight-hour backup power and features video recordings of collections as a security measure. Hutiri designed the PeleBox to be simple and user friendly, making it the most preferred method of chronic medication collection among users to whom it was offered.

It earned him the Royal Academy of Engineering’s Africa Prize for Engineering Innovation last year.

Such a time-saving and convenient solution can go a long way towards increasing adherence to treatment. As adherence leads to viral suppression (when ART reduces a person’s viral load to an undetectable level), it is crucial for the achievement of the second and third Unaids 90-90-90 targets, to which South Africa has committed.

Recognising this, The Aurum Institute partnered with Hutiri and was the first to upscale the project from a single pilot site to full rollout at clinics within the Ekurhuleni health district in Gauteng.

“This has huge potential for convenient, quick medication collection which goes beyond HIV drugs and could benefits thousands of other chronic medication users. We are hoping to eventually have these across the country and give more patients a quicker, better experience,” said Aurum chief operations officer for health programmes, Dr Dino Rech.

This is part of Aurum’s mission to support and implement innovative, integrated and high-impact programmes to eradicate HIV and TB.

Since April last year, 10 PeleBoxes have been installed and are active, enabling more than 8 000 collections, with a 100% accuracy rate on medication dispensed to date. Aurum plans to roll out PeleBox to North West province early next year.

About the Aurum Institute

The Aurum Institute is a proudly African, health impact organisation dedicated to researching, supporting and implementing innovative, integrated approaches to global health. Since it started operations in 1998, Aurum has grown to become a leading global health and research institute, employing over 3 000 staff. Aurum partners with governments, the private sector and civil society to design and deliver high-quality care and treatment to people in developing communities.