The last French speakers in Lagos

This story was produced in partnership with the Pulitzer Center for Crisis Reporting, the Humanitarian OpenStreetMap Team and Code for Africa

Every morning, without fail, Sunday Ajongun kneels down and says a prayer together with his wife and two young children. The prayers are said in a medley of languages. Unusually in Africa’s most populous Anglophone nation, English is not one of them.

Ajongun and his family are among a tiny community of French speakers living and working in the heart of Lagos. They trace their roots to the nearby border with Benin — which was colonised by France — and French remains an important part of their linguistic identity, together with Egun and Yoruba. Ajongun speaks French with his children, and they attend one of the city’s few French-medium schools.

But the space for the city’s French-speaking community is shrinking. Ajongun used to live in Ilubirin, a waterfront community in Lagos that was knocked down by the government a few years ago to make way for a high-rise building project. The area was home to many Béninoise fishing families, Ajongun’s among them, but they were all forced to relocate.

Ajongun’s family moved to Makoko, one of the city’s most storied areas. It is a floating suburb, built above the water on stilts and wooden planks. Underneath Ajongun’s new home are the murky waters of the Lagos Lagoon, littered with plastic and human waste.

“I moved here from Ilubirin for work because I could catch more fish and it has felt just like home,” Ajongun tells the Mail & Guardian. Now Ajongun and his family are even closer to the sea.

The Makoko slum is officially home to about 300 000 people, but local chiefs claim more than a million people actually live there. It was established in the 1800s as a fishing community and has grown in size and scale ever since, absorbing fishermen from neighbouring areas that have become part of the urban sprawl.

Makoko’s main language is Egun, which is spoken in parts of both Benin and Nigeria. But although the border between the two countries is only 70km away, it is felt in the other tongues spoken by residents here: English for those whose ancestors were from within modern-day Nigeria, and French for those who hail originally from Benin.

The French speakers are outnumbered, of course: the Francophone community in Makoko is estimated at a little more than 100 000 people by traditional authorities. But the language is popular enough that there is a primary school — the Pythagore Bilingual — to cater for French speakers, which is where Ajongun sends his children.

“It is important to me that my children go to school and are able to read and write. I hope and pray they are able to go to university in the future,” Ajongun says. He holds a primary school certificate from the Benin Republic, and the West African senior school leaving certificate.

The school is a few minutes away from Ajongun’s home. Every morning a canoe from the school snakes through the stilts, picking up children from their homes and transporting them so they arrive just in time for the start of school.

To Ajongun, the school is a tether to his origins as a Béninoise man. Despite living all his life in Lagos, he does not understand or speak any English, and his French roots remain very important to him. “I was born in Lagos, my mother was born in Lagos and my children were born here. But I still have a big extended family across the border — a family I am still in contact with,” he says.

There is no sign at the school. Instead, the school is described by a local as “the point of loudest shouting”. A single canoe, belonging to a teacher, is tethered with a rope in front of the building.

In six classes in a single-storey building, the pupils of the Pythagore Bilingual are often repeating after the teachers. The students of the school are mostly of Béninoise origin. The school teaches some classes in English to serve the “more Nigerian” community of Makoko.

“It is a mix. We have parents who want their children to learn in English; we have parents who want French. Some parents want both because we don’t know where tomorrow will take them,” says Janvier Whedobo, the school administrator.Whedobo also teaches science and civic studies at the school, which caters for about 200 pupils. It is not accredited by the government, like several other schools in Makoko, and students must attend another school for their last year of primary education before they can be enrolled in secondary school. 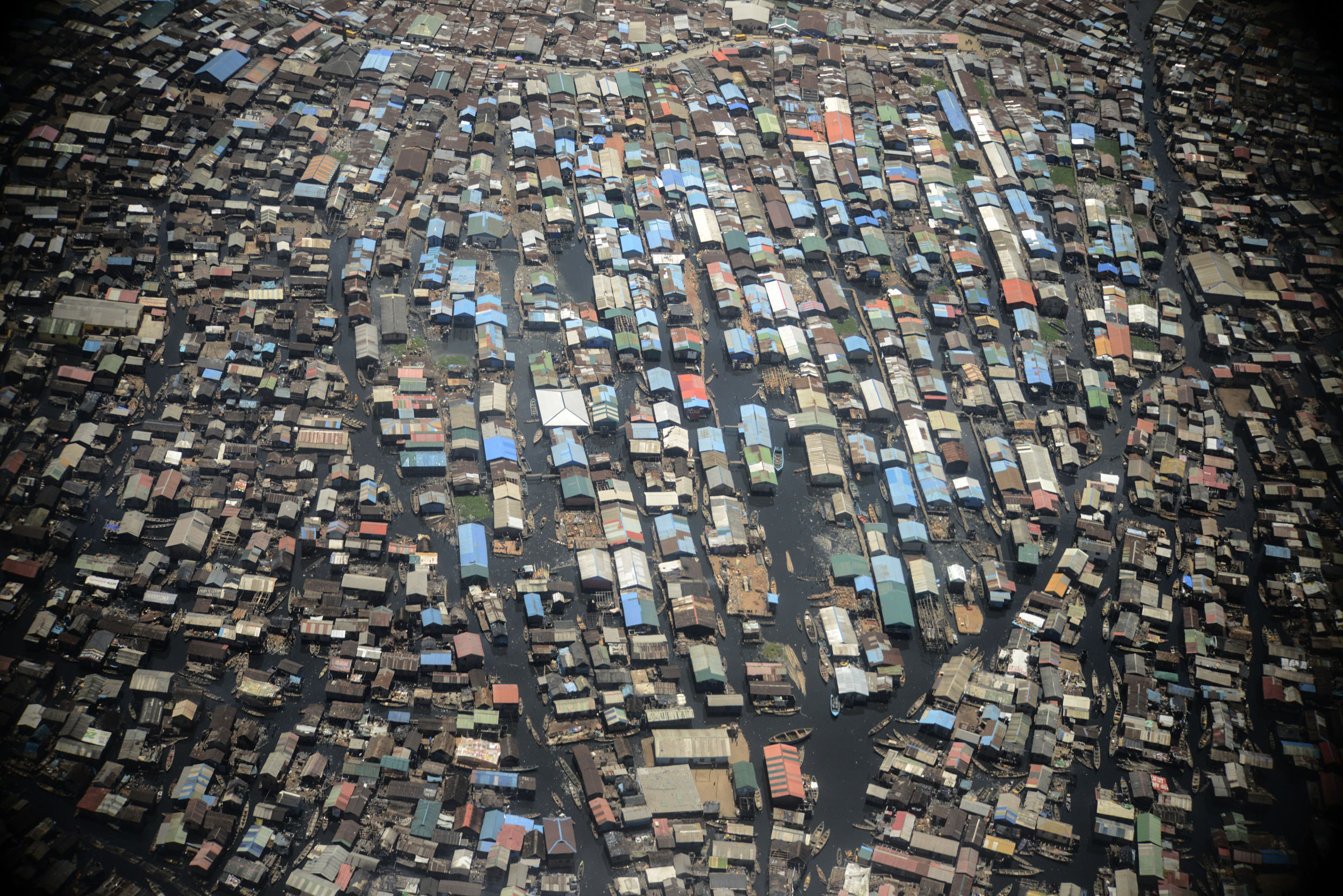 Nigerian authorities have a habit of making life difficult for the residents of Makoko, which is officially viewed as a public health and safety concern. As recently as October 2016, the governor of Lagos was threatening to oversee the “demolition of all the shanties” around the creeks and waterways of Lagos. Ajongun’s former home in Ilubirin was demolished by a state government task force before the announcement.

“Even today, we still fear that an act of the government will take away our land,” says Chief Victor Panke, one of Makoko’s five local chiefs. He said that Makoko has historically been a refuge for displaced residents of waterfront communities — for people that do not belong anywhere else — and that it needs to remain that way.

“Because we are the same people, when the communities were demolished, they were able to come here and feet at home. We are the same Egun people speaking Egun and French and Yoruba,” he says.

Ajongun does not know what he would do if he were evicted from his current home. The prospect is a source of great anxiety, because although he can live and thrive in Makoko, where he can get by with his Egun and French, Lagos proper is much less forgiving.

He thinks that it might be wiser to educate his next children in English. “My younger brother understands English. When my next child comes, I will put them in the school to learn in English, as they are learning in French,” he says.

To the government of Lagos, Makoko should not exist. It is viewed by authorities as an informal, temporary settlement that tarnishes the city’s image — even though it has existed in some form or another for more than a century. But its residents experience it very differently, emphasising the positives of a thriving, bustling community that caters for people who would struggle to live elsewhere.

An ambitious project to map the streets and waterways of Makoko hopes to lend some permanence to the suburb by giving it a cartographic identity.

The idea behind the maps is to have everybody see that Makoko is not some faceless, impenetrable slum, but instead is home to people, churches, schools, shops, banks and offices.

This might force local authorities to start planning for Makoko instead of trying to erase it in favour of a new waterfront development.

The project was launched in September by nonprofit organisation Code for Africa, in partnership with Humanitarian OpenStreetMap.

“We hope the maps are able to factor into conversations about the development of Lagos and communities like Makoko. We are interested in driving social and financial inclusion at this historically underserved community while also pushing for their land rights to be recognised,” said Jacopo Ottaviani, the chief data officer at Code for Africa.

To map Makoko, Code for Africa taught several Makoko residents to fly drones and input points of interest into the map. The Pythagore Bilingual school was one of the first schools marked on the Makoko map, which is still a work in progress.

“We are hoping the map they are doing will make the government leave us finally and come develop this place,” said Chief Victor Panke.