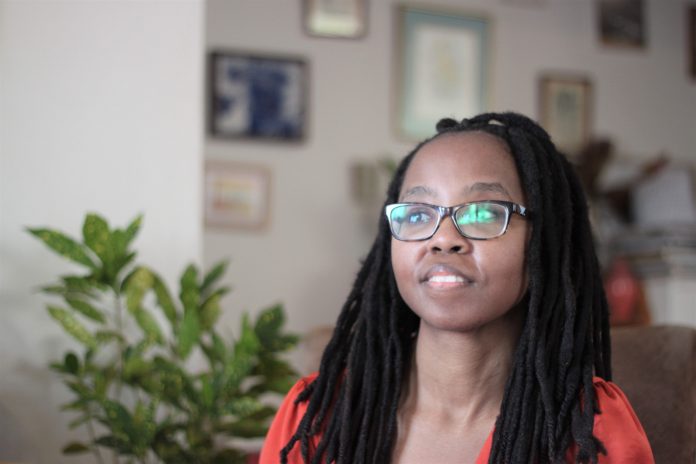 In a close-knit community, bound by traditions and customs, can love truly conquer all — even death? This is the theme in Bonie Sithebe’s upcoming movie, Valley of a Thousand Hills.

It was shot in and named after the sunny, humid and luscious Valley of a Thousand Hills, located between Pietermaritzburg and Durban in KwaZulu-Natal.

Against this backdrop, two women, Thenjiwe Radebe and Nosipho Mpanza, are secretly in love. But as they grow into adults and life demands to be lived, it becomes unbearable to keep their love rolled tightly in a bud.

However, their sexuality is a speck in the eyes of those around them — and as the film shows — the community and some family members ignore their own flaws in order to separate the two lovers.

The majestic looking Thenjiwe, with skin that shimmers against the sun — and a domineering personality — manages to topple people’s prejudices. Her own mother eventually takes her to a traditional healer to get her exorcised from the “evil” spirit.

Meanwhile, Nosipho is a good-natured kid who has always coloured inside the lines, but no one knows about her sexuality. She and her father raised each other after her mom died when she was only 12 years old. Nosipho’s father, while battling an illness, is respected in the community and he has been able to raise a daughter that adheres to tradition.

To thank her for being a good daughter — by keeping her virginity — her father plans her Umemulo, which is a Zulu traditional ceremony for women coming of age. This ritual is usually done for females at the age of 21 years old. To seal off his parenting skills, he then proceeds to arrange a marriage ceremony for her, even though she’s expressed that getting married to a man is not part of her plans.

However, her father’s illness and her romantic static, make it difficult for Nosipho to unshackle herself from people’s expectations. Especially that of her father, actually, the only one whose expectations matters.

Compounded by the responsibility to continue being a well-respected daughter in the community and upholding her father’s wishes, Nospiho decides to maintain the status quo and marry a man. But it does not end there.

While trying to tell this love story, Sithebe also incorporates challenges, backlashes and abuse that same-sex couples face, such as using rape to “correct” someone’s sexuality.

Sithebe is one of the two female filmmakers chosen out of a myriad applications by the  KwaZulu Natal Film Commission to participate at the 75th Festival de Cannes; which takes place in France from 17-27 May 2022. She has also worked in local productions such as Imbewu on e.tv and Maskandi Queen on Showmax.

This is a first for the commission to send two female filmmakers. The other storyteller is Sithabile Mkhize, who is working on a film titled, God’s Work. The movie tells a story of four homeless friends who are caught between escaping their hardships and being swallowed up in the process. The film is a profound and satirical exploration of people  that exist on the margins of society.

Speaking over a Zoom call, while in a hotel, preparing to go to Cannes, Sithebe says she created this film because she wanted to tell a love story: “I was not writing a gay story, I was writing a love story and love is universal,” she says.

The cinematography is filled with beautiful hues of red, green, grey and brown, that make the film a visually pleasing experience.

Sithebe says all of it was deliberate. “I want red to be red. The colour symbolises love and death. It’s warm and the colour of love,” she says, while adding that she used these colours to help her bring the story to life.

“I told my director of photography that I do not want you to cut; I want my actors to finish acting,” she says as she was explaining the camera work in some of the scenes that appear as though the camera is standing still while the characters continue to play out their emotions.

“I sat down with my actors and I said to them that they have rehearsed for a long time. I told them I want them to live the story so much that the camera is just something that is just observing them,” explains the filmmaker.

“If you notice, some scenes are just one take. They would act it out [the scene] without stopping,” she continues.

Lead actors in the movie, Mandisa Vilakazi (Nosipho), and Sibongokuhle Nkosi (Thenjiwe) are not well known. Sithebe says that this is because when she was writing the film, she had not yet seen the actors on screen that could potentially play these characters, “so I opened up and searched for new faces”.

This is not Sithebe’s first time at Cannes, however. She was there about five years ago, when the story was in development. At the time, she was young and trying to understand the film industry. Cannes was overwhelming and she did not scoop any deals.

“Being at Cannes is every filmmaker’s dream. To have been selected to attend this year’s [festival] I am beyond grateful because I know that there were so many applicants who didn’t get this chance.

I was also inspired by a film that was also screened there at Cannes a few years back from Africa that received a standing ovation and I said to myself, ‘this is where my next film is going to be’,” says Sithebe.

Now she is there to sell the film — and hopefully get distributors to buy it and place it on international platforms. She will also be pitching a new movie.

“I want to show them that I was just not talking, I wanted to make the film”, she says about going back to the festival. “I am meeting the people I told about the film again  — they were interested. It’s just that people do not want to invest in you if no one has invested in you”.

The KwaZulu Natal Film’s will participate at the Pavillon Afriques which creates a unique venue for movie and trade promotion while outlining the diversity of African cinema.

Sithebe will have a pitching session and as Mkhize’s film is still in the development stage, she will be meeting the relevant financiers and distributors.

Jackie Motsepe, KZN Film Commission’s chief operating officer, says they are at Cannes to promote the province as a film destination of choice and showcase its content to buyers and distributors.

“This is a great milestone for the country, particularly the KZN province. We want stories that can travel the world, stories that tell the KZN story and these films resemble exactly that.”

The commission will also participate in different panel discussions.