A new play highlights the reality of living with albinism, poverty, and prejudice in South Africa 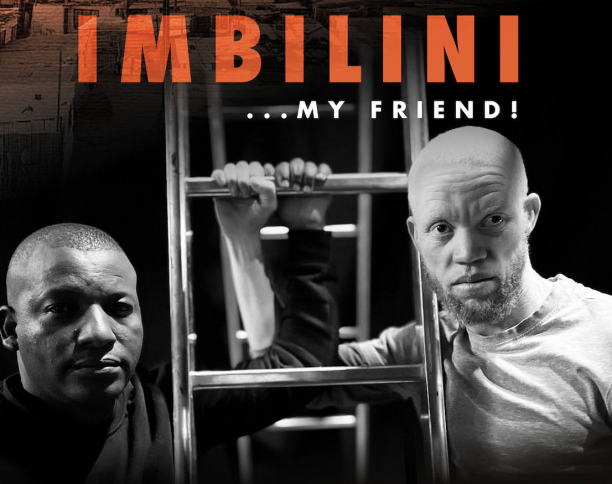 It’s lights, cellphones off and action this June when two actors step up to the plate to tell the challenging story of the duality of friendship in poverty in the new Baxter Theatre play Imbilini …  My Friend! The play speaks volumes of the daily experience of living with albinism in South African urban society. Written and performed by Bulelani Mabutyana and Siphenathi Mayekiso, Imbilini runs at Cape Town’s Baxter Theatre from 9 to 25 June 2022.

Combined with Makeyiso’s real-world experience of living with albinism, the play is a story of a friendship that protects the two during a life of poverty, the effects of alcoholism, and society’s preconceptions of Makeyiso as an individual born with albinism.

Imbilini means “inside” in isiXhosa and the play is written as “an ode to their friendship, one of protectiveness amid society’s warped beliefs about albinism”, including albino killings, according to the Baxter Theatre. The real world challenges explored by Mabutyana and Makeyiso are the harsh realities faced by many in South Africa, whether it be poverty, a loved one’s difficulty with alcoholism or prejudice.

Growing up in Philippi, Cape Town, Mayekiso’s experiences, (and that of so many), is exported to the stage of the Baxter Theatre to highlight the daily struggles of the reality of our poverty-stricken society. From alcoholism as a common crutch to help deal with the often life-threatening and harsh reality, to protecting one’s friend from those who want to hurt them, Imbilini is an important lense of theatrical storytelling of adversity.

The hard-hitting nature of the story that underpins the play shows theatre to be a valuable tool for building social awareness, connection and engagement between people from different backgrounds to tell their stories.

The Baxter Theatre, with its bright lights, grand entrance and foyer, was the incubator for the many true stories and lived experiences that went into Imbilini. The play is also born out of a four-month long residency through the Baxter Theatre’s Special Talent programme. Over four months in 2021, Makeyiso and Mabutyana received financial resources, valuable time and space for writing and worked with others in the theatre world to bring their screenplays to life.

Under the guidance of theatre legend Lara Foot – the chief executive and artistic director of the Baxter Theatre – the two actors are nurtured to navigatie their story and bring it to life on the stage. Joining Foot, the play is directed by another South African theatre heavyweight, Mdu Kweyama, who is behind other famous plays such as Shadow Boxing; and The Goat, or Who is Sylvia? on New York City’s broadway.

Imbilini is not Makeyiso and Mabutyana’s first theatre rodeo: they are both graduates from Observatory’s Magnet Theatre and recipients of numerous theatrical and acting awards.

Mabutyana is not only a talented actor and creative director of Ukao Theatre Company, but an emerging director with the production of Worst of Both Worlds under his belt, a play that also highlights harsh realities of contemporary South African society: female human trafficking and drug trade.

His co-star, Mayekiso has won two Kyknet Silwerskerm awards for his acting in Nommer 27, a short film. Mayekiso proves to be a multi-faceted performer with performances in the dancing and puppetry arenas, while driving the Magnet Theatre’s Culture Gangs Project. Mayekiso’s activism-driven performance in his latest production too, is not a first. His 2021 performance in Trapped, challenged the stereotype that there is a “trapped mentality” faced by many individuals born with disabilities, according to the Baxter Theatre.

Imbilini is the product of years worth of nurturing and mentorship by the Baxter Theatre and its Baxter Masambe Playlab, made up of 10 theatre creatives – including both Makeyiso and Mabutyana – who work and bounce ideas off of one ideas and curate a collaborative spirit to incubate their ideas, until they grow into a fully produced play.

The two dramaturgs on stage in Imbilini… my friend! will debut their performance at the Baxter Theatre on 9 June and it runs until 25 June. Adult tickets are R120, student tickets and early bird tickets are R100. Please note that there is an age restriction of 13 years.

Kimberley Schoeman
Kimberley Schoeman is a sophisticated and eccentric wordsmith at the Mail & Guardian. A tastemaker in the making, she is in pursuit of the best in culture, fashion, and style.
Facebook
Twitter
WhatsApp
Linkedin