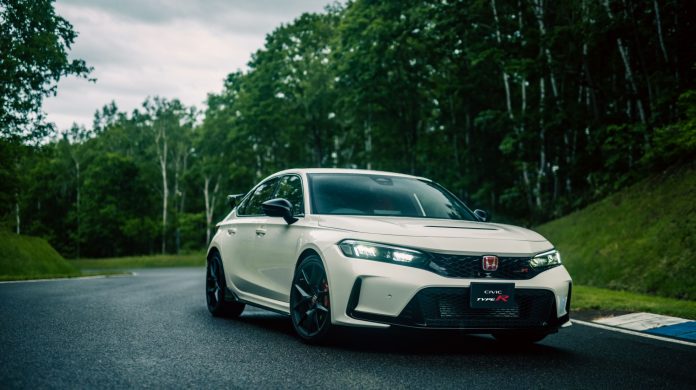 In its pre-production glory, the Honda Civic Type R broke the Suzuka Circuit lap record for front-wheel drive vehicles after lapping the 5.8km track in 2:23.120

This was followed by a few runs around the Nürburgring while sporting heavy camouflage. Now Honda has officially taken the camo off its new Type R, which is based on the 11th generation of the Civic.

At this stage, Honda isn’t keen on revealing significant information such as power and performance but has said we are looking at the fastest and most powerful Type R-branded vehicle.

The new Civic Type R has been made longer, lower and wider while featuring advanced aerodynamics. It has a sporty honeycomb grille, bigger front fender grilles, a new side sill design, strong fenders and lightweight wheels wrapped in wider tyres for extra traction.

Moving to the rear, the Type R spawns wider rear doors, a reworked rear spoiler, plus a reshaped rear bumper that houses three round exhaust tips and a new diffuser. It can be had in five exterior shades; historic championship white, rallye red, boost blue, crystal black pearl and sonic grey pearl.

The interior comes fitted with performance-focused details and features such as red seats, carpet and trim and a serialised Type R plate on the dashboard. The seats boast suede-like upholstery with a “high friction coefficient”.

The Honda Civic Type R gets a new +R driving mode, a lower multi-information display, plus a stopwatch to record lap times. The Type R can also share driving videos.

For now, we don’t know much about the engine. But Honda says the Civic Type R has a more powerful and responsive 2.0-litre turbocharged petrol engine. It also has a better six-speed manual transmission and rev-matching system. The suspension and steering performance is said to also have been improved.

Pricing and additional details on the Civic Type R will be provided as they become available.