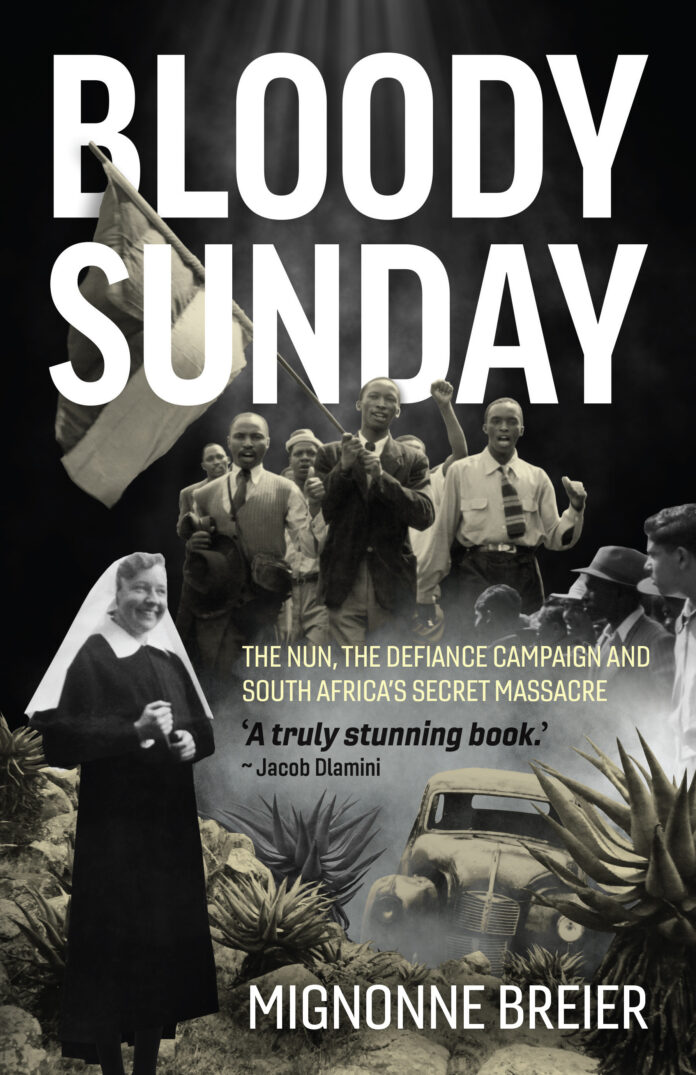 In many respects, the publication this April of Bloody Sunday: The Nun, the Defiance Campaign and South Africa’s Secret Massacre by Mignonne Breier is timely. It responds to an ongoing quest and need to foreground what scholars Leslie Bank and Benedict Carton term “a canonical episode in the liberation struggle” in the public discourse of historical events, which have not enjoyed the attention and consideration they deserve.

Furthermore, Breier delves into aspects about the massacre that have long divided and eluded scholars who have attempted to make sense of this particularly dark and shameful event in South African historiography (the writing of history). The nun, Sister Aidan, was one of two white people killed during the riots resulting from the massacre of what is believed to be over 200 people during the Defiance Campaign near East London on 9 November 1952. Sister Aidan, however, was burnt by the protesters and her body was mutilated and parts of her flesh allegedly consumed.

Breier’s preface enables the reader to embrace her bona fides and interest in the tragedy and contextualise her sensitive approach to this historical event. It is here that she introduces her interest in the killing of Sister Aidan in Duncan Village in 1952, which leads her to the massacre of over 200 people. This makes this incident the worst massacre in the struggle against apartheid, surpassing the much publicised Sharpeville massacre of 21 March 1960. It immediately renders her treatment of the controversial incident both accessible and understandable to as broad a reading public as a divided South Africa can offer. This is no small feat given the persistent contestations characterising how and what we remember in contemporary post-apartheid South Africa. Both her training as a journalist and an academic researcher are put to great use and value in her study, making Bloody Sunday simultaneously a credible work of rigorous scholarship and phenomenal storytelling.

Bloody Sunday is divided into four sections: Part One: Before; Part Two: The Day; Part Three: After; and Part Four: Down the Line, which provides the reader with a way to navigate this story that has been searching for a voice to tell it to the public in a well-structured and coherent manner. Although the book is focused on Irish nun Sister Aidan or Dr Elsie Quinlan, as she is also known, particularly in her role as a medical doctor at the Mater Dei Hospital and at the St Peter Claver Catholic Mission clinic in Duncan Village, it commences with the memories of one of the witnesses of the massacre and is replete with the voices of those involved, often through the formal record of the court trials that followed the murder of Aidan and Barend Vorster, an insurance salesman who was the other white person killed on the day.

As a hidden history, Bloody Sunday is also a serious attempt to register and focus on the other victims of the massacre for whom there are no records and of whom very little is known. Whereas official records indicate eight fatalities besides Aidan and Vorster, there were 214 fatalities in total, which is why it surpasses the carnage of the Sharpeville massacre of 69 people on 21 March 1960.

Bloody Sunday puts this historic event into perspective and provides additional thoughts on how best to understand and explain the reasons for this blot on the anti-apartheid struggle, which led the ANC not to rally around this mass murdering of ANC protestors and supporters, and the incident receding “from popular consciousness into scholarship and biography”.  For Bank and Carton: “Sr Aidan’s … murder produced lasting shame in ANC ranks and among many Africans in East London because this crime came to represent the most outrageous collateral damage of the Defiance Campaign, which aimed to be just and non-violent”.

Though Breier notes that “at national level, the ANC, the South African Indian Congress, the seven parliamentary Native Representatives and the Institute of Race Relations all called for an inquiry” and that the minister refused these requests because the matter was still sub judice, she also tries to explain why the ANC did not make more of the police killings. Breier also reports that the “president of the Institute of Race Relations, J.D. Rheinallt Jones, drew attention to the ‘veil of secrecy’ that had been drawn around the events ‘on the European side’”. Notwithstanding the reported silence, Breier notes that “[p]redictably, the mutilation of Sister Aidan’s body was used at the time by the National Party and the Afrikaans press to underscore their stigmatisation of black people as barbaric and promote their policies of apartheid”.

Although there has been a great deal of agreement among scholars about what happened in Duncan Village on 9 November 1952, one of the persistent controversies is the allegation of cannibalism that emerged from the incident because of reports of protesters mutilating Aidan’s burned remains by cutting and eating her flesh. Some have linked this to the African practice of using the flesh of the enemy to make muthi to fortify them against their enemies. Others have argued against the allegations that some protesters ate Aidan’s flesh raw, citing African cosmology and its disdain for such practices. Bloody Sunday reflects these views but adds another dimension to explain the eating of the flesh in this tragedy. Breier references the Catholic Church’s “most important sacrament: the Eucharist or Mass”, where through a process of transubstantiation, the bread and wine, when consecrated by a priest, are transformed into the actual body and blood of Christ”, which “anthropologist Francis Nyamnyoh refers to as the ‘cannibalism of transubstantiation’”. Breier dismisses the arguments about cannibalism because “[s]ince the 1950s, revisionist scholars have turned the Western accounts of cannibalism on their heads, querying the authenticity of the descriptions, the reliability of the data collected, and the dearth of first-hand observations, describing them as one of the ways in which Westerners dehumanise the people they wish to colonise and thereby justify their own brutalities”.

One major contribution Breier makes through Bloody Sunday is bringing to the fore the other “cannibalism” not spoken about in the massacre; “the lives of an untold number of people [that] were swallowed by the police [which led to] repeated claims over the years that many more people were killed by police in East London on Bloody Sunday than the official toll states”. This particular aspect of her study makes her book “the first to investigate the credibility of those claims, to show that the massacre could have been covered up, and unearth the names of some of the people who died”.

Through Bloody Sunday, the general public will learn that Duncan Village was the site of the largest massacre in the apartheid struggle and deserves recognition for this historic event, but also that it was the site of the 11 August 1985 massacre where reportedly about 32 people died as a result of police suppression of riots that erupted after the funeral of Victoria Mxenge, also a victim of police brutality and where, “Among the slain on that day on August 11 1985 was a six-month-old baby”.

Although there is a memorial erected in honour of the 1985 massacre, which was officially opened by then President Thabo Mbeki, there have only been memorials erected at the St Peter Claver Catholic Parish for  Aidan. The other victims of this tragedy remain unknown and forgotten.

Bloody Sunday contributes to the “stirring development that gross injustice, long hidden in plain sight, is being recognized”. It also addresses the “urgent need in East London — and elsewhere in the country — to develop a more nuanced, comprehensive interpretation of the Defiance Campaign and its precursor, the Youth League movement”,  which are key concerns for the history of East London and South Africa as a whole.

ANC Youth League leaders, Alcott Gwentshe and Joel Mabi Lengisi, who organised the gathering of 9 November 1952, are referenced in Saleem Badat’s The Forgotten People: Political Banishment under Apartheid because they were banished to far flung places across the country as a result of their involvement in the events of the day and their violations of their banning orders.

Bloody Sunday: The Nun, the Defiance Campaign and South Africa’s Secret Massacre is remarkably timely. It enables citizens to appreciate the challenges and contestations in contemporary South Africa through the lens of a historical milestone event and its disastrous consequences. Current leadership wrangling in the ANC, which distract from the larger societal discontent — as was the case in East London in 1952 — requires vigilance and attention as this book so painfully reminds us.

Bloody Sunday: The Nun, the Defiance Campaign and South Africa’s Secret Massacre by Mignonne Breier is published by Tafelberg and retails for R380.

The book as well as the paper Forgetting apartheid: history, culture and the body of a nun by Leslie Bank and Benedict Carton have been used as reference in writing this article.

Edwin T Smith
Edwin T Smith is the manager of campus operations at the University of Pretoria’s Mamelodi campus. He spent 13 years in exile in Southern Africa and in the United States where he also studied.
Facebook
Twitter
WhatsApp
Linkedin