What should be at the top of Africa’s agenda during COP-26? 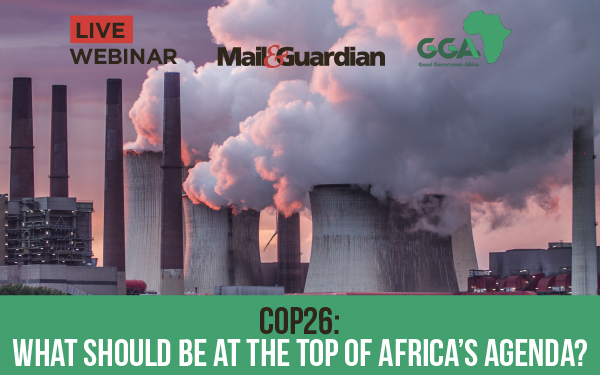 Africa contributes just 2% of global greenhouse gas emissions, yet it shoulders the greatest burden in transitioning to low-carbon economies — and it is the most vulnerable continent to climate shocks.

One of the key issues being debated as the world prepares for COP-26 is the role Africa should be playing in international efforts to mitigate against the effects of climate change, and whether its policies and resources are in line with the rest of the world’s.

“It’s obviously an enormous task, one that requires collective action from all countries. So not one country can face this alone and obviously, that is why in a multilateral setting such as the COP is a pertinent environment for such discussions,” Romy Chevallier, Senior Researcher, Governance of Africa’s Resource Programme, South African Institute for International Affairs told an online seminar hosted by the Mail & Guardian and sponsored by Good Governance Africa (GGA).

Chevallier said although the continent is made up of 55 countries it is important that Africa speaks as a bloc under the Africa group of negotiators, and aligns around certain agenda items that are key for the continent, in terms of pursuing its developmental, environmental and socioeconomic imperatives.

Climate Policy Specialist Dr Prabhat Upadhyaya of the World Wide Fund for Nature warned that it is a fallacy to attempt to deal with issues of climate change exclusively as different blocs or areas. He cited the World Economic Forum’s recent reports on a risk survey, which indicate that a lot of the investments now look at extreme weather events as the single biggest risk by likelihood for the last five years continuously.

Upadhyaya cited incidents in Canada, the US and Germany where scores of people were killed due to extreme weather-related incidents. “So, a lot of the time the argument we have heard is, ‘oh, climate change is going to impact vulnerable countries or developing countries’. But what it shows is that even developed countries are not equipped to handle the unpredictability and intensity of climate change,” he said.

He added that one of the key issues for Africa is reaching an agreement on a global goal on adaptation. “How does everybody agree how we adapt to climate change, given that recent science tells us that a certain amount of climate change is here to stay? So, we need to adapt,” he said.

Upadhayaya warned that although treaties like the Paris Agreement have been signed previously, this is not enough without implementation. He said the $100-billion set aside for dealing with climate change is not enough.

“$100-billion is on the table. But the recent needs assessment shows that that’s not even peanuts, it is essentially empty peanut shells to the needs of developing countries requiring trillions of US dollars. But anyway, we are stuck with $100-billion. So, we have to make sure that, of that amount, at least 50% is going towards adaptation,” he said.

Dr Britta Rennkamp, Senior Researcher, African Climate and Development Initiative at the University of Cape Town, offered an interesting response to a question on how key political and economic issues impact on energy transitions on the continent and how they relate to Africa’s environmental and development needs, and how they fit into the overall context of what the globe and Africa is trying to achieve at COP 26.

She raised a concern that the question of the African agenda often overlooks the need for infrastructure. Rennkamp noted that there needs to be a consideration of the continent’s circumstances when discussing energy conversations for Africa and that broader infrastructure.

“So, suddenly, that has become the reality, and that then also impacts on what we will see in the COP26, because we will basically look into these transitions in the adaptation space more than anything, and then focus on finance. What I think is if we are thinking about transitions, we need to think across adaptation and mitigation; I do not think that is a very helpful separation anymore,” she added.

Moderator, Natural Resource Economist and Policy Analyst Dr Ross Harvey, noted that one of the difficulties that tends to arise at COP is a different negotiating strength and the feeling that Africa often comes away from the negotiations not actually having achieved what it requires. He said this raises the question of collective action at the global level: how do we actually secure the trillions needed?

Chevallier said a lot of people try to grapple with how to make better progress at the COP, because nothing is really binding: “And that’s the problem. Historically, we have seen countries coming in and out of the negotiations, pulling back commitments. There are obvious major emitters that we’re still waiting for commitments from.”

She added that there is an intention from China and from the US. “But there’s a lot of countries that people are waiting to see. There are many where we say, we are still waiting for an ambitious commitment of sorts. And there are also countries, for example, that have made some form of pledge, but we can see that they are not becoming increasingly progressive, or some countries, for example, that are more progressive in terms of financing,” she said.

While the COP conferences are regarded as a significant role player in producing solutions in efforts to fight and mitigate against the effects of climate change, there’s also concern that without any action they could become just another talk shop.

Ross asked how can the possibility of the conference turning into another talk shop be avoided, and what would success for Africa look like at COP26?

“The important thing is we need to push for transparency in the process, not how the decisions are taken, what are the investment choices that are available? And so, to build or foster an environment of accountability, then I would just plug in the project that we are leaving with the wider civil society in South Africa, with its mission for economic justice,” Upadhayaya responded.

“And second, is looking at exactly that question that we don’t want to treat citizen individuals as consumers anymore. We want to look at them as citizens so that they start thinking of having a voice in overall national policy processes. I think that is an important piece of the puzzle: how do we build an accountability regime and transparency in the process, so that it is not limited to elite circles and a few people in the webinars?” asked Upadhayaya.

In terms of priorities on spending, Ross asked that should South Africa get the money, what should the money be spent on? Upadhayaya said the money should be spent on systems that build institutional diversity and transparency in the system. He said this was because the biggest challenge with South Africa is that a lot of time is spent on planning.

“We have good policies; they are very sophisticated. But when it comes to actually implementing them, on delivering them, we fail miserably. So, I think systems to ensure or enhance institutional capacity, so that we actually deliver on what we promised, for me, will be money well spent,” he said. — Lucas Ledwaba

More than funding: A roadmap to student success

Amend South Africa’s legislation to include financial rewards for whistleblowers

The Cold War ended more than three decades ago. That period of history showed that socialism, at a country scale, is unsustainable