Young & Presidential: Youth as a catalyst for change 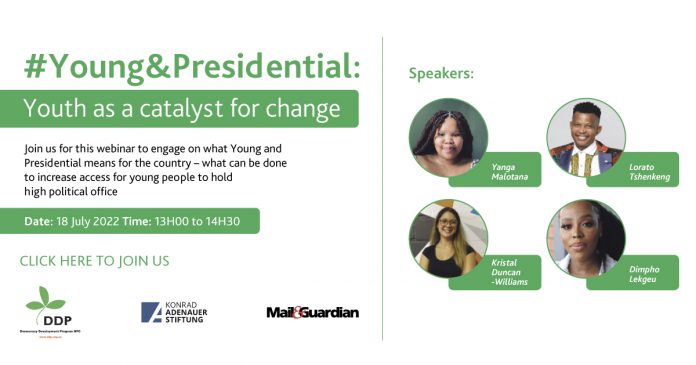 It has been just over 45 years since the 1976 Soweto uprising, an integral moment in the call for democracy in an apartheid-led South Africa. June 16 not only represents the lives sacrificed in order for us to all reap the benefits of democracy; it is also a day that requires one to be reflective of the democratic position of our country, particularly the relationship between youth and democracy.

In most developing countries there is a lack of youth participation in politics. The primary cause for this comes from the state’s incapability to construct and develop sufficient platforms that encourage meaningful involvement of citizens in political processes. This leads to the youth feeling excluded from these processes and not having the means to express their grievances, and they tend to resort to protests and youth activism. The most ill-fated consequence of this sentiment of being isolated from the affairs of the state is that the youth are often persuaded to engage in violent acts against the government as a result of their deprivation.

The youth must be empowered politically for South Africa’s social and economic development, but there seems to be an inertia when it comes to creating space for young people who want to do the work. This was agreed upon in the Young and Presidential webinar, sponsored by the Democratic Development Program (DDP) and hosted by the Mail & Guardian, held to discuss what can be done to increase access for young people to hold high political office. Other issues that arose were that educating the youth about politics and how they can participate in the civic space is essential; and that understanding who “the youth” are, and how to communicate with them effectively, is important.

The webinar was kicked off by Sphamandla Mhlongo of the Democracy Development Program, who introduced the four student speakers. Yanga Malotana, Communications Strategist for the DDP, and a Political Philosophy & Policy Analysis Assistant Lecturer at the University of Pretoria, kicked off proceedings. She said it is more important now than ever for young people to be involved in politics. “Historically, the youth are a dynamic source of innovation, who have catalysed many important changes,” she said.

Today there are many challenges for South Africa’s youth, such as poverty, lack of education and few job opportunities. More importantly, research has shown that there is massive distrust among the youth concerning political parties and the political system in general. They believe politicians are in power for their own interests, and that they are old, so they don’t represent the youth. Many politicians, on the other hand, distrust the youth because of the way they express their grievances, such as through marches and boycotts, instead of voting.

Lorato Tshenkeng, creator of #GovCommsSocial, a knowledge sharing platform for government communicators to help decode social media algorithms and understand data and trends, said that in 1994, Tito Mboweni was only 34 years old, and some deputy ministers were also in their late 20s, but “things have regressed since then”; the youngest deputy minister is now 41. Even at provincial level, you don’t see young MECs.

The issue may not be that there are insufficient young people with experience; perhaps we just don’t showcase those young people who have the requisite experience, said Tshenkeng. There are many young people who sit on advisory boards, who do phenomenal work, who are not being acknowledged. There are also incongruities between what people say and do; many do not trust qualified young people, and often young people are just “sprinkled” into organisations to “represent” the youth. Young people who are successful in the private sector must endeavour to get experience in the public sector, for some balance, and consider it as a viable career option, said Tshenken.

Dimpho Lekgeu is a community manager at Youth Lab, a policy think-tank that helps to mainstream youth participation in community building and policymaking. She said the young people working in the community must at some point scale up into civic processes, municipalities and then national politics. Youth Lab is working on making documents such as the Draft National Youth Policy 2020-2030 more accessible for the youth so that they can participate in its construction. Young people need education to participate in civic processes. It also takes resources to become active in the political sphere, to get your campaign running, as an independent candidate.

Uganda has five seats reserved in their national assembly for the youth, to ensure youth participation. If you are creating legislation to ensure youth participation, the youth must have a say in that, too. When the youth are doing things in their communities, their actions must be amplified and broadcast widely; digital platforms are a good way to do this. Training is necessary to get youth into public office, through programmes such as Futurelect, which teaches them about governance, said Lekgeu.

One comment from the audience was a suggestion that politics be included as a subject at school, so that children can learn about it from an early age.

Kristal Duncan-Williams, Project Lead for Youth Capital, an advocacy and mobilisation campaign focused on ensuring that young people in South African have the skills and opportunity to get their first job, said that young people who may want to partake in politics often have other responsibilities, such looking after younger children, trying to make a living, or finding a job. She said that we need to find ways to engage with the youth, whether it is through meetings or online, although regarding the latter, the cost of data can be a problem — and so is load-shedding.

There are many great policies for the youth in South Africa, but their implementation often falls flat; for instance, the government said it would create a million jobs for the youth, and it has only created 20 000, and nobody is held accountable. “If we understand what the barriers are for young people that prevent them from engaging in political processes, then we can start to create solutions,” said Duncan-Williams.

Tshenkeng said the political parties currently in power are making noises, but are not making any real effort to include the youth in their parties or processes; there is no real generational mix, so things need to be reimagined. Many youths are actually interested in politics, but they have not been given a space in which to raise their voices. “The current system is broken, the current players are not intentional, and they are not going to create the solution; another system is required to get the best out of this ‘youth bulge’ that we have in South Africa,” said Tshenkeng.

Lekgeu agreed, and said it is extremely difficult for a young politician to ascend to any position of leadership, provincially or nationally. The youth have to really fight for their place; there is some kind of expectation that they have to show “battle scars” before they are taken seriously. The ANC is largely composed of old cadres, and likewise, many young leaders were only recognised after they took part in the FeesMustFall protests.

Youth leagues were supposedly created for youngsters to become part of the political system, but instead they have just become platforms for factional fights. There must be more support for platforms like Futurelect and Rivonia Circle that train young people to become politicians. Politics is not something that you do on your own; older politicians who feel threatened must understand that youngsters will not “replace” them immediately, but they will work together in teams, and that the process of integrating youngsters is gradual.

Malotana said many youths don’t watch whole political speeches, but rather focus on memes that come out of them. There are also different experiences that “young people” have of politicians and political processes; we classify the youth as between the ages of 14 and 35, which are actually two different generations. Social media plays a big role in how young people engage with politics, but generally, they don’t feel that they are being heard, and they may understand political processes in different ways to older and more educated folk. Politicians often use jargon that lay people, and the youth, don’t understand.

Duncan-Williams said we must be aware of how technology changes, if we wish to stay abreast of how the youth prefer to communicate; today WhatsApp is effective, tomorrow they prefer Twitter, so we have to really listen to them to understand this. The work of civic education is to make the youth understand where they wield power, beyond merely voting.

Tshenkeng said we need a lot of reimagining regarding South Africa and youth participation in politics, which is something that Rivonia Circle encourages. It is encouraging that Boris Johnson’s replacement will be under 50 years old.

Malotana said: “If we keep things the way they are now, we are not going to see much progress.” Civic education about politics should be expanded, and the focus should be not just on the youth. To integrate young people into the political processes, perhaps we need quotas, and the elitism of current politics must disappear. Dialogues between the generations must be opened up.

Duncan-Williams said she is encouraged that there are some efforts from the government to include youth in politics. “Collaboration is key to tackle all these issues.”

China vs the US: The battle for digital supremacy in Africa