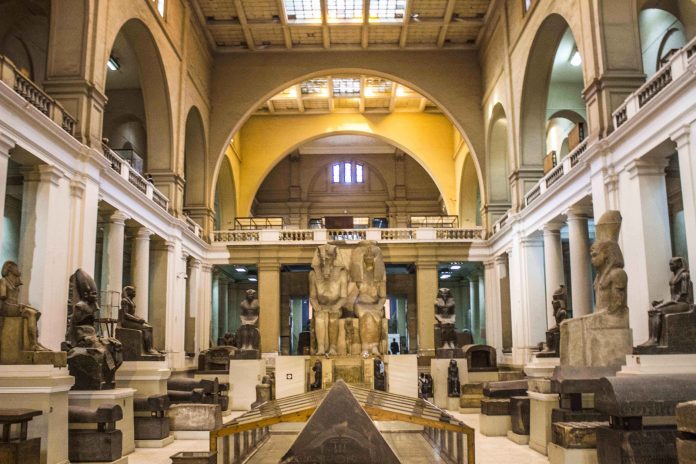 Africa’s history is a stolen one. We speak of life after the first colonists’ arrival, but rarely of anything before. The majority of our art and artefacts sit in European collections.

18 May is International Museum Day. With the reopening of exhibitions across the continent, it is more important than ever to support African museums. They connect us to centuries of forgotten knowledge, provocative art and revolutionary thought. As we have come to be taught, it is in knowing where we come from that we can figure out where we’re going.

First a gold trading post, then a slave castle, now a museum: Ghana’s Cape Coast Castle is brimming with history. Visitors can stop by the former cells and courtyards, view maps of slave trade routes, and look at exhibits that put the devastating nature of colonialism into context.

The beauty of the Cape Coast Castle, however, is that it is less a capsule and more a library. Instead of memorialising a single period in Ghana’s history, it provides insight into pre-colonial, colonial, and post-colonial life. It is a living, breathing and ever-changing avenue of insight into Ghanian culture, and worth the time of anyone who is able to visit.

From the sensual paintings of Soufiane Abari to the powerful sculptures of Dominique Zinkpe, there’s something for everyone at MACAAL.

What all the pieces at MACAAL have in common is that they are reflections of a continent with a story to tell. They are mouthpieces for Africans with unique perspectives.

Home to Lucy, the 3.3-million-year-old skeleton; Haile Selassie’s old throne; and Afewerk Tekle’s famous African Heritage piece: the National Museum of Ethiopia is a celebration of culture. Each of the four floors looks at the history of the East African nation through a different lens.

The first floor hosts the archaeological and paleontological sections which document the evolution of humanity from Lucy to today. The next explores the ancient period, mediaeval period, and various Ethiopian leaders’ periods of rule, by displaying objects from these times. On the third floor, one can find Ethiopian art presented in chronological order, beginning with the traditional and ending with the contemporary. The final floor’s ethnographic take on the Ethiopian diaspora encapsulates the very feeling of the museum. It is a space that uses individual parts to uncover the whole.

In 1994, the Rwandan genocide irreversibly changed the country and shocked the world. The Kigali Genocide Memorial is an attempt at remembering the atrocity and commemorating those who were killed during it.

Located in Kigali, the memorial is the burial ground for 250 000 of the genocide’s victims. Guests are invited to pay their respects before coming into the visitor centre. Inside the centre, you’ll find educational exhibits on general Rwandan history, the Rwandan genocide, and genocidal violence from around the world.

While it is an emotionally-taxing trip to make, a visit to the Kigali Genocide Memorial is a crucial learning experience.

Africa is a continent of many firsts. One of them being the world’s first successful heart transplant, performed in 1967 by Dr Christiaan Barnard. The Heart of Cape Town Museum can be found at the Groote Schuur Hospital in the very rooms where the transplant was completed.

The museum’s two-hour guided tour is famous for its ability to balance historical knowledge about the event with insights into the ethical debate that surrounded it. Visitors are taken on a recreated journey that begins with a car crash and ends with a miracle.

The museum provides an immersive experience like none other. It is a reminder of all that Africa has done, and all that we still can do.

6) The Museum of Egyptian Antiques, Egypt

One could argue that Ancient Egypt is the world’s greatest explained mystery. The civilisation is now well-documented enough to be understood, and yet the formation of the pyramids still baffles many of us. The Museum of Egyptian Antiques is an attempt to bridge this knowledge gap.

At what is considered to be the largest archaeological exhibit in the Middle East, you’ll find one-of-a-kind statues of pharaohs and irreplaceable artefacts that once belonged to ordinary people. Each exhibit will bring you closer to understanding the genius behind one of history’s greatest civilisations. With over 120 000 items to look at, a visit to the Museum of Egyptian Antiques is sure to leave you inspired.

7) The Museum of Black Civilization, Senegal

When Léopold Sédar Senghor came to power in 1960, he envisioned a museum that represented the contributions and successes of all Africans. In late 2018, the doors of his imagined museum were opened. It seeks to dispel misunderstandings about the African continent while uplifting its people. It is a must-visit for African history enthusiasts.

Like most collections on this list, the Museum of Black Civilization has both anthropological and historical sections that document how the continent reached this point. It is the Globalization of  Africa section that separates this museum from the rest. This section interrogates various ways of black thought while paying tribute to influential black figures across the world. Standing by the museum’s original aim, the curators have also used the Globalization of Africa section to point out the West’s history of stealing the continent’s art. It is boundary-pushing. It is vital. It ought to be at the top of any traveller’s to-visit list.

Formerly a “Native law court”, the Nyeri Museum is now a call-to-action to create a better future. During colonial times, Kenyans would settle both civil and criminal cases at the always-overcrowded courthouse. Post-colonisation, the court was turned into a museum which now hosts objects that belonged to the Mau Mau, passbooks, and other objects that attempt to paint a picture of colonial Kenya.

Through paintings, photographs, and collections the museum packs a punch that forces all who visit it to contemplate whether or not they are doing enough to better the world.

If you’re ever in Nairobi, take a trip to the Nyeri Museum and decide for yourself.

From the beginning of documented history, women have been pivotal in humanity’s progression. Their plight, however, often goes unnoticed. The Muso Kunda Museum of Women’s main goal is to “further the memory” of women. It seeks to write women back into the history books.

Established by Adame Ba Konaré, Mali’s former First Lady, the museum hosts multiple galleries that speak to the contribution of women at home and abroad. The Democracy Heroes of 1991 gallery displays a series of portraits of the women who led Mali’s March 1991 revolution. The Women in the National Building gallery displays portraits of women in Malian politics. The museum vows to make the world remember them.

Most South Africans have been to the Apartheid Museum at least once before. School, work and family trips there feel like a part of the culture. But it is very easy to miss out on all the museum has to offer during a single trip. Twenty-eight years on from the end of the apartheid, it is very easy to pretend the events that haunt the nation are far away from us now. A second, third, or fourth trip to the Apartheid Museum fixes both of these problems.

Another trip to the museum reminds us that our nation’s wounds are still healing. It shows us that because we once came together to fight for a future we believed in, we can do it again. A trip to the Apartheid Museum forces us to engage with a past that will define our future for generations to come.

Eli Osei
Eli Osei, 17, is a South African interdisciplinary creative based in Johannesburg. He is a semi-finalist of this year’s Eugene O’Neill Young Playwrights Festival, a founding member of Ukuzibuza, a columnist at The Milking Cat comedy magazine and the editor of his own film website oseicanyousee.com. This story was created through a Tomorrow’s Thought Leaders partnership between the Mail & Guardian’s ThoughtLeader.co.za website and youth platform Ukuzibuza.com to acknowledge young voices during Youth Month
Facebook
Twitter
WhatsApp
Linkedin