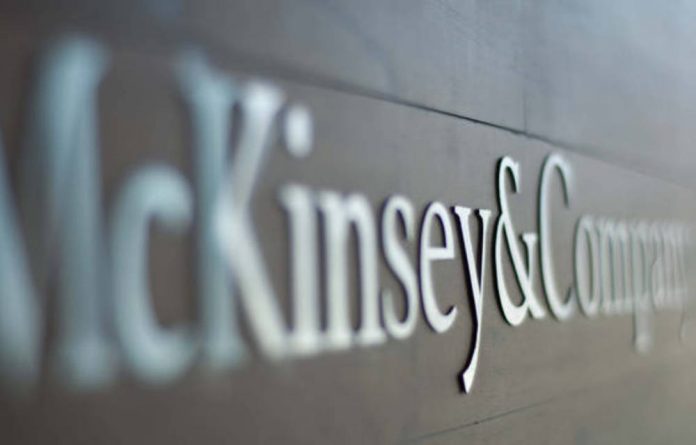 Since 2008, McKinsey & Company has regularly advised the Food and Drug Administration’s (FDA) drug-regulation division, according to agency records. The consulting giant has had its hand in a range of important FDA projects, from revamping drug-approval processes to implementing new tools for monitoring the pharmaceutical industry.

During that same decade-plus span, as emerged in 2019, McKinsey counted among its clients many of the country’s biggest drug companies — not least those responsible for making, distributing and selling the opioids that have ravaged communities across the United States, such as Purdue Pharma and Johnson & Johnson.

At times, McKinsey consultants helped those drugmaker clients fend off costly FDA oversight — even as McKinsey colleagues assigned to the FDA were working to bolster the agency’s regulation of the pharmaceutical market. In one instance, for example, McKinsey consultants helped Purdue and other opioid producers push the FDA to water down a proposed opioid-safety program. The opioid producer ultimately succeeded in weakening the program, even as overdose deaths mounted nationwide.

Yet McKinsey, which is famously secretive about its clientele, never disclosed its pharmaceutical company clients to the FDA, according to the agency. This year ProPublica submitted a Freedom of Information Act request to the FDA seeking records showing that McKinsey had disclosed possible conflicts of interest to the agency’s drug-regulation division as part of contracts spanning more than a decade and worth tens of millions of dollars. The agency responded recently that “after a diligent search of our files, we were unable to locate any records responsive to your request.”

Federal procurement rules require US government agencies to determine whether a contractor has any conflicts of interest.

If serious enough, a conflict can disqualify the contractor from working on a given project. McKinsey’s contracts with the FDA, which ProPublica obtained after filing a FOIA lawsuit, contained a standard provision obligating the firm to disclose to agency officials any possible organisational conflicts.

One passage reads: “the Contractor agrees it shall make an immediate and full disclosure, in writing, to the Contracting Officer of any potential or actual organisational conflict of interest or the existence of any facts that may cause a reasonably prudent person to question the contractor’s impartiality because of the appearance or existence of bias.”

Agency officials rely on disclosure to ensure that they have the information they need to consider whether a contractor’s other business relationships risk slanting its judgment. “Contractors have the obligation to disclose potential conflicts, and then the government has an obligation to figure out how to deal with it,” said Jessica Tillipman, an assistant dean and government procurement law expert at George Washington University Law School.

Asked for comment, McKinsey did not assert that it disclosed potential conflicts to the FDA. But a spokesperson for the firm, Neil Grace, nonetheless maintained that “across more than a decade of service to the FDA, we have been fully transparent that we serve pharmaceutical and medical device companies.

McKinsey’s work with the FDA helped improve the agency’s effectiveness through organisational, resourcing, business process, operational, digital, and technology improvements. To achieve its mission, the government regularly seeks support from additional experts who understand both the government’s mission and the industries’ practices. We take seriously our commitment to avoid conflicts and to serve the best interests of the FDA.” (McKinsey is a sponsor of ProPublica’s local virtual events programming.)

McKinsey’s failure to disclose its industry engagements deprived the FDA of the opportunity to consider whether, for example, the overlap between McKinsey’s government and pharmaceutical industry projects and the potential financial incentives at play constituted a conflict, experts said.

“For a contractor like McKinsey not to disclose the companies it is working for has all the appeal of the Addams Family on Halloween hiding Uncle Fester in the basement so as not to scare the neighborhood,” said Charles Tiefer, a professor of government contracting at the University of Baltimore Law School.

An FDA spokesperson, Shannon Hatch, said: “The FDA’s procurement activities are governed by the Federal Acquisition Regulations (FAR). The agency takes our role awarding contracts seriously and we work to ensure the agency maintains high standards of integrity as set forth in the FAR.”

McKinsey’s extensive opioid company consulting eventually began coming to light, starting with a 2019 ProPublica report. The firm’s opioid work has provoked widespread criticism, spawned a welter of lawsuits and led the firm to pay nearly $600-million this year to settle legal claims made by all 50 states, as well as five US. territories and the District of Columbia. It also prompted McKinsey to issue a statement in which the firm acknowledged that it “fell short” of its standards in advising opioid makers while also denying that it “sought to increase overdoses or misuse and worsen a public health crisis.” The firm pledged not to work on opioid-related projects going forward.

The lawsuits and public outrage have focused on the consulting firm’s efforts to help increase (or “turbocharge,” in McKinsey’s parlance) sales of Purdue Pharma’s highly addictive flagship opioid, OxyContin. But lately, concerns have begun to emerge about McKinsey’s parallel assignments, which were worth upward of $50-million over about 12 years, for the nation’s primary drug regulator.

In a letter to the FDA in August, a bipartisan group of senators led by Sen. Maggie Hassan, D-N.H., asked the regulator to address “potential conflicts of interest that may have arisen” from McKinsey’s work for both the agency and “a wide range of actors in the opioid industry, including many of the companies that played a pivotal role in fueling the opioid epidemic that our country now faces.”

McKinsey, which has focused on counselling the CEOs of leading corporations for much of its nearly 100-year history, began expanding its public-sector practice in the United States around the time of its earliest FDA projects. McKinsey prides itself on its ability to act quickly and with discretion, and in its largely unregulated engagements for corporate clients, there are few impediments to the firm doing so.

In government consulting, however, the rules are far more stringent, and on several recent occasions, the firm has been caught refusing to abide by such strictures, including disclosure rules. Over the past couple of years, for example, McKinsey’s bankruptcy-advisory practice has paid more than $30-million to the Justice Department and one client’s creditors to settle allegations that it failed to disclose potential conflicts, as required by the federal bankruptcy rules. Those allegations also prompted a federal criminal investigation of the firm. McKinsey has denied wrongdoing, and the investigation, which came to light in 2019, has not led to charges.

There are signs of overlap between McKinsey’s government and industry engagements, though publicly available information about the firm’s work for drug companies is limited. In one instance in 2008, which surfaced in a lawsuit against Purdue, the FDA told Purdue that it planned to require the company to submit a drug-safety plan for its bestselling drug, OxyContin. The company recognised that regulation of this sort threatened to cut into its sales margins, and according to McKinsey documents filed in federal court, top Purdue executives tasked the consultancy with devising a response to the FDA.

According to McKinsey PowerPoint slides, the firm proposed four options, among them suing the FDA to “delay” the imposition of a safety plan and to “band together” with other opioid producers to “formulate arguments to defend against strict treatment by the FDA.” Purdue selected the latter, with McKinsey helping to implement the strategy. In 2009, McKinsey emails and slides show, its consultants prepared Purdue executives for at least two meetings with FDA officials. (One suggested answer to questions about who at Purdue would take personal responsibility for OxyContin overdoses: “We all feel responsible.”)

In the meantime, according to a 2011 FDA contract, the agency’s drug-regulation division hired McKinsey to develop a “new operating model” for the office responsible for developing drug-safety plans of the sort Purdue and its allies were fighting against, with the consultancy’s help. Among McKinsey’s tasks were defining the office’s “strategic goals and objectives,” including its “role in monitoring drug safety.”

In 2012, the FDA issued a substantially watered-down version of the opioid-safety plan.

There’s no evidence to suggest McKinsey’s consultants at the FDA influenced the opioid-safety plan. But this apparent overlap between a government contract and an assignment for a commercial client reflects the type of issue an agency would want to consider when assessing whether a potential conflict of interest exists. Agencies are likeliest to identify a conflict “where an outside business venture is related directly to the subject matter of the procurement and structured such that there is a real economic incentive for biased performance,” Keith Szeliga, a partner at the law firm Sheppard Mullin, wrote in a 2006 article in the Public Contract Law Journal.

A number of other McKinsey projects at the FDA, contracting records show, were also likely to have a financial impact on its pharmaceutical industry clients. In 2010, for example, the FDA hired the firm to help it develop a system to track and trace the distribution of potentially harmful prescription drugs. The contract required the firm to consult with “supply chain stakeholders,” a category that potentially included a number of long-standing McKinsey clients. Hassan and her fellow senators, in their recent letter to the FDA, called this “an obvious conflict of interest.”

Another contract, from 2014, tasked McKinsey with assessing the “strengths, limitations and appropriate use” of Sentinel, a system meant to monitor the safety of drugs once they’re on the market. That project likewise called for McKinsey to interview “external stakeholders,” including “industry organisations” and “drug and device industry leaders.”

The news of McKinsey’s opioid work apparently did little to dampen the FDA’s enthusiasm for the consultancy. In March 2019, just after the news broke, the agency signed a new contract with McKinsey — extending the firm’s multiyear effort to help the FDA “modernise” the process by which it regulates new drugs.

Wait, donate, demolish: Why millions of South Africa’s vaccines will never be used