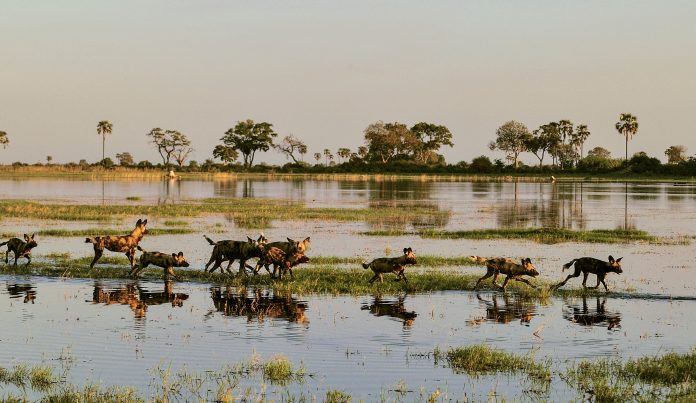 In the span of a human life, Mozambique’s majestic Gorongosa National Park has flipped from wildlife haven to killing ground and then to sacred ground of peacemaking and recovery. This past week, as African heads of state gathered in Addis Ababa to evaluate progress toward “silencing the guns” and creating an environment conducive to development, Gorongosa stands as both a warning sign and a symbol of hope.

Battles waged in Gorongosa during Mozambique’s 1977-1992 civil war left millions of people dead or wounded. It also ruined the ecosystem and killed 90% of elephants, buffalo, zebra and wildebeest as soldiers poached them for money or slaughtered them for meat. At the war’s end, just 15 buffalo and 100 hippo survived. Few lions remained.

But with peace came opportunities to rebuild the live of 100 000 people and to restore the environment. By 2018, grasslands, shrublands and forests were recovering. Some 1 000 buffalo roamed the area and the hippo population had increased five-fold. When Cyclone Idai struck last year, healthy ecosystems absorbed tens of millions of gallons of water, saving nearby villages from floods. Meanwhile, through programmes of the Gorongosa Restoration Project, families have improved their agriculture and health, and the education of their children. Today, ecotourism adds jobs as the area reclaims an essential balance between nature and human development.

As in Gorongosa, the protection of nature everywhere is central to sustainable development, to the mitigation of climate change and to secure and peaceful societies. Yet nature is being lost at a frightening rate.

Habitat conversion, the unsustainable use of natural resources, urbanisation and climate change undermine the foundations of the natural world. The earth has lost 60% of terrestrial wildlife and 90% of the big ocean fish. One million plant and animal species are threatened with extinction. We are felling rainforests at a rate of four football fields a minute.

The effect of land and ecosystem degradation on biodiversity, land productivity and human well-being in Africa has affected more than 485-million people and costs an estimated $9.3-billion annually.

That which has been destroyed in centuries, we must act to restore in the next decade to avert even greater natural, climate and human catastrophes.

There is a roadmap to action. The Campaign for Nature offers a science-driven, ambitious new deal for nature that calls on world leaders to protect at least 30% of the planet — its land and water — by 2030. The rallying cry of “30×30” fuels the campaign, which is a partnership of the Wyss Campaign for Nature, the National Geographic Society and a growing coalition of more than 100 conservation and indigenous peoples’ organisations around the world. The campaign has also launched a High Ambition Coalition (HAC) for Nature and People composed of government leaders to drive high-level action on 30×30.

The campaign calls on world leaders to help mobilise financial resources to properly manage protected areas, and to fully integrate and respect indigenous leadership and rights in the work of conservation. We know from experience that local people have to own the protected areas as their own and benefit from their protection. Only in this way will conservation succeed and promote inclusive economic and social development.

The campaign’s main measures are crucial to Africa’s peaceful development. Africa generates 62% of its gross domestic product through industries that are highly or moderately dependent on nature, most especially agriculture. One of the major risks business faces from the loss of nature is increased conflict. The protection of nature is paramount.

Africa can and should take the lead in driving action toward 30×30. A crucial opportunity to do so will be at the meeting of the 15th Conference of the Parties to the Convention on Biological Diversity in Kunming, China, later this year. There, targets will be updated to reflect the full extent of our planetary crisis.

Many African countries have already committed to conserving their natural heritage as integral to sustainable development. The governments of Rwanda and Uganda have resolved to protect 30% of their natural lands by 2030. Ethiopia has written environmental protection into its Constitution so that every political party that comes into power must act accordingly. Namibia has designated its entire coastline as a national park.

Gorongosa National Park has shown us that nature recovers if given a chance. And, like streams across a watershed, the benefits flow from there.

By investing in national parks, natural reserves, sustainable tourism and community-led conservation areas, and by partnering with the local population, by building a global consensus for 30×30, we can not only save biodiversity but also generate jobs and income, significantly mitigate climate change — and silence the guns.