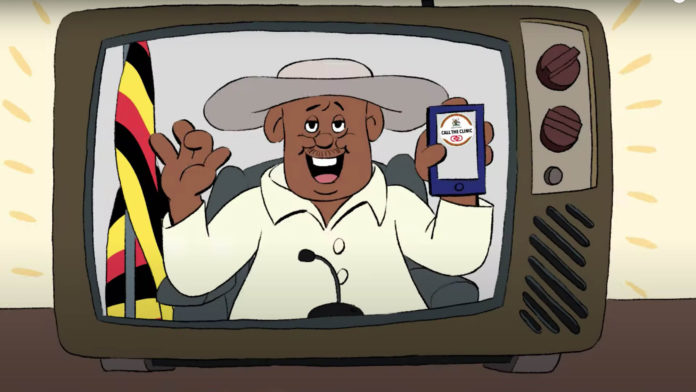 After a five-year unexplained hiatus, one of Uganda’s most famous cartoon characters is back on TV. Katoto hasn’t changed at all. His frayed yellow hat still sits atop his shaven head, a distinctive beard giving way to a toothy smile. His fashion sense is still awful and his agility is remarkable given the size of his potbelly.

Katoto first hit Ugandan screens in 2015, becoming an instant sensation. The locally-produced cartoon is based on the mythical adventures of a folktale character called Ishe-Katabazi, who, in the vibrant Banyankole oral tradition, exposes the lies and absurdities of society.

In the old stories, Ishe-Katabazi was never partisan, but the bumbling Katoto is an enthusiastic supporter of President Yoweri Museveni. The president makes frequent cameo appearances in the show, usually in some heroic guise or another. Once, when Katoto tried to join the army, commander-in-chief Museveni rescued him from a rushing river; another time, roadbuilder-in-chief Museveni inaugurated a highway in Katoto’s village.

Katoto, enamoured with the new road — “straight like a carpet” — dances with glee, and shouts: “Let’s pick the man again. Again, again, again.”

Sure enough, in February 2016, Museveni won his fifth term in office. Katoto, no doubt, was thrilled, but by then — job done — the character was retired from Ugandan screens albeit for a brief cameo last year.

In a short cartoon released by the ministry of health last month, Katoto catapults into the scene, hastily pushing his sick son with suspected coronavirus symptoms in a wheelbarrow to a faraway clinic. He crashes into a tree and spies a group of men watching TV. Lo and behold, Museveni, complete with iconic hat, is on the screen. Distracted by the man in the hat, Katoto abandons his son by the side of the road and carelessly joins the throng of spectators. The president is announcing a new coronavirus symptom checker app. Katoto beams, excitedly exclaiming, “You have come to help. You have solved it.”

Katoto downloads a coronavirus app recommended by the president, and uses his phone to check in with a white doctor. The doctor assures him all is well.

The boy gets a hefty slap from Katoto.
“You boy, why didn’t you tell me it was just hunger.”

The clip raises several questions. Why is the doctor white? Why, after 34 years of Museveni’s rule, is it still realistic to see a boy transported to hospital in a wheelbarrow instead of an ambulance? Why is the boy hungry, and why are we using his hunger as a punchline?

But an even more important question is: Why is Katoto back? Why now?

Katoto’s return in the midst of a pandemic is a curious one, and once again cannot be disassociated from the political context in which he appears.

Bobi Wine appeals to a constituency that Museveni struggles to attract — the youth.

Museveni has tried many times to appeal to the youth. He calls them “Bazukulu” (grandchildren), invoking the respect and obedience that is due to an elder. He has tried to rebrand himself as “M7 Man of the Ghetto”, in a futile effort to steal the thunder of “the Ghetto President” — Bobi Wine. He has even dished out cash to youth groups in poorer areas, but all to no avail. Instead, the president has been nicknamed Katala, a Luganda slang for someone unsophisticated and out-of-touch.

In 2015, Katoto helped Museveni’s message reach younger audiences. It is no coincidence that with elections once again on the horizon, Katoto has made his grand return. But this time the character may be even more influential, because political rallies and face-to-face campaigning have been banned as a result of the coronavirus pandemic. All campaigning, therefore, must be virtual ahead of the 2021 elections scheduled for between January 8 and February 10 next year.

Uganda has announced a plan to install two solar-powered television sets in every village in the country to help schoolchildren with virtual learning. That’s nearly 140 000 screens that will broadcast news from the state-owned Uganda Broadcasting Corporation, which has channels in many local languages. It has been found to favour the ruling party in previous elections — and may perhaps screen a seemingly-innocuous cartoon about a clumsy, loveable, pot-bellied villager with a fierce admiration for his president.