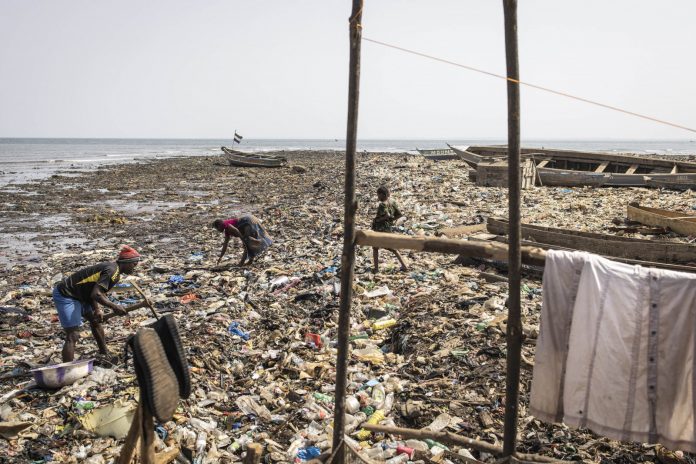 This has put President Julius Maada Bio under immense public pressure to come up with a solution. The World Bank has told the government its best option is to expand agricultural productivity. Instead, the government chose a different path with its own economic policy.

“My fellow citizens, this is your money, the legal tender meant to be used by all Sierra Leoneans. Let us demonstrate a distinguished and heightened sense of responsibility in handling this new currency,” Bio said at the launch.

The new notes are intended to curb inflation — running at 24.87% year on year as of May — and make the currency easier for citizens to handle. Previously, shoppers sometimes had to take bags of banknotes to pay for groceries.

Not everyone is convinced the new notes will make a meaningful difference. Just days after the launch, the capital Freetown woke up to a stay-home strike by commercial taxi drivers and a protest by women’s groups saying enough is enough.

The whole city, and other parts of the country, were brought to a standstill, with shops closed and commuters stranded. Protesters described the economic situation as unbearable and demanded that the government take action.

Police responded by summoning opposition leader Femi Claudius Cole for questioning, accusing her of inciting the protests. She was released after days in detention.

Santos Koroma, a taxi driver in Freetown, joined the strike.

“Fuel prices are so high we struggle to survive. I have not seen anything like this in 10 years of  driving,” he said.

“We spend so much money buying fuel that we return home to our families empty-handed,” Koroma laments. “I have a wife and two children. Now I really struggle to provide for my family because of this fuel situation.”

The skyrocketing price of food, fuel and other consumer items is not a uniquely Sierra Leonean problem — nor is the angry response.

The cost of living crisis is being driven by sluggish post-pandemic economic growth and compounded by Russia’s invasion of Ukraine, which has directly affected the price of grain and oil.

But that does not mean Sierra Leone’s government should be given a free pass, argue civil society groups. Alphonsus Gbani, head of the Human Rights Defenders Network of Sierra Leone, says reckless and unreasonable government expenditure has exacerbated the economic shock — and it needs to find a solution beyond a redesigned currency.

“While the government is crying foul of international price control, and that they don’t have what they will export to generate foreign currency, we believe the government, equally, has a responsibility to respond to the needs of  the citizens even though things may be challenging,” Gbani says.

One of these responses should be tax breaks for the poor, he argues.

For his part, President Bio has accused private sector players of extorting money from poor people by creating artificial scarcities but has also acknowledged that “these are difficult times”.

Mariama Bangura knows just how difficult these times are. She displays her wares on a makeshift stall on a busy road overlooking the Lumley roundabout in Freetown. She sells apples, carrots, cabbages, onions and other fresh produce. Not long ago, Bangura could make enough profit to feed her family of 10 but now she barely makes enough to survive.

“I cannot even raise enough money to pay for my child’s graduation,” she says.

And when there is no money coming in, it doesn’t really matter whether the banknotes people use are old or new.