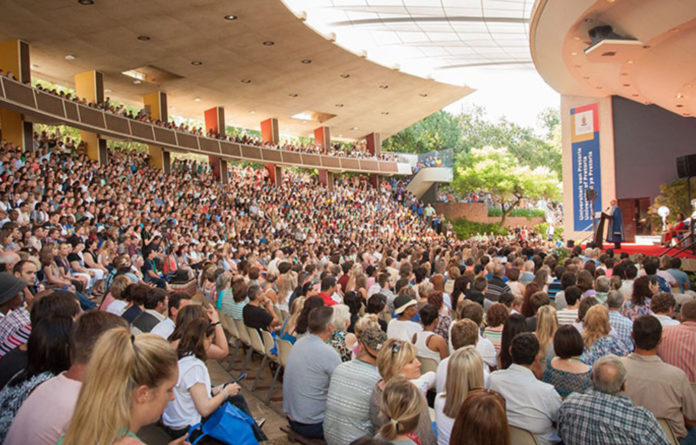 On 9 August, Kenyan voters will cast their ballots in what many are calling a two-horse race between the 77-year-old Raila Odinga and the 55-year-old William Samoei Ruto, the current deputy president.

According to the  commission chairperson Wafula Chebukati, the general elections will probably see a reduced participation of young people.

Kenya is predominantly young, with youths making up about 80% of the population of 56 million. But many young people seem disinterested in the political and electoral process. Some say this has to do with insufficient information but not everyone agrees.

“We cannot say it is a lack of civic education but a lack of solid interest in things that matter,” Edwin Kegoli, a Kenyan political analyst, said.

Many young people, who also form the bulk of the unemployed, grumble about being marginalised in terms of opportunities.

At least 1 million young Kenyans enter the labour market each year but most struggle to get jobs, according to the Kenya Private Sector Alliance.

Wilkister Aduma, a youth leader who runs an NGO that supports young people seeking elective seats, said the “political space” had encouraged a climate of “apathy”.

Others say young people have lost faith in the entire electoral process because of a lack of trust in politicians.

“It’s very toxic and so acidic,” said Peter Mwyne, campus director at Daystar University in Nairobi. “It’s toxic because it is not based on mutual ground. It’s a symbiotic relationship where you give me this, I give you that. It’s a quid pro quo.”

He said politicians were perceived to engage with youths only when it was convenient for them.

The picture is very different in Nigeria. Africa’s most populous nation is due to go to the polls to pick its next leader on 25 February.

Unlike Kenyans, Nigerian youths seem eager to cast their ballots and to make a change.

“Nigeria is in a mess, everything is upside down, the economy is getting worse by the day,” said Peace Joseph, a student in Lagos.

“Most people can’t afford three square meals a day. So, I am going to come out on that fateful day and vote,” she vowed. She said others should not be “ignorant” by saying “our votes do not count”.

“If they [youths] are tired of the way the country is, if they are tired of the high rate of insecurity, banditry, terrorism, naira devaluation, and all the other factors affecting us, they should come out and vote,” he insisted.

Political observers say the eagerness to vote might have to do with the 2020 #EndSARS protests triggered by a video of a man purportedly being killed by the notorious Special Anti-Robbery Squad (Sars).

Inspiring youths to get active in politics

Young Nigerians mobilised tens of thousands of fellow youths and protested against police violence in the streets under the hashtag #EndSARS.

The demonstrations shook the nation for two weeks and forced the government to disband Sars and establish judicial panels of inquiry to look into numerous claims of police abuse.

According to Amnesty International, at least 12 people were killed when the army reportedly opened fire on demonstrators.

Since then, Nigerian youths have been engaging more actively in the country’s political discourse, said Sam Olukoya, a correspondent in Lagos .

Political analyst Edwin Kegoli said it was crucial for young people to develop an interest in the national discourse.

“If we get more young people into employment and empower them so that they are participating in programmes that will bring growth and development from an economic perspective, then we’ll find most of them beginning to develop that interest,” he said.

He called on all political stakeholders to bring serious discourse to young people and tell them that the future belongs to them.

“If you fail to make a decision right now, maybe you are disinterested. You are only trading in your future,” Kegoli said.

Deutsche Welle
Deutsche Welle is Germany’s international broadcaster. They convey a comprehensive image of Germany, report events and developments, incorporate German and other perspectives in a journalistically independent manner. By doing so they promote understanding between cultures and peoples as well as access to the German language.
Facebook
Twitter
WhatsApp
Linkedin