From one warrior to another … 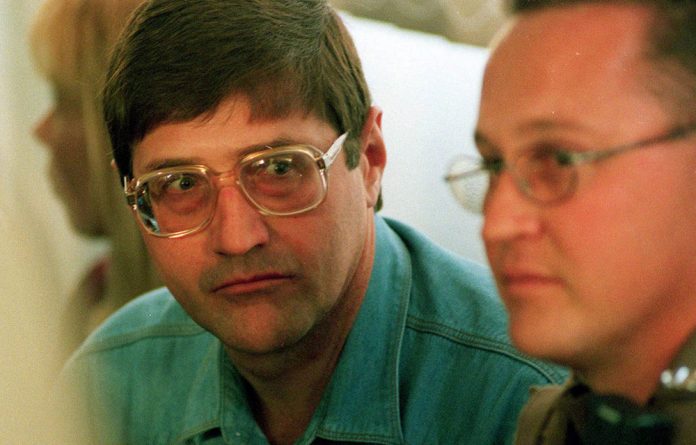 Former Vlakplaas commander Eugene de Kock believes that he was the victim of an attempt by the former apartheid leaders, notably former president FW de Klerk, to boost their image during the 1990s negotiations with the ANC, and that President Jacob Zuma will grant him amnesty because Zuma “understands the essence of the armed struggle”.

De Kock, who is serving two life sentences and 212 years’ imprisonment in Pretoria’s C-Max prison for apartheid atrocities, applied for presidential pardon under former president Thabo Mbeki, but has yet to receive an answer.

He believes that Zuma will look upon his application more favourably than Mbeki did because of Zuma’s involvement in Umkhonto weSizwe.

The presidency could give no time frame for when De Kock’s application for pardon would be considered or the outcome announced. It has been suggested that Zuma may pardon De Kock as a symbolic trade-off for pardoning his former financial adviser, Schabir Shaik.

According to Van der Merwe, De Kock does not have additional information about apartheid-era crimes that he could offer Zuma as a reward for pardon, as has been reported.

“After his sentencing he gave his full co-operation to the National Prosecuting Authority. He presented to the NPA all the information he had which could implicate his former colleagues. After almost 16 years in prison the NPA sucked him dry and they have no use for him now,” said Van der Merwe.

The charges relate to the period during which he was commander of the notorious police unit based at Vlakplaas outside Pretoria. He was found guilty of killing five men who were ambushed by the police outside Nelspruit in 1992 and for conspiracy to murder alleged double agent Brian Ngqulunga.

In the document he sent the Mail & Guardian Van der Merwe writes that De Kock was a political pawn of De Klerk and other leaders, who wanted to show they were serious about the negotiations process by prosecuting one of their chief lieutenants.

He says De Kock asked the Goldstone Commission to halt the investigation into his involvement in the Ngqulunga ambush in the hope that he could receive amnesty later, but he was tried and sentenced before the amnesty hearings started.

“If Eugene de Kock’s trial was halted until the conclusion of the negotiations around amnesty, his trial about the Nelspruit incident would have proceeded differently. He would not have been branded as a mass murderer and the court would have, without doubt, given him a lighter sentence if it had all the background presented at the amnesty hearings,” writes Van der Merwe.

De Kock received amnesty from the truth commission for most of the other atrocities to which he pleaded guilty. Van der Merwe says the “Nelspruit trial”, concluded in 1996, remained the only obstacle.

His statement makes it clear that De Kock is relying heavily on Zuma’s MK career, during which he served as head of intelligence, in his plea for a pardon.

“President Zuma was an active member of MK, which was directly involved in the armed struggle and therefore understood the essence of the struggle,” he says. “This is in contrast to De Klerk and [former president] Thabo Mbeki, who had little direct experience.”

Van der Merwe argues that both De Klerk and Mbeki sanctioned the release of political prisoners convicted of the same crimes as De Kock, “but neither of them lifted a finger to help De Kock”.

“President Zuma has, after 1994, intensively worked on reconciliation. His involvement in the armed struggle made him aware of the desperate conditions which were at play and in many instances the desperate measures undertaken by the various parties. The foot soldiers, like Eugene de Kock, were merely pawns that had to promote the interests of their parties.”

Van der Merwe says he believes that Zuma has sympathy for the way De Kock was betrayed by his political leaders.