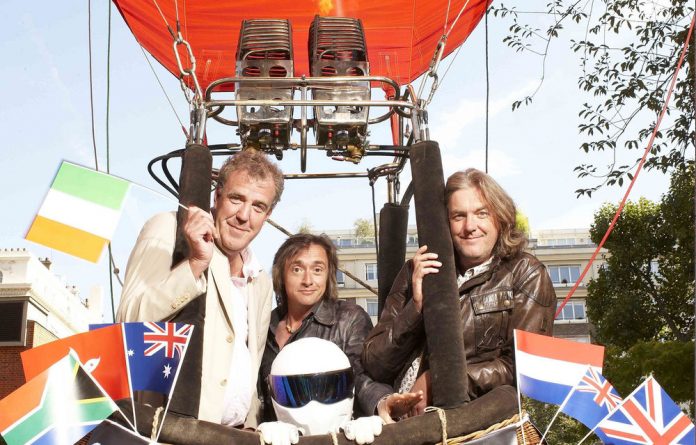 Famed for their legendary globe-trotting antics, the three presenters took inspiration from some of the world’s most famous explorers including Dr David Livingstone, Sir Ernest Shackleton, Robert Falcon Scott (Scott of the Antarctic) and Sir Edmund Hillary.

In preparation for this year’s tour, which will play to over 340 000 Top Gear fans, the Top Gear Live crew have been hard at it, knocking about new ideas, welding things together they don’t understand and nodding to each other a lot.

The result? A completely new show featuring the world’s fastest cars pushed to their mechanical limits, acrobats laying their lives on the line and some middle aged men falling overŠ. and catching fire a bit.

Fans can expect an edge-of­-their-seats experience with flaming rally cars, extreme underground street racers and cars which change colour in the blink of an eye. Other sequences will feature the infamous Stig who will be leading our troop of international stunt drivers via a mix of hand gestures, sonic pulses and Morse code, showing audiences the ultimate in precision driving.

Rowland French, Top Gear Live’s executive producer, says “I for one am hugely excited about this coming Top Gear Live tour. We had a fantastic response last year, but to ensure we keep the audience on the edge of their seats once again, I’ve developed some truly groundbreaking machinery for the 09/10 tour. Our team of world class engineers and some of the UK¹s foremost special effects designers have combined to create incredible cars that are about as far from road legal as you could possibly imagine!”

The live nature of the shows will give fans the unique opportunity to interact with some Top Gear favourites. The Cool Wall will feature so that fans can have their voices heard (and then possibly ignored) and audiences will be pitted head to head for the Top Gear lap. The presenters will receive a number of challenges during the show and this tour’s burning question is: “Can our intrepid presenters really solve the serious issue of traffic cone deployment?”

The size of the tour makes for some interesting statistics. This year, it will play to over 340 000 fans on four continents. And 135 trucks, three ships, one freight plane, 94 cars and 150 sets of tyres will be required to keep this high-octane show on the road. The audience will witness fireballs and have their senses assaulted by decibel levels that reach 104db.

To win tickets to the show, click here to email your name, city and cellphone number to the Mail & Guardian. .