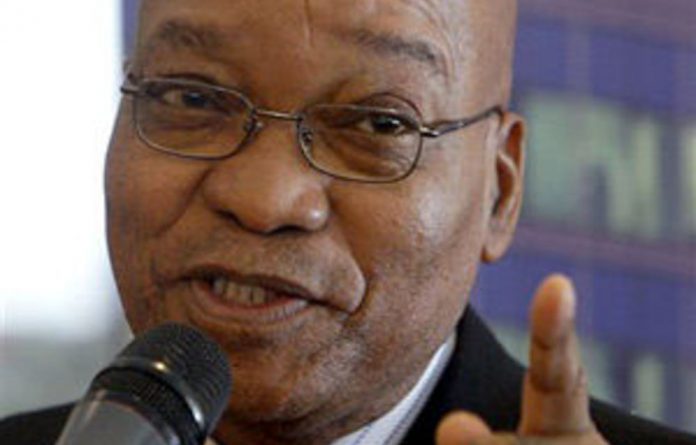 The public fury that greeted the news that Zuma has fathered another child out of wedlock indicates that the tide of what once seemed unstoppable support for the president may have reached its limit.

Even some of his more vocal supporters did not, as is the norm, leap to his side. The ANC Youth League insisted it would not comment on Zuma’s situation, although some of its leaders are known to have opined privately that his behaviour was simply indefensible.

Its president, Julius Malema, told the Mail & Guardian that the league ‘took a conscious decision to turn a blind eye on that subject [Zuma’s behaviour], but that he did not believe the president’s actions had compromised the league’s safe-sex campaign, which would continue unabated, with leaders urging all young South Africans always to carry condoms without shame.

‘The only people who can compromise our campaign are ANCYL leaders. Young people look up to our leaders. So far I think the ANC collective has done a great job. We should not isolate Zuma.”

The Congress of South African Trade Unions said it would not pass judgement. Yet their statement that the only way to defeat the HIV/Aids pandemic is to abstain from sexual activity for as long as possible, be faithful to partners and ‘condomise” carried a whiff of disapproval.

The SACP maintained a stony silence. Zuma himself waited three days before issuing a statement in which he confirmed paternity but also took exception to the media frenzy. He then promptly announced that he was taking two day’s leave to recover from ‘an exhausting schedule”.

‘Zuma’s taking two days off his hectic schedule,” tweeted one wag. ‘Mothers, lock up your daughters!”

‘Bedroom antics’
Around the country, public reactions were equally blunt.

From the back seat of a rickety Rosebank minibus taxi, a middle-aged woman blasted Zuma’s ‘questionable conduct and bedroom antics”.

Introducing herself simply as ‘Mme Mary”, she made the most of her captive audience and launched into a fiery speech that pretty much summed up what millions of South Africans were thinking.

‘Zuma’s behaviour has nothing to do with culture. He is corrupting both young men and women of this country. The message he is passing to young people is that it is good to have children outside wedlock and that it is against our culture to use a condom … sies!”

In the wake of newspaper headlines announcing yet another addition to Zuma’s bevy of trophy women and his 20th acknowledged child, South Africans seem to have had enough of the 67-year-old Zuma’s sex life and are not only questioning his morals, but also his fitness to hold the highest office.

‘He is married, engaged and has a child out of wedlock, said Phindile Tshabalala (32). ‘How are we going to respect him now?”

That the nation is undergoing a loss of faith in Zuma’s office because of his promiscuous behaviour became more apparent through the week as people made their feelings plain.

At downtown taxi ranks, on crowded Soweto street corners and behind the lush garden walls of Diepkloof Extension, guns came out blazing against the president.

But it was shot through with reproach and anxiety. ‘Zuma is naughty,” one young domestic who did not want to give her name confided. ‘I think he is a good man but his love for women is just too disturbing. I think he needs sex therapy.” Another domestic from the street was blunter: ‘I resent him. He is a bad example … I have no respect for him.”

One elderly neighbour said that Zuma’s behaviour was distracting him from getting on with the real job at hand. ‘I mean here we are, complaining every day about everything, while our president is busy frolicking with young women. What is wrong with this man?”

Thousands of online comments responding to the news underlined the woman’s point. As one M&G online reader, Nosisi Feza-Piyose, put it: ‘We still call him our president after this confession? JZ actions are not [those] of a leader and we are not supposed to continue to entertain him. Tools down South Africans. He must step down now!!! This is urgent.”

Back in the rickety Rosebank taxi, Mme Mary was in full flight and had now turned her attention to warning young women: ‘You are a disgrace … you are filthy and greedy. The only reason you go around sleeping with these useless old men is because you want their money …”