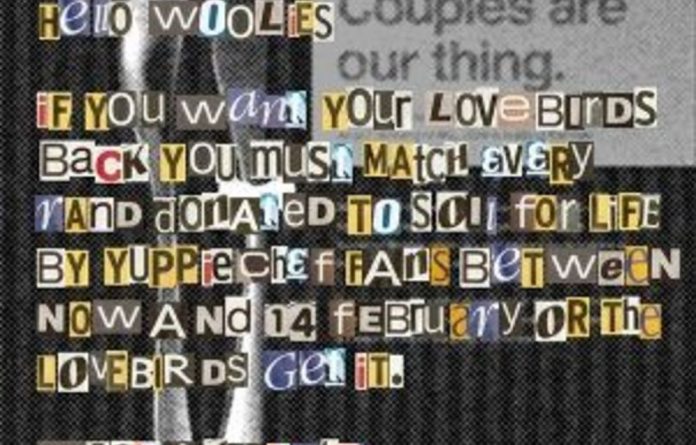 It started with a typo and turned into a light-hearted David and Goliath story that the blogosphere can’t get enough of.

When megastore Woolworths launched Lovebirds, their Valentine’s Day campaign, nobody noticed the missing “s” in the URL for the online competition. All the marketing material pointed to www.woolieslovebird.co.za, but the company had actually registered the plural version, www.woolieslovebirds.co.za.

Paul Galatis, a partner at online kitchen gadget store Yuppiechef, said the company first noticed the error when it tried to go the competition website itself. “We typed in the address and it wouldn’t go anywhere,” he told the Mail & Guardian on Friday. After Googling for the competition, the partners at Yuppiechef realised that “a designer had managed to leave an ‘s’ off all the marketing material”.

By the next morning, the the Yuppiechef had become noble cyber-squatters. They registered the domain for themselves and cooked up a scheme to help raise funds for Soil for Life, a non-profit organisation (NPO) that helps people in disadvantaged communities to grow home food gardens.

They put a cheeky ransom note up on their blog warning Woolworths, “If you want your lovebirds back, you must match every rand donated to Soil for Life.” Similar messages on Facebook and Twitter asked followers to “Donate now & make Woolies pay or the lovebirds get it.” Then they reached out to their mailing list of 10 000 customers with a newsflash about the campaign. “And then we held our breath in anticipation,” said Galatis.

Underdog wins
By the end of week the internet was abuzz with news of the ransom situation. The story was irresistible to onlookers because it was so ridiculously funny — a small online store challenges a mega-corporation for charity’s sake, and “wins”.

Yes, Woolworths embraced the marketing fluff and not only agreed to match any donations up to R7 500, but also told the guys at Yuppiechef it was happy to let them keep the URL as long as there was a link to the real competition on the page.

Yuppiechef challenged any company to match donations and soon Philips South Africa had agreed to match another R10 000. To date it has raised almost R50 000 for Soil for Life.

The money should go a long way for the NPO, which aims to help start 450 home gardens in impoverished areas this year. Soil for Life director Pat Featherstone said the money would be used to build an outdoor classroom, so teaching could go on even during the rainy winter months.

Though Galatis credits social media with the speed at which things took off, he maintains that it was the “mix of elements in the story that seemed to appeal to everyone”.

No harm
Galatis said he doesn’t think the stunt has harmed Woolies’ Valentine’s Day competition. “Most people don’t read signs in stores, go home, remember the URL and type it in. They just Google it, so it’s not like we’ve captured thousands of Woolies customers,” he said.

Meanwhile, Cherryflava marketing commentator Jonathan Cherry said he believed the missing “s” in Woolworths posters had been “an honest mistake”, something that “happens all the time” in marketing. Cherry said that usually when an error like this is made, the marketers correct it as soon as possible. The problem here was that Yuppie Chefs had gotten to the domain before the marketers could. “The basic error was that they didn’t register all the variations of [the domain]. It’s important that you do that, just to cover all your bases,” he said.

But he credited Woolworths for the spirit in which it responded. “Woolworths has done well to play along with it and not to go the heavy-handed route. It’s earned them a lot of respect from the web community. And I think Woolworths has got more PR coverage out of this than it ever expected. It can only be beneficial to it,” he said.

Woolies’s convivial response is a far cry from an incident last year in which Brandhouse threatened legal action against the designers of a viral ad campaign that spoofed Windhoek Lager’s series of Lou Gossett Jnr ads, earning the criticism of local netizens.