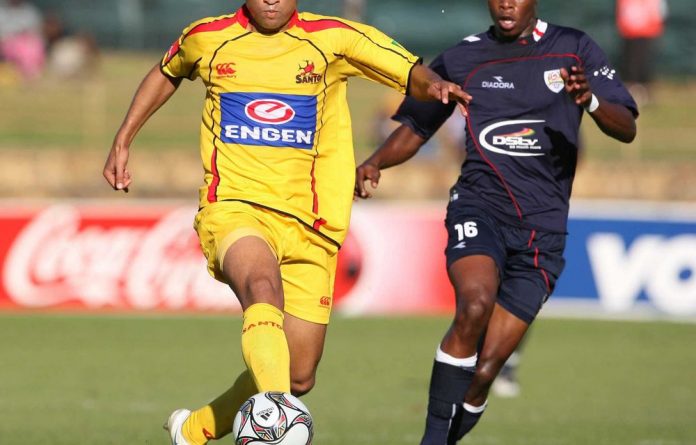 Santos could throw the Absa Premiership race wide open during the next six days when they play leaders SuperSport United at the Athlone Stadium on Tuesday night and then second-placed Mamelodi Sundowns at the Super Stadium on Sunday.

The People’s Team, who are still outsiders for the title, have not given up hope despite losing 1-0 away to Platinum Stars at the weekend.

Santos are 11 points adrift of United with five matches to play and United have four games remaining.

The People’s Team trail Downs by eight points after the Brazilians scored a 1-0 away win over Ajax Cape Town on Sunday, which adds to the pressure on the defending champions who have a three point lead at the top of the table with Downs and Santos having that match against each other in hand.

Said Santos coach Boebie Solomons: “We are not even thinking about the championship. We are determined to beat both United and Sundowns and then anything can happen.

“We have our destiny in our own hands, but we have to collect six points from the next two matches.”

Solomons said he was more worried about the match officials who will handle the games than the opposition.

“We have had a really good penalty claim disallowed against Stars, which was not an isolated incident.

“My biggest fear is who will referee our next games because there is little consistency and we have not been getting the rub of the green.

“All I ask for is a fair crack of the whip from the match officials and we will do the rest on the pitch.”

Santos have a good record against SuperSport who are aiming for their third successive championship triumph. They took four points off the champions last season and drew 2-2 with them at the Super Stadium in the first round.

He will be looking to the likes of Phikolethu Spelman, Erin Isaacs and Eleazar Rodgers, to open up the tight United defence that has not conceded a goal in their last two matches.

“We played well against Stars and should have won 10-1, but missed far too many chances. We need to stick those chances away against SuperSport and keep the title race alive.”

United defeated Free States Stars 2-0 at the Super Stadium last Saturday to increase the pressure at the top of the table.

Hunt rested striker Glen Salmons and his deputy, Dario Monteiro, scored the opening goal against Stars. But Liberian striker Anthony Laffor once again fired blanks and could make way for Salmon in the attack.

Once again Daine Klate, the United flying winger, underlined his potential with the second goal against Stars and his speed and knack of netting vital goals could be the biggest threat to Santos’ dwindling title hopes.

Tuesday’s other match is academic as regards the title chase. Golden Arrows face Kaizer Chiefs at Durban’s Moses Mabhida Stadium.
Amakhosi have drawn their last two matches and are eight points behind United and do not look to have the fire power to challenge for the title.

Arrows are fighting to qualify for the top eight and defend their MTN8 title at the start of next season which means they are going to test Amakhosi to the limit. — Sapa

It was the Siphiwe Tshabalala show as Kaizer Chiefs moved into second spot on the Absa Premiership table when they defeated Maritzburg United 3-1.
Read more
Sport

Bloemfontein Celtic are determined to stop Kaizer Chiefs in their tracks when the sides meet at the Seisa Ramabodu Stadium on Wednesday night.
Read more
Sport

Orlando Pirates coach Ruud Krol said he was lucky and is not getting carried away after his charges staged one of the great escapes of the season.
Read more
Sport

Title-chasing Orlando Pirates will be guarding their unbeaten home record when they take on Wits at the Orlando Stadium on Saturday night.
Read more
National

Safa has accused the SABC of "showing no respect for the Bafana Bafana brand" by giving preference to coverage of cricket.
Read more
Sport

Orlando Pirates head coach Ruud Krol has set his side a target this season of qualifying for the African Champions League in 2012.
Read more
Advertising