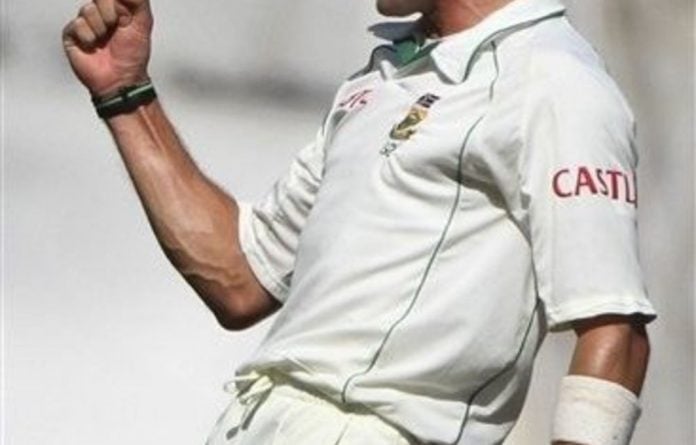 South Africa thumped India by innings and six runs despite a fighting century by Sachin Tendulkar on the fourth day of the first Test on Tuesday to go 1-0 up in the two-match series.

Fast bowler Dale Steyn and left-arm spinner Paul Harris shared six wickets to bowl out India for 319 in their follow-on at the Vidarbha Cricket Association stadium in Nagpur.

Harris picked the key wickets of Tendulkar (100) and Mahendra Singh Dhoni, who suffered his first Test defeat as captain since taking charge in 2008.

It was India’s third defeat by an innings margin at home, all of those coming against South Africa.

The South Africans now need to just draw the second and final Test beginning in Kolkata on February 14 to reclaim their top ranking from India.

The emphatic win was set up by Hashim Amla (253) and Jacques Kallis (173) who helped South Africa post an imposing 558-6 declared before Steyn picked a career-best 7-51 to bowl out India for 233 in their first knock.

Steyn finished with a match haul of 10 wickets for 108 runs.

Lone resistance
India’s lone resistance in the second innings came from Tendulkar, who smashed 13 fours in his 179-ball knock on the way to his 46th Test century.

Tendulkar, who hit two successive centuries during India’s 2-0 away Test win against Bangladesh, defied the South African attack for close to four-and-a-half-hours before being dismissed in a bizarre fashion.

Tendulkar tried to sweep Harris but the ball bounced off his body, hit the elbow and fell on to the stumps. He watched the ball in disbelief before trudging back to the pavilion.

The batting ace shared 72 runs for the third wicket with Murali Vijay (32) and another 70 runs with Dhoni, who was caught at silly point after staying for 144 minutes at the wicket.

Resuming at 66-2 after being made to follow on, the hosts lost overnight batsman Vijay inside the first hour of play.

Debutant Subramaniam Badrinath (six) edged Parnell to Mark Boucher, who returned to keep wickets after missing the final session on Monday with a back strain.

After the dismissal of Dhoni for 25 in the post-lunch session, Harbhajan Singh hit a run-a-ball 39 with six fours and a six to provide some cheer to Indian fans before curtains were drawn on the innings. — AFP