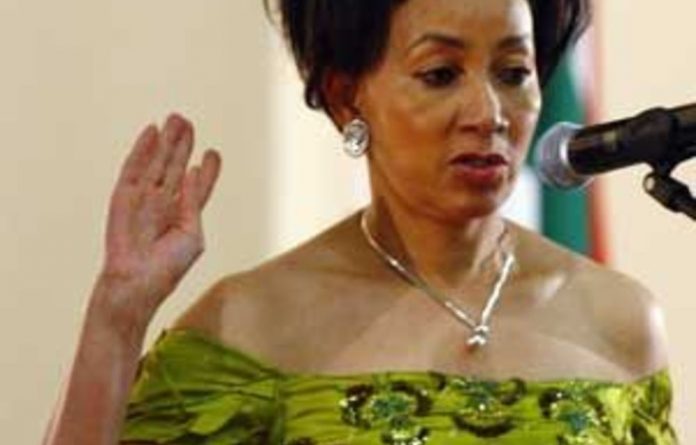 The president “is comfortable making a choice” at this point after first having had to fill other key seats in the security cluster, notably that of national police commissioner, Sisulu said.

“A decision will be announced in due course,” she said.

Sisulu said acting defence secretary Tsepe Motumi was unable to withstand grilling by Parliament’s watchdog public accounts committee, Scopa, because he lacked eloquence and not a secure grasp of policy.

“He might not have the eloquent qualities that members have. He quite clearly crumbled,” Sisulu said of the Scopa hearing that prompted calls for Motumi’s resignation.

“In a proper space, in a proper mindset, he would have been able to respond to the questions.”

She added: “I would recommend him for any job. He has a lot of experience in defence policy,” pointing out that Motumi had been instrumental in putting in place corrective measures on financial management.

Better financial management
Sisulu vowed that while she serves as minister, the department would not see another qualified financial audit, as it has for the past nine years.

She worked through the six qualified notes in the Auditor General’s report on the department in the last financial year, which found that among other problems its asset register was in disarray.

Sisulu said all issues were being addressed and she hoped to secure the transfer of “an existing chief financial officer in government” to defence next month.

In a sideswipe at the Congress of the People, Sisulu blamed problems in the defence ministry on former minister Terror Lekota and his deputy Mluleki George, who defected from the African National Congress (ANC) to form the new party months before the April elections.

“They were actively involved in attending to the rupture in the ruling party. They both left unceremoniously one morning.”

Just before the split in the ANC, in August, defence secretary January Masilela died in a car accident.

Sisulu said it dealt the department a “vital blow” and that Motumi had then been given the difficult task of keeping things together. — Sapa

Umgeni Water’s board in KwaZulu-Natal was appointed irregularly by her predecessor, the water and sanitation minister claims
Read more
Environment

Amid the headwinds created by the Covid-19 pandemic, it’s time the Aloe ferox, which survives in dry, harsh conditions, is nurtured — but the options are limited
Read more
Advertising
Continue to the category
Africa