Hair of the wolf 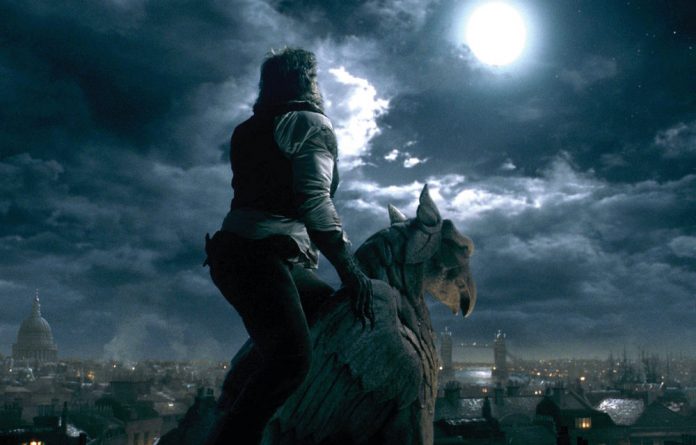 The Wolfman harks back to The Wolf Man of 1941, Universal Studios’ first sound version of the tale, which starred Claude Raines and Lon Chaney Jr in the roles now filled by Anthony Hopkins and Benicio del Toro. Of course, it also echoes the many lycanthropic movies made since then, including one of the best, John Landis’s An American Werewolf in London. This new Wolfman, in fact, could be called A Hispanic-American Werewolf in the English Countryside.

I hope that doesn’t count as a spoiler. There was apparently much secrecy around the making of this film and strict security around its release, but surely if you see the poster for a movie called The Wolfman and you note that it stars Del Toro, you will put two and two together. Once the movie starts, it’s just a matter of waiting for the spectacular transformation.

When it comes, it’s less of a set-piece than Landis’s lupine transformation of his all-American protagonist, but then my memories of that film are now at least 20 years old and I might not be so impressed were I to see it again today. In some ways, special effects have got more, er, special. What is indisputable, though, if we’re going to continue with the comparison, is that Landis’s film was also very funny, and there is precious little to make one laugh in The Wolfman. It takes itself pretty seriously.

Del Toro plays Lawrence Talbot, an actor touring Britain; he was born there, but has lived in “America” most of his life. He’s practically just walked off stage from another Hamlet when he’s told that his brother, who was domiciled at the Talbot family estate, has disappeared. (We the audience saw that in the prelude.) Now Talbot must journey back to his original home, near Blackmoor, which may be in Hampshire. Care is taken to explain that he had been shipped off to America to live with an aunt as a young boy — hence, no doubt, the accent. His mother, too, appears to have been a sultry beauty from down Mexico way, or perhaps it was the Indian subcontinent, so that explains his character’s swarthy countenance.

It doesn’t explain the permanent bags under his eyes. Naturally, being transformed into a werewolf whenever the moon is full and having to rush about hairily all night chomping people and slashing them with your Wolverine-type claws has got to be tiring, and anyone could be forgiven for looking a bit pouchy the next day.

But by that point Talbot has not, it seems, discovered his inner werewolf. He wasn’t prone to sudden outbursts of major hirsuteness or toothiness while in youthful exile in the States, as far as we know. Had he been, there would be little tension in the story, not that there’s much. There certainly wouldn’t be any surprises in terms of self-knowledge for the character when he returns to his ancestral seat and the drama begins.

On arrival at the mansion he is met by his father, Sir John Talbot. This is Hopkins playing another sinister eccentric with consummate actorly skill. He’s got that half-smile, those barely open eyes, that sibilant decadence of voice — he’s wrinkly and twinkly but definitely not just a nice old codger with fond memories of his tour of duty on the Indian subcontinent. It’s as if Hamlet had been outclassed by Claudius.

Also resident at the mansion is the Ophelia, Gwen (Emily Blunt), girlfriend of Lawrence Talbot’s missing brother. Oh, sorry, they didn’t have girlfriends in the 1800s — and this is indeed the 1800s. She must have been his fiancée, though I’m not sure it would have been seemly for her to have a room at her beloved’s family home before marriage. Whatever the case, there she is, half-dead with worry, almost permanently in tears, and soon there too is Lawrence, telling her in words we must have heard a thousand times that he’d never forgive himself if anything bad were to happen to her.

That’s one of the problems with The Wolfman: a script that resorts to cliché whenever a tense verbal interaction is taking place. Watched carefully, if one could stand it, the film would provide an interesting exercise in predicting exactly how any such exchange is going to culminate. You’d probably guess it correctly nine times out of 10.

But then you’d probably guess, too, that the narrative is hardly original and any twists provided by its latest interpreters are themselves going to be variations upon variations of similar things from other movies. At least we are spared the variation provided by Universal in 1943, when the Wolfman met Frankenstein‘s monster in a sort of early horror-movie all-star jam.

The film’s action sequences are at least entertaining, and overall it looks reasonably good in that plastic-gothic way of the computer-generated/-enhanced. It’s going as dark and spooky, of course, and much is indeed dark; but it also tends to have a kind of sheen to it, which sums up the kind of contradiction this sort of movie embodies. It’s a horror movie, and it wants as much gore and scariness as its age restriction (16 in South Africa) will allow, but it also wants the glossy quality of a big Hollywood movie. The Talbot family home is filled with cobwebs, but it seems bereft of grit.

Perhaps that’s why Del Toro looks so lugubrious and so exhausted throughout the film. Is he perhaps allergic to cobwebs? In fairness, his Lawrence Talbot perks up when the moon is full, which it is more frequently than seems probable if you follow the usual lunar cycle (is the time out of joint?). But then on such occasions he sprouts wolf hair all over his face, which will do wonders for those eye bags. No longer, for me, nightly applications of Revitalising Eye Relief by Nivea for Men! Henceforth I seek the bite of the wolfman.