Mad about the hype 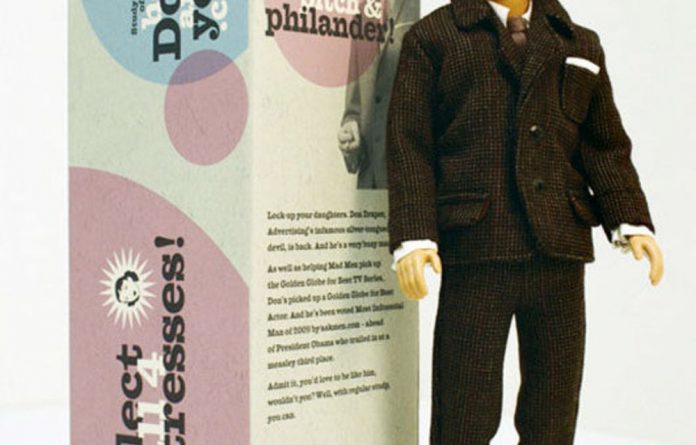 Mad Men, how do we love thee? Let us count the ways (while it is still technically possible), so rapidly are the methods of expressing one’s appreciation for the “Greatest Show on Television Especially in the Opinion of Those Who Never Got Behind The Wire” proliferating.

The tale of the Madison Avenue advertising executives began quietly in the summer of 2007 on United States cable network AMC — its first original drama. The first-season premiere garnered just less than a million viewers. The second got two million and the third got three million — but what fans lack in numbers they have made up for in obsessive devotion.

It is that kind of show. It is aesthetically so pleasing that you want to immerse yourself in it to escape the besetting sartorial, architectural and furnitural (not a word, but should be) sins of the modern age.

Thus it is that vintage clothes shops in New York report that they are being denuded of late 1950s-early 1960s stock by people throwing Mad Men costume parties and idiosyncratic internet shopping sites like etsy.com are now awash with accessories old and new (from genuine 1950s handbags to pillows appliqued with the Manhattan skyline and the Draper silhouette from the opening credits) that channel the Mad Men vibe.

And “proper” shops are getting in on the act too. Last year Bloomingdale’s — where the real Madison men shopped (or at least sent their wives and secretaries to shop for them) — decked out its Third Avenue flagship store windows with Mad Men “treatments” and this year Banana Republic has gone into partnership with AMC to produce a line of MM-inspired clothing (pencil skirts, sheath dresses, headscarves and suits with crisper, cleaner lines than a vodka martini) in advance of season three.

If you want to express your fandom and find, despite the implied promise of chief secretary Joan Holloway’s bodacious behind, a pencil skirt does yours no favours, you can always collect and dress your Mad Men dolls instead. You can download paper dolls and outfits.

Holloway and Don Draper come in bobble-headed form, too, in the US and he can also be found in more standard plastic figurine formation (courtesy of promotional material from DraftFCB in New Zealand), albeit bearing curiously little resemblance to the actor, Jon Hamm, given that Hamm looks exactly like a precision-moulded mannequin brought to life. At least the legend on the box encapsulates the character. “See him drink, pitch and philander!” it promises. “Collect all four mistresses!”

So, you’ve been round the vintage boutiques, squeezed into your girdle, snapped on your garters and decorated the house with life-size cutouts of all your favourite characters. It’s time for your own Mad Men party. Now all you need is guests.

Fortunately, even if your friends have not yet seen the light, you can easily recruit new, better ones on Facebook. A meeting between the members of the groups “What Would Don Draper Do?” and “What Would Joan Holloway Do?” would doubtless make the party go with a swing.

Non-gregarious types will be relieved to know that they can cut out these middle men and go to www.madmenyourself.com instead. With a few clicks of the mouse, you can become a looky-likey avatar. Couldn’t be simpler. Or more frightening, but let’s not dwell.

But, if it’s the substance of Mad Men rather than the style that grabs you, if it’s the delicious script peppered with scabrous silences, the endless subtle evocations of the festering undercurrents and black heart beneath the glamour, the intelligent introspection (as distinct from reality TV navel-gazing), the creeping alienation of one man from another even as the women start to inch towards cohesion, the sudden eruptions of brutality, the gradual marshalling of the forces of mass consumption and commodification that will combine to ruin us all half a century on that you most enjoy, well then the best way to show your appreciation is simply to pour yourself a highball, draw the curtains, switch on the TV and glory in its brilliance.
And don’t waste your energy screaming at Betty. She simply cannot hear you. — © Guardian News & Media 2010